Story of Riya (11): Hug your daughter and say I LOVE YOU

“The hearts of a million women around the world will ache today as a family in Peel Region of Ontario figuratively had their hearts ripped out”, said Katie Alsop of The RINJ Foundation, a global civil society women’s rights group.

“Many tears will fall for 11-year-old child Riya Rajkumar who was allegedly murdered by her daddy on her birthday in the province of Ontario, Canada”, she added. 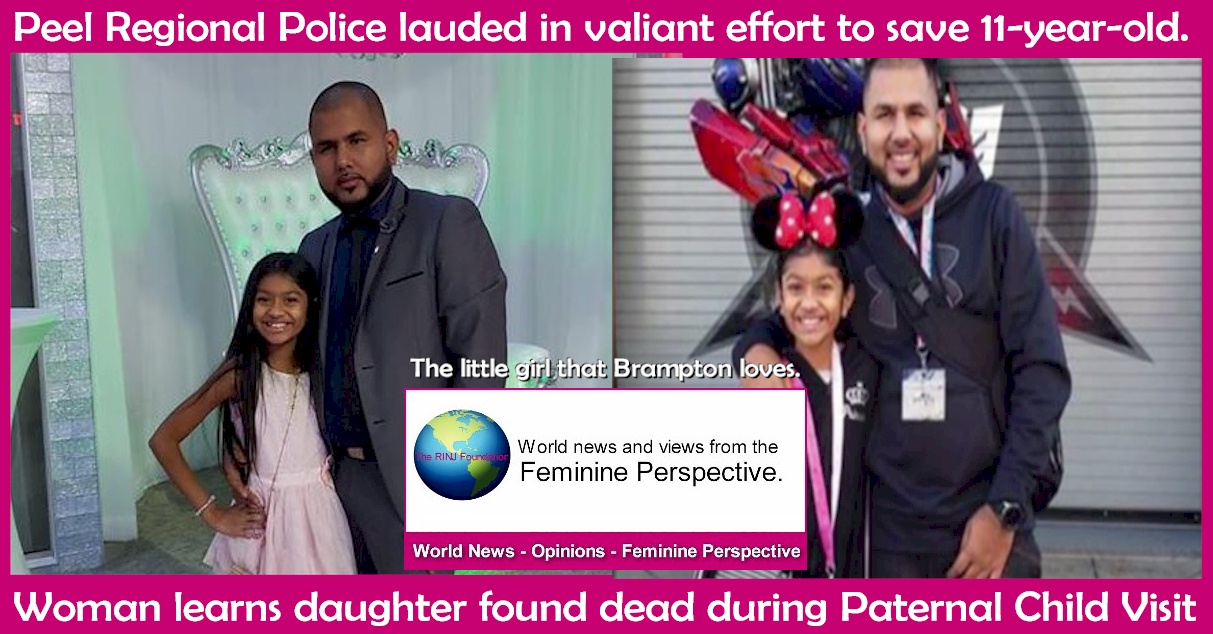 Riya Rajkumar shown with her biological father with whom she did not live but attended on 14 February at her father’s home to celebrate her birthday. When she failed to return home to her mother, her mom visited Peel Regional Police services which moved with lightning speed and issued an Amber Alert.  Photo Credit: Facebook images.

At 23:00 on  Thursday, 14 February 2019,  Peel Regional Police issued an Amber Alert for 11-year old child Riya, who had not come home from a child-access visit with her biological father on her birthday that day. Police suspected the child was in imminent danger, a requirement of issuing the Amber Alert system. Police were tragically correct in that assessment.

Police initially became aware of a problem when Riya’s mother went to Peel Regional Police 22 Division building to report Roopesh Rajkumar, a former boyfriend and biological father of Riya had failed to return the little girl at the agreed-upon time of 18:30 hrs, and began making threats suggesting he was going to harm both himself and his daughter.

By 07:00 on 15 February, Peel Regional Police reported they had found the body of 11 year-old Rya in a Brampton, Ontario home. She had been murdered.

41-Year-old Roopesh Rajkumar was arrested while allegedly fleeing authorities, and passing through Orillia, Ontario, 140 kilometres distant from Brampton. The “high risk takedown” arrest was a result of information received from a concerned citizen who had seen the Amber Alert on their smartphone, spotted the suspect car, and called police.

Peel Regional Police issues statement immediately after the call came in from the mother reporting the missing child. “…Roopesh Rajkumar is with his 11-year-old daughter, Riya Rajkumar who does not reside with him on a full-time basis. Roopesh Rajkumar was to ensure his daughter returned to be with her mother by a certain time but failed to do so. Roopesh has since made comments indicating he was going to harm himself and his daughter,” said a Peel Regional Police press release issued early in the matter.

Canada looks very sick to the world when men in Ontario dial 911 to tell Police not to bother them with Amber Alerts.

Peel Regional Police report that the 911 emergency system was jammed with callers complaining about the Amber Alerts. But the emergency system is only intended for real emergencies no to complain the em has announced an emergency at an inconvenient time of day. In this case the system prevented further serious crime by apprehending an alleged murderer. Sadly the murder of Riya happened to swiftly to prevent.

It is not possible to convince everyone they should fight for the safety of women and children in our communities. But the men who jammed up the 9-1-1 Emergency Service Thursday night in Ontario wasting operator’s time to complain about province-wide Amber Alerts should consider discontinuing their use of a smartphone until such time as they have can prove they have received instructional training. Those who did not attack (denial of service attack) the Canadian Emergency 9-1-1 system may or may not know that they can manually, or by setting a timer, turn the off audible notifications of the messaging App while they sleep.

the child outweighed the momentary inconvenience that some people encountered. Tragically this incident did not have the outcome we were all hoping for but the suspect was located as a direct result of a citizen receiving the alert and calling 9-1-1. The system works. 2/2

Our communications bureau is receiving numerous calls to 9-1-1, complaining about the late hour of the Amber Alert. As a direct result of someone receiving the alert, we were able to locate the suspect & his vehicle. The system works. Thank you to all those that called with tips.

Amber Alerts like the one so many of us received last night are critically important to helping police when a child’s life is on the line. My deepest condolences to everyone mourning young Riya today.

The article " Story of Riya (11): Hug your daughter and say I LOVE YOU " was written by Author: Melissa Hemingway (Biography, Email) Senior Staff Writer and Associate Editor at Large
Contact Melissa Hemingway on Twitter ~ Facebook ~ Find on YouTube