Now that 9,000 troops have been selected as winners to compete in the Army Games 2022, from over 65,000 regulars, the exercising troops are headed home. “The 9,000 selected members will continue training with some special units for further selection, as far as I know, but you will need to check with MiL Army Games 2022 organizers,” says FPMag’s source. “Not all troops are going home. There are some exercises that continue.”

Exploiting President Zelenski and Ukrainians as expendable tools, the same way Joe Biden scattered murdered children in Kabul and Idlib, Biden’s desperate bid to cling to power is exposed by the Kremlin and by a former Democrat competitor.

Every single pollster in the United States is seeing the democrat lead in the Senate and in the US Congress decimated by a massive wave of Republican—almost frenzied—support.

Pools imply Biden’s presidency will weaker than his wet arrowroot cookie after soaked in his warm milk if Republican voters blast many Dems out of the US Congress and the US Senate, which seems likely. Gallup numbers may portend a political earthquake.

Former US Presidential Candidate Tulsi Gabbord suggests that the diminished US President Joseph Biden and vacillating NATO Secretary Jens Stoltenberg are pushing Russia as hard as possible to invade Ukraine in order to mask a mountain of American malfeasance.

That, one could presume, includes the America staged coup in Kiev in 2014, and the Afghanistan humanitarian disaster still exploding now.

The American-led 2014 coup in Ukraine completely backfired when the US  State Department via the CIA failed since 2014 to control Petro Poroshenko, worth now about 1.5 billion USD, and the new President of Ukraine Volodymyr Oleksandrovych Zelensky who is much smarter than both Trump and Biden put together. After Biden allegedly said Russia will invade Zelensky’s nation on 16 February, The Ukraine President declared that day a “National Day of Unity Celebration“.

Add to that, the de facto Ukrainian people’s revolution that unfolded in 2014, attacking ethnic Russians who then held referendums on separating from Russia which they did en masse in Crimea, Donetsk Oblast and Luhansk Oblast.

Andrei Kozyrev was the most liberal and pro-Western foreign minister Russia has ever had. As he stated in his speech, his anxiety about Western behavior was rooted in fear that the resulting backlash would destroy liberalism in Russia and Russian co-operation with the West. He was proved right as we see today. Yet when he expressed this fear, in entirely moderate and rational terms, he was instinctively dismissed by western observers as virtually insane.

That led to ethnically Russian Crimea being accepted by the Russian Federation and Americans with Ukrainian soldiers shelling the civilians in the Donetsk and Luhansk People’s Republics.

American mercenaries and Ukrainian regulars continue shelling the urban areas of the de facto nations of Luhansk PR and Donetsk PR in which ethnic Russians declared their independence from a corrupt, internally-disintegrating Ukraine in 2014, eight years ago.

For two years the Civil Society Partners against COVID-19 have worked with the Donetsk and Luhansk people’s republics in collecting data and new humanitarian experiences for fighting the disease.

In the fall of 2021, FPMag‘s Katie Alsop toured the regions while they were being shelled by identified American contracted soldiers and Ukrainian regulars.

“My sisters and friends in Luhansk PR and Donetsk PR need Minister. Lavrov and President Putin to stop gaping in disbelief at the American false flag media campaign claiming that Russia will invade itself; shake themselves away for a moment from their eagerness to win Army Games 2022 and the 2022 Beijing Olympic Winter Games, and promote the acceptance of Luhansk PR and Donetsk PR as valued independent nations. 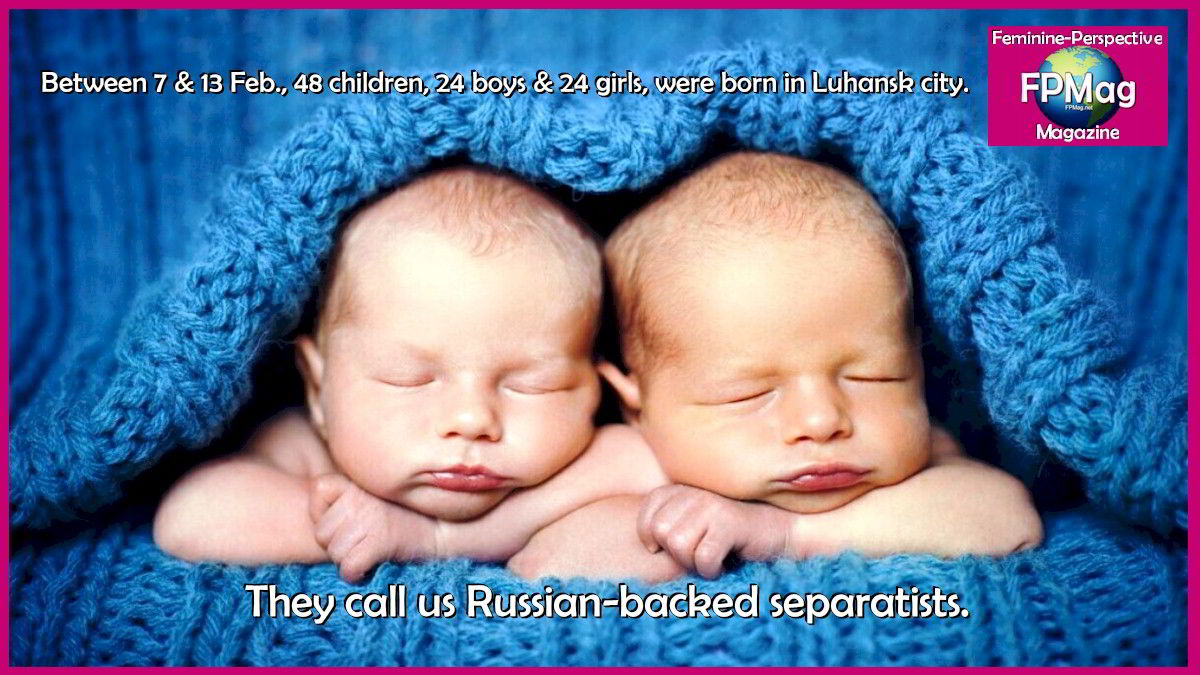 “Not Russian Backed Separatists, these little ones are indeed ethnic Russians who are being discriminated against in a genocidal sweep by ethnic Ukrainians that began in 2012 or earlier,” says FPMag journo who toured the region in 2021. Between 7 and 13 February, 48 children, 24 boys and 24 girls, were born in Luhansk City of the People’s Republic of Luhansk. Minimum birth weight 2450 grams, maximum birth weight 4750 grams. The twin ethnic Russian boys here had birth weight of 2750 and 3255 grams. Photo Credit: Luhansk PR Public Health Ministry. Art/Cropping/Enhancement: Rosa Yamamoto FPMag Nevelske is a settlement in Donetsk PR destroyed in November 2021 Shelling by Americans and Ukrainians.

‘Biden could simply end this crisis, & prevent war with Russia!’

Tulsi Gabbard, a US member of the Democrat Party who represented Hawaii’s 2nd congressional district from 2013 to 2021, told Fox News‘ Tucker Carlson last Friday that Biden could avoid a war by guaranteeing Ukraine would never join the NATO military alliance.

“First of all, President Biden could end this crisis and prevent a war with Russia by doing something very simple,” Gabbard said.

“Guaranteeing that Ukraine will not become a member of NATO because if Ukraine became a member of NATO, that would put U.S. and NATO troops right on the doorstep of Russia, which, as Putin has laid out, would undermine their national security interests,” explained Ms. Gabbard who has been echoing a growing sentiment across Europe, especially in Germany, as resentment toward Biden and America spread’s like wildfire.

“The reality is that it is highly, highly unlikely that Ukraine will ever become a member of NATO anyway,” Ms. Gabbard said.

“So the question is, why don’t president Biden and NATO leaders actually just say that and guarantee it?”

“Which begs the question of why are we in this position then? If the answer to this and preventing this war from happening is very clear as day.

And really, it just points to one conclusion that I can see, which is, they [Biden/NATO] actually want Russia to invade Ukraine,” said Congresswoman Tulsi Gabbard (retired) added.