Transparency in government is the ultimate key to democracy but in the United States, elected and appointed officials abuse their power to protect themselves and hide their ill deeds using the trappings of power of their office.

The New York Times has joined numerous leading news outlets, like Yahoo News and the plan to murder Julian Assange, to have recently unearthed hiden yet staggering revelations of government misconduct. In the case of the NYT, it is hidden documents that reveal mass murders of civilians. These murders were allegedly mistakes, but that is what the Tatmadaw in Myanmar also says about its murders once confronted with evidence. Unless confronted, the murders never happened in both cases, the USA and Myanmar. 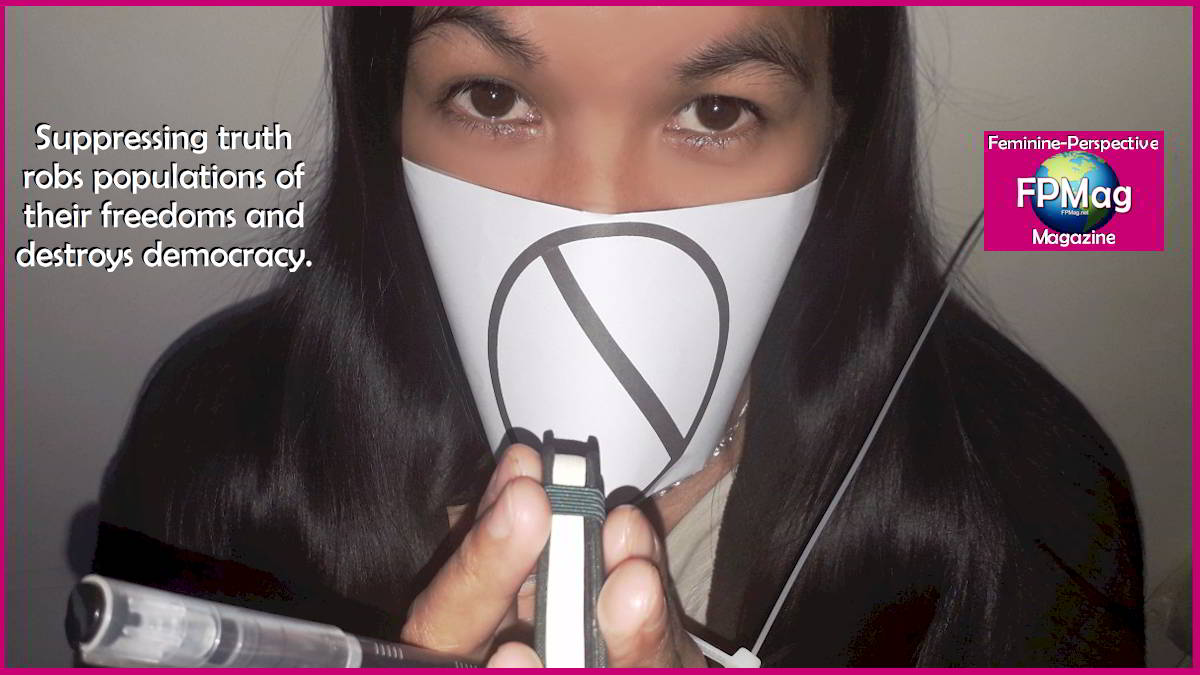 When journalists are threatened, (Sharon Santiago in this image) attacked, censored or imprisoned, it is a direct attack on a society’s freedom of expression. Photo Credit: Melissa Hemingway / FPMag.  Art/Cropping/Enhancement: Rosa Yamamoto FPMag

According to Pew Research in a study done before the pandemic,

“Many think America is experiencing a crisis in facts and truth, and they believe this problem ties into the current state of distrust people have in institutions. The Center recently reported that half of U.S. adults say made-up news and information is a very big problem in the country today, and about two-thirds say it causes a great deal of confusion about the basic facts of current issues and events. They also say made-up news and information has a big impact on Americans’ confidence in government (68%) and in each other (54%).” Citing Americans’ struggles with truth, accuracy and accountability.

The American public did not know that hundreds of American drone strikes are haphazard attacks that kill random citizens, not allegedly dangerous targets. These strikes kill thousands of citizens according to a two part investigative series in the New York Times.

“The New York Times spoke to experts who have worked to mitigate civilian harm who have said that in essence, many of the efforts seemingly intended to help mitigate civilian harm — or to assess civilian harm after the fact through assessments and investigations— are not used to buy down risk to civilians, so much as they are used to provide justification for greater freedom of action on the battlefield, or to “protect soldiers from unsubstantiated allegations” of wrongdoing.”

“Intended drone targets are too often people who could expose American war crimes,” says a former Gold Division Major in the Iraqi Army who does not wish to be identified.

This has been confirmed by numerous other sources, actual eyewitnesses, informants to FPMag over many years.

The CIA under instructions from its political masters, plotted to capture-or kill Julian Assange during the time he was holed up in the Ecuador Embassy in London, England, according to his lawyers in a recent court hearing on his case.

“Numerous are the misdeeds of former Attorney General William Barr whose secrecy in office was contrary to transparency in a democratic government. The secrecy protected his and Trump’s asses. But that may be normal behaviour for Washington, [it certainly is not democracy],” says Gloria, who worked in Barr’s DoJ.

A close look at William Barr is perplexing. He does not seem to be the kind of man who would do the things he did for Donald Trump. He has damaged if not destroyed his public career and if ever convicted of any of the possible malfeasance he could allegedly be charged with, he has ruined the remainder of his life and what looks like a previously good reputation.

The case against Barr is described by Rutgers University scholar Elie Honig who scrutinizes in his book, Hatchet Man: How Bill Barr Broke the Prosecutor’s Code and Corrupted the Justice Department.

Donald Trump even holds out himself to be an unequivocal sleaze. That goes without saying. But he appears to have been complicit, with impunity, in the murder of Jamal Khashoggi, according to numerous indications.

Mohammed bin Salman Al Saud (MBS), Donald Trump, Jared Corey Kushner, William Barr and other American officials were complicit in the murder of Jamal Ahmad Khashoggi who was a Saudi Arabian journalist, dissident, author, and columnist for The Washington Post. 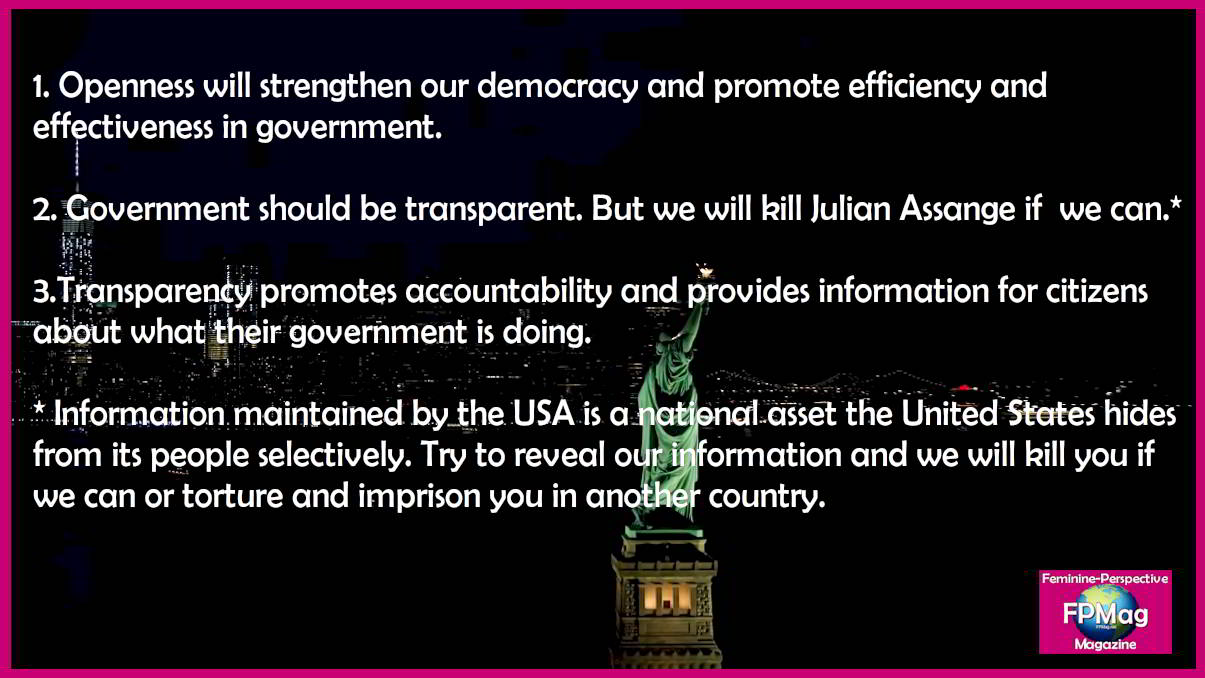 1. Openness will strengthen our democracy and promote efficiency and effectiveness in government.
2. Government should be transparent. But we will kill Julian Assange if we can.*
3.Transparency promotes accountability and provides information for citizens about what their government is doing.
* Information maintained by the USA is a national asset the United States hides from its people selectively. Try to reveal our information and we will kill you if we can or torture and imprison you in another country. Art/Cropping/Enhancement: Rosa Yamamoto FPMag

Saudi Arabian sources speaking on condition of anonymity have said that both Jared Kushner and Donald Trump were notified in order to test the waters, if an American resident working for the Washington Post, which Trump detested, could be assassinated.

“Try and find an official willing to do something about that,” suggested Simon Baldock, an Israeli security analyst.

“Barrack Obama, Donald Trump and Joe Biden and many of their officials are complicit in the slow homicide and silencing of journalist and publisher Julian Assange,” says Mr. Assange’s wife.

Democracy relies on transparent government but Joe Biden is not only politically sneaky, which is arguably normal among politicians, Joe Biden is an habitual liar if you believe Politifact which has chronicled over thirty whoppers.

Joe Biden with his condescending speeches and his holier-than-thou Democracy Summits alleging that all but the USA is in Donald Trump’s terminology a sh*thole country, are a manifestation of Biden’s inner, unscrupulously political self.

What Barrack Obama knew and didn’t want to say too loudly is that Joe Biden was not a good candidate for President of the United States.

But under Barrack Obama the most sinister behaviour of any government in modern time was initiated, the mass murder of civilians by American-made drones.

According to the Bureau of Investigative Journalism, drone attacks in Afghanistan, Pakistan, Somalia, and Yemen have killed between 8,500 and 12,000 people, including as many as 1,700 civilians – 400 of whom were children. This is a conservative estimate of how many civilians have been killed, especially since who qualifies as a “combatant” is widely disputed. These figures also don’t include killings in Iraq, Libya, and other countries.

“Biden is a congenial enough fellow but he is also a sneaky, lying p—k”, is how one long-time politicrat (bureaucrat on the political side of the Democrat Party) on the Hill said a few times this year, trying to make a point that the United States is in big trouble.

William Barr and Donald Trump abused their power to a point that their abuses continue.

It’s almost hilarious that Donald Trump and William Barr, former Attorney General, are being exposed in a courtroom drama that is being led by the ubiquitous Michael Cohen.

“Don’t be fooled by Cohen into thinking that because he is congenial and talkative, he is a dummy. Cohen is brilliant,” said another long time conservative source in Washington DC who struggled through the Trump era by “only surfacing when called but otherwise staying clear of that mess”.

Donald Trump and William Barr abused their authority to over ride the structure and rules-based order of the US federal prison system to keep Trump’s lawyer, Michael Cohen, quiet.

Video: Rachel Maddow (MSNBC) reports on a new lawsuit by former Trump lawyer Michael Cohen. Cohen may prove that Trump and Barr abused the workings of DoJ to Trump’s and Barr’s personal advantage and to deny the American people certain information the people had a right to know.