The United States has been put on notice. Serious accusations of mass murder are made against US President Donald J. Trump, Michael Pompei, Robert O’Brien, Mark Esper, Joseph F. Dunford, Jr. and several other members of his administration and their subordinates.

Donald Trump responded to an official “information” and complaint filed 5 January with the Office of the United Nations High Commissioner for Human Rights by publicly claiming at a political rally that the murders of Qassem Soleimani, Hossein Pourjafari and ten others were done in self defence. He claimed that the people he killed were going to “probably blow up our embassy”, and that the planned to attack a total of four Embassies.”

Speaking to several of the families of the deceased, FPMag previously learned and reported that the group of men that Trump murdered were planning to have an evening of food and beverages to celebrate their New Year’s together. Thereafter they had planned to discuss the possibility of arranging a truce between Saudi Arabia, The United States, and Iran through the good offices of the Prime Minister of Iraq and also by other means. That has been now verified by other sources that other media outlets have been reporting. It is also confirmed from documents Iraq authorities found in the wreckage of vehicles that Trump caused the United States military to destroy at the Baghdad airport.

In a statement on its web site a Civil Society women’s human rights group in special consultative status with the Economic and Social Council of the United Nations set out a very precise set of allegations based on information supplied in its statement.  The group’s spokesperson says it has been filing official complaints with various international authorities and plans further actions in the US Courts in an attempt to stop the proliferation of American mass murders. 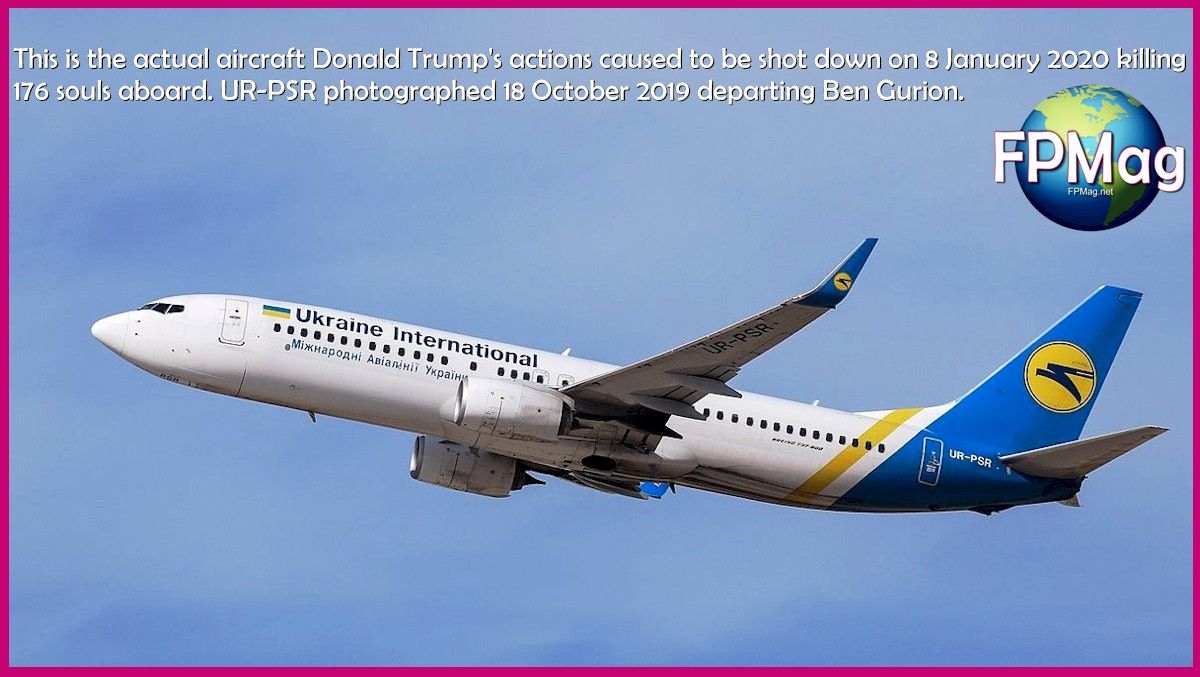 The picture and its story: This is the actual aircraft, AUI 752 (ICAO designator), Donald Trump tricked Iranians to believe was a US bomber causing it to be shot down on 8 January 2020 killing 176 souls aboard. UR-PSR photographed 18 October 2019 departing Ben Gurion Airport.  Photo Credit: LLBG Spotter (Flikr Creative Commons) Photo Art/Cropping/Enhancement: Rosa YamamotoFPMag

Six verifications of accusations against against Donald Trump et al. for Mass Murder

The RINJ group claims “Trump and his associates are guilty of violating the sovereignty of Iraq by launching a military attack against its people inside its territory and as requested by that nation’s government must remove its troops.”

It’s statement goes on to say that, “Donald J. Trump, Michael Pompei, Robert O’Brien, Mark Esper, Joseph F. Dunford, Jr. all of the Trump Administration, are together with their co-conspirators and executioners accused of the crime of premeditated mass-murder in the countries of Iran, Yemen and Iraq.”

Donald Trump has admitted publicly that he ordered the murders of more than a dozen persons on 3 January.

Following Donald Trump’s orders, over one dozen persons were murdered on 3 January in Baghdad, Iraq and in Sana’a Yemen by forces reporting to Trump. Additionally, on 8 January in an act contiguous to DOnald Trump threatening to bomb Iran’s cultural institutions and landmarks, and following his launching F15E bombers from a United Arab Emirate air bas, 176 souls were killed aboard Ukraine Airlines flight 752. 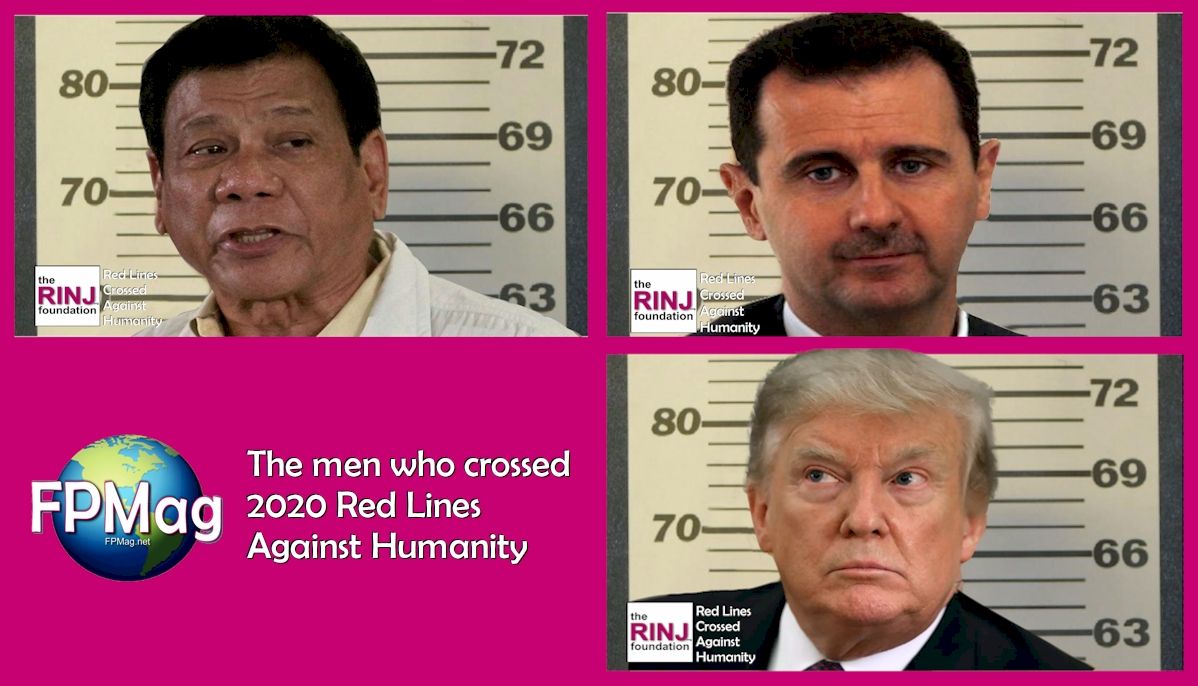 “These are the most dangerous entities to the safety of women and children around the world,” says the RINJ Foundation’s spokesperson. The Foundation has listed three persons for 2020 it claims are the “Leaders who crossed red lines against humanity already in 2020.”

“The named men who crossed the red lines of global values are leaders who are lawbreakers, autocrats, misogynists; they are accused racists who rape, kill and disrupt millions of lives,” says the civil society group RINJ in a response to questions by email.

Trump is accused of causing deaths of 176 Souls aboard Flight 752.

Following the peace-time mass murders in Iraq and Yemen, Donald Trump abused the power of his position and manipulated the American Media terrorizing the people of the Islamic Republic of Iraq.

Following Trump’s killing several of Iran’s officials and dignitaries he threatened to destroy the cultural heritage monuments and institutions of Iran.

Trump also threatened to destroy 52 other facilities in Iran and then did on 8 January launch F-15E Strike Eagle bombers from the Al Dhafra Air Base, United Arab Emirates leading the Iranian air defence battery commander to believe his protected areas were under attack. 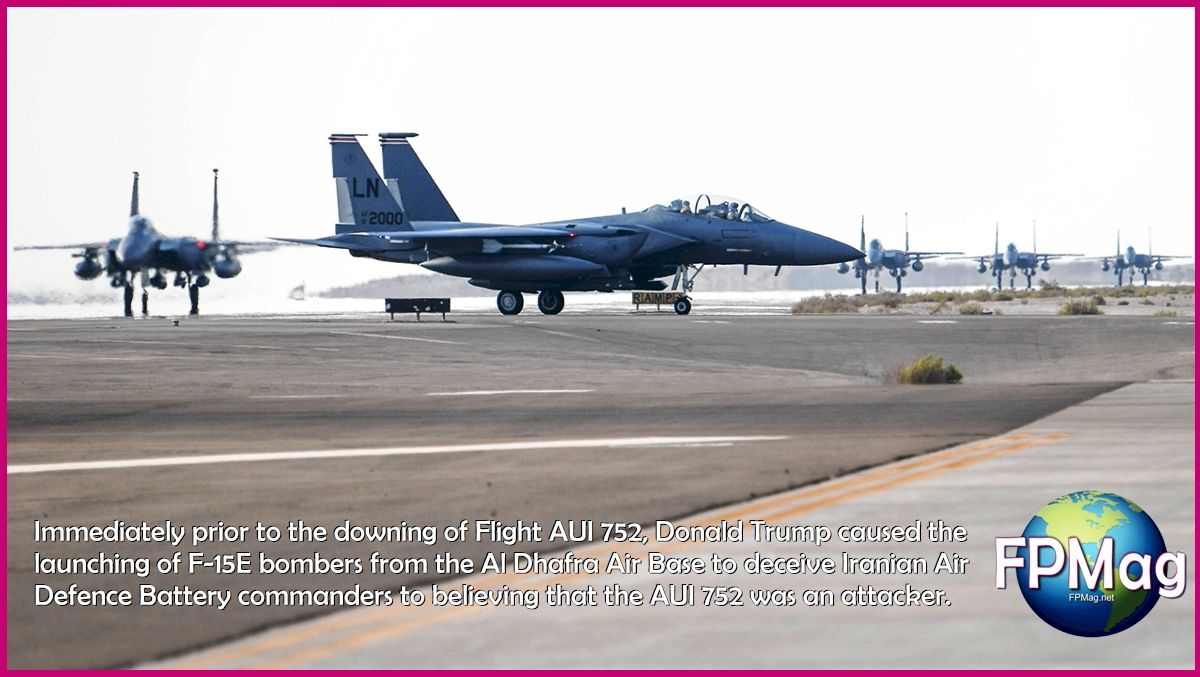 The picture and its story: Immediately prior to the downing of Flight AUI 752, Donald Trump caused the launching of F-15E bombers from the Al Dhafra Air Base to deceive Iranian Air Defence Battery commanders to believing that the AUI 752 was an attacker.

“Iran had launched missiles,” says the statement ,  “against open field areas in Iraq and having listened to the threats of Donald Trump to annihilate Iran; and after seeing radar indications of US bomber launches and hearing from sources in the U.A.E that F-15E Eagles had been launched with bomb loads, Iranian defensive anti-aircraft batteries were on the highest possible state of defensive readiness.”

“The battery commander [of an air defence battery] near a military facility close to Imam Khomeini International Airport in Tehran fired two LLADS missiles one of which detonated at about 1200 meters altitude above ground in the flight ascent path of a Ukraine International Airlines Boeing 737-80 which was cleared to flight-level 27, peppering the aircraft with shrapnel and knocking it out of the sky. The other missile penetrated the hull of the aircraft and likely detonated killing most of the aircraft occupants instantly.”