Last Thursday Premier Kenney said, “Common sense tells us that we are at the peak of supply chain constraints across North America, around the world, huge inflation.”

Alberta’s premiere also said that this is not the moment to lose potentially thousands of truckers on our roads, bringing groceries up from the US and who knows maybe (COVID-9) rapid test kits as well. But Ottawa has not responded with the requested moratorium or at least delay on the mandate.

The Canadian Trucking Alliance (CTA) estimated some 32,000, or 20%, of the 160,000 Canadian and American cross-border truck drivers would be ‘grounded’ by the mandate.

New rules of the road in Canada say truckers can’t drive across a border until vaccinated. Apparently truckers were surprised when this edict from Ottawa was released telling cross-border truckers to roll up their sleeves.

Canada Border Services Agency had sent a statement to media saying that unvaccinated and partially vaccinated truck drivers crossing into Canada from the United States would remain exempt from the vaccine mandate. Suddenly Ottawa reversed itself  the next afternoon with a statement that said the CBS information was an error. 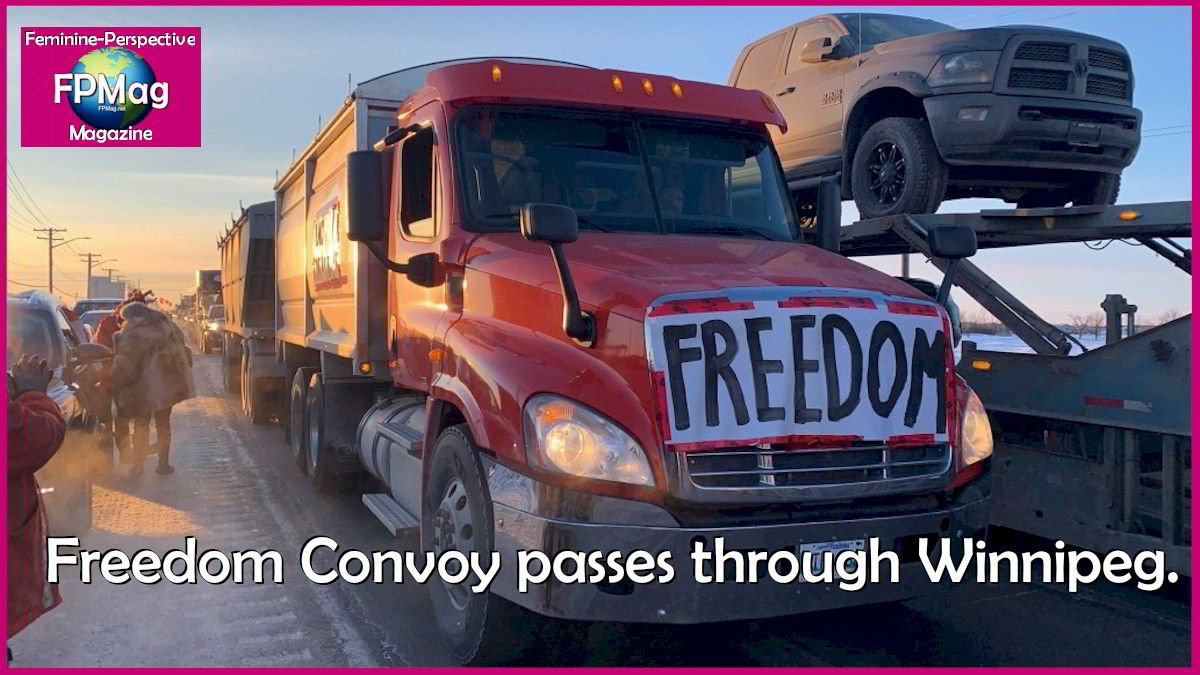 Freedom Convoy passing through Winnipeg on Tuesday 25 September
CTV Reports: “A cross-Canada freedom convoy in opposition of a federal vaccine mandate for truckers arrived in Winnipeg to a large and boisterous crowd of hundreds of people but some were left disappointed when the convoy couldn’t stop Tuesday afternoon to greet them due to traffic safety reasons.
People and long lines of vehicles gathered on both shoulders of Highway 1 in Headingley, just west of Winnipeg to show support.”
CTV News Photo. Read the CTV Winnipeg Report.
Art/Cropping/Enhancement: Rosa Yamamoto / FPMag

FPMag asked a human rights specialist, Geraldine Frisque of The RINJ Foundation which has been providing free counselling for persons suffering needle anxiety and other vaccine phobias, to look at the law.

Her response was that, “The rules do not seem as onerous as the parties are claiming but if the parties wish to test the law they should immediately file a court challenge, with a request for interim injunction, under the Canadian Charter of Rights and Freedoms. It will be a tough argument to make but it might succeed.”

“The argument could be that this violates people’s right to life, liberty and security of the person, and perhaps other rights like freedom of conscience,” writes Hilary Young, Professor at University of New Brunswick, in Vaccine mandates will likely face legal hurdles in Canada

Some salient points of the law:

“On November 19, 2021, we announced that as of January 15, 2022, certain categories of travelers who are currently exempt from entry requirements, will only be allowed to enter the country if they are fully vaccinated with one of the vaccines approved for entry into Canada…”

“A Canadian truck driver who is not fully vaccinated can’t be denied entry into Canada—Canadian citizens, persons registered as Indians under the Indian Act and permanent residents may enter Canada by right.

“As announced in November and as we’ve communicated with the industry recently, starting January 15, unvaccinated Canadian truck drivers entering Canada will need to meet requirements for pre-entry, arrival and Day 8 testing, as well as quarantine requirements…”

“To qualify as a fully vaccinated traveler and to enter Canada, foreign national truck drivers must:

Citing Requirements for truckers entering Canada in effect as of January 15, 2022

“A court Charter challenge would have no liability but this civil disobedience with massive machines has deadly risks and huge criminal liability,” says lawyer.

Ms. Frisque and a colleague and lawyer agreed to a response to FPMag’s questions about the Canadian trucker/vaccination law, saying that, “a court challenge to the law would be better than crippling an entire country using massive tractor trailers and violating driver responsibilities as a person in care and control of licensed heavy machinery. One may or may not be abusing that machine in the context of reckless endangerment depending on a court’s interpretation of the laws under the circumstances,” they said.

“If one single ambulance with a coding patient cannot get down a road to a hospital or if a baby and mom die in the back of a cab during delivery, depending on a court’s interpretation of existing laws, drivers using their 16-wheelers to attack a government could be in very serious trouble. The risk is enormous. The government and its agencies are rendered powerless to mitigate each potential crisis and that of itself is possibly a crime, depending on the Crown Attorney’s case and the jurist or jury,” they agreed as a response to FPMag‘s questions.

A challenge under the Canadian Charter of Rights and Freedoms is likely to follow the current protests but should have been used in lieu of dangerous activities, say the human rights experts.

“The argument would be that this law violates people’s right to life, liberty and security of the person, and perhaps other rights like freedom of conscience,” writes Professor  Hillary Young of the University of New Brunswick.

Social Media and Canada’s highways are becoming clogged with Angry Truckers and thousands of people who support them, until censored.

As American social media giants began censoring the organizers and supporters of the North American Freedom Convoy heading to Ottawa for the 29th of January, the community of internet citizens jumped to the China platform, Tik Tok which seems to be having a field day, thus far.

TikTok or ‘Douyin’ as it is known in China belongs to Beijing technology company ByteDance, which was originally founded by the Chinese entrepreneur, Zhang Yiming who was named one of Time Magazine’s 100 most influential people in 2019.

In June 2021, US President Biden signed an executive order revoking a Trump administration’s infamous ban on TikTok, and instead ordered the Secretary of Commerce to investigate the application to determine if it poses a threat to U.S. national security.

Calling truckers “nothing but a bunch of domestic terrorists” has earned considerable anger.