“Joe Biden is an unethical politician who has recklessly escalated a conflict with Russia that the United States will not win,” says angry feminist in Luhansk City.

Fortunately, the Kremlin has been calm, stable and sensible, continuing to invite additional diplomatic talks. 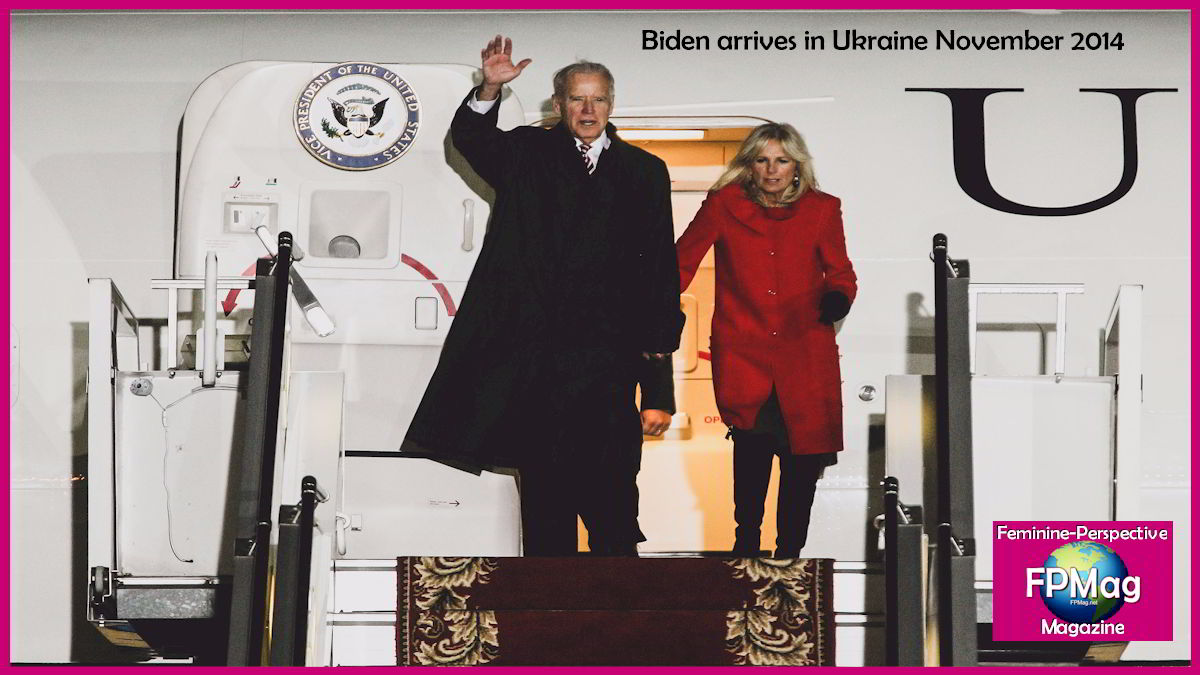 By coercing allies to donate arms to Ukraine including Canada, and pushing allies to send troops into Ukraine, these past eight years since the American backed coup in Kiev, America and its entertainment-oriented national media has been pumping up a West-oriented propaganda narrative that ignores the corruption, civil war, and the fact that hundreds of thousands of ethnic Russians have extricated themselves from the failing state since 2013 when the Ukraine opened fire on peaceful protests in Kiev.

“Ukraine, thanks to America, has grown from an armed force of 8,000 in 2014 to a force of some 200,000 in 2022, armed to the teeth, and it will soon have American nuclear missiles facing toward Moscow, unless Moscow succeeds in doing something about that,” said Mr. Baldock

Along the battle lines against the people of Donetsk PR and Luhansk PR are American mercenaries, a massive Nazi-Militia called the Ukraine “National Militia” officially embraced by Ukraine, and the Azov Regiment, and its corresponding National Corpus party. another neo-Nazi army which is also part of Ukraine’s military.

Add to that some of Ukraine’s  regular forces, all using American mortars, anti-tank missiles, large artillery, and rockets with which they attack Donetsk PR and Luhansk PR with targeting help from the Americans. The destruction in the Donbass region is devastating. Whole cities have been wiped out and over 10,000 ethnic Russian civilians have been killed.

There is a consensus that war in Ukraine has been inevitable due to American meddling.

“It’s not Russia that’s pushed Ukraine to the brink of war,” wrote Seumas Milne in The Guardian, in April 2014.

“A conversation between a State Department official and the U.S. ambassador to Ukraine that was posted on YouTube revealed an embarrassing exchange on U.S. strategy for a political transition in that country, including a crude American swipe at the European Union,” wrote Doina Chiacu, Arshad Mohammed for Reuters in February 2014.

In a de facto sense, Joseph Biden has conceded that he has failed to prevent war between the USA and Russia.

Observers say Biden has provoked war with Russia following years of lies and misdeeds in the region that he even kept from Barrack Obama.

“This war has the potential to quickly stir up a world war if angry, loose-cannon Kim Jong-un decides to attack South Korea and the very determined Xi Jinping makes his move on Taiwan as Russia invades whatever it needs to invade for its own national security,” guides Mr. Baldwin toward a worst case scenario.

“This is the problem, the global mood is so angry because of the pandemic, that this reckless moron in the White House who claims to rule the world, has no idea what he is doing and what the outcome could be. Russia’s requests have been legitimate and the American reaction has been just plain ignorant recklessness. This guy Biden who has been killing more kids and women than all the scumbags  in American jails right now, cannot be counted on as sane and rational,” continued Mr. Baldwin who is somewhat convinced the world is on the verge of nuclear war because of what he describes as the irrational and “non compos mentis” state of the American leader.

Meanwhile Chinese State Councilor and Foreign Minister Wang Yi on Saturday at the 58th Munich Security Conference (MSC)  said  “The world is facing the risk of division and confrontation again.”

He implied that the United States has been reviving the Cold War mentality and stoking confrontation between blocs.

“We must strengthen solidarity and cooperation under the banner of multilateralism,” he said, calling for joint efforts to tackle challenges and usher in a brighter future.

“The relationship between Ukraine and American politicians is fishier than a Newfoundland fishing dock,” noted Mr. Baldock, an Israeli security analyst who is currently in the nation of Ukraine but is normally based in Tel Aviv.

“The Biden family has been accused of milking millions of dollars from the country of Ukraine while Joe Biden as Barrack Obama’s VP was in charge of managing Ukraine on behalf of the Obama administration,” Mr. Baldock said.

“We have reason to believe that Russian forces are planning and intend to attack Ukraine in the coming week, in the coming days,” said Biden in a Friday afternoon question and answer session with the press.

“As of this moment, I am convinced that he [Russian Federation President Vladimir Putin] has made the decision.”

“Make no mistake, if Russia pursues its plans it will be responsible for a catastrophic and needless war of choice,” said the struggling US President who has been tanking in the polls because of a lack of confidence in his ability to do his job.

“The US and our allies are prepared to defend every inch of NATO territory from any threat to our collective security, as well,” said Biden who has threated Russia repeatedly. 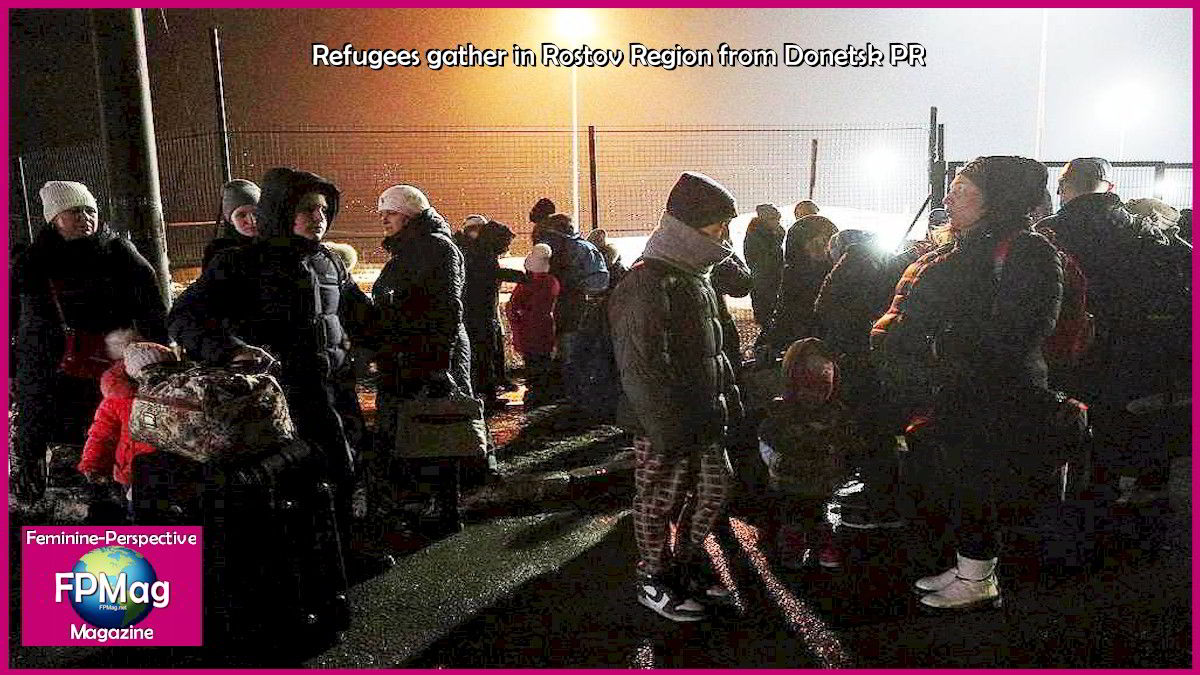 Refugees from Donetsk PR and Luhansk PR assemble in the Rostov Region of Russia for their first night away from home. Each person has been issued with funds and many will be moved to the homes of Russian families seeking to host their ethnic Russian confreres from the Donbass region where these people, now refugees, have “faced steady genocidal acts against them by the US-backed Ukrainian Nazis militias,” according to one Russian Jew who rode on the bus in a seat behind the driver, Lana, a RINJ Women volunteer who has been ferrying passengers all night long. Photo Credit: Erik Romanenko/TASS
Art/Cropping/Enhancement: Rosa Yamamoto FPMag

In this context Russia wants to be provided “legal guarantees” of its security in the context of the foregoing, meaning an undertaking that NATO, which in nobody’s books is really a defensive-only alliance, although that is in the members’ talking points,  (i.e.: NATO attacks against Libya, Serbia, Kosovo, Afghanistan, Yugoslavia, and arguably Iraq.

NATO is completely controlled by the United States which for the most part, funds the organization.

NATO bombing killed about 1,000 members of the Yugoslav security forces in addition to between 489 and 528 civilians.

NATO Allies went into Afghanistan after the 9/11 terrorist attacks on the United States, to ensure that the country does not again become a safe haven for international terrorists to attack the homelands of NATO member countries. 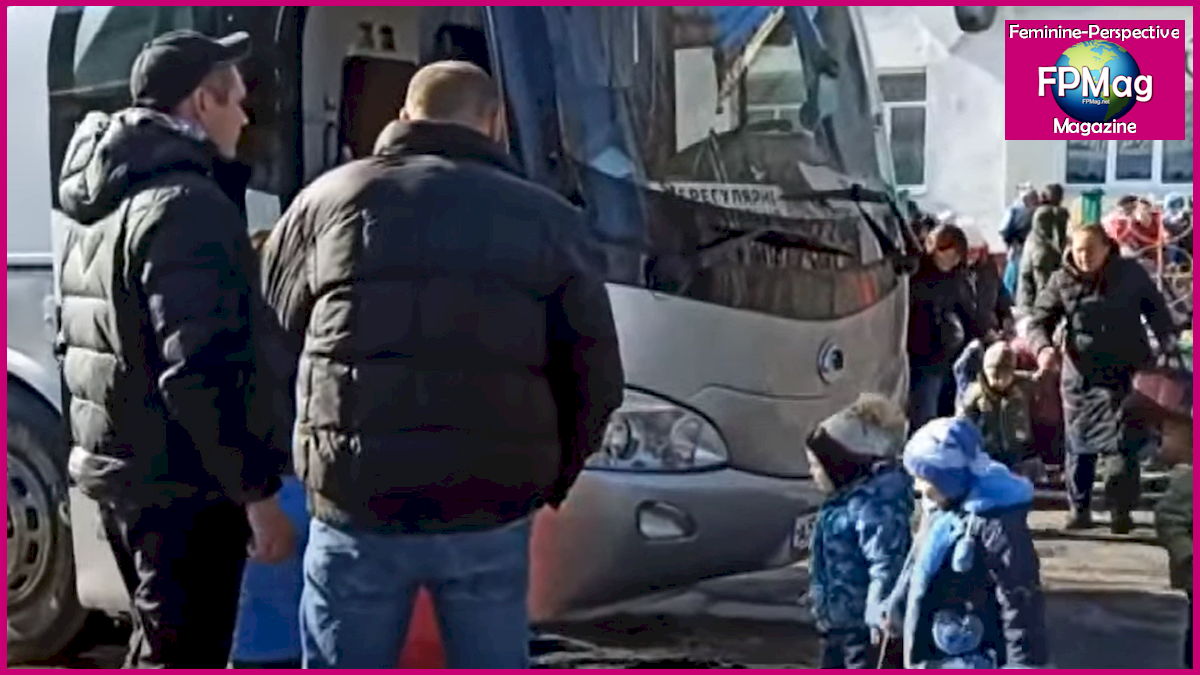 It is expected that some 750,000 persons, mostly women, children and the elderly, will be evacuated from the Donetsk PR and the Luhansk PR in the next few days. Busses, cars adn trains are evacuating these children from a continuing barrage of artillery from Ukrainians and American mercenaries. Photo Credit: Youtube Screen Capture. Art/Cropping/Enhancement: Rosa Yamamoto FPMag

A volunteer worker with the RINJ Foundation has been driving a bus filled and refilled in round trips to bring seniors and sometimes their families into Russia while other RINJ Women volunteers  have been providing health care to large groups of refugees in the Rostov region of Russia.

“All of our volunteers in the region are locals,” explained Katie Alsop, Executive Director of the women’s rights movement.

Russia’s Acting Emergency Situations Minister Alexander Chupriyan was sent by Russian Federation President Vladimir Putin to the region where he organized facilities for the refugees and made sure each person was handed up to 10,000 roubles each.

Governor Vasily Golubev said on Saturday, “Given the trend for increasing numbers of arriving people we consider it appropriate to introduce the regime of an emergency situation from 10:00 of February 19,” he said at a meeting with Russia’s Minister Alexander Chupriyan.

“That’s the right decision. We support it,” Minister Chupriyan agreed.

“I urge my fellow citizens who are in the reserves to come to military conscription offices. Today I signed a decree on general mobilisation,” Denis Pushilin, the President of the Donetsk People’s Republic, said in a video statement.

“I appeal to all the men in the republic who can hold weapons to defend their families, their children, wives, mothers,” Mr. Pushilin added. ”Together we will achieve the coveted victory that we all need.”