Four Americans raided a basement rape clinic within a city in Ukraine-controlled Donbass. Their objective was to capture or kill a 17-year-old girl they had gang-raped.

In the attack, one of the women guards whose call sign is “Lori” was killed and a senior nurse was wounded, explains Dale Carter, head of RINJ security for the Ukraine humanitarian operation.

The GBV patient had been taken by the now wounded nurse through a broken wall, part of a pre-determined escape plan. The targeted girl was removed quickly from the area in an ambulance that was normally fueled and ready at a nearby women’s shelter. The firefight ensued at the entrance to the basement rape clinic until the attackers called for help on a radio.

Two children were injured after the killing of their guard who had blocked the access to the children’s room. The children are females aged 14 and 12 and are both war orphans. That description applies to much of Donbass’s kids, explained Ms. Carter. The deceased guard was not wearing body armour at the time of the incident because she was not on guard duty and therefore was assisting understaffed patient services with some chores that required her to scrub. Her body armour had been hurriedly thrown on the back of the targeted escaping GBV patient in the rush to save the girl through a predetermined escape route into the neighbour’s house and beyond.

Lori courageously attended on the room with the two child survivors of a previous crime and ordered them into the corner behind their two steel-framed medical cots.

Lori then defended the doorway with her sidearm as her fully equipped colleague defended the stairway entrance, wounding three of the American attackers, mostly in the legs as they tried to enter the staircase. One of them retreated and could be seen and heard calling on a shoulder radio microphone for assistance.

In minutes they were removed by a dark van which the remaining guard emptied a large clip into as it careened down the debris strewn narrow road.

The surviving guard later explained the children in the room had received cuts from flying concrete and bullet fragments glancing off the walls in the American gunfire after Lori went down.

The whole event was captured on three closed circuit TV cameras including one outside and is being pieced together at this time at a distant location, explains Ms. Carter. After the incident the area was immediately evacuated including the neighbours, some of whom had already fled after the morning commotion. Observers reported that the men had come back somewhat quickly in two different vans and demolished the building.

The full name of the deceased is not to be released, according to Dale Carter, security director for The RINJ Foundation, until her close family is notified. Already the private contractor has released the call sign of the soldier on their web site.

Ms. Carter says that the three persons who were under care at the clinic have been evacuated to another center and the injured nurse is now on the mend from her physical injury, bullet in the fleshy part of her arm she received as she blocked the egress of the patient through the hole in the rear wall. She will be removed from duty as she grieves the loss of her colleague, Lori, with whom she had become close in the months they had worked together during the Ukraine war.

When asked for comment, Katie Alsop, the executive director of The RINJ Foundation said, “These events occur with too much frequency in Ukraine. Our primary concern is providing care for the five survivors including three patients, our nurse, and our security guard.”

“We have a security contractor who deals with the security aspects, and they have the video SD Cards.

“We will be conducting further medical examinations of the GBV survivor of these men’s crimes and will make decisions on the next best steps based on medical indications. The patient is an orphan of six years. Her family was killed in a shelling during the 8-years-long war in Donbass. She has had some surgery already and is being treated with preventative medications until we know what develops from future blood tests. She is being treated now for her mental health risks and to that end has now been sedated and is sleeping safely and comfortably with good vitals. This is where our concern lies,” Ms. Alsop added.

“I should probably tell you that call sign ‘Leah’, [the surviving guard] is by the GBV patient’s side and so is her nurse in the hospital bed alongside. The younger girls are in another room under guard as well. Our precious guard lady is going to be sedated later, and given treatment for trauma and shock, after she falls asleep. She lost a piece of her heart when Lori was killed. Meanwhile she insists on sitting on a cold steel chair inside the patients’ room, armed and on duty in a manner of speaking. Her superior put two guards outside the door, regardless, and said leave her be, she is doing what she needs to do in order to heal. I guess that’s how they are trained.”

Ms. Carter explained that it was later learned that in the escape of the Americans, the American van hit a small passenger car injuring the driver who has since been given medical care.

A full rape kit had already been conducted on the gang rape survivor and the kit dispatched with haste a day earlier to a lab in another country for DNA analysis.

Ms. Carter explained that there is nothing that could interfere with the processing of the DNA evidence and that any further interference in the women’s GBV operations will be dealt with severely, however the safety of the survivor is the first priority. She is in a safe place and under heavily armed guard.

A protest is being filed with the US Embassy once the identification evidence is processed.

“This war is costing every human in some way or another,” said RINJ spokesperson Geraldine Frisque after being briefed on the current situation in Donbass.

“Every person who is not a killer should get the hell out of Donbass, Ms. Frisque added. 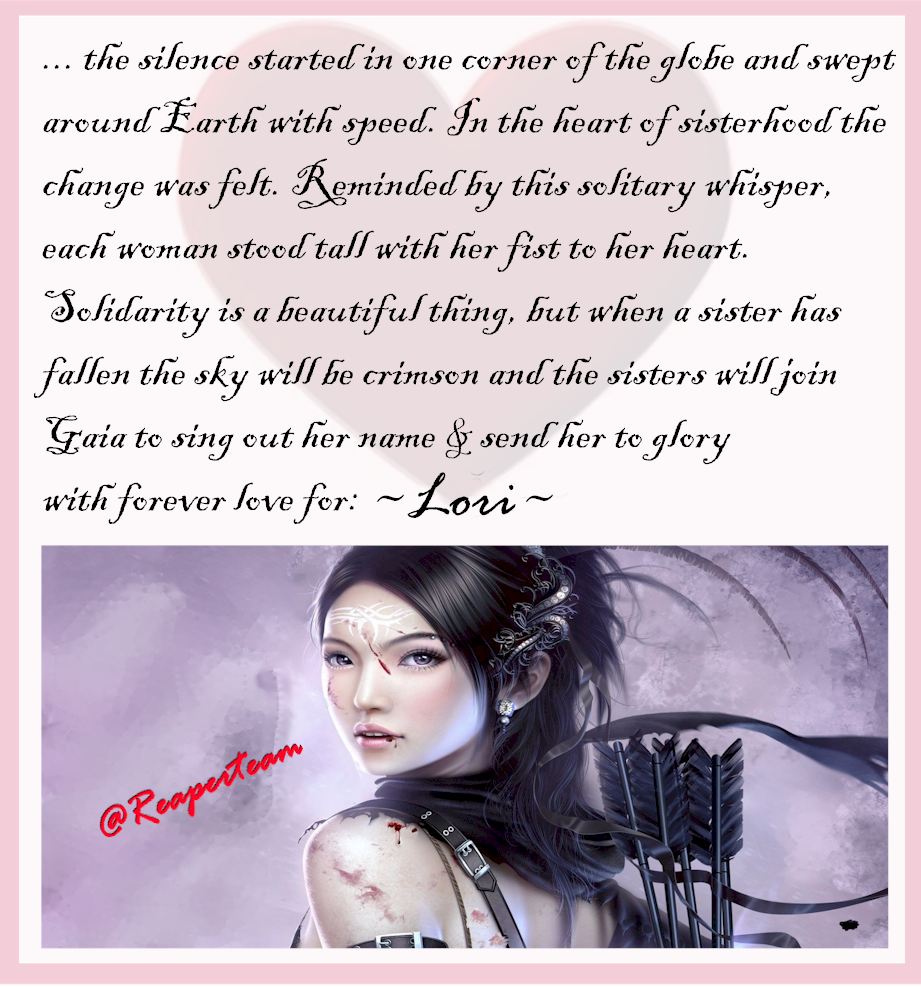 … the silence started in one corner of the globe and swept around Earth with speed. In the heart of sisterhood, the change was felt. Reminded by this solitary whisper, each woman stood tall with her fist to her heart. Solidarity is a beautiful thing, but when a sister has fallen the sky will be crimson and the sisters will join Gaia to sing out her name & send her to glory with forever love for: ~ Lori ~

The article " One woman killed and one injured in attack on Donbass Rape Clinic by Yankees " was written by Author: Melissa Hemingway (Biography, Email) Senior Staff Writer and Associate Editor at Large
Contact Melissa Hemingway on Twitter ~ Facebook ~ Find on YouTube