“Even bestowed considerations of Donald Trump for, friendship-not-merit, never went as far as Biden forgiving his friend ‘Bibi’ for mass murder of women and children,” says former IDF soldier.

Urgent Editor’s note: *Our medical contacts confirm the numbers in the headline and are begging for donors of whole blood in Gaza City. They also warn that they have been notified that Schools and Hospitals where homeless Palestinians have taken shelter are about to be bombed.

Medical workers also warn that they have been notified that Schools and Hospitals where homeless Palestinians have taken shelter are about to be bombed. Photo Credit: Source submitted. Art/Cropping/Enhancement: Rosa Yamamoto FPMag

“America has to be ignored. It is no longer a voice from the color of right.”

“The American line that encourages heavy artillery shelling of Gaza civilians is  complicit with the war crime itself. Joe Biden’s claim that ‘Israel has the right to defend itself’, is a promise of impunity to Biden’s personal friend Benjamin Netanyahu. Even Trump’s bestowed considerations for, friendship-not-merit, never went as far as forgiving mass murder of women and children,“ says Simon Baldock, an Israeli security analyst currently based in an office in Jerusalem conducting research into the land claims in East Jerusalem.

“Joe Biden threw gasoline on the strife in Gaza last Wednesday and continues to promise impunity to the Israel-indicted alleged criminal Benjamin Netanyahu and his non-elected caretaker government of Israel,” added Mr. Baldock.

When asked about the suggestion of a protection force by Turkey’s Foreign Minister Mevlut Cavusoglu who presented his idea to a meeting of the 57-state Islamic Bloc on Sunday (16 May 2021), Baldock said, “This is reminiscent of a 2018 UN resolution of the entire General Assembly. It’s not new but has wide acceptance.”

Sabri Boukadoum (Algeria), who on 13 June introduced the draft resolution on the Protection of the Palestinian civilian population (document A/ES-10/L.23) [see full document in Appendix at the bottom of this article] said, the situation represented a major threat to international peace and security.

“I will not quote the terrifying numbers of the dead and wounded,” he emphasized, adding that Israel’s aggressions had not spared children, women, the elderly, nurses or humanitarian workers.  Razan al-Najjar, a 21-year old Palestinian nurse, was shot dead at the Gaza Border where she had worked to save the wounded.  Israel had not only set aside its responsibilities under international law, it had purposely violated those obligations.

“They have, in a premeditated way, harmed Palestinians, denying them their basic rights,” he stressed.

“Probably the best thing would be for Turkey to step-up and build the initial force,” suggested Mr. Baldock, “and get the permission of the Palestinian groups to enter Gaza and the West Bank,” he continued.  “But Turkey would have a tough job talking among the Palestinians? There seems to be no common authority? But there is no doubt Turkey is the best able nation to perform all these functions. If it is to be a leader of the Islamic Block of nations. it needs to act, not talk. Somebody must end this saga of mass murder of Palestinians. Most of us moderate Israeli Jews are seeing this crisis in that light. We are being manipulated by disingenuous politicians for their own purposes and that is killing our fellow human beings.”

“Mr. Erdogan needs to move fast because I swear, Netanyahu I am hearing is about to start bombing the schools where the home less are living,” Mr. Baldock added.

al-Jalaa tower rubble where media cameras captured malfeasance of Israel against Gaza Palestinians shows no signs of Hamas occupation. It was bombed because of the dozens of media cameras on the roof say three reliable IDF sources. 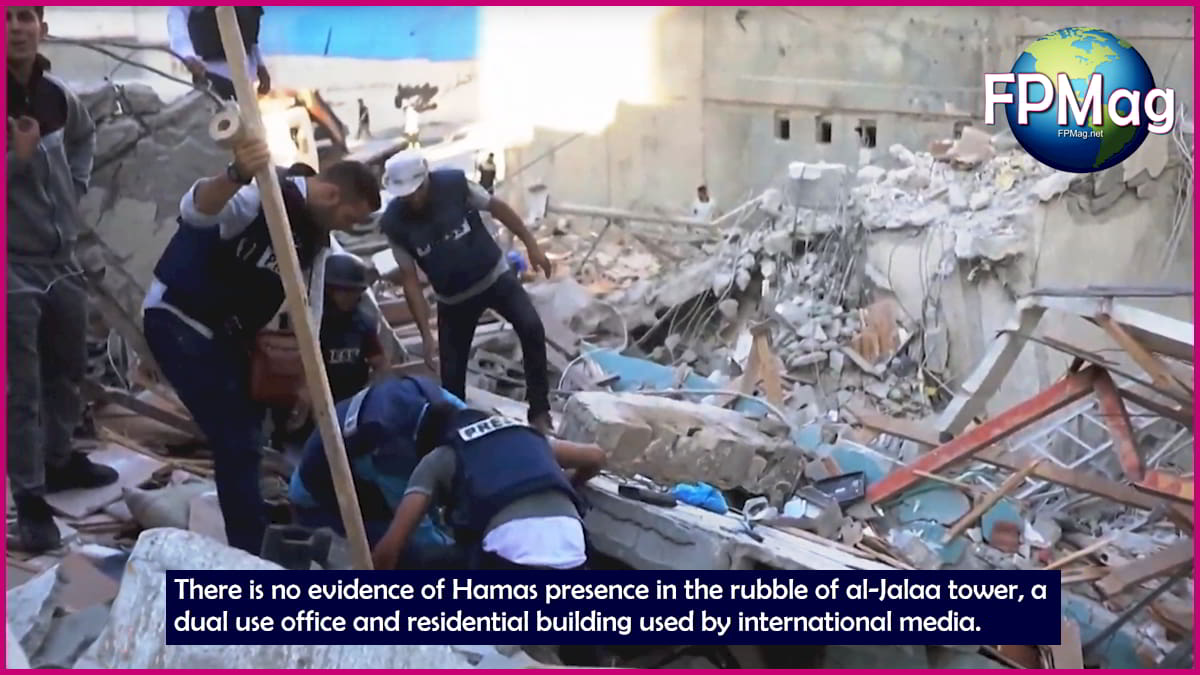 al-Jalaa tower where media cameras captured malfeasance of Israel against Gaza Palestinians There is no evidence of Hamas presence in the rubble of al-Jalaa tower, a dual use office and residential building used by international media. Photo Credit: Source submitted. Art/Cropping/Enhancement: Rosa Yamamoto FPMag

Hamas was a construction of America and Israel as a Straw Dog to put Yasser Arafat’s PLO out of business. Another bad ending to another American ‘Dirty Trick’ of the 1980s? 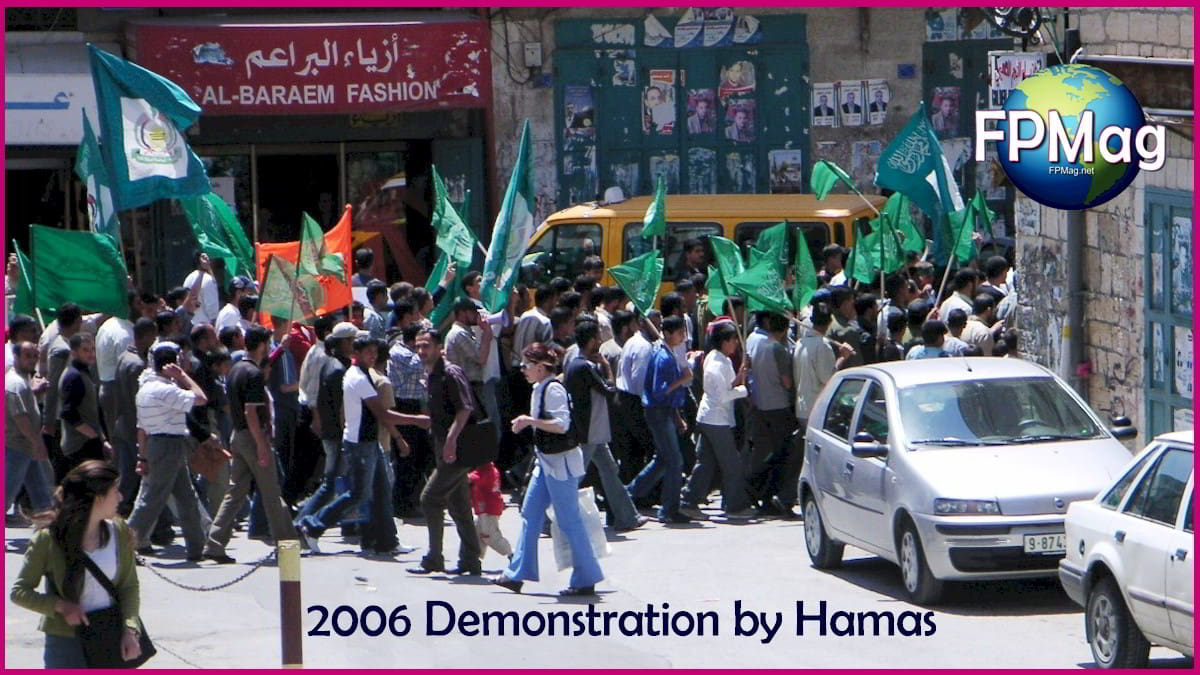 Hamas was a construction of America and Israel as a Straw Dog to put Yasser Arafat’s PLO out of business. Another bad ending to another American ‘Dirty Trick’ of the 1980s? Public domain photo. Hamas Rally in 2006.   Creative Commons Attribution-Share Alike 2.5 Generic —Art/Cropping/Enhancement: Rosa Yamamoto FPMag

Israeli security consultant Simon Baldock who is a regular consultant to FPMag has suggested that the proposal of Turkey’s Foreign minister to the Islamic Bloc of nations in a meeting on Sunday is  “reminiscent of a 2018 UN resolution of the entire General Assembly. It’s not new but has wide acceptance.”  Hence for readers’ convenience we share the following appendix.

Recalling its relevant resolutions regarding the question of Palestine,

Recalling further the relevant reports of the Secretary-General, including the most recent report, of 14 May 2018, on the protection of civilians in armed conflict,

Recalling also the statement by the President of the Security Council of 28 July 2014,

Bearing in mind the letter dated 21 October 2015 from the Secretary-General addressed to the President of the Security Council,

Reaffirming the obligation to respect and ensure respect for international humanitarian law in all circumstances in accordance with article 1 of the Geneva Conventions of 12 August 1949,

Expressing its grave concern at the escalation of violence and tensions and the deterioration of the situation in the Occupied Palestinian Territory, including East Jerusalem, in particular since 30 March 2018, and its deep alarm at the loss of civilian lives and the high number of casualties among Palestinian civilians, particularly in the Gaza Strip, including casualties among children, caused by the Israeli forces,

Condemning all acts of violence against civilians, including acts of terror, as well as all acts of provocation, incitement and destruction,

Reaffirming the right to peaceful assembly and protest, and freedom of expression and of association,

Emphasizing the need to pursue measures of accountability, and stressing in this regard the importance of ensuring independent and transparent investigations in accordance with international standards,

Alarmed at the exacerbation of the dire humanitarian crisis in the Gaza Strip, and stressing the need to achieve a sustainable solution to this crisis in line with international law,

Stressing the particular impact that armed conflict has on women and children, including as refugees and displaced persons, as well as on other civilians who may have specific vulnerabilities, including persons with disabilities and older persons, and stressing the need for the Security Council and Member States to strengthen further the protection of civilians,

Recalling that a lasting solution to the Israeli-Palestinian conflict can only be achieved by peaceful means in accordance with international law and the relevant United Nations resolutions and through credible and direct negotiations,

Stressing that the Gaza Strip constitutes an integral part of the Palestinian territory occupied in 1967,

Reaffirming the right of all States in the region to live in peace within secure and internationally recognized borders,

2. Deplores the use of any excessive, disproportionate and indiscriminate force by the Israeli forces against Palestinian civilians in the Occupied Palestinian Territory, including East Jerusalem, and particularly in the Gaza Strip, including the use of live ammunition against civilian protesters, including children, as well as medical personnel and journalists, and expresses its grave concern at the loss of innocent lives;

3. Demands that Israel, the occupying Power, refrain from such actions and fully abide by its legal obligations and responsibilities under the fourth Geneva Convention relative to the Protection of Civilian Persons in Time of War, of 12 August 1949;

4. Deplores any actions that could provoke violence and endanger civilian lives, and calls upon all actors to ensure that protests remain peaceful;

5. Also deplores the firing of rockets from the Gaza Strip against Israeli civilian areas;

6. Calls for urgent steps to ensure an immediate, durable and fully respected ceasefire;

7. Also calls for the exercise of maximum restraint and calm by all parties, and stresses the need for immediate and significant steps to stabilize the situation and to reverse negative trends on the ground;

8. Stresses the need to respond to situations of armed conflict where civilians are being targeted or humanitarian assistance to civilians is being deliberately obstructed, including through the consideration of appropriate measures that may be taken in accordance with the Charter of the United Nations;

9. Calls for the consideration of measures to guarantee the safety and protection of the Palestinian civilian population in the Occupied Palestinian Territory, including in the Gaza Strip;

10. Also calls for immediate steps towards ending the closure and the restrictions imposed by Israel on movement and access into and out of the Gaza Strip, including through the sustained opening of the crossing points of the Gaza Strip for the flow of humanitarian aid, commercial goods and persons in accordance with international law, including as it pertains to legitimate security requirements;

12. Urges the provision of immediate and unimpeded humanitarian assistance to the Palestinian civilian population in the Gaza Strip, bearing in mind critical medical, food, water and fuel needs, and urges increased support to the United Nations Relief and Works Agency for Palestine Refugees in the Near East, recognizing the vital role of the Agency, alongside other United Nations agencies and humanitarian organizations, in providing humanitarian and emergency assistance, notably in the Gaza Strip;

13. Encourages tangible steps towards intra-Palestinian reconciliation, including in support of the mediation efforts of Egypt, and concrete steps to reunite the Gaza Strip and the West Bank under the legitimate Palestinian Government and ensure its effective functioning in the Gaza Strip;

14. Welcomes and urges further engagement by the Secretary-General and the United Nations Special Coordinator for the Middle East Peace Process and Personal Representative of the Secretary-General to the Palestine Liberation Organization and the Palestinian Authority to assist, in cooperation with concerned partners, in the efforts to immediately de-escalate the situation and address urgent infrastructure, humanitarian and economic development needs, including through the implementation of projects endorsed by the Ad Hoc Liaison Committee for the Coordination of the International Assistance to Palestinians;

15. Requests the Secretary-General to examine the present situation and to submit a written report, as soon as possible, but not later than 60 days from the adoption of the present resolution, containing, inter alia, his proposals on ways and means for ensuring the safety, protection and well-being of the Palestinian civilian population under Israeli occupation, including, inter alia, recommendations regarding an international protection mechanism;

16. Calls for renewed and urgent efforts to create the conditions necessary to launch credible negotiations on all final status issues to achieve, without delay, an end to the Israeli occupation that began in 1967 and a comprehensive, just and lasting comprehensive peace based on the vision of a region where two democratic States, Israel and Palestine, live side by side in peace with secure and recognized borders, on the basis of the relevant United Nations resolutions, the Madrid terms of reference, including the principle of land for peace, the Arab Peace Initiative 6 and the Quartet road map, as called for in Security Council resolution 2334 (2016) and other relevant resolutions;

17. Decides to adjourn the tenth emergency special session temporarily and to authorize the President of the General Assembly at its most recent session to resume its meeting upon request from Member States.