There are arguably only four very significant variants of the SARS-CoV-2 virus out of thousands of mutations. They are identified by the public as the UK, South African, Brazil and India variants. They infect and sicken the old and the young, including children, and even kill the infant baby child as this alarmed epidemiologist tweets.

With this threat approaching the USA, President Joe Biden is going to try and get seventy percent of all Americans dosed with at least the first vaccination jab against COVID-19 by 4 July 2021. But a new study in the UK says that a single dose of the vaccine is not enough for immunity to the new ‘escape’ variants of concern. They escape the antibodies.

To reach President Biden’s magic 70% number which according to experts might not deliver herd immunity (85% is the target many scientists say is important including America’s own Dr. Anthony Fauci), Biden will need to get the vaccine approved for children to reach 70% and he says he is working on that.

US President Biden said in a speech on 4 May:

“Our new phase will focus on three areas.  First, kids, children between the ages of 12 and 15 years of age.  They are not yet eligible for a vaccine.  The FDA’s scientists are currently reviewing the data to decide if — if and when to authorize that age range for vaccinations.  The FDA — and the FDA alone — will make that decision.

“But today, I want American parents to know that if that announcement comes, we are ready to move immediately –immediately move to make about 20,000 pharmacy sites across the country ready to vaccinate those adolescents as soon as the FDA grants it’s okay.

“Now, most Americans have a vaccination site about as close as their house is near to a neighborhood school.  We’re also going to slip [sic] vaccines directly to pediatricians — ship them to pediatricians during the following weeks.  So parents and their children can talk to their family doctor about it and get the shot from a provider they trust the most — easy, fast, and free.” Citing: Remarks by President Biden on the COVID-19 Response and the Vaccination Program MAY 04, 2021

Biden may not need to overcome vaccine hesitancy among Republicans say observers as well as CNN and CDC pollsters, in order to reach 70%. Can he achieve this goal? He said he will try.

“But I think what’s going to happen — it’s my prayer — that more and more people who get vaccinated are going to be listening to people who they love and — and are around, and they’re going to say, “Why don’t you just go ahead and do it?”  And there’s some evidence — we still had a good dose of vaccine being administered the last two weeks, and it’s still moving.” Citing: Remarks by President Biden on the COVID-19 Response and the Vaccination Program  MAY 04, 2021

Twenty-six percent of the American adult population say they will not get the vaccine according to a CNN poll released on 29 April.

Just the straight arithmetic suggests Biden is hoping to make up the difference amongst American children with pediatricians doing the administration of the dose.

India is spawning dangerous new variant lineages that reached America and could defeat Biden’s plan according to information supplied by two scientists:

1.) Dr. Vinod Scaria, a scientist at the Council of Scientific and Industrial Research’s Institute of Genomic and Integrative Biology (CSIR-IGIB) in New Delhi, India, who explains the ‘escape variant’ lineages emerging from India, plus information from the global data repository known as GISAID.

2.) Dr. Rosemary Boyton, Professor of Immunology and Respiratory Medicine at Imperial College London, who led research just now released that indicates that a single jab is not enough to stand up against the new ‘escape variants’ unless the patient has also recovered from a previous COVID-19 infection and has the antibodies as well as the impact on T-cells and antibodies delivered by the first jab. 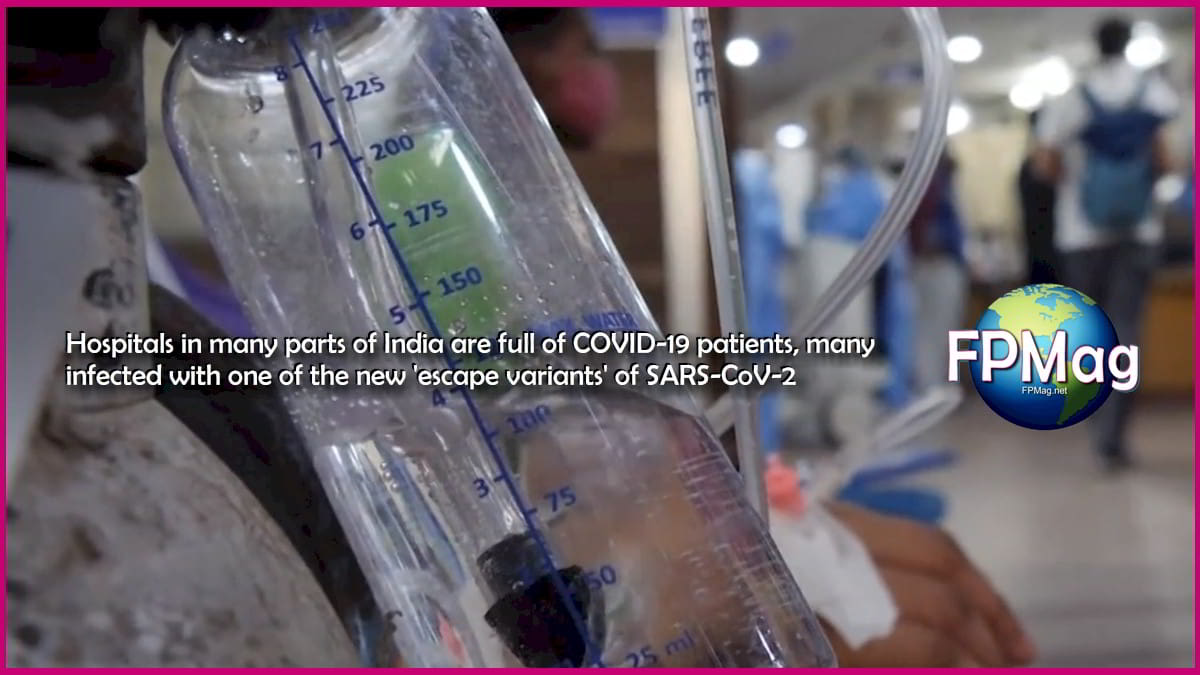 Hospitals in many parts of India are full of COVID-19 patients, many infected with one of the new ‘escape variants’ of SARS-CoV-2. Prime Minister Narendra Damodardas Modi claims that the massive level of infections in India are driven by new especially dangerous variants but the world is watching as millions of people from India have been collecting in close quarters without masks for religious and political events. That may be the cause of the massive overcrowding of hospitals and lack of oxygen but lack of public health preparedness may also be indicated. In any case, India is in a mess and is spawning dangerous new variant lineages as the virus learns the human body overnight in millions of people at once.

The other thing that seems to be a certainty is the desperate urgency of Biden’s plan. As always anticipated by scientists, there will be dangerous mutant versions of the SARS-CoV-2 virus and the only way to prevent their damage is to deny them all hosts with the standard respiratory disease mitigation efforts. Transient carriers of the disease must be suppressed too.

“If COVID-19 is more infectious than previously thought, the herd immunity threshold would be higher too. So, for instance, if each infectious person could infect four people, 75% of the population would need to be immune to stop the virus from spreading. If each person could infect five others, 80% would need to be immune; if they could infect six others, 85% would need immunity,” suggests  Marc Lipsitch, professor of epidemiology and director of the Center for Communicable Disease Dynamics at Harvard T.H. Chan School of Public Health

SARS2 Worst-Yet Incipient Escape Variant series may be the B.1.617 +V382LS sequence or the B.1.618 lineage but it is the B.1.617 (nicknamed the “double mutant”) that is spreading the most until now. Little is known about these three other than what has been filed with the GISAID. 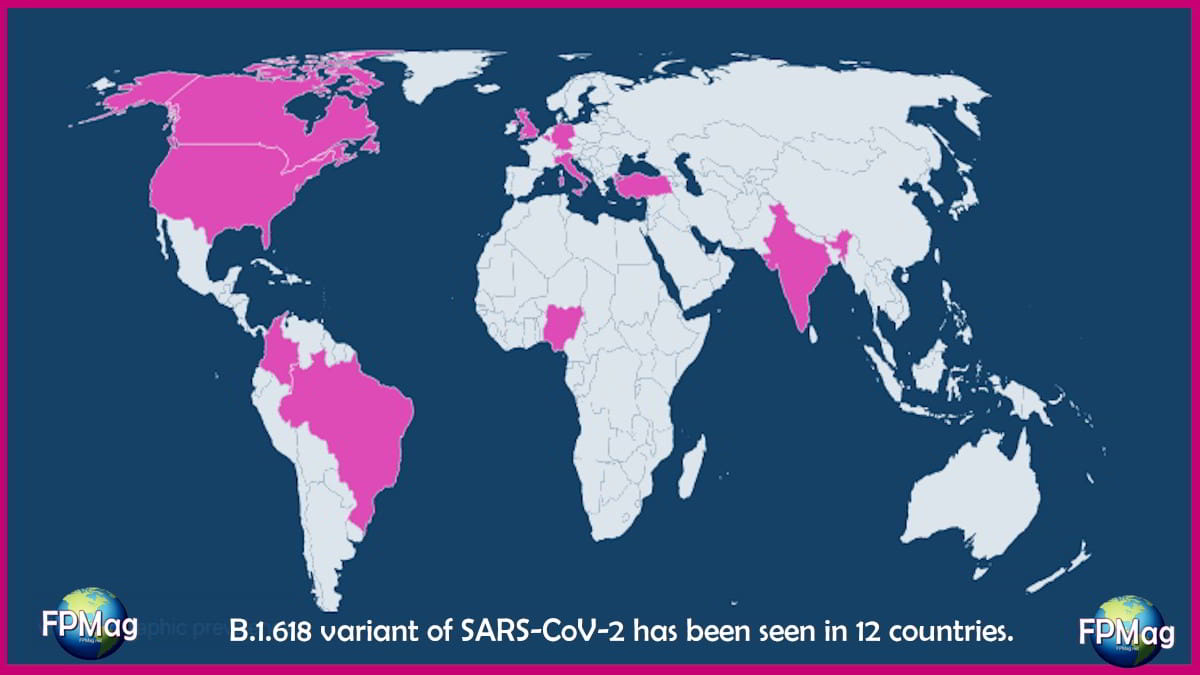 SARS2 worst Incipient Escape Variant series may be the B.1.617 +V382LS sequence or the B.1.618 lineage but it is the B.1.617 (nicknamed the “double mutant”) that is spreading the most until now. Little is known about these three other than what has been filed with the GISAID.  Art/Cropping/Enhancement: Rosa Yamamoto FPMag

According to the global data repository known as GISAID, the B.1.618, is one of the most common variants sequenced in the past two months.

GISAID in its own statement, explains that “the GISAID Initiative promotes the rapid sharing of data from all influenza viruses and the coronavirus causing COVID-19. This includes genetic sequence and related clinical and epidemiological data associated with human viruses, and geographical as well as species-specific data associated with avian and other animal viruses, to help researchers understand how viruses evolve and spread during epidemics and pandemics.”

GISAID Source Compliance: All data set out below in charts and graphs on the B.1.617 and the B.1.618 is sourced from GISAID unless stated otherwise. Click any image to enlarge. 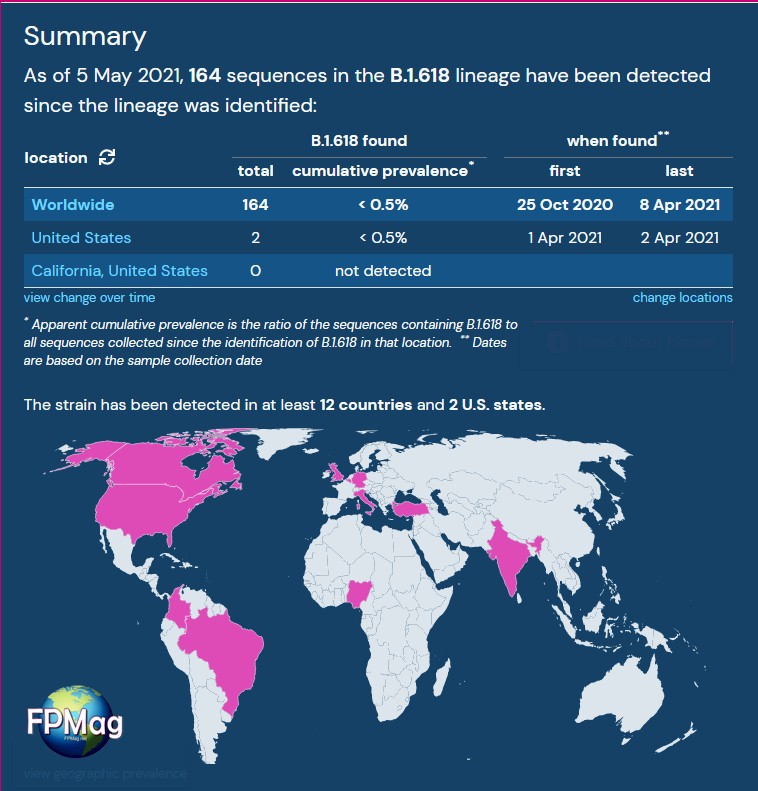 Vinod Scaria, a scientist at the Council of Scientific and Industrial Research’s Institute of Genomic and Integrative Biology (CSIR-IGIB) in New Delhi, India has been rolling out data on the B.1.618 variant that has presented in West Bengal; detected in a few test samples in Delhi; and seen in the Maharashtra state of India, particularly in  Vidarbha, Nagpur, and Amravati regions of Maharashtra. It has also been spreading in Canada and the United States as well as a few other countries. Photo screen capture courtesy of OutBreak.info (Click link for full details) Art/Cropping/Enhancement: Rosa Yamamoto FPMag

Is Biden Wrong about the single jab?

Only for the rare circumstance of a person being previously SARS-CoV-2 infected and getting at least the  first dose of the vaccine is a person significantly immune to the recent ‘escape variants‘ says Imperial College London study. Both jabs are needed to fight the escape variants.

A single dose of COVID-19 vaccine boosts protection against SARS-CoV-2 coronavirus variants, only in those persons who were previously infected with the disease. People who had built up antibodies and were also recently vaccinated with the first dose resisted the new escape variants.

“Our findings show that people who have had their first dose of vaccine, and who have not previously been infected with SARS-CoV-2, are not fully protected against the circulating variants of concern,” said Rosemary Boyton, Professor of Immunology and Respiratory Medicine at Imperial College London, who led the research.

“This study highlights the importance of getting second doses of the vaccine rolled out to protect the population,” Dr. Boyton said. 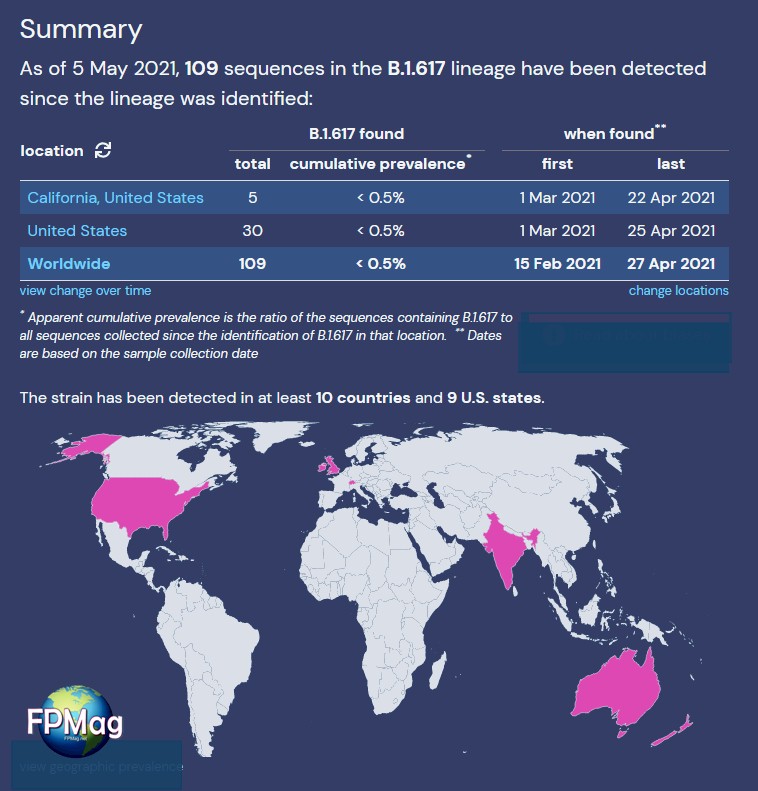 By mid-April  2021, the variant of the B.1.617 with the misnomer of “double mutation” (see illustration below from outbreak.info) a coronavirus found in Maharashtra Sate of India  may have been the most prevalent among all mutant variants in India. 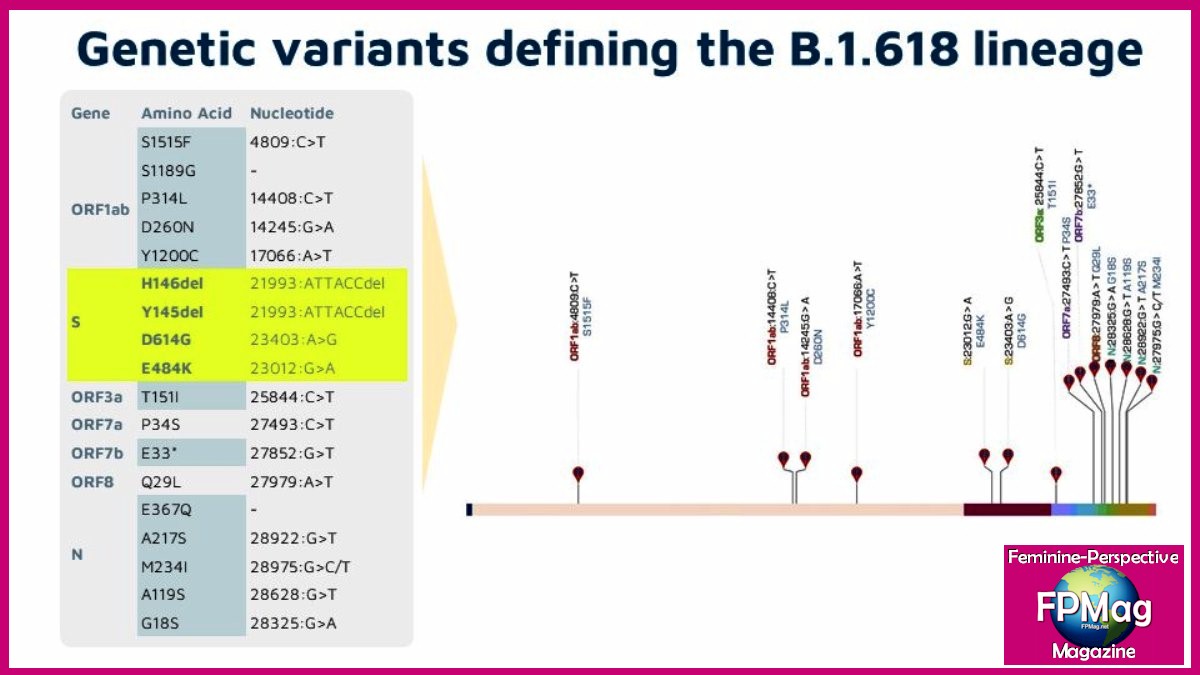 Genetic Variants Defining the B.1.618 lineage.
Source: Dr. Vinod Scaria, a scientist at the Council of Scientific and Industrial Research’s Institute of Genomic and Integrative Biology (CSIR-IGIB) in New Delhi, India 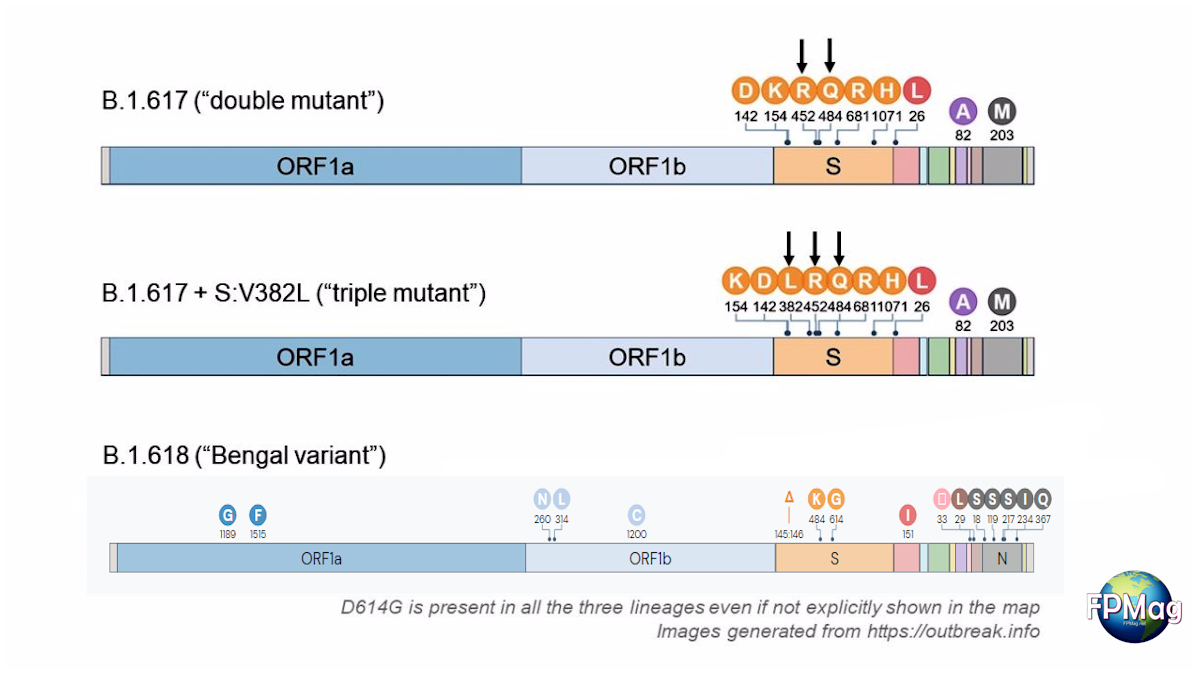 There are arguably four very significant variants of the SARS-CoV-2 virus. They are identified by the public as the UK, South African, Brazil and India variants. They infect the old and the young, including children, alike.

The first sign of a super-variant of the SARS-CoV-2 virus may have presented in West Bengal; detected in a few test samples in Delhi; and seen in the Maharashtra state of India, particularly in  Vidarbha, Nagpur, and Amravati regions of Maharashtra.

What has been noted is that B.1.618 is transmitting exponentially say medical doctors in India.

Maharashtra is the second-most populous state in India and it is currently under a tight lock down because of a raging storm of COVID-19 illness.

Maharashtra state in India became renown for a complex variant of the novel coronavirus named B.1.617 which the World Health Organization has barely had time to study since it was only first seen in December of 2020 says the World Health organization in recent statements. That may sound sarcastic but apparently it takes a long time for organizations to collect detailed and proven data from places like India. Scientists in India and now all around the world are researching this variant trying to learn everything possible.

Meanwhile, infections in Maharashtra are skyrocketing. The government of Prime Minister Modi is hopeful that the current lockdown of the state will slow the onslaught of COVID-19 infections which have been depleting all medical resources including hospital beds and oxygen.

Note: India's reported death sum and cured data are widely seen among epidemiologists and biostatisticians as unreliable. For example, 3,045,620 is CSPAC estimated sum of deaths while India reports 525,116, creating the largest discepency in the world. India might only report hospital tested cases. Sources among hundreds of nurses and other medical practitioners provide a picture that in summary concludes most cases never present in a hospital especially in northern provinces where health care is less available and utilization is low anyway because of poverty, hence most people die at home in India. This theory could explain discrepancies between reported data and algorithmic estimates.