New SARS2 Strains: carelessness is not an option

The virus learns us faster than we learn the virus.  It changes based on what it learns say the scientists. We humans have not done that.

We humans need to change too.

A continued reckless approach to following public health guidelines could end the human race as we know it. Sickness coupled with starvation in 2021 needs to be our family health focus for defeating this beast.

Can you believe that finance minister in Ontario, Canada flitting off to the Caribbean with his family while his province and its hospitals are being ransacked by COVID-19?

The current problem is that many of today’s politicians are arrogant idiots who are not there for you.

The Ontario Premier Doug Ford  announced the resignation of his finance minister while the province remained under lockdown but not before he tried to defend the scurrilous cuss. What’s worse, is that this was the second such trip, to a different destination.

In some countries like the Philippines, government officials are smuggling in vaccines for themselves.

Mr.  Trump in the White House has been playing golf but nevertheless getting fat through what must be excessive gluttony while millions of his countrymen starve and his country’s medical infrastructure nearly collapses under the load of seriously sick Americans.

Start believing that this virus and others that follow have the potential to end the human race as we know it unless everyone abides the basic principles of helping each other and by avoiding infection and by not being spreaders of the disease.

It is foolhardy to go into public places without wearing a respirator mask. Do not accept the argument that you are taking a mask away from a medical worker. That is absolute poppycock. Your officials are not just liars but stupid liars. If the population wore N95’s (95% efficient at blocking the virus) the pandemic would have ended by now.

Staying healthy and out of the hospital is the best thing a person can do for a medical worker.

If you have been reading our articles lately you know that governments around the world spent nearly two trillions of dollars on military weapons in 2020 and could have, should have, manufactured personal protective equipment for everyone. Let’s be honest, politicians are idiots if not warning people to wear a respirator mask in 2021. Learn how and do that.

Viruses are adaptive in how they attack cells.

Having been in human cells for a little over a year, the pandemic virus has begun to learn in detail how to infect more people and how to work around our cell’s defences. 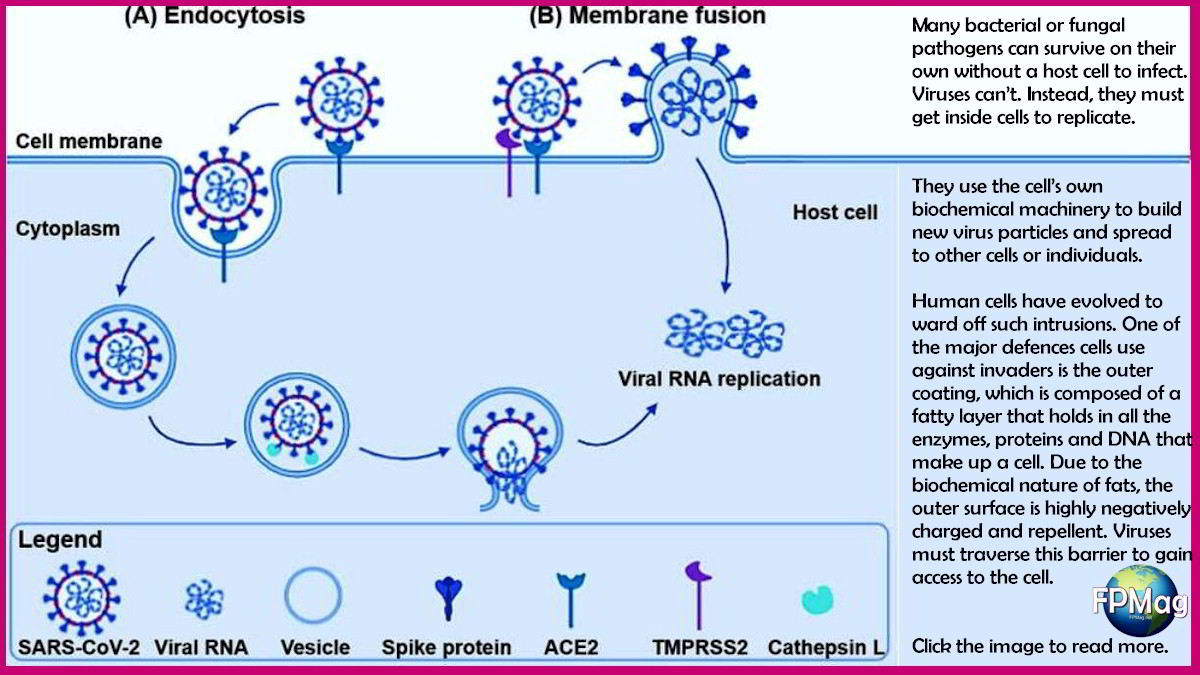 The picture and its story.
The routes of SARS-CoV entry into target cells.

According to the full study by Pislar et. al, (The role of cysteine peptidases in coronavirus cell entry and replication), the above graphic shows “the viral entry takes place either by (A) receptor-mediated endocytosis or by (B) membrane fusion. (A) Binding of SARS-CoV and SARS-CoV-2 to the cellular receptor ACE2 can result in virion uptake into endosomes. The spike protein is activated by cysteine peptidase cathepsin L in endo-lysosomes. (B) In membrane fusion, the spike protein activation is mediated by TMPRSS2 or other transmembrane serine peptidases at the cell surface, resulting in fusion of the viral membrane with the plasma membrane. Either way, the RNA genetic material of the virus is released, and the late stage of the life cycle subsequently takes place by RNA replication. ACE2, angiotensin-converting enzyme 2; SARS-CoV, Severe Acute Respiratory Syndrome Coronavirus; SARS-CoV-2, Severe Acute Respiratory Syndrome Coronavirus 2; TMPRSS2, transmembrane peptidase/serine subfamily member 2.”

If one cannot find a respirator mask, and must go to a store, one clever alternative is to double up two  surgical spit barrier masks and try to get the most complete seal possible around the mouth and nose. Do not even contemplate going to a restaurant for anything but takeout.

Your nose and eye area is where the airborne virus enters.

In public, wear your mask with goggles or with a proper medical face shield that is closed with a foam barrier at one end (forehead), and stay more than two meters away from any other person while doing the necessary shopping. It would be better to stay home and order delivery. Not everyone can do that.

Work from home and completely stay home. In the alternative, learn about and invest in complete personal protective equipment intended for protection against infectious disease.

Wash your hands very often; stay away from everyone else. Keep your home sterilized on the most commonly touched items like door knobs and railings and do not touch your face without first performing thorough hand hygiene.

That’s all there it to the new variations in the virus. There will be many more. It all means, make no more mistakes. 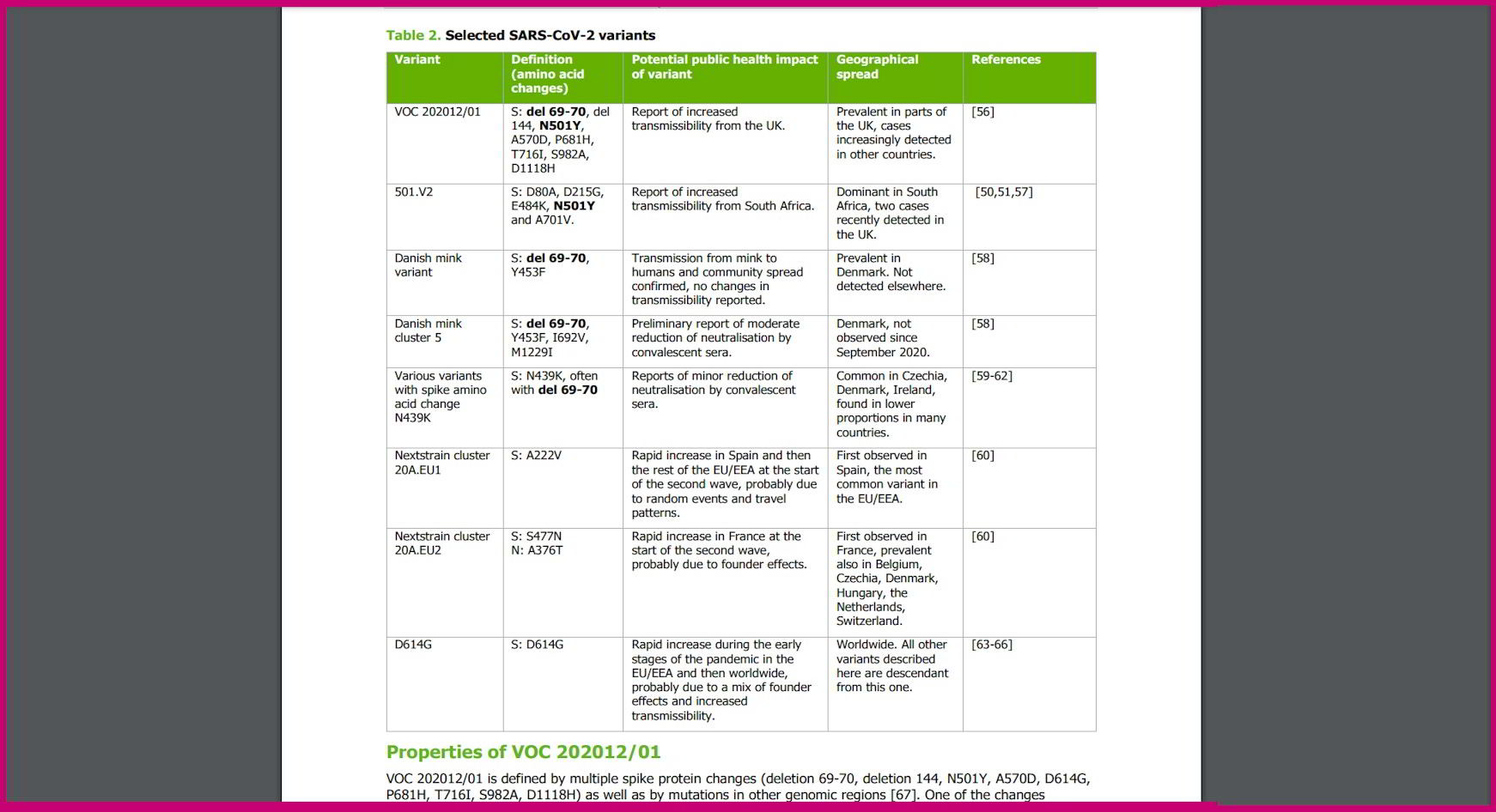 The British B.1.1.7 SARS2-Variant Causing COVID-19 is an evolving virus. That’s what they do. They change to improve their chances of taking over your cells. If this wasn’t a problem there would be no pandemic.

B.1.1.7 (VUI–202012/01)  is said to be far more infectious and as it spreads among millions of people who exhibit no symptoms, the importance of physically distancing; mask wearing; handwashing; general hygiene; detecting and isolating cases; identifying and quarantining close contacts; and preventing infections from entering Canada, all become paramount. See: Canada / USA SARS-CoV-2 Infections on alarming trajectory

“The United Kingdom (UK) has faced a rapid increase in COVID-19 case rates in the South-East, the East and the London area, which is associated with the emergence of a new SARS-CoV-2 variant, VOC 202012/01. ” Citing: EU Document: COVID-19 risk related to spread of new SARS CoV-2 variants

According to European Union scientists, and supported by the US Centers for Disease Control, “On 18 December 2020, the South African government had reported the emergence and rapid increase of a new variant designated 501.V2. Analysis of 2,589 SARS-CoV-2 whole genomes from South Africa collected between 5 March and 25 November 2020 identified 190 sequences of the 501.V2 variant from samples collected between 15 October and 25 November 2020. Researchers concluded 501.V2 emerged first in early August in Nelson Mandela Bay, located on the coast of the Eastern Cape Province. By early November, it was the dominant variant in the Eastern Cape and Western Cape Provinces.”

On 22 December 2020, two  separate cases of this 501.V2 variant were detected in the UK in two symptomatic patients returning from South Africa. It’s moving fast.

SARS-CoV-2 501.V2 has since been detected in number of countries. It’s a real hustler. A particle of this homicidal pathogen can infect anyone much more easily. Carelessness is not an option.

This variant is much better at infecting people. A person may have already been in contact with an earlier variant of SARS2 which their cells defeated, but it wasn’t as efficient a varius as the latest variants which benefit from more learning of the human body. The next exposure may take you down. 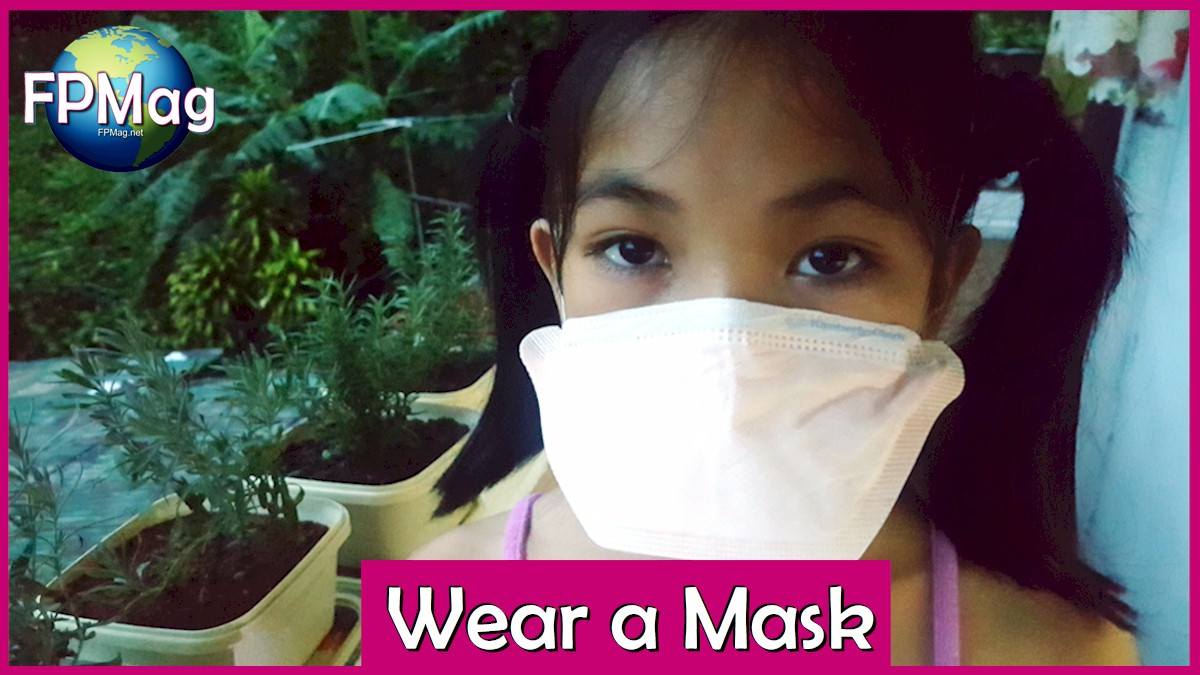