The total actual number of infections in Canada is likely greater than 6,138,350 (16.325% of the Canadian population) including unreported mild and asymptomatic cases. A nearly ten percent positive testing result on top of the existing cases and the asymptomatic cases that will never be tested helps the mind’s eye see the facts, but that is not how the data is calculated.

The fact of the high number of unknown asymptomatic cases moving around in society makes the new B.1.1.7 British strain with its 23 modifications, the highest known anomaly of this virus, more worrisome for public health officials.

This article will share some startling news but also brings to the reader some good thoughts of good people who know how to help families stay safe.

Moms and kids are hearing about the new SARS2 strain and there is no doubt it is causing some panicky feelings, according to the emails FPMag has been receiving. That worry may be the wrong one to have. Preventing any contact with the virus is the important goal.

The civil society solidarity team has found some amazing videos with the help of the World Health Organization to inform children how they can join the global solidarity movement fighting this menace. That good stuff is here.

B.1.1.7 (VUI–202012/01)  is said to be far more infectious and as it spreads among millions of people who exhibit no symptoms, the importance of physically distancing; mask wearing; handwashing; general hygiene; detecting and isolating cases; identifying and quarantining close contacts; and preventing infections from entering Canada, all become paramount. Unfortunately the North American test, trace, treat and quarantine infrastructure is nowhere like what China has assembled. China has achieved some great results with its CTTIO (Contact Tracing / Treatment / Isolation / Observation) teamwork.

“B.1.1.7 (VUI–202012/01) is not the menace. Catching the coronavirus is the menace. But the families which follow the guidelines for avoiding infection, in the massive majority, do not contract this virus,” observed Dr. Anderson of The RINJ Foundation at a recent briefing. “Follow your public health guidelines and your family should be safe,” added the kind doctor.

“The new strain is not the menace; catching COVID-19 is still the real menace. Health Canada shares useful information for mothers and children to help them avoid infection,” stressed the doctor who says that avoiding infection is easily done by those who know how hence learning is important. “Use the resources available and follow the advice of your own doctors.”

The United States has proven that ‘forced Herd Immunity‘  is mythical nonsense.

It is likely that 64.939% of the USA, since November 2019, has been infected with the SARS-CoV-2 virus including reported + estimated unreported mild and asymptomatic cases (213,000,813). That number does not include a large percentage of reinfections which cause a patient to be counted twice. It should be added that the American Red Cross has detected the virus in blood donations going back to the fall of 2019.

The Civil society Partners for Solidarity against COVID-19 has been maintaining a beta computer application for assembling information and predicting unreported data all year using tons of exact data, especially numerous University student serology testing projects in southern and northern west coast America. Thus far, the information is consistent with most scientific reports of other biostatistical calculations and public health forecasts.

Tests that were not being conducted during the Christmas holiday period have restarted and will be seen today and over the next few days. It will look like a surge but that is not necessarily the case, say statisticians.

Experts think that things could have been worse and that mitigation efforts are working. The formula is straightforward and has never changed: physically distance; detect and isolate cases of COVID-19; identify and quarantine close contacts; and prevent infections from entering the country with strong quarantine measures.

The accumulation of active cases today beats all records in Canada and threatens to possibly overwhelm medical resources according to federal Canadian officials plus officials in Ontario and Quebec.

The climb in new cases for Canada is steep.

The IHME estimates excess deaths in Canada to reach much higher than CSPaC estimates.

Note: Above is region/county Health Unit reports from the province of Ontario and the individual units.

The total actual number of infections in Canada including all the untested, unreported, asymptomatic infections is likely greater than 14,832,933 (38.44% of the population) including mild and asymptomatic cases. That would mean the estimated inferred average Infection Fatality Rate:
(IFR) is likely around 0.35%

51,915 (0.35% IFR) is the estimated number of Canadian COVID-19 deaths (based on the inferred IFR) including those deaths unreported as COVID-19). The IHME estimates excess deaths in Canada to reach much higher than CSPaC estimates.

52255 Is the estimated number of Canadian COVID-19 deaths based on a modified universal algorithm which factors more sophisticated public health infrastructure and also fewer available urgent care beds and facilities which is a problem in much of Canada in an emergency measures context.

It is safe to say that Canadians have endured the grief of losing 52255 family members. Every number has a face. May their memory be forever a blessing to their families and friends.

While the political data dissemination processes of the United States claim the current sum of COVID-19 deaths sits at 335,820 at the time of publication, a running algorithm forecasting excess deaths based on the events of 2020 at roughly 100,000 more, 441, 645. At the same time the estimated IFR figure produces 428,132 deaths, not accounting for eventually untested fatalities. In short, the excess deaths are now over 100k higher than the Trump administration’s politically vetted data.

“We do not have the last ten days data hence those days are estimations based on our own trends which do factor in and correlate published events like trailer loads of accumulated deceased being processed by medical examiners creating bumps in the medically reported deaths that are not mentioned in the politically reported events. We also incorporate the work of the Centers for Disease Control,” says Fred Harris, biostatistician team lead for the Civil society Partners for Solidarity against COVID-19. 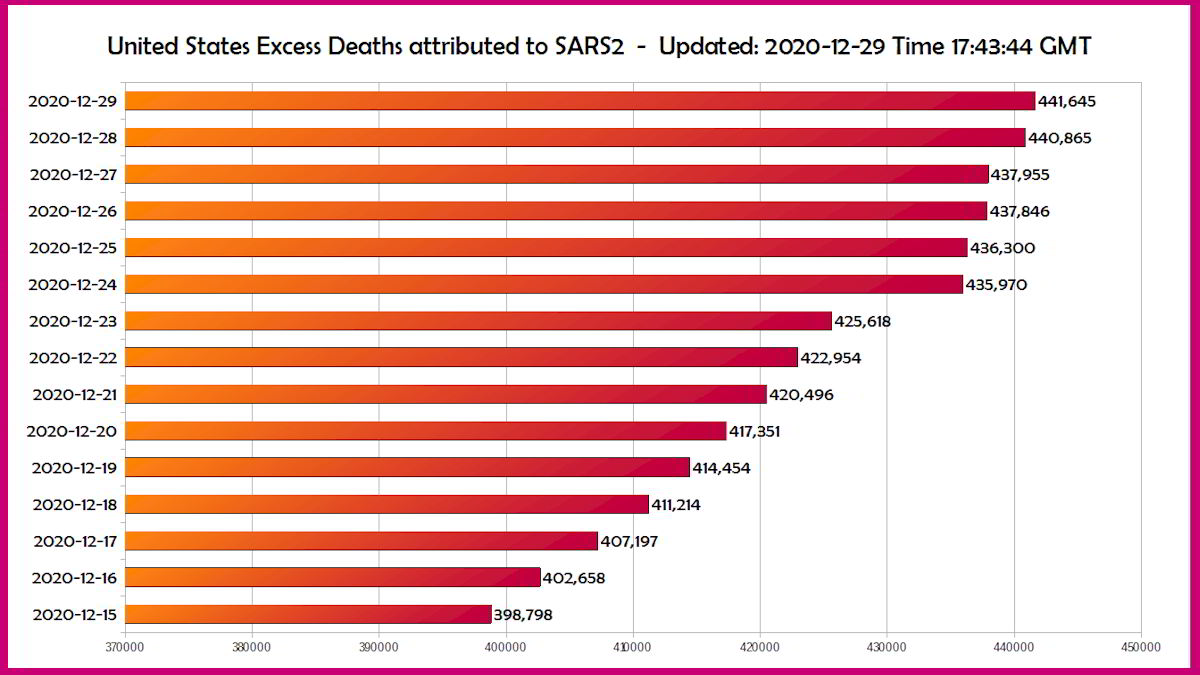 The above data is not to be confused with the estimated IFR.  An estimated 0.201% is the (publication date’s) estimated inferred average Infection Fatality Rate (IFR) (428,132 USA deaths by 29 December 2020). The numbers in the graph above include pneumonia cases and thrombosis cases that never made it to a hospital and were never tested. Infection fatality risks or rates are based on actual numbers of cases known long after the pandemic has ended. Until then, IFR estimates are purely guesswork, but useful guesswork.

“The point of this graph (above),” says Mr. Harris, “is that this would never have happened if there was no SARS-CoV-2. This is the price of COVID-19. This horrible truth also strengthens the argument that public health guidelines for mitigation are extremely important.”

USA Heads for 20 million cases in a matter of hours or days.

What is happening in the United States?

Testing during the Christmas period took a back seat to other things but is now getting back on track. Numbers will seem to surge but that will mostly be attributable to the accumulation of unreported data.