Chad Hensler, a Trade Commissioner of the Canadian Embassy in China—whose Linkedin profile has vanished—and all the persons in the chain of command below the level of Ambassador Dominic Barton—who would never do such a thing as did Chad Hensler and his party-animal parody co-conspirators—must be removed from their offices, fired unceremoniously and sent home in disgrace if not already.

Hensler previously served as First Secretary and Deputy Consul in the Canadian Embassy in China, responsible for finance and human resources.

Probably the parties should be charged with public mischief since the parody T-shirts they produced back in the spring  of 2020 while the people of Wuhan were dying in hordes, offended so many people and caused violence toward overseas Canadians.

The general press is just hearing about this now, but it has been one of many insults slung at China we all thought were just done by social media sociopaths and not a government.  This act of war by Canadian officials came in the midst of a tragedy in Wuhan, the third city in a row in Hubei province to be hit by SARS2 and it is now a shock to learn that the Canadian Government sat on this for months.

Which is more repugnant: the SARS-CoV-2 virus or the humans who use it for their racist digs? 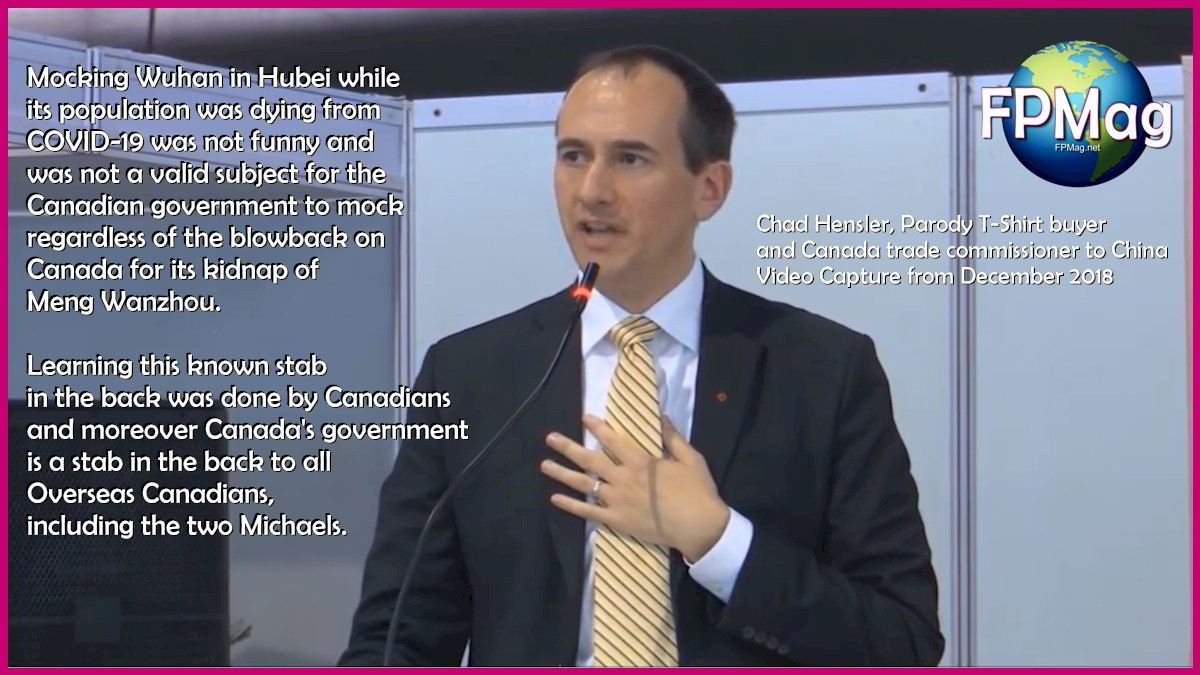 Mocking Wuhan in Hubei while
its population was dying from
COVID-19 was not funny and
was not a valid subject for the
Canadian government to mock
regardless of the blowback on
Canada for its kidnap of
Meng Wanzhou.
Learning this known stab
in the back was done by Canadians
and moreover Canada’s government
is a stab in the back to all
Overseas Canadians,
including the two Michaels.
Chad Hensler, Parody T-Shirt buyer
and Canada trade commissioner to China
YouTube Video Capture from December 2018
Art/Cropping/Enhancement: Rosa Yamamoto FPMag

Some people interviewed are saying, “Canada should just pack up and get its racist embassies the ! out of Asia”.

As a young U of T student put it:

Morons. The people that Canadian leaders are pointing their racist actions at a people that comprise the largest portion of the human race.

Morons. Ridiculing China’s government—which has a better human rights record than Canada—about the source of SARS2 might blow up. There is plenty of hidden evidence that Canada and the USA had the disease first. That might be the long history of pneumonia of unknown etiology amongst cave explorers. Coronaviruses were being shed by bats as their cave temperatures rose with gradual climate change thus introducing to the bats’ environment a white-nose syndrome fungus (which thrived in the warmer temperature) that infected some families of bats during their hibernation periods causing the bats to in turn become agitated, sick and to shed more virus particles in their snot and feces than scientists realized they possessed. The number of known bat coronaviruses in North America grew from 12 to 36 by 2007. Since then humans know there are many more than that.

Morons. Canadians and Americans have been playing around with SAR-CoV2 mutations, creating them since 2003. It’s not like they knew the SARS-CoV-2 originated in Hubei. The Canadians and Americans knew it did not. In fact it is known that there are dozens of zoonotic coronaviruses with similar or identical genomics, all over the world. Many are in mainland Southeast Asia where the West loves to dump its garbage which is heavily disturbing the environment. It is just a matter of time before more coronaviruses jump to humans unless they have already without creating a big splash which means that the next big pandemic has already started, probably like the current one which has led to massive immunity in mainland Southeast Asia and parts of Africa. 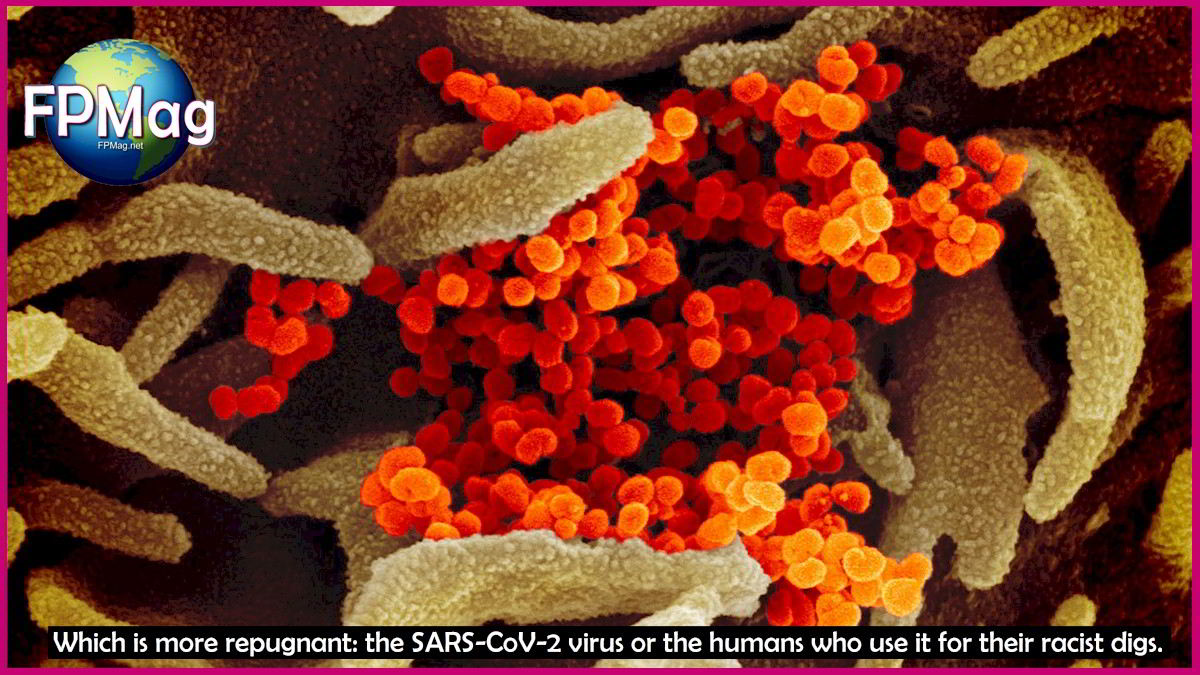 Which is more repugnant: the SARS-CoV-2 virus or the humans who use it for their racist digs? is the rhetorical question. Photo Credit: US Govt. National Institute of Allergy and Infectious disease. Art/Cropping/Enhancement: Rosa Yamamoto /FPMag

In a recent survey, conducted by Nanos Research, commissioned by CTV News,” 1,048 Canadian adults were asked what Canada’s future trade relationship with China should be and 45 per cent responded that they believe Canada should decrease trade, while just 10 per cent said Canada should increase trade ties with China.” CTV Full Story.

Canada at its China embassy decided to produce and promote T-shirts with a stylized ‘Wuhan Bat‘ and claims China officials, ‘declaring that Wuhan was the source of the COVID-19 illness impacting Canada in one of the worst outbreaks of the disease killing more of the infected people than in most locales‘.

Well, Wuhan is not the author of COVID-19 but it was the third city to be infected with early variants of the zoonotic SARS-CoV-2 within the Hubei province according to genomic studies of variants gathered around that time.

The virus causing COVID-19 and the disease by other local names has been around for a long time. Most often the disease has been referred to as “pneumonia of unknown etiology”, for years. It compares to variants taken in 2010 during research of “Sarbecoviruses in continental Southeast Asia, the group of coronaviruses that includes SARS-CoV and SARS-CoV-2, respectively responsible for the SARS epidemic in 2002-2004 and the current Covid-19 pandemic” (citing RINJ.org article).

Substantial evidence points to a  sarbecovirus discovered in the USA in 2007 in bat snot and debris found in caves in northern Washington state, that matches closely the current SARS-CoV-2 zoonotic genome. This discovery was made by and reported by the Centers for Disease Control and shared with others.

In mainland Southeast Asia since 2010 the SARS2 virus has been known but not as a pandemic virus.

Most patients, like everywhere else in the world during the pandemic in 2020, did not perish from the zoonotic SARS-CoV-2 which initially wasn’t well suited to last long in a human and they didn’t in the 2000s.

So not only is Wuhan not the source of the pandemic zoonotic coronavirus, Wuhan was a victim of this virus when Canada decided to ridicule China through its China Embassy. Overseas Canadians are apoplectic with rage.

It’s not hard to understand why some Canadians like Mr. Chad Hensler, Consul & Trade Commissioner at Consulate General of Canada in China, are ignorant about other nations’ peoples and other lands.

Canadians live next door to the United States where education is only available to the rich, an increasing small number of people. That’s important because Canadians are superimposed with American news and entertainment which is all about violence and racism.

In Canada, big money is also required to get an education but not as much in the USA.

Both Canada and the United States being extremely racist nations also taints their academia.

“Canada has a long history of racism and colonial violence, dispossession, and oppression of Indigenous peoples and communities that has been linked to a plethora of health and social inequities, including racist treatment within health care, and intergenerational trauma.” (Citing The Lancet, 1 February 2021)

Moreover, in the United States, its government needs to tell lies to its constituent populations in order to use the machinery of the nation for its own personal purposes, like consolidating oil buyers and sellers to the advantage of special money interests.

For example, in order to be able to send hundreds of thousands of troops over 11 years to Iraq and spending trillions (yes Trillions) of US Dollars to favoured manufacturers of weapons in order to kill a million Iraqis, US politicians needed to tell the whopping lies about Iraq possessing weapons of mass destruction and being on a path toward attacking America with those weapons.

Iraq once was a happy, prosperous oil-producing nation that had great universities, hospitals and happy people—until America, Canada and the UN Security Council came to meddle. Today Iraq is a growing human catastrophe approaching the threshold where it becomes a complete meltdown like Syria or Yemen.

It’s like the 19 November 2015 attack when the Canadian Air Force came to Mosul Iraq and bombed an ice cream factory  among other things. It claims it was attacking a so-called bomb making Factory but everyone living in Mosul at the time knew the so-called bomb-making factories were local morons converting automotive repair or parts manufacturing improvised explosive devices. Next door to this one dumpy place that the local resistance had carefully reported to the US intelligence community and also reported that it, the resistance, would strike the facility from the ground because of the high risk of hitting kids at the end of the day when they came to clean the pots with spoons for free or the children of the workers who didn’t want to sleep at home alone at night. (Very often the Mosul Underground Resistance told the neighbours to get lost for a while as they did their business.)  Children were even present at night because the dozen dairy workers were 50% without partners because of the war and occupation by the Daesh. The Canadians bombed it anyway and killed all the children and all the workers. We were there.

And the lesson of that story is that the Canadian government is not only racist but a collective liar about its conduct. Iraqi kids are people too—just as Wuhan Asians are people too. 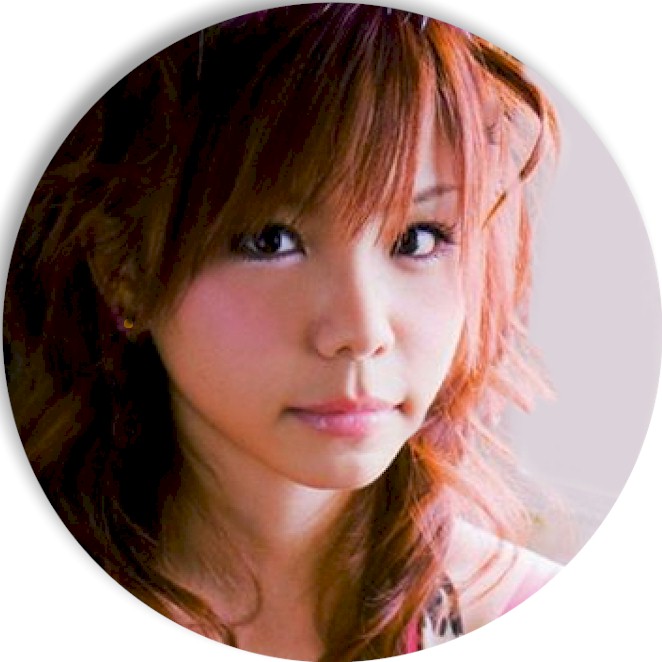 The article " Canada ridiculed Wuhan when Hubei was dying. Editorial " was written by Author: Rosa Yamamoto (Biography, Email) Rosa Yamamoto has been an active member of The RINJ Foundation since 2011 and the Art Director for Feminine-Perspective Magazine since 2015.
Contact Rosa Yamamoto on Twitter ~ Facebook ~ Find on Wikipedia ~ Find on YouTube