Op-Ed: Canadian fail. A Pandemic is only stopped by all of us, not tyranny. Not Vaccine Nationalism either.

Some Canadians have been reckless. It only takes a few in a pandemic. No wonder the new-authoritarian Doug Ford is panicking with cop teams on the sidewalks and at the provincial borders. Blowback has been swift and harsh. Ford needs to be politely tapped on the shoulder by his extremist Conservative Party before the people of Ontario take to the streets and do it the hard way. Inciting recklessness is what Ford is doing. A health care solution is needed; Doctors’ thinking, not stinging rebukes from desperate politicians.

Ford’s is the government that lost 55 million N95 respirators and other personal protection equipment that were stored following the 2003 SARS1 outbreak. Those masks could have ended the pandemic for Ontario according to a Harvard doctor.

Playing with “vaccine regionalism” is another of Ford’s dangerous games normally played around the world by despots.

The Canadian Broadcasting Corporation brings truth to power: “Ontario is giving priority access to COVID-19 vaccines to some neighbourhoods that have been far less affected by the pandemic than other areas not designated as hot spots,” data analysis by CBC News reveals.

FPMag‘s close look at the electoral map tells the story. Ford needs those seats but opposition riding associations have a grip.

People need to push back against SARS2 not government clowns. Why waste your time? Are you with me?

Ordinary people will beat the SARS2 virus by using an easy medical solution, not a militaristic solution, as does Ontario’s authoritarian government:

If ordinary people don’t do these things, they will get themselves into trouble; and me too. That’s how it works. What Canadians and Americans have done thus far is extend the pandemic years for the entire human race. That’s how it is going. Sad. Look at Canada’s numbers. RECKLESS.

What impacts one impacts all in a pandemic. Wear your mask.

Medical solutions are needed to fight the SARS-CoV-2 Virus, not authoritarian forcefulness against a population that has “had enough”. The blowback will be harsh against Canadian leaders who try to pull a Tatmadaw on the people of Ontario.

Douglas Ford and his extremist Conservative Party are begging severe blowback as they smash democratic process in Ontario having failed miserably in their pandemic response and got caught lying about COVID-19 deaths in Ontario.
Medical solutions are needed to fight the SARS-CoV-2 Virus, not authoritarian forcefulness against a population that has “had enough”. The blowback will be harsh against Canadian leaders who try to pull a Tatmadaw on the people of Canada. That’s how it looks.
Pinterest File Photo Photo Art/Cropping/Enhancement: Rosa Yamamoto FPMag

A world away from Canada in a small village of Myanmar, what happens to these people happens to Canadians because of the pandemic. And vice versa.

People are standing up to the Tatmadaw authoritarians in Myanmar. Authoritarianism doesn’t work. 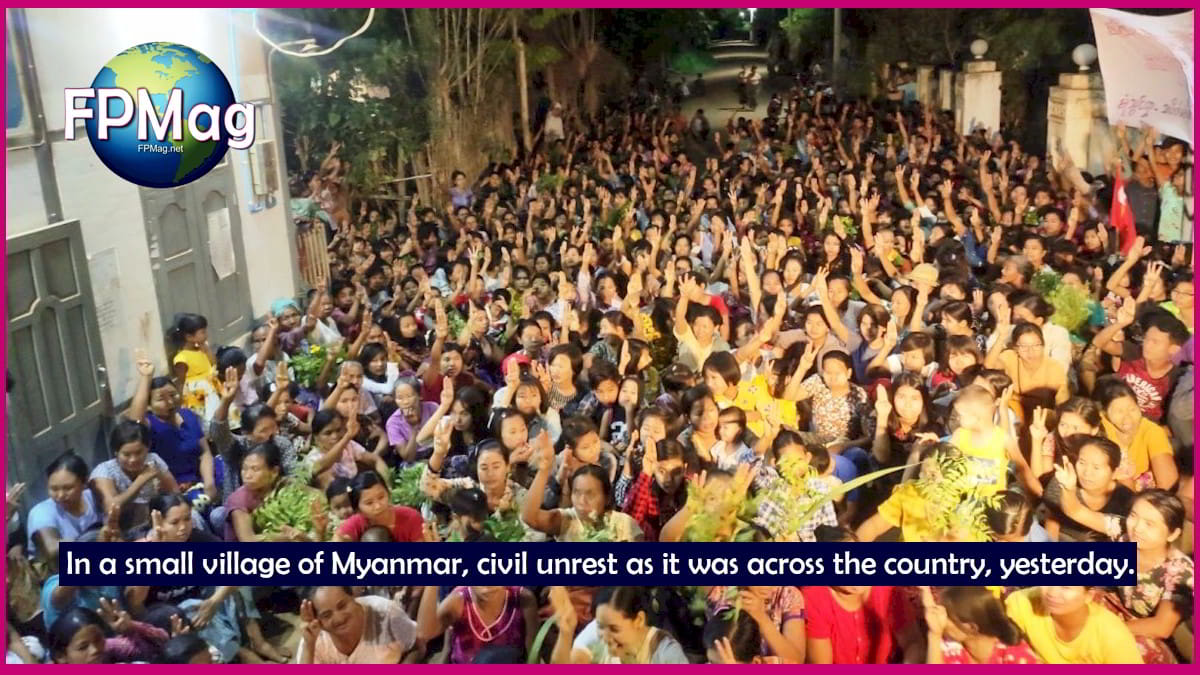 Standing up to the Tatmadaw authoritarians in Myanmar. In a small village of Myanmar, a country where the military in a coup has slaughtered hundreds and hundreds more have disappeared, people are in the streets. They have no money for masks. In a pandemic what happens to one of us happens to all of us as the saying goes. Photo is Source supplied. Art/Cropping/Enhancement: Rosa Yamamoto FPMag

The old normal is gone forever? This pandemic will last for years because the selfish world we all live in forgot that what happens to any one person in a pandemic happens to all people. It’s not too late to change that.

Herd Immunity may be 4.6 years away from tomorrow because of Vaccine Nationalism says a new study.  The new paradigm will see one after another waves of new variants, waves that are large and small surges.  It’s too late to stop mutations that scoff at the immunity of vaccines. Existing vaccines may already be less effective against some VOC.

Some computer models show this pandemic rolling out for over a decade killing most humans if vaccinations do not exceed 90%. The worst scenarios involve three to four years of unfettered infections wherein the virus learns far too much about the human body and morphs into something unstoppable.

Then there will be new pandemics. We know of viruses in the wild that can kill as many as 90% of those persons infected. Better wear your respirator mask when out.

Climate change is wiping out many species that leave behind their viral loads. Some of these viruses find a home in human bodies.

If Canada and the USA don’t help Mexico beat this SARS-CoV-2 and its ugly mutations, everyone is in touble.

One additional but most important step is to urge the Canadian government to assist poorer nations with weaker health care systems to vaccinate their populations.

That is reprehensible Vaccine Nationalism because it locks up millions of vaccinations that a country like Mexico could be using. Mexico has a case fatality rate of 9.2% and growing. That country will, no matter what America and Canada achieve, infect North America over and over and over again.

But Canada is not hogging as many vaccines as the United States and Britain. Between them there is a billion-plus excess vaccinations locked up and kept from countries desperately in need.

If the excess vaccines were going into arms among the two billion people around the South China Sea where Canada works with allies trying to start a war with China, the pandemic would flash bang gone.

Canada is spending many $millions to put on a naval shit-show designed to scare China or scare someone with its geriatric City Class 4,770-ton plus ‘destroyers’ (anything over 4000 tons is a destroyer not a frigate) slinking through the Taiwan Straight.

Being among the 2 billion people around the South China Sea I see the conduct of America and its allies as gutless and cringe worthy.

Either stand up to China, or bug off. Mankind’s spending two trillion dollars last year, $1 trillion from America and  another from TROTW  on more weapons is going to go down in history as the East/West move that set off the incipient stage of mankind’s removal from Earth. That money could have ended this horror show.

Mankind must address all past pandemics.

HIV/AIDS has been around for 40 years and still no vaccine. There are test vaccines but they are unfunded. The big pharmaceutical companies are not interested. Almost one  million people die from HIV/AIDS each year.

In Myanmar the leading cause of HIV is rape.

In some countries HIV/AIDS is the leading cause of death.

“HIV Test and Treat Projects have not stopped because of the pandemic. There is an even greater need to ‘test and treat’, ” says RINJ Woman Sharon Santiago from the Philippines. 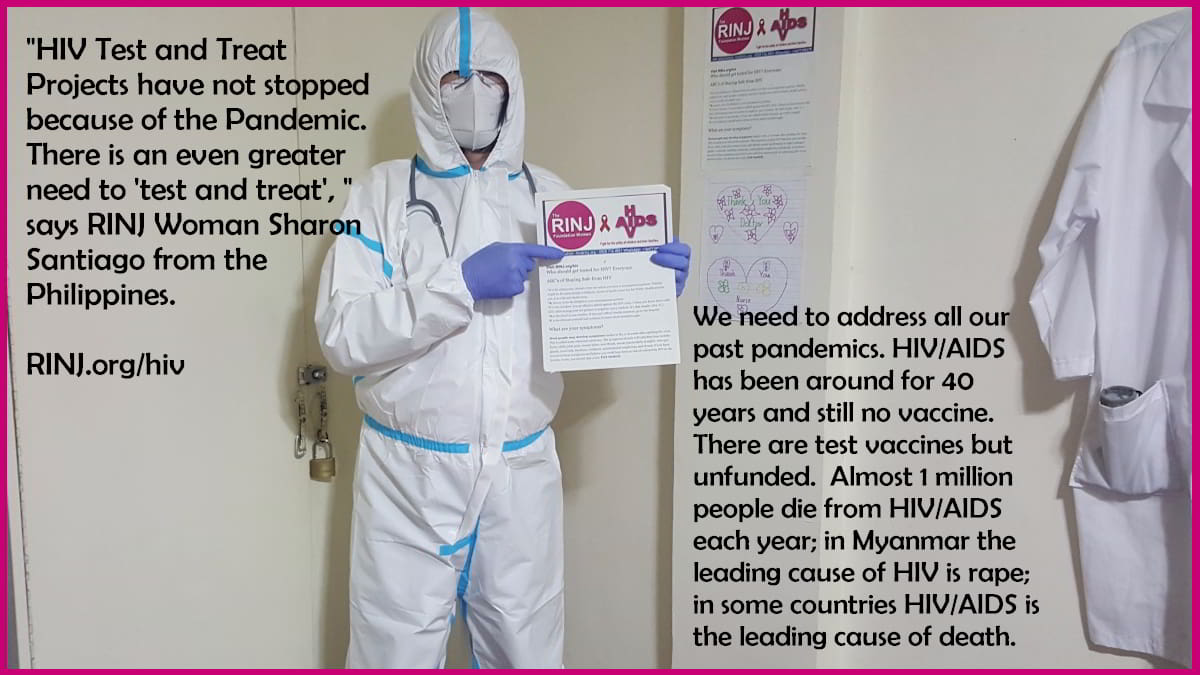 Author demonstrates PPE apparel needed during pandemic for Test-and-Treat- project in developing nations. We need to address all our past pandemics. HIV/AIDS has been around for 40 years and still no vaccine. There are test vaccines but unfunded. Almost 1 million people die from HIV/AIDS each year; in Myanmar the leading cause of HIV is rape; in some countries HIV/AIDS is the leading cause of death.  “HIV Test and Treat Projects have not stopped because of the Pandemic. There is an even greater need to ‘test and treat’, ” says RINJ Woman Sharon Santiago from the Philippines.
RINJ.org/hiv  Photo Credit: Sharon Santiago. Art/Cropping/Enhancement: Rosa Yamamoto FPMag

Three million people have died from COVID-19 in the past year. Some were friends. Some were parents, sisters, brothers, moms, dads. Nobody expected this. We miss our loved ones. Put on your mask and don’t be the next casualty, hoser.

Last Friday night I took a minute to walk down stairs in a hospital I was in and sat in the corner of the admitting room, watching the people come and go. There I was over 11,000 km from home in Toronto watching hell break lose.

One building of this Catholic, private hospital was FULL. It’s like this all around the world.

I thought about this ancient (likely over a million years ago in bats), primitive quasi-organism dividing us, defeating us, killing us.

I became a bunny-suited- masked, anonymous, Canadian, tired, no, I am exhausted, weeping tears in a quiet, dark corner for each one who died today. The cadavers were being wheeled out. 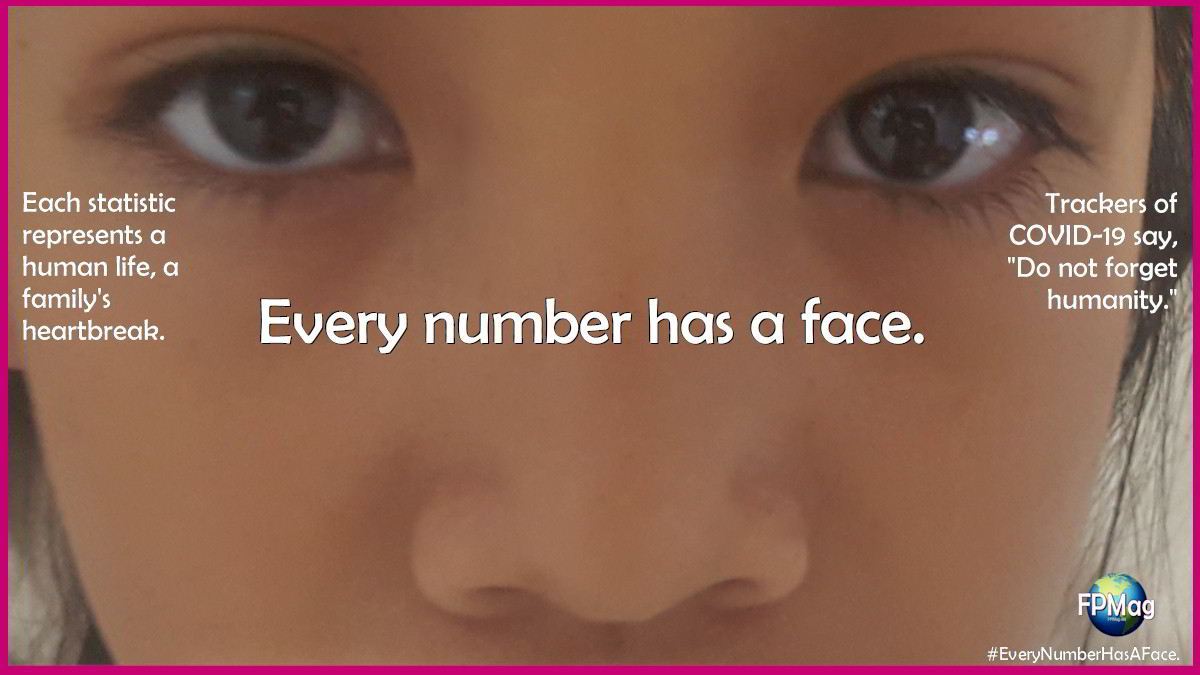 Every number has a face. Photo Credit: Melissa Hemingway

Canada’s Trend lines show active cases and sum of all cases rising daily at or near record levels despite vaccinations.

Soon the death counts will jump.  (Learn how to get vaccinated.)

Honestly, this is a behaviour issue. Canadians are reckless. No wonder governments are panicking with swat teams at the provincial borders. That is reckless too. Doug Ford is a Rodrigo Duterte Wannabe A military approach to pandemic mitigation is killing Filipinos and smashing their country. You want to try that, Doug Ford?

Education has not been tried by Canadians. Teaching Canadians how to mask up with FFP Respirators will end the surge. Europe is doing that.

“We’re losing the battle between the variants and vaccines,’’ Ontario’s premier, Doug Ford, said on Friday as he announced new draconian measures wherein cops in Ontario will now stop drivers or pedestrians and ask for their address and reason for being outdoors.

Police checkpoints will block provincial borders with Manitoba and Quebec but not on the US border. That would offend Americans going back and forth into Canada from the most infected nation on the planet. Ford and his extremists are dangerous to Canada and could end it if their totalitarian ways spread across the other Conservative Provinces. 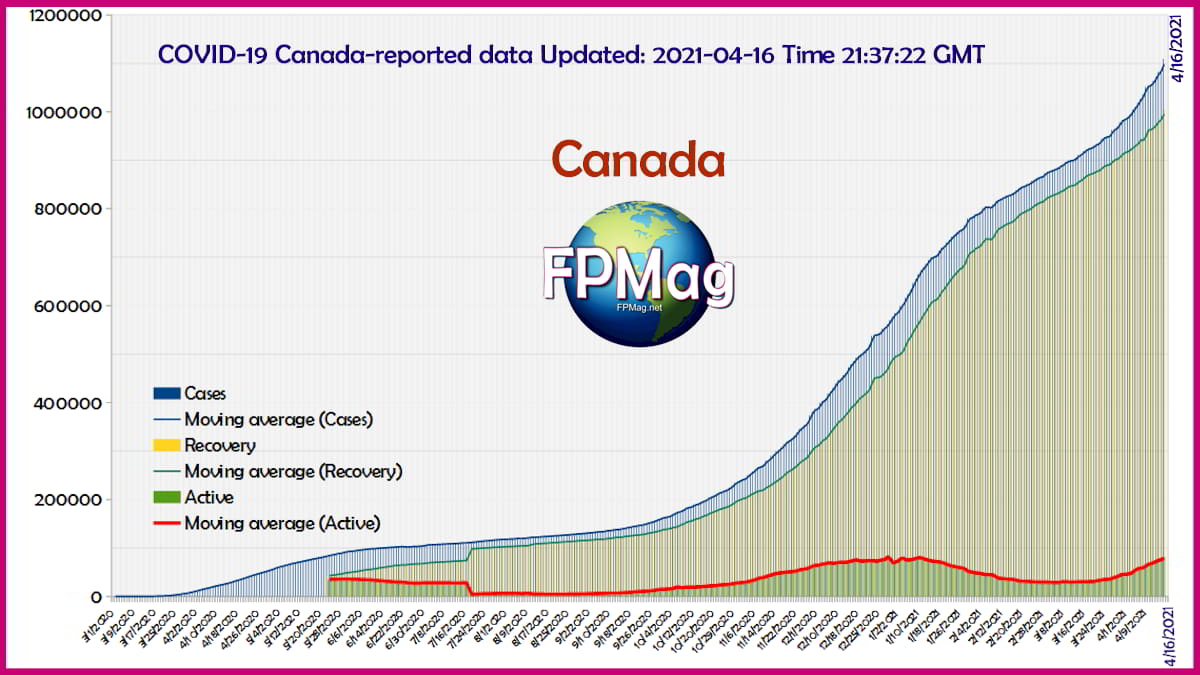 The article " Op-Ed: Canadian fail. A Pandemic is only stopped by all of us, not tyranny. Not Vaccine Nationalism either. " was written by Author: Micheal John OBrien (Biography, Email) Editor in Chief
Contact Micheal John OBrien on Twitter ~ Facebook ~ LinkedIn ~ Instagram ~ Find on Wikipedia ~ Find on YouTube