Since then, seven of the ISIS  hierarchy in Syria where the kill was sanctioned, lost their lives in what looks to some as a reprisal.

As the days roll off to the end of this week, it seems the murders of three very young women TV journalists (18-21) in the Afghan city of Jalalabad have not gone unpunished.

Seven senior ISIS planners and militants were shot dead in Syria overnight, 3-4 March, purportedly in an unrelated event but probably a retaliation, say enthusiastic gossiping locals along the Euphrates River in Syria. 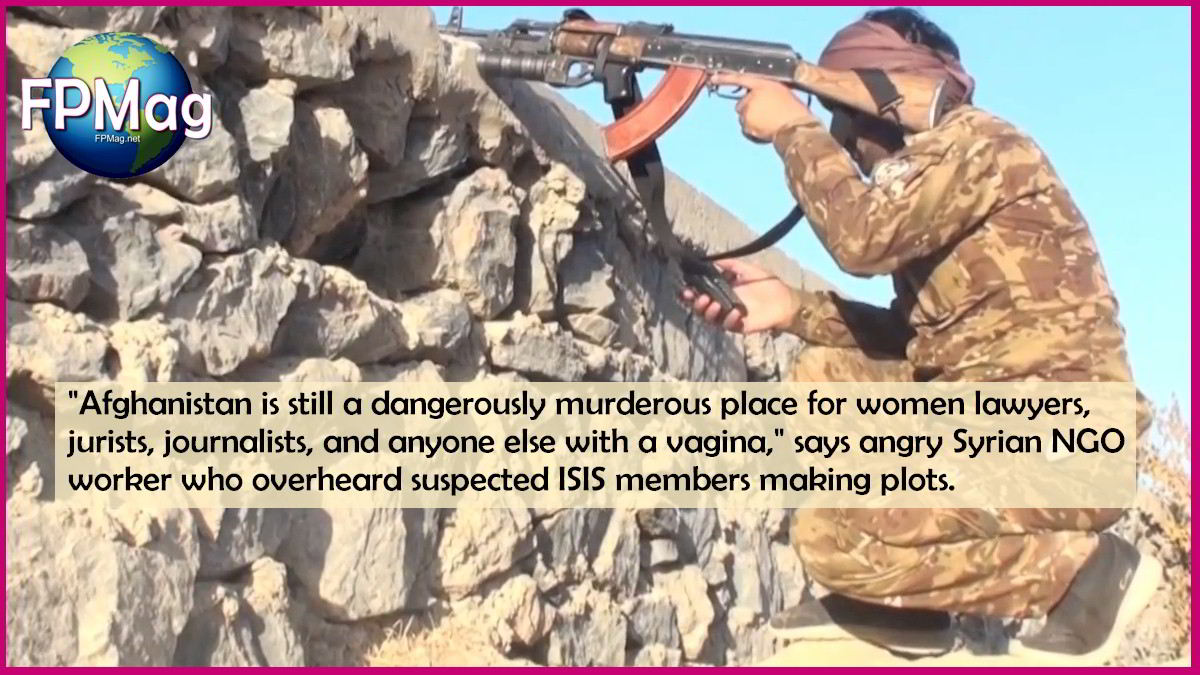 “The ironic fact is that these women-hating murderers were killed by a female arrest team that claim they were attempting a bounty arrest at the time of the events,” Katie Alsop reports from her sources in Syria, Iraq and Afghanistan as well as Turkey which had outstanding bounties on some of the ISIS operatives now deceased.

Turkish authorities say they did have an arrest request outstanding in the area but would not comment as is customary in ongoing security matters, they said.

The security agency is saying no more than what is in their statement.

“The recent deaths of seven ISIS operators in an occupied home and nearby cave between Al Quriyah and Al Tayyana, Syria, was not a result of a retaliation for the attacks on five women journalists by an ISIS affiliate in Jalalabad,” says the private security firm which has been operating in both regions.

“That ISIS enclave near the river had been responsible for numerous ambushes and sudden daylight attacks in recent months,” notes Gracie Edwards, who has met several men and women of that jihadist community because of health care needs at a local neutral clinic. 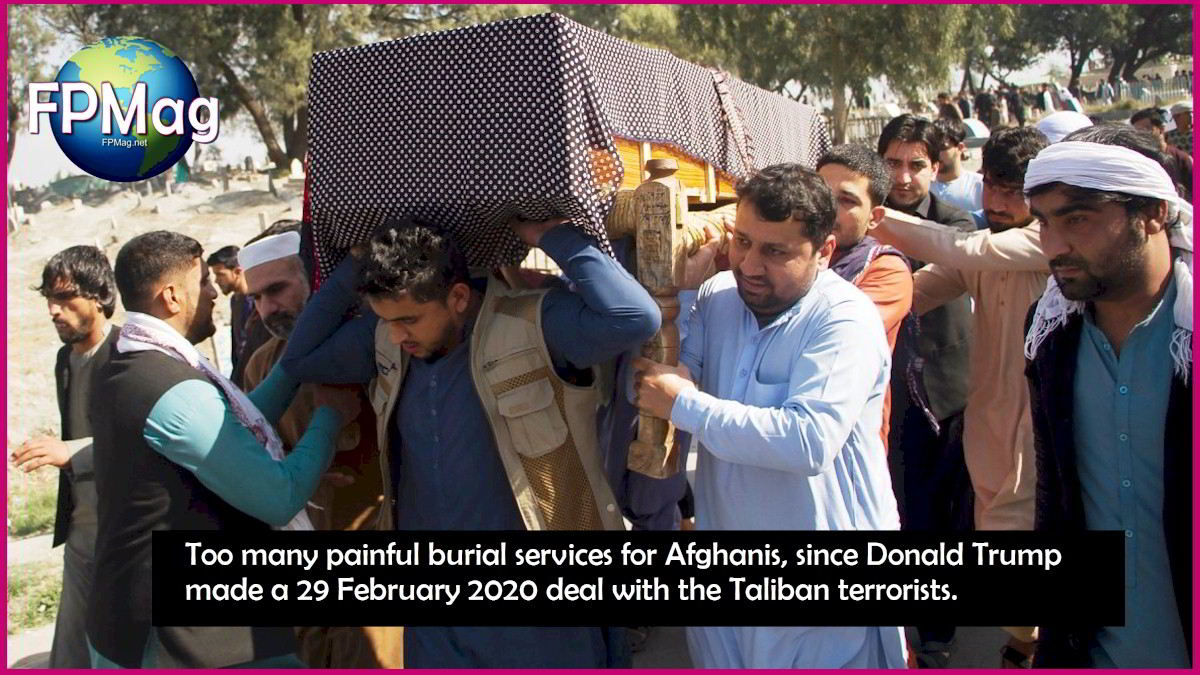 Too many painful burial services for Afghanis, since Donald Trump made a 29 February 2020 deal with the Taliban terrorists. Photo Credit: source Supplied. Published on Twitter. Art/Cropping/Enhancement: Rosa Yamamoto FPMag

Notwithstanding the claim of coincidence, reliable sources in Syria among the NGO medical workers there, allege that two ISIS affiliate strikes on 2 March 2021, against seven women journalists, that caused three deaths and two injuries in Jalalabad, Afghanistan, was given approval by a command enclave in Syria that has replaced the original command post in Idlib province that was destroyed by US Forces in October 2019. That group is closely related to the one hit on the night of 3-4 March.

“These allegations of complicity by the ISIS enclave near the Euphrates River are based on overheard conversations that were not relayed by witnesses until after the events,” reports Behar Abbasi, while speaking in a Zoom-type call with local worker, Gracie Edwards of RINJ Women in the governorate of  Deir ez-Zor in Syria.

Both The RINJ Foundation and the RINJ Women ‘s private security protection supplier have issued statements in the matter.

RINJ Women published the following video in requiem. According to Rose Catalano, a Canadian Director of the global women’s group, “this atrocity could not be worse and it will not go unaddressed with extreme prejudice because the popularity and youthfulness of the barely adult women in the their late teens and early 20s is stirring up a global thirst for action against ISIS, Taliban and Al-Qaeda with  ideology that claims to be the vanguard of Salafi Jihadism plus other salafi jihadist ‘lunatics’ who don’t even know why they are doing their killings.”

“Arresting criminals who threaten our people, and being paid a bounty is fine with me. Arrests for the bounties offered by law-abiding nations is a lawful and preemptive way of providing security for our operations in war zones. If militants resist violently, our security partners will take care of the details and we pray for their safety,” she added.

“The Skirmish yesterday with Islamic State of Iraq and Syria (ISIS) near Al Tayyana was not a reprisal for the killings in Jalalabad, Afghanistan as has been claimed in some spurious media activity of Afghanistan and Turkey.

Gracie Edwards is a liaison person between the RINJ Women working in the Middle East, Syria in particular, the RINJ director of Middle East operations for women and girls’ sanctuaries, safe houses and clinics; and the private security agency that provides their protective services.

Edwards is also a nurse working among three women’s shelters and clinics in Syria along the Euphrates river and into Idlib, Syria and has been there off and on since 2014, alternating between Mosul, Iraq, ar-Raqqa, Syria and Aleppo/Idlib over the years. Her birthplace is Aleppo but she immigrated to Canada as a child with her mother and returned to Syria after her college days in Canada, in 2013.

On Tuesday, she reported to her regional director and to the security agency that a young friend had been gunned down in Afghanistan while working for a Jalalabad broadcaster known as Enikass Television and that she personally, plus two women patients, had overheard suspected ISIS members bragging prior to the time of the event in the governorate of  Deir ez-Zor who were being treated for HIV infections with antiretroviral prophylaxis medications.

“They knew too much, too soon not to be directly connected, plus they have been suspected since 2018 of being a part of a Daesh (ISIS)  operations enclave near Al-Mayadin (which is also in governorate of  Deir ez-Zor) Edwards told Katie Alsop of FPMag.

“A further investigation revealed that one of the men was on a ‘quiet’ list of persons for whom the Turkish government and others were willing to pay a bounty for the arrest, detention and surrender for trial to the appropriate authorities,” reports Behar Abbasi who has remained closely apprised of the matter for FPMag  in three languages, with her contacts in the region.

“Two board members were contacted for approvals, along with the CEO, and  it was decided that the bounties would be much appreciated because fundraising has all but dried up during the pandemic with the exception of corporate partners who support the private security team’s  training and equipment in the battlefield in exchange for real time metrics on the function, effectiveness and ergonomics of their newest equipment,” reports Behar Abbasi.

An arrest was attempted but it apparently went sour and a skirmish broke out and the enclave was eliminated, say sources living close to the area, who said, “it was over quickly”, but who do not want to be identified for fear of reprisals. Some of these parties have asked for protection and a safe house away from the area until “things calm down”.

According to Dr. Buni who runs the regional medical and shelters operations the requests have already been granted.

“This is not how we planned to celebrate International Women’s Day around the world,” says Rose Catalano, a RINJ director.

Source supplied photograph believed to have been taken by RINJ Foundation members in Jalalabad, Afghanistan, recently published on Twitter and now in public domain.

In a phone call, the Foreign Ministers of Afghanistan and Japan have discussed the Afghan peace process, continuation of Japanese assistance to Afghanistan, aid effectiveness and the fight against corruption, the investigation into the assassination…https://t.co/OgmcxVrolV

Beverley, a spokesperson for the security team, confirmed the information but stipulated, “this was not a retaliation, it was an attempted arrest made through channels that would have led to the party being detained, transported to Turkey for questioning and probably held for trial on other charges while this matter was being investigated.”

“The crimes committed in Afghanistan have far reaching connections,” she commented,  and while America has abdicated its role in peacekeeping in Afghanistan as a result of the 29 February 2020, agreement with the Afghan government, other nations in the region must take action to minimize the security spillover the American withdrawal created.”

“Armed Resistance to an Arrest,” was alleged cause of the ISIS Slaughter

The spokesperson “Beverley” said further that there would be a published statement on the details and that no further details were known from the field than this:

“The armed resistance to the arrest resulted in 7 ISIS deaths and one injured captive woman who was harmed by a partial collapse of the building she was  detained within, unknown to the arresting party.  The innocent woman captive has since been evacuated to medical care and has within 24 hours made a full recovery according to her doctor and will soon be safely returned to her family which has been contacted.”

The statement continues to say that, “It likely would be better that the regional interests clean the matter up rather than count on America which would only repeat the same cycle anyway.”

Meanwhile, Maria Makrami of the Afghan Women Network (AWN) says, “I know I’m on the death list,” she said in an interview with Deutsche Welle, a highly regarded German public state-owned international broadcaster funded by the German federal tax budget.

“Our situation is frightening. Many women in our networks no longer leave their homes and are completely demoralized. After what happened yesterday in Jalalabad, I’m also completely devastated,” she told the German news broadcaster.

“I condemn the murders of Shahnaz Roafi, Sadia Sadat, and Mursal Wahidi. These latest killings follow a series of attacks against journalists and media workers in Afghanistan. The perpetrators of these killings must be brought to justice to stop the bloodshed of media workers, whose role in informing society,” said the The Director-General of UNESCO, Audrey Azoulay.

Japan releases statement on the killings in Jalalabad.