Idlib is scheduled for Total Destruction by 3-Pariahs

The three-pariahs cannot be trusted. They have used chemical weapons; have slaughtered half a million women and children; attacked civilian medical infrastructure; put a price on the heads of white-coats (nurses, doctors, EMS workers)  and are about to assail ONE MILLION CHILDREN in Idlib.

According to a Russian Army Major familiar with operations in Idlib, the Iranian/Syrian/Russian Forces assembled to attack Idlib region in Syria, the city and much of the south will be destroyed if all of the assembled force is brought to bear.

But the invasion is on hold for talks in Geneva to take place at the insistence of the UN Security Council, in initiatives spearheaded by Nikki Haley and Antonio Guterres. 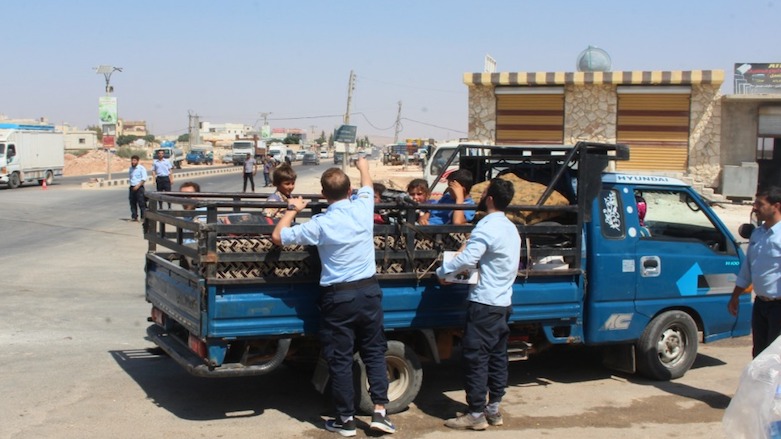 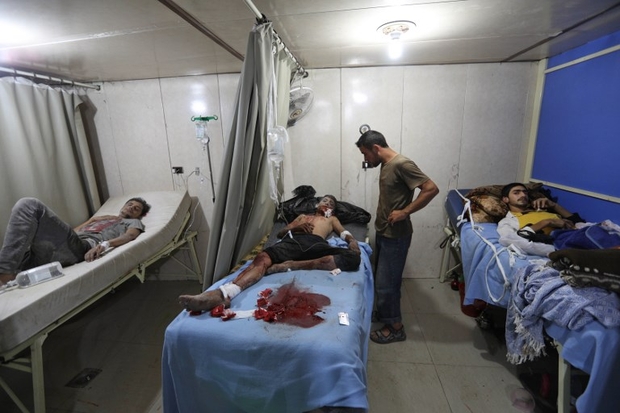 Ed. Note: Graphic content / Wounded Syrians lie in a hospital in Zardana, in the mostly rebel-held northern Syrian Idlib province, in this photograph, following air strikes in the area late on June 7, 2018. Air strikes in northwestern Syria, thought to have been carried out by regime ally Russia, killed 38 civilians including four children, a Britain-based monitor said. The raids, which hit a residential zone in the area of Zardana in the northwestern province of Idlib, also wounded 50 people, the Syrian Observatory for Human Rights monitoring group said. / AFP Photo / Credit: Omar Haj  Kadour

How Can Anyone Hold Talks with the Untrusted Three-Pariahs?

Turkey has made Olympic-class Efforts to Avert Disaster in Idlib

Feminine-Perspective: The three-pariahs cannot be trusted. They have used chemical weapons; have slaughtered half a million women and children; attacked civilian medical infrastructure; put a price on the heads of white-coats (nurses, doctors, EMS workers)  and are about to assail ONE MILLION CHILDREN in Idlib. If they kill just one child, and if the ICC maintains it’s status as having the potency of a wet tea bag, it needs to be replaced, or anarchy will rein supreme in its place.

Following the failed Trilateral talks a week ago wherein Turkey’s leader Recep Erdogan pleaded for common sense to prevail among the Iranians and Russians, another set of talks is underway in Geneva.

Mr. Erdogan has clearly stated that his country has absorbed millions of Syrian refugees and is not in a good position to handle more.

Turkey is dramatically increasing its military presence in Idlib.

The USA Has Taken a Stronger Role

Feminine-Perspective‘s  take on US Ambassador Haley’s remarks to the assembled UN Security Council is that the White House is planning significant military action in Syria.

I have been speaking with contacts all over Syria who are knowledgeable, and there is a sense of exasperation.

Fortunately the US (with allies) remains calm and stuck to its role of fighting ISIS as a matter of its own self-protection.

Our American friends in a southeastern part of Syria tell medical workers that there is not just a diversion from Trump’s political difficulties but a solid, universal effort to block the use of chemical weapons in Syria and to protect civilians.

But mid week, Nikki Haley, the U.S.’s UN envoy, seemed to change the ultimatum on Idlib saying that any wholesale attack on Idlib would result in dramatic action.

Thus far, the warring factions have been killing civilians, half a million or more. The chemical weapons don’t seem to be used against troops, only innocent residents or fleeing refugees are subjected to these attacks.

A global consensus seems to be that if any group needed to be taken to the wood shed it would be Assad and his armies.  But Russia is right in there  launching over 100 air strikes and according to eyewitness accounts from locals in Idlib, the consensus is that the attacks are against hospitals and emergency support infrastructure in Idlib governorate, particularly in the south. We have not confirmed that but there are several emotional accounts that have us checking further.

US intelligence seems to support what the locals are saying.

“Russia, Iran and Assad are demolishing Idlib and asking us to call it peace,” Nikki Haley, the U.S.’s UN envoy said in remarks before the Security Council early in the week.

From Putin on down, the Russians have lied through their teeth about almost anything to do with  Syria. Putin has Zero credibility despite some genuine efforts of his military forces to avoid conflicts every now and again.

Putin’s dishonesty about bombing targets and chemical weapons  does not bode well for Russia’s standing in the world but regardless, anything we write we try to get eyeball contact with, even if the reports come from people who fear to identify themselves. The conduct of parties to the Syrian civil war is beyond belief.

If people like Bashar al Assad and Rodrigo Duterte are emblematic of the character of Putin’s friend’s he is going downhill fast in his waning years.

The United Nations’ special envoy to Syria, Staffan de Mistura, began talks midweek in Geneva with officials from Turkey, Russia and Iran to discuss the establishment of a constitutional committee for Syria, part of a Moscow-led effort to include opposition groups in a negotiated solution to the seven-year Syrian conflict. The talks may end today.

On Tuesday 11 September, Antonio Guterres, UN Secretary General addressed the world from the UN in New York City and pretty much ‘rattled the rafters‘ as it is clear after the September 8th talks in Tehran that the parties to the conflict just do not get the message that their planned slaughter in Idlib will not be tolerated by the global community.

A bloodbath is pending in Idlib, nevertheless.

“It is absolutely essential to avoid a full-scale battle in Idlib.”  This would unleash a humanitarian nightmare unlike any seen in the blood-soaked Syrian conflict”, said Guterres. He continued:

Almost half of Idlib’s population of 2.9 million people had gone there to seek refuge from conflict elsewhere in Syria.  They include close to 1 million children.  Their lives have been upended and they have nowhere to go.

Idlib is the last so-called “de-escalation zone” in Syria.  It must not be transformed into a blood bath.

I understand that the present situation in Idlib is not sustainable and the presence of terrorist groups cannot be tolerated.  But, fighting terrorism does not absolve warring parties of their core obligations under international law. UN Secretary General

The Secretary General appealed to all parties directly and indirectly involved in Idlib — and in particular, the three guarantors of the de-escalation zone status of Idlib, namely Iran, Russian Federation and Turkey:  to “spare no effort to find solutions that protect civilians.  Preserve basic services and hospitals.  Ensure full respect for international humanitarian law.”