Russian and Syrian Forces have begun their onslaught of Idlib.

Another humanitarian disaster has begun.

South west of Aleppo about 45 slow kilometers on the M60 is Idlib governorate and the city by the same name, Idlib. ( Or you can use the faster M5 aka Damascus-Aleppo International Way to M4 cut off and then cut across to Idlib at the first right south west of M5 on M4. Never mind, any woman would explain it that way.)

It has been a beautiful city. The region is largely farmland but not like you might think if you farm potatoes in Idaho, USA. The Idlib region is very hot. Right now it is 4 in the morning and the temperature is 25 degrees C. It will go close to 40 today. That’s over 100F. And the bombs have been falling now for two days which makes it hotter and dustier  — and scarier. The end of Idlib is coming. 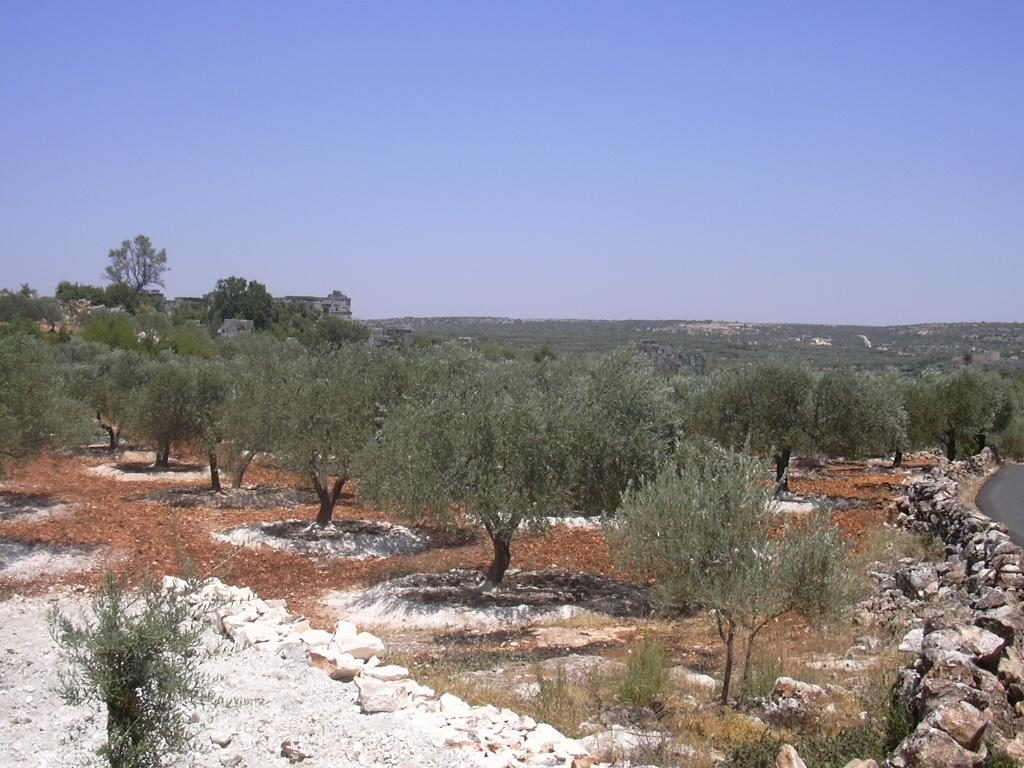 Idlib has always been famous for its amazing Olive Orchards although it has amazing history and ancient archaeology. Photo Credit: Faswad, Creative Commons

Today Idlib is becoming well known for its crazies and olives are pretty much forgotten. Sad. These people below are the former al-Nursra. They are criminals and they are groups of men who have been with many criminal organizations, usually Salafi jihadists or mercenary opportunists who just need a meal or two per day and a gun to go kill people.

They hate Bashar al Assad which is understandable because he is the dictator of Syria and as such is a brutal murdering criminal himself. He started a civil war in 2011 by slaughtering innocent peaceful demonstrators. He clearly underestimated how angry ordinary people would become. It blew up in his face. Years of civil war have destroyed this country.

But Russia and Iran want a piece of Syria. So does Turkey. They are all involved in the fighting.

So is America whose brave young men tried to help the civilians who also tried to form into a defending group after Assad attacked ordinary people in peaceful demonstration in 2011 and 2012. I have met many of these good people who opposed Assad who in my view is the most vile creature on earth. Even a tiger would not eat Assad because the tiger would be ill and die.  My cultural background has its ways of thinking you may not understand.

Nevertheless Assad has brought out the worst in the Middle East. Warring factions representing religion, regions and ethnic groups fight every day. Probably more than 100 different named groups have been involved in the fighting.

A number of meetings will take place tomorrow. Russia has done a very good job of meeting with all sides to various regional disputes and offering a way out of conflict. Many of the people in Idlib came here as a result of leaving a place that was dealing with the Russians and promised safe egress from their base. They landed here. It’s the last major battle in the Syrian Civil War. Can it be stopped? Please.

Now Idlib is a million and a quarter people who came from somewhere else. That is my estimate after listening to other sources. I don’t know the number. I have read that 700,000 people could be displaced. That’s a small number. There are already about 12 million people displaced.

Idlib is a worse problem. Half the population is from somewhere else.

They have nowhere else to go so they will stay and fight in what will be their prolonged and disastrous massacre that will impact all of the indigenous peoples of the city and province.

I am worried about the people being killed right now. There are explosions and I expect those are Russian artillery guns and bombs.

They all have chemical weapons.

Assad is the most boisterous user of chemical weapons that kill large numbers sof people and the State of Syria has many different weapons it makes itself and others it buys from Russia and some from North Korea and Iran. I hear that from soldiers and fighters I have treated. We have also seen things on trucks and got help from contacts to explain what we are looking at.

I know from being in the thick of things because I was too slow to get out of the way. The chemical attacks of the terrorists and so-called freedom fighters are basically bleach. That’s what it smells like and that’s how it works, like bleach, it’s awful but if you don’t drink any or breath it with vinegar and things like that it might get mixed with by accident, you’ll be OK in a day or so. If you are in a basement or closed off area, get out and run to another safety room.

The chemicals Assad is using, I assure you will kill you in a very painful way. I have seen people die this way, me powerless to help more after I have emptied my syringe in them too late. I have seen corpses with the pained looks. Children even. But its the bombs and bullets that kill the most.

We know ISIS has stolen chemical weapons from the ancient Semitic city Palmyra in Homs Governorate.  The group formerly known as al Nursra which is in Idlib as well as al Quaeda have both used chemical weapons. These gang members have migrated from one group to another. Chlorine is still their favourite. The smell scares men. Women know it is bleach and know how to be careful.

People play games with the shock and fear of chemical weapons but bombs, bullets and artillery shells are what kill civilians here in Syria. Those civilians who survive the weapons face death from malnutrition, disease and poor medical care in the aftermath of big battles.

We have decided that we are not going to name rebel groups (which are often fighting with each other and killing hundreds of nearby civilians as in the south of Idlib about three months ago) because that only seems to give them some kind of credibility which none deserve. There are no good guys anymore, don’t let anyone fool you in that. The Syrian Liberation Front seems to have morphed into something else that is ugly and desperate. They don’t represent the people of Syria who just want this war to end.

All the fighters are men without a real purpose any longer, willing to kill nearly a million ordinary scared civilians who don’t know what the hell to believe.

But these crazies are not the only people living in Idlib. It has been considered a relatively safe area for families of young fighting men with small children to find safe harbour.

The normal pre-war population of a quarter million in the actual city and that same number in the surrounding environs has likely doubled according to United Nations estimates and what you can see. 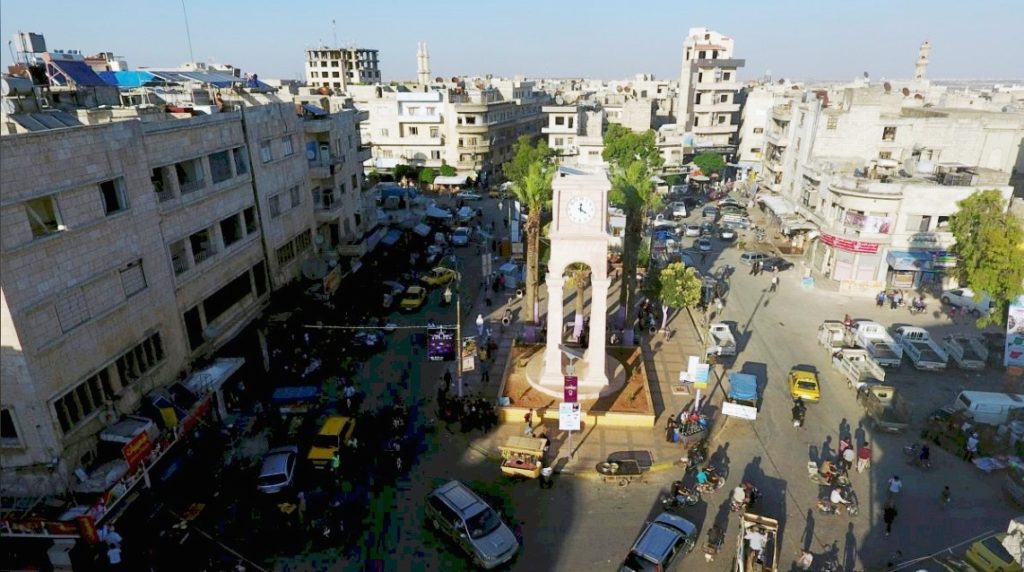 This is the Idlib Clock Tower shot from a drone on June 8, 2017 at twenty past noon. Photo credit: drone operator REUTERS/Ammar Abdullah

Tomorrow, I will be on the far east side of this country when the parties meet in Tehran, Iran and at the UN Security Council.

Mr. Erdogan of Turkey is trying to help find a solution and stop the massacre of Idlib as a neighbour of Syria and having an interest in the northern border of Turkey/Syria.

If these men do not find a solution it will be because these men wanted blood:

Putin, Assad and Hassan Rouhani, each being authoritarian leaders, have shown that they are in Syria to prove they are good at killing. It seems that way. Russia has done plenty of good by dealing with people Assad can’t stand and getting both sides to walk away. Do it again, Mr. Putin. If you attack Idlib, that will be the proof that you exist for nothing more than killing because Idlib is only a shooting gallery.