A US-sponsored assassination of Bashar al-Assad was alleged to have been discussed or even planned by US President Donald Trump. That is not too surprising, is it? Somebody had a bullet for good people like Abraham, Martin and John, so why not a round for a pariah like Bashar al-Assad?

His murder would not morally differ from the US state-sponsored murder of Usama bin Mohammed bin Awad bin Ladin in Pakistan. It’s  premeditated murder.

A trial for bin-Ladin would have been revealing.

Assad must be brought to trial or the entire global accountability regime is a shameless facade, a fake rule-of-law of the United Nations Security Council. 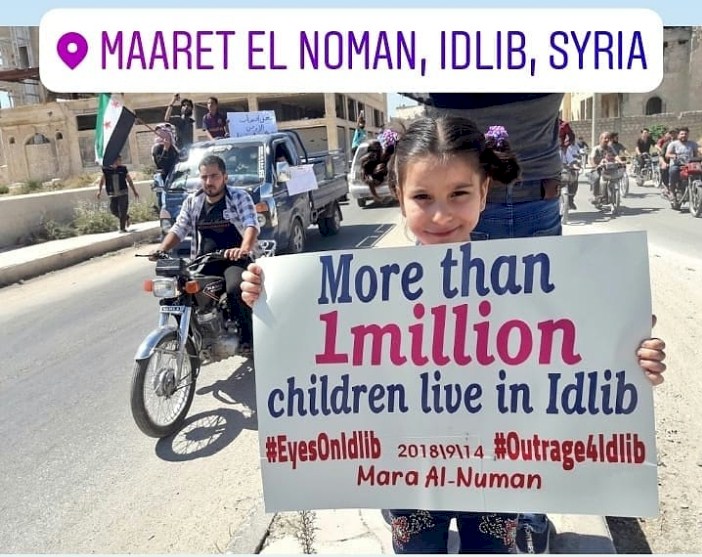 Kids in Idlib allegedly say they are angry at Assad too! Three million civilians are in harm’s way as are a couple hundred thousand men with guns and little reason or will to live. Photo: Syrian Defence Forces propaganda Captured from @Marwa76175721 September 15th post to Twitter by a “child account”.

Don’t you think the emotion of wanting to kill Bashar al-Assad is perfectly normal if morally centred as self-defence by extension where the will is to protect innocents targeted by this brutal mass murderer?

Remember:
Assad’s Chemical weapons attacks on women and children left to die a horrible death or live with painful injuries suffered for months or years afterwards? (Angry yet?) 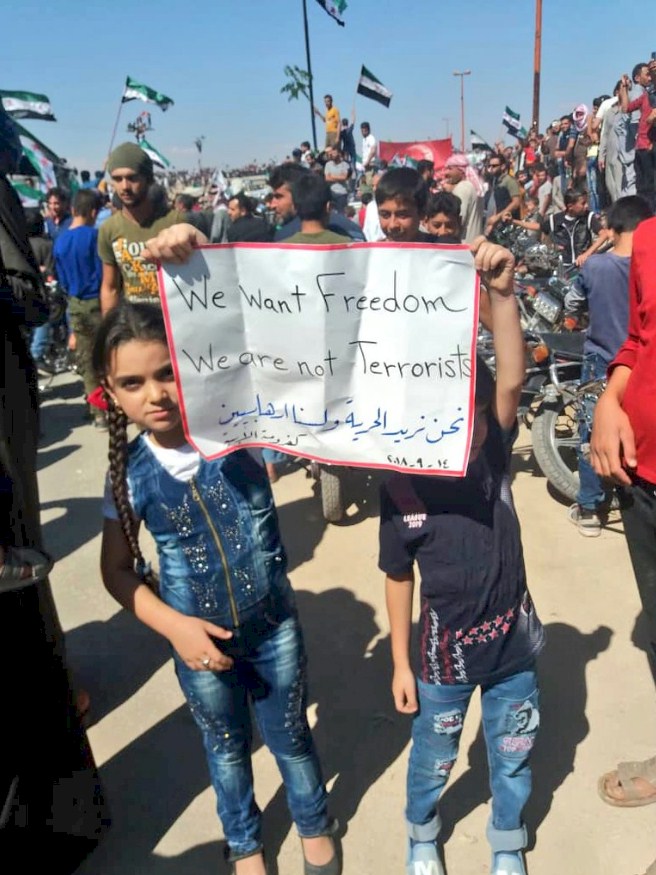 Two of many photographs of children being exploited by politically motivated adults. These are captures from one of many ( https://twitter.com/Marwa76175721 ) Twitter accounts popping up since July. The point is that all sides have exploited children.

But it gets worse. 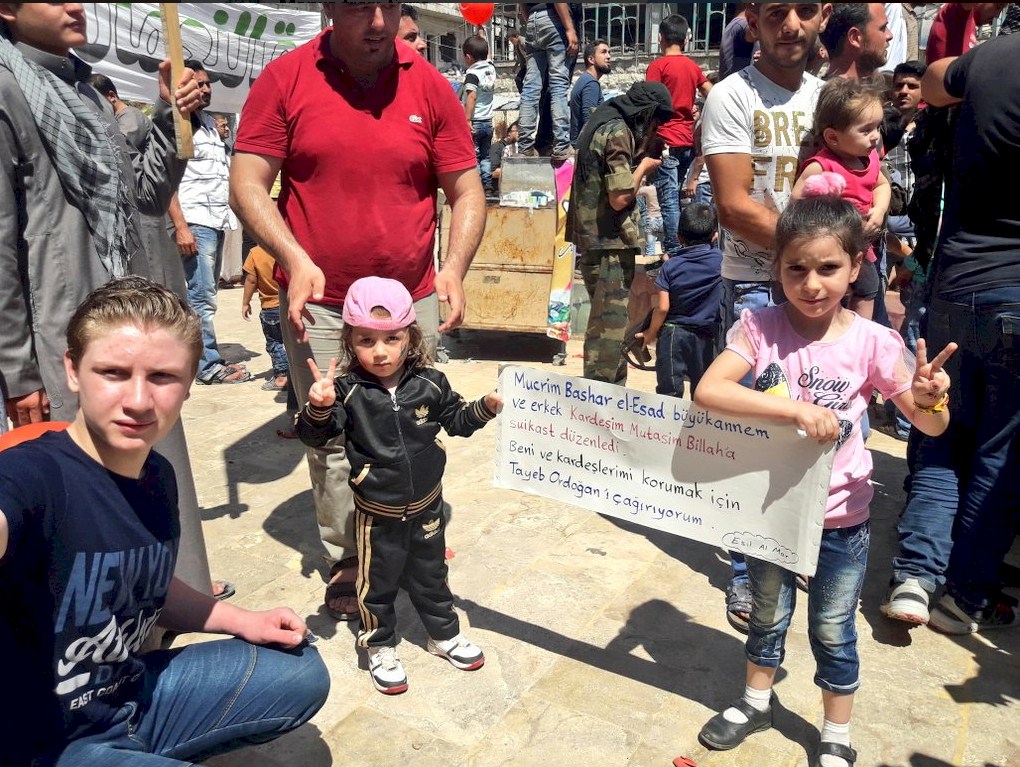 Photo: Twitter from @Marwa76175721, one of the many children’s accounts posting hundreds of photographs of children, many very gruesome.

This links to  an horrific image of an infant killed by a barrel bomb. It is from the same child Twitter Account as above and here. We chose not to publish the image but make it available to researchers and future historians. (Marwa from Syria‏ @Marwa76175721 Sep 9 Omayah Alroz, little angel killed today after regime forces targeted her home with explosive barrel bombs in #Habait town south #Idlib.)

Of course, to be angry at Assad’s conduct is normal. But the world needs to know the henchmen and stop them too.

The world needs to know also about the conduct of the West and its exploitation of children or the exploitation that it supports.

Kids as young as four and five don’t understand the things they are asked to say in videos and carry as protest signs. Four and five-year-old children don’t know how to create their own Twitter accounts. Kids should not be used in the fight against Assad. This seems like criminal conduct. Here are some older kids, Noor and Alaa.

Assad is needed on a witness stand and held in prison thereafter where investigators can ask him questions and scientists can study his screwed-up brain.

But the misconduct is coming from all directions.

UN #Syria Commision of Inquiry’s @UNCoISyria latest report found new instances of use of #Chemical weapons by the regime, and exposed egregious actions by warring parties. Canada condemns use of chemical weapons & calls for adherence to international law. https://t.co/JUCZqxTPe0 https://t.co/b2rJl7Emcj

Count on it having a lot to do with global overpopulation of humans and the lowered value of human life. It’s a form of madness, because killing off humans at some point leads to extinction. Self destruction could be a manifestation of a certain madness.

There’s another theory. Blame the USA and its culture of death.

Since WWII the USA has been responsible for millions of deaths in direct wars or proxy wars. The culture of death is owned and promoted by America. By now, that culture has proliferated.

Modern day television and the movie theatre have taught multiple generations that murder is an acceptable surreal solution to our likes and dislikes. But in reality it doesn’t work that way. Doing such an assassination as a nation-state is not allowed. It’s a heinous crime and an act of war.

In Assad’s case its a waste of risk and time. There are many people in high places who are party to Assad’s sins. Their status and power were brought to them by Assad and they have no place else to go if Assad leaves the living behind. They will carry on his work and seize the power he had. Things might even get worse.

Assassinating Assad is a fool’s game. He can and should be arrested, detained and tried for crimes against humanity and a host of other premeditated violations of international law. The same applies to hundreds of henchmen/accomplices.

Talk of Assad’s Assassination is Smoke and Mirrors.

Bob Woodward is a sucker for a story and like all Americans he is absolutely consumed with American navel-gazing. Americans have a warped concept of what is going on around the world, if they know anything at all.
In that context Trump is promising ‘fire and fury’ if Syria uses chemical weapons in the Idlib region of Syria. But Trump would not know the truth of who is using chemical weapons in the Middle East.

Several credible reports by both RT and Sputnik suggest that Syrian Rebels have brought cannisters of Chlorine into Jisr al-Shughur city not far from the Orontes River in Idlib province, and have video-recorded a staged chemical attack.

According to Feminine-Perspective sources who spoke to Behar Abassi near Aleppo, chemical weapons preparation is a story less about Assad and more about Iranian militias.

Some of the many Shia militia groups, say Shia fighters willing to talk to Feminine-Perspective, including Hezbollah fighters and Shiite militias from Iran, Iraq, Pakistan and Afghanistan which fight alongside the forces of the Syrian president Assad, are guilty.

They, according to insiders who speak in only general terms, have deployed and occasionally used WMD/C against the grass-roots rebels opposed to Assad. WMD/C refers to weaponized chlorine liquid and nerve agents (although possibly decayed in effectiveness because of age).

The Russian Ministry of Defence has declared that staged use of chemical weapons is backed by the USA to provide an excuse for the use dozens of its 200 Tomahawk cruise missiles now in position in the Mediterranean.

These militias enumerate in aggregate including Lebanon’s Hezbollah to more than 200,000 troops according to Philip Smyth of the Washington Institute, a US-based Middle-East think tank. Moreover, Iran, in controlling these groups has outpaced Syria’s Assad. Most of these groups, says Smyth,  report either directly or indirectly to the Iranian Quds Force, the foreign expeditionary arm of Iran’s Revolutionary Guard.

Iran’s goal of exploiting compromised regimes in the Middle East as it has done in Iraq and Lebanon, extends to Syria where Russia has an interest as well.

That Iran and Russia are appearing to be allied to Bashar al-Assad, is coincidental to each nation’s desire to exploit weakness in the Middle East. Iran is empire-building.

What is Russia doing and with whom?

Are Russia and Iran strange bedfellows in Syria? No, not really. Think about the history of the two regions going back to the early 1500s. It’s a history with strong tales of both rivalry and collaboration. Today the  two are very close in many ways. Trade, economics and military goals are merged like never before in history. But the undertone of rivalry still exists.

Donald Trump in the eyes of strategic thinkers who publicly declare their thoughts, has done some clever things and some very stupid things with his maestro-like control over US foreign policy.

Was US Reneging on the Iran Nuclear Deal as bad as they say?

The USA created then withdrew from the Iran Joint Comprehensive Plan of Action (JCPOA) Iran Nuclear Deal Of July 14, 2015.

Future historians will likely gasp during 20/20 hindsight on the American withdrawal from the Iran nuclear deal made under the Obama administration after many years of good hard work by Britain, France, Europe, Iran and North America.

America has three significant enemies and a monster rival. Russian Federation, Iran, and the Peoples Democratic Republic of Korea (DPRK) are avowed enemies. China is a formidable rival to the United States. America united its three enemies and pushed China toward the trio.

China is an historically natural ally of Persia (Iran). Russia is a strategic ally and a trading partner of Iran as is North Korea (DPRK). Western sanctions have bonded the three significantly but by increasing sanctions on Iran, the United states has married its three enemies in trade relations and alienated much of Europe.

Trump has created the optimum recipe for disaster and the fall from dominance of the United States. Worse yet, the only way the US can gain power back is with military force. War.

Russia knows this full well and has been preparing itself to win that war. It has weapon systems under development that will make it the nuclear super power–the country that can fight a nuclear war and win. Earth will not survive say the experts but Russia will have won.