Warning to men:
Asia is nearing a nuclear holocaust. Stand down. 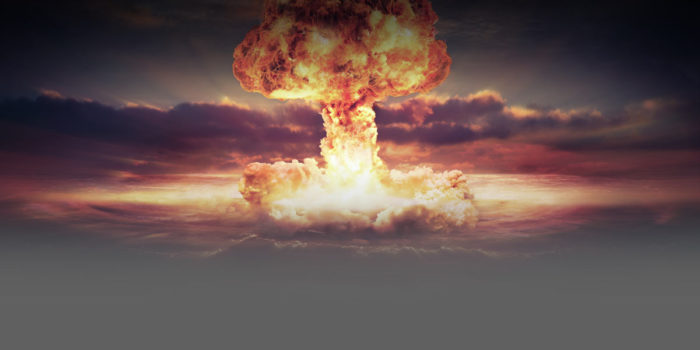 According to RINJ South East Asia Regional Manager Sharon Santiago in Manila, Philippines,  ordinary people in the provinces of most Asian countries are terrified at the the threat of nuclear war in their regions. Women have been making preparations for war. Pyongyang is nearly empty.

Both USA leader Donald Trump and North Korean leader Kim Jong-un have threatened to kill millions of civilians and destroy each other’s countries. The Rhetoric of the two has rallied armies of men willing to kill millions in this irrational fight over who can have nuclear weapons and who cannot.

During a September 2017 meeting of women on the RINJ Board of  Advisors in Toronto it was decided to try and rally women around the world to use their influence and encourage these warring males to stand down and start resolving their issues through peaceful dialogue.

As a global humanitarian women’s group, the RINJ Women are asking other women and children around the world to use their influence, to tell their leaders to stand down. We want peace and safety for every woman and child on Earth and that is the patriarch’s new first responsibility. Nuclear war is off the table. War is off the table. The only thing to be at the table must be caring and sharing world leaders willing to cooperate, communicate and build trusts together with everyone to fight the challenges humankind is faced with.

Astonishingly two of the most renown misogynists on Planet Earth hold everyone’s attention speaking publicly about their respective patriarchies killing millions of Asians in East and South East Asia because these two males are angry at each other. Their jingoistic snarling is accelerating as they demonstrate rage and hysteria toward each other.

These men are the worst terrorists of the 21st Century yet. 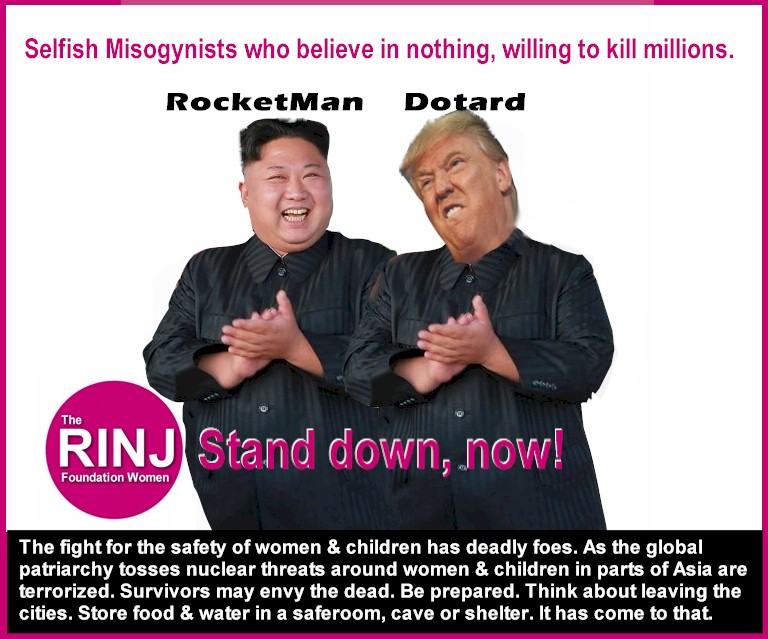 North America & Europe may be hurt. Asia will end.

At risk are parts of Russia and China; also at risk are all of Japan, Korea, Taiwan, Philippines, Indonesia, Malaysia, Vietnam, Thailand, Laos, Cambodia and more in close, densely populated regions of Asia.

Nuclear fallout will cause radiation sickness the world over.

Probably all of Asia will be impacted if Iran joins the war. It has been testing ballistic missiles and has for twenty nine years maintained a relationship with North Korea over weaponizing each others existing research and resources.

Trump, (dotard) you are a foolish old man with a fat personality disorder who has lost rationality. Play nicely or go into a home.

Kim Jong-un (rocketman) you are a clever but misguided leader of a false paradigm. Fix your people’s problems with sound reasoning and their freedom, not war preparations. Feed your people, now, as a first priority.
BOTH OF YOU, STAND DOWN NOW.

As the global patriarchy tosses nuclear threats around, women & children in parts of Asia are terrorized. Feeling hungry and alone is not enough, you two have to threaten women and their kids with the most horrifying death. Survivors may envy the dead.

Be prepared, mothers. Think about leaving the cities. Store food & water in a safe room, cave or shelter. Save your children if you can. It has come to that.
Many Asians fear a nuclear holocaust. The credibility issues to this fear are nonexistent. It is a reasonable fear.

There are no capable world leaders to bring the warring patriarchy to the discussion table. Women are instead speaking out and urging all women to use their influence to prevent war.

Each one of us surrendering to love, social cooperation and altruism versus hatred, separation and greed, will change the current path of a misogynist world. Read Misogyny Defined.