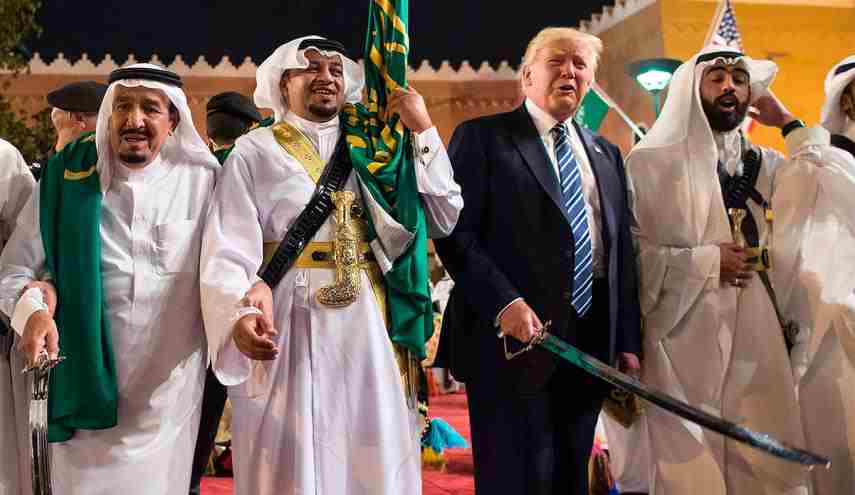 Donald Trump Sword Dancing with the House of Saud  at King Abdulaziz Conference Center in Riyadh on May 21, 2017- Photo Credit: Screen capture from alkawthartv.com

Last night, speaking at a Republican Party rally in the US state of Mississippi, Trump said: “I love the king, King Salman, but I said, ‘King, we’re protecting you. You might not be there for two weeks without us. You have to pay for your military, you have to pay.’”

Public protests can get you beheaded in Saudi Arabia. The same is true of starting anything that the government might call a political party; criticising the criticism-worthy royal family; starting a labour union or anything that the government might call a labour union; and calling the Crown Prince names on Facebook.  Saudi Arabia is basically the state version of its terrorist understudy Abu Bakr al-Baghdadi’s (dob 28 July 1971)  non-state Islamic State. We note that  Trump supports the universal canons of terrorist misconduct.

Feminine-Perspective: So, Mr. Trump. Thanks for honestly admitting that it is you who is propping up Saudi Arabian human rights violations. Now do something about human rights in Saudi Arabia or face the canon of public disgust.

Where is Mr. Khashoggi? Jamal Ahmad Khashoggi is a Saudi Arabia journalist, a columnist, an author and the former GM and editor-in-chief of Al Arab News Channel.

Jamal Ahmad Khashoggi has recently been critical of Saudi Arabia in his guest editorials in US publications. Now he is gone and Saudi officials are trying to sneak him from Istanbul through Ankara to Riyadh. The world will want him freed but most particularly, his fiancee, Hatice Cengiz was about to marry him once his divorce was finalized. He had to walk into a Saudi consular office yesterday and now he is missing.

A Kurdish FPM source involved in the Turkish government in Istanbul told us on condition she not be named that Khashoggi was visiting with his Turkish fiancee Hatice Cengiz.

Mr. Khashoggi’s fiancee had been with Mr. Khashoggi on Tuesday a little after noon when he went to visit the Saudi Arabia consular office in order to secure documents they needed to finalize a divorce and subsequently remarry.

She was getting worried at around 2:30 yesterday but waited until the end of business hours to call Turkish Police.

Relations between Saudi Arbia and Turkey have been strained lately over political alliances that put the two head-to-Head about Quatar and the Turk’s alliance with Iran on the Syrian crisis. The Saudis are not giving the Turkish police the time of day.

On 6 August, Saudi Arabia prosecutors  in a special court that tries suspected terrorists and human rights activists advanced that 30-year old Israa al-Ghomgham and 4 other human-rights activists be sentenced to death by beheading. This will have to be confirmed by a court on 28 October 2018 and in the event of an affirmative decision in favour of the prosecution, King Salman must rubber stamp the execution.

A series of attacks on women protesters has been launched by Saudi Crown Prince Mohhamad bin Salman, the second highest authority in Saudi Arabia, second to the king, but the de facto leader on a day-to-day basis.

The United Nations in mid-2018 asked Saudi Arabia to “unconditionally release all human rights defenders and activists who have been detained for their peaceful human rights work, including their decades-long campaigns for the lifting of the driving ban for women.”

We Want Our Girls Released by the Saudi Terrorist State

This is Israa al-Ghomgham. The Saudis want to execute her because she demonstrated on behalf of Shi’ite Muslims but Saudi population and the House of Saud are Sunni Muslim. She has been imprisoned in harsh conditions for 33 months. If the House of Saud beheads this women, Feminine-Perspective predicts the eventual end of the House of Saud.  (Photo Credit: Screen capture from Saudi TV)

The House of Saud alleges that Israa al-Ghomgham is guilty of participating in protests in al-Qatif and documenting these protests on social media; providing moral support to rioters by participating in funerals of protesters killed during clashes with security forces; committing forgery by using a passport photo of another woman on her Facebook account; violating Article 6 of the [Saudi]  Anti-Cyber Crime law” through, among other things, advocating for protests and posting photos and videos of protests on Facebook.

So, Mr. Trump. Thanks for admitting that it is you who is propping up Saudi Arabian human rights violations. Now do something about human rights in Saudi Arabia or face the canon of public disgust.