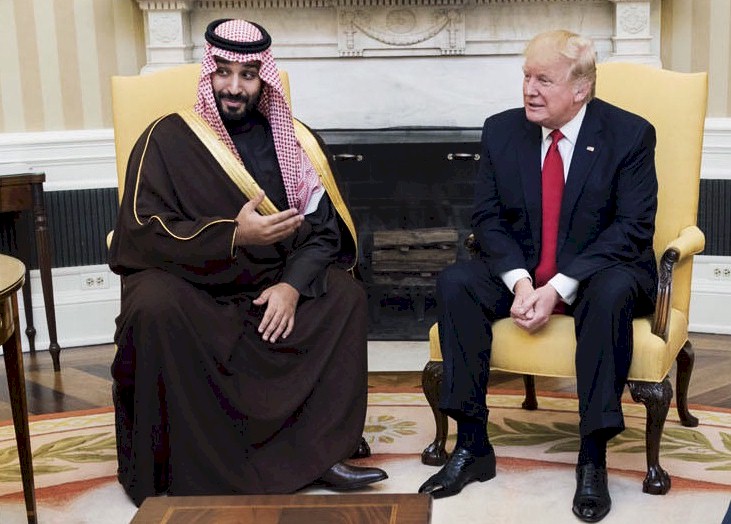 That Donald Trump is a party to a state-sponsored abduction attempt against Washington Post columnist Khashoggi, the way it was spelled out, is right and proper.

For dangerously inexperienced President Donald Trump, this is quite a burden under the circumstances.

I recall my dear friend Canadian General Richard Rohmer who wrote columns for me, years ago. He published a novel in which he foretold of a multinational conflict in the Middle East. It got ugly when killing someone triggered global nuclear war.

In the matter of Jamal Khashoggi, politicians and diplomats need to take a deep breathe and come back with honest answers. This crisis now pushes some serious global  threat scenarios near to life.

Trump and MbS are amoral incompetents and might not manage this crisis well. They need help.

Saudi Crown Prince Mohammad Bin Salman (MbS) acted correctly when he communicated through friendship channels to the White House that he intended to lure Mr. Jamal Khashoggi to a consular office of the Kingdom of Saudi Arabia (KSA).

Trump deserved to know. Khashoggi was at the time applying for USA citizenship and had somehow achieved some form of resident status, therefore diplomacy called for at least a warning and at best a discussion to avoid an international incident.

One country advising a host of a “person of interest” in a crime and the offended nation wishes to exert an action without extradition, starts to head for sketchy diplomatic territory.  Discussion and concurrence is necessary. An inexperienced Trump failed to see the implicit danger and is in this up to his eyebrows.

Certainly many a criminal has been caught this way. The subject is lured with a promise or inducement to attend a consulate or embassy and upon entry the fugitive has crossed a real border and the laws of that country inside that border apply fully. The subject is then arrested, detained in a lawful manner, and brought with all available haste to a magistrate with jurisdictional authority and the prosecutor must then show cause to hold the suspect in detention and win the argument of cause or on the Court of Jurisdiction contrary findings, release the subject.

But the Khashoggi case goes sideways on the standards that the request is made.

No cited criminal violation exists for the entire charade. Beyond this, the world will be truly shocked at what happened to Khashoggi.

US Intelligence briefings long ago, even some made public,  on Saudi Arabia, included the warning that MbS would abduct Jamal Khashoggi. No cause of merit has been shown.

Donald Trump has always thought himself to be above the law, always lacked empathy, hence he missed this fine point: Khashoggi had committed no crime.

Prima Facia the Jamal Khashoggi abduction plan looked unimportant but past the face of it, there is no reasonable suspicion that a crime had been committed by the Washington Post columnist therefore the abduction scheme was itself a crime, even in its planning it was criminal. The fact that it is state-sponsored makes it an act of war against the United States. Regardless of Trump nodding his head, American law and international law forbid what just happened. America looks again like a jackass.

It’s worse than that. It’s all based on a psychopathic whim of MbS who verily believed Khashoggi had insulted him with something he wrote in a newspaper column.

Like-minded Trump concurred. Donald Trump would have no feelings for a US resident columnist like Khashoggi, but he hates the Washington Post, which he has successfully hurt. Yes. The people Trump calls “The Enemy of The People” are shattered or in some cases in tears or have that lump in their throat that’s impossible to describe.

Now Mr. Khashoggi is dead according to Donald Trump who has the insider knowledge of a conspirator (‘killed by rogues’ he says).  A matter of happenstance for Trump is now a nightmare because of the President’s amoral conscience plus lack of relevant diplomatic experience. This is Trump’s first foreign policy crisis and because of billions of US dollars in immoral arms sales going to MbS whose family Trump worships like God because it is worth 1.4 trillion USD, this crisis nudges into reality global-threat scenarios of fundamental extremism. Sunni KSA is slaughtering Shia Yemenis with Trump’s help and Trump doesn’t get it. But there is more and it is worse.

So here is the problem I with a million angry women foresee: