US President Donald Trump is in very big trouble. 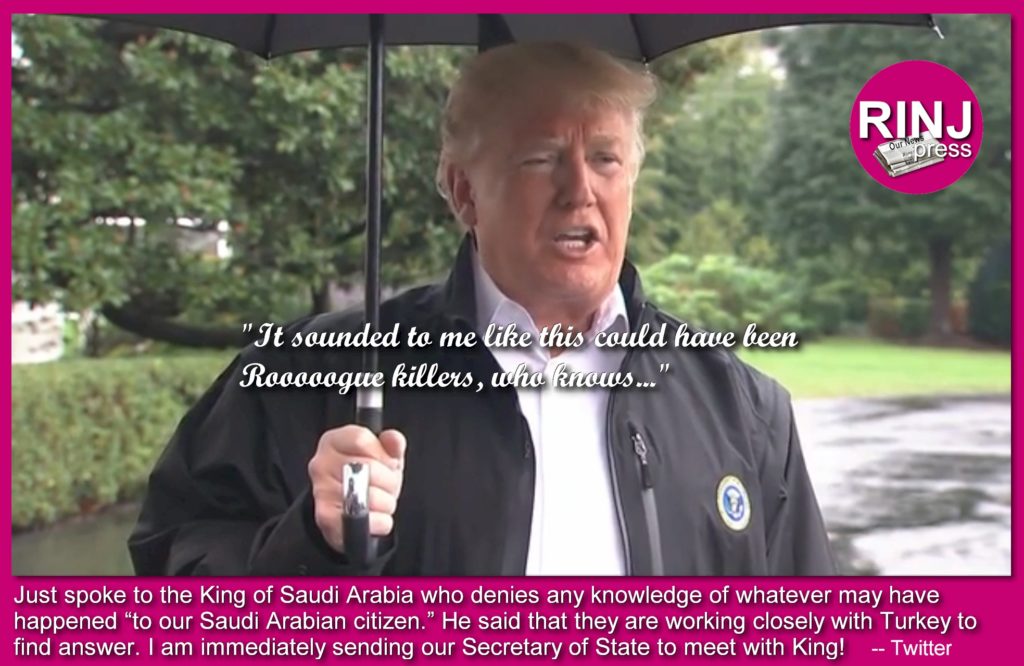 “Spoke to the King of Saudi Arabia who denies any knowledge of whatever may have happened  “to our Saudi Arabian citizen.” He said that they are working closely with Turkey to find answer. I am immediately sending our Secretary of State to meet with King!” — (Twitter) Photo Credit: Screen Capture from NY Times Video.

Saudi Arabians have threatened that the House of Saud will raise the price of oil to $200 per barrel. Go nuts. It’s about time humans stopped using fossil fuels. Earth will become unlivable if we don’t stop destroying the environment with the worst hydrocarbon contaminants.

Saudi Arabia has the ability to take power from the rich and hand it back to the masses by carrying out its threats. Bring it on. This will make the Houthis free people and end Saud’s slaughtering of the innocents in Yemen. It will be messy but it needs to happen anyway because all that is now is not working out.

But what made Trump and MbS  think abducting  a journalist would fly?

Enemy of the People

This is a state-sponsored murder of a journalist by utter buffoons led by MbS and Trump.

Killing Jamal was a last straw that tops mocking Ford; makes killing a bus load of babies on 9 August deliberate; and turns a global infrastructure of misogynists into THE ENEMY OF THE PEOPLE.

Many politicians and diplomats from Europe and across Asia and in North America are dancing around this thing saying they seek an investigation that is transparent. They are the transparents.

They are led by their own terrifying fear of Saudi Crown Prince Mohammad Bin Salman (MbS)  and US President Donald John Trump as a co-conspirator.

You had better fear ordinary me, more.

You knew, Donald Trump, that this would be happening and you did not warn Jamal.

I think Donald Trump knows how we know. We moved our source to safety.

US President, Donald Trump who is featured in a Theory of the Crime, says he just spoke to King bin Salman (about the missing Jamal Khashoggi).

Trump says the King has no idea what happened in Saudi Arabia insofar as Jamal Khashoggi is concerned and that the King denies… (what?)

Women members of The RINJ Foundation  close to the de facto authoritarian leader of Saudi Arabia say that the old King likely is telling the truth. He is in fact, they insist, not running the country and has literally no idea of what the day to day events of Saudi Arabia might be. They imply that he is senile, limited in function, and that Saudi Crown Prince Mohammad Bin Salman (MbS) and his supporters are the actual leadership of Saudi Arabia. The splintering of power in Saudi Arabia is on the King, but it is too late for him.

Theory of the Crime (Synopsis)

On or after 28 September, and before 2 October, Donald Trump was notified by MbS. that there would be an abduction of Jamal Khashoggi.

Trump was given an opportunity to protest.

A subset of the House of Saud now running the country under MbS in a brutal manner, put together two teams of males including forensic clean-up man Salah Muhammad al-Tubaiqi who has the unique skill of chopping up bodies into small pieces for disposal. He is a clean up man in this mission. The team also included two current bodyguards of MbS.

Among a group of Saudi men who first arrived early in the morning of 2 October at the residence of the Saudi Consul General, a building that is 300 meters or so from the Saudi consulate,  allegedly killed Jamal Khashoggi around 2:00 to 2:30 p.m.

Chronology of the Murder

2 October at  3:13 a.m., a general aviation flight carrying nine Saudi officials from various departments arrived at the general aviation side of Ataturk Airport in Istanbul having departed from Riyadh,  according to their manifest, clight plan and the Turkish news outlet Sabah. The aircraft type was a Gulfstream IV registered to the corporate owner of Sky Prime Aviation Services, Riyadh.

2 October at 1:14 p.m., Jamal Khashoggi, leaving his fiancee at the sidewalk, entered the Saudi Consulate in Istanbul to attend a preset appointment with a consulate clerk. Little did he know that clerk had been told not to return after lunch break.

13 October – Mr. Khashoggi, on the evidence and on statements of the Turkish investigative authorities, is presumed deceased. No remains are yet recovered, but that could change at any minute. 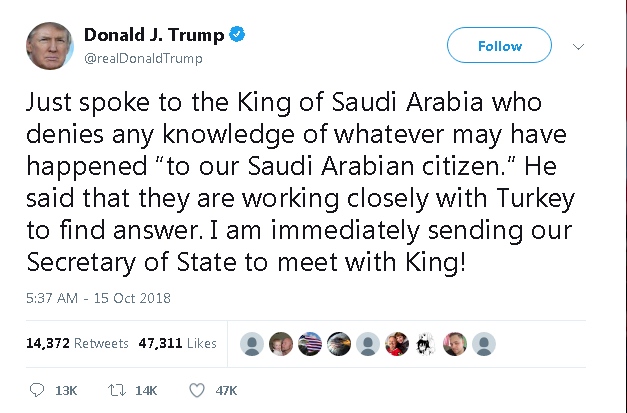 Just spoke to the King of Saudi Arabia who denies any knowledge of whatever may have happened “to our Saudi Arabian citizen.” He said that they are working closely with Turkey to find answer. I am immediately sending our Secretary of State to meet with King! 5:37 AM – 15 Oct 2018 — Twitter

Articles related to this topic: