Trump attacks on the Media 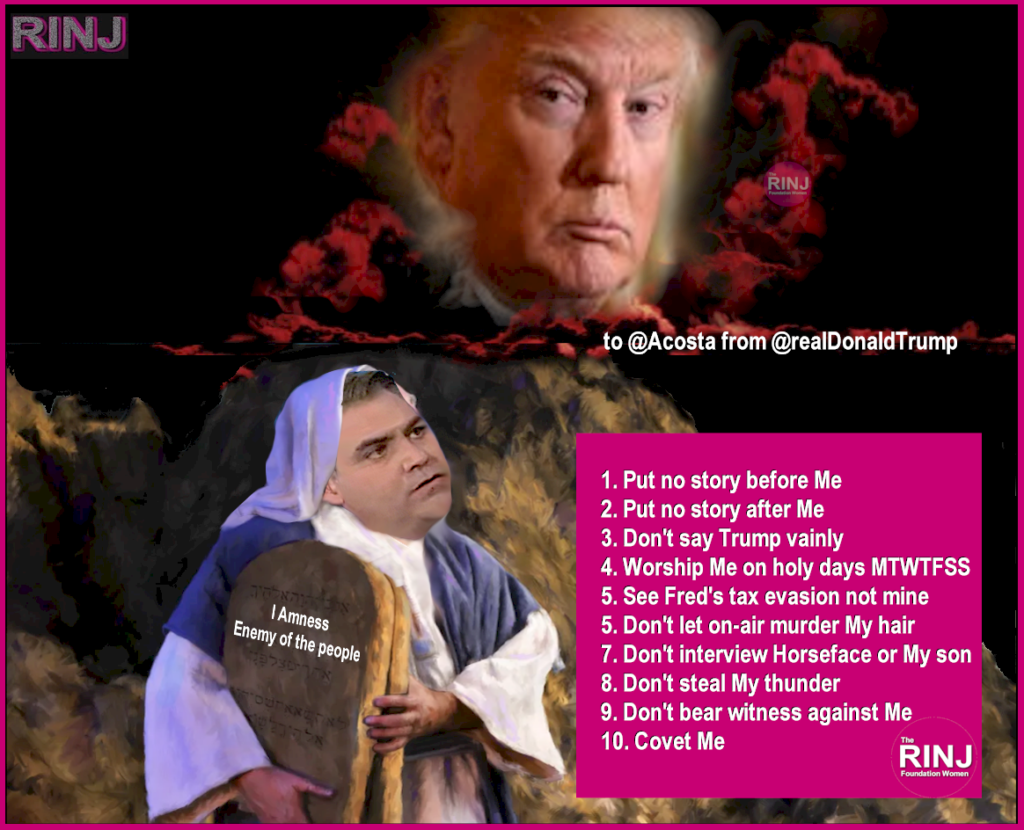 Feminine-Perspective Magazine’s Rosa Yamamoto posted on Twitter a sobering thought after arting this meme. The ten commandments from #Trump to @Acosta Somehow I (Rosa) lost fun of doing a meme cuz I was thinking of #JamalKhashoggi.   :'(   I am sure #MBS brought Trump in on that, Be careful Mr. Jim Acosta Trump is dangerously abusing power.

Donald Trump is ‘training’ the news media for some bad news. Possibly he faces impeachment in the new year; probably his son will be indicted for doing the ‘dirty work’ of his personal businesses. This is in his mind, real or not, as his political party generally took a “shellacking” at the polls during the 2018 Mid Term Elections this week. Many governor seats fell to the Democrats and the House of Representatives, potentially the White House’s worst enemy, goes to the control of his opposing political party, the US Democrats, in January.

The new rules for journalists at CNN are set out in a series of Ten Commandments, compiled on the basis of things that He, doesn’t like and things He does like.

1. Put no story before Me
2. Put no story after Me
3. Don’t say Trump vainly
4. Worship Me on holy days MTWTFSS
5. See Fred’s tax evasion not mine
5. Don’t let on-air murder My hair
7. Don’t interview Horseface or My son
8. Don’t steal My thunder
9. Don’t bear witness against Me
10. Covet Me

Fox News apparently does not need this lecture because it abides completely.

On the other hand, Fox News is decidedly not news media but the cheering section for some kind of Cult that has been named and renamed by observers who struggle to define what they are seeing.

But it is spreading as Authoritarianism around the world as democracy takes a back seat to lunacy and self-destruction.

This is a problem serious enough to get global note.  In August the United Nations spoke out about US President Trump’s attacks on the media. This was before:

The ten commandments from #Trump to @Acosta
Somehow I (Rosa) lost fun of doing a meme cuz I was thinking of #JamalKhashoggi. :'( I am sure #MBS brought Trump in on that, Be careful Mr. Jim Acosta Trump is dangerously abusing power. Abt ratings. I just switched from Fox to #CNN pic.twitter.com/FnB2owkuLI