Kindle warm spirits or December could be hell.

These are the stories that FPMag writers are covering from a feminine perspective this December. Despite the many new lies of politicians and their cronies, all of the real truths point to compassion, tolerance, understanding, and peace. 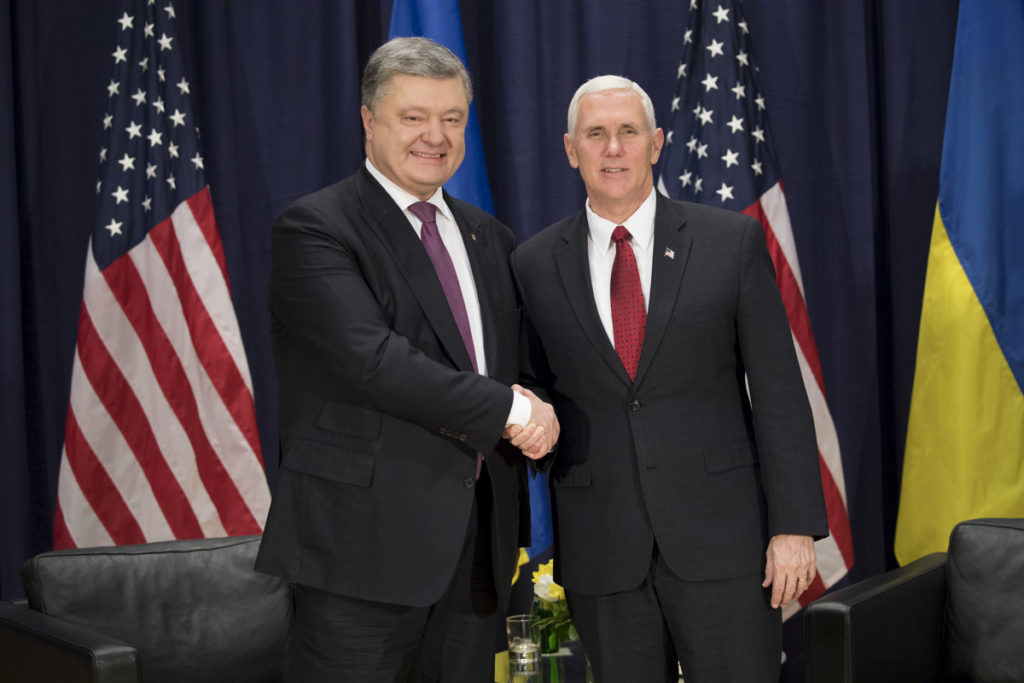 As we roll into the last month of 2018, Ukrainian and Russian military forces are staring down gun barrels at each other. The Russian side does not want to admit that. Maybe it is true that retired Russian military men are forming up with family members in the Ukraine to force a breakaway. But the populations of both sides are tiring of their politicians. Vladimir Putin while not at the top of his political popularity still enjoys a winning likelihood.  On the Ukrainian side, however, polls say the Ukrainian leader is politically dead already and he should go away.

Russians in Russia and Russians in the Ukraine say they want to be together. It’s a family fight. Ask any cop about interfering in family violence incidents. Both sides will hate you. So how do you promote peace?

Both sides behave despicably in a Ukrainian civil war wherein Russians in border areas in the east of the Ukraine want to breakaway to Russia.

It is instructive to note that America and Europe have no regard for what the people want. The Western politicians have told their constituents that Putin has encouraged the Russians in Crimea and Ukraine to want to be part of Russia. The absurdities are endlessly scripted by dinosaurs living in an expired paradigm that was written by Stalin and Eisenhower.

Feminine Perspective: Male politicians today are not much interested in serving their constituents nor do they wish to hear the views of their constituents judging by their willingness to murder or support murderers of journalists. More women are needed, comprising at least 50% of governments around the world.

NATO has vowed to collectively and individually as members continue to arm Ukraine and donate military resources to fly and sail the Black Sea area as a provocation toward Russia.

Basically that means that NATO’s defence industrial base will continue to make money from the Ukraine at least, because in this conflict it is not selling weapons to both sides as it often does.  And also, owing to world pressure, its financial jackpot in Yemen will dry up soon.

NATO has zero credibility given that the catastrophe in Yemen is brought to the world by the members of NATO.

NATO’s defence industrial base has contributed to every one of the 100,000 estimated Yemeni death toll which is rising at 2,000  to 3,000 per day. How much money did they get? Many billions of US dollars? FPMag will be reporting in detail later in December.

Feminine perspective: Arms manufacturers should be curtailed and compelled for the same money to produce grains and other foodstuffs to feed the 43 million hungry Americans and the starving people around the world. Donald Trump lied when he said $100 billion in arms sales to Saudi Arabia to slaughter Yemenis would create half a million to a million USA jobs.  Only 20,000 jobs would be created, while 14 million Yemenis are killed,  if you believe the United Nation’s and the Washington Post’s research. Other research within the defence industry says no additional jobs are created because in the alternative to selling bombs to Saudi Arabia, the US Air Force which is at only 50% readiness, needs the bombs for its own supplies. Focussing on feeding the hungry for the same money would indeed employ real millions of Americans with higher skills-retention in food production and distribution careers that would last. Everyone needs to eat.

NATO needs to leave the Ukraine. It’s actions may compel further invasion of the Ukraine by Russia. Clearly Russia has been preparing for many months to be able to deliver this option if provoked or if it sees either a target of financial opportunity or a strategic geography opportunity.  Being realistic, only the latter applies, prima facia.

NATO would better serve its constituents by forcing a ceasefire in Yemen instead of starting a new war around the Black Sea.

Behaviour in Family Quarrels is Proof:
We all have a little of everything that’s bad in us.

Russian military involvement with separatists in the Ukraine is secretive. Even separatist leader Alexander Zakharchenko says that Russian troops may be helping separatists but only while on leave. This situation is explosively dangerous.

Referring back to our question, what the cops might tell you is that you must approach with hat in hand and no firearms. Encouraging dialogue and maintaining dialogue for calmness and good function of society is why the people pay politicians’ and diplomats’ salaries.

Russia’s Behaviour is Predictable.
Its Aggression is prompted by Belligerence

Russians see everyone but Russians as threatening outsiders. Sadly, Russians have many family members in the Ukraine. The reverse is of course true.

Poroshenko has now banned all male Russians entering the Ukraine hence splitting up families. It’s a provocative gesture because this doomed politician needs a war so that he can cling to power. He has all the wrong people advising him including CIA operators and both US State Department and US military advisors.

The loss of almost one quarter its population, as many as 20 million civilians, in WWII left Russians fearful. It is a poignant part of their core. Antagonism of this fear from the West via America’s (says Trump) NATO is once again pushing for war. But don’t underestimate Vladimir Putin. He has managed to keep his people fed and Russia alive without the third world war that the West has repeatedly threatened.

Sanctions against Russia are hurting the country following the 2014 annexation of the willing (a 95% pro-Russia plebiscite ) population of Crimea.

The Danger of two leaders needing a war.

Both Donald Trump the leader of the USA and Petro Oleksiyovych Poroshenko, president of the Ukraine need a war to distract voters and impeachers. That’s a big problem for world peace.

Poroshenko is working the crowd of anti-Russian states and asking for more weapons and naval vessels put at his disposal.

Poroshenko has reprehensibly declared Martial Law in ten provinces of the Ukraine which appears to have backfired, making the public dislike him even more. A recent poll put his support at 17%.

Since 2014 the American/NATO puppet government of Poroshenko has fumbled the ball and the economy of the country has crashed. The population is furious at both Poroshenko and Trump who both could meet a street-marching Ukrainian lynch mob in Kiev, people are that angry.

Western readers have been tricked by the anti-Russian slant of Western media. However it was pro-Russian protests by Ukrainians across southern and eastern Ukraine, which escalated into an armed conflict. Similarly the annexation of Crimea was what the people apparently wanted.

Fact: millions of Ukrainians would rather be part of Russia.

Families are split by national borders. It is very much like a family feud that was given rise by the break up of the Soviet Union. American-run NATO talking heads sound like idiots in the context of taking side in a matrimonial dispute.

“Poroshenko is incompetent”, say the Ukrainians in the polls. He faces an election in March, likely by that time with popular support equal to the global love for drunken clowns flying airliners.

The Kerch Strait Incident and why Western media turned against the cop to coddle the bad guy is an interesting thesis. (Watch for a coming FPMag feature “The Putin Paradox”.)

US President Trump is at war with the media but his mouth keeps spewing ammunition with which the media can write headlines like this one.

The Honduras Caravan has been tear-gassed. The world is watching kids on submitted smartphone videos struggling and running from tear gas lobbed at them. Uncounted completely unarmed children with their families are being attacked by the mighty USA. This will come to a head in December. 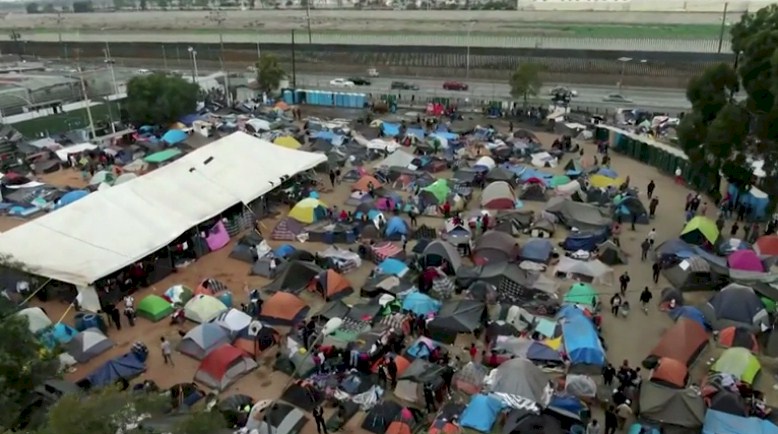 Tijuana, Mexico. Not just American weapons and tear gas, but health issues of high morbidity put 5,000 people living in tents at a sports center in Tijuana at risk near the US border. Photo credit: CNN TV Screen Capture.

Violence in Europe is Induced by Inflamed Israeli-Palestinian Conflict

The conflict between the Palestinians and the Israelis has seen its worst year in recent history based on the number of incidents occurring now daily. The disrespect of the so-called “Two-State Solution” by the US Trump family running the American White House is raising hell.  The Trump chaos personality trait has fed violence around the world as Palestinians and all parties actually begin to lose hope in a solution to this 7-decade conundrum that only contributes to loss of life and hatred.

In France the number of violent anti-Semitic crimes in the first half of the year is up roughly 70% say France’s officials.

Quiet listening, tolerance and compassion are three words the people of the world need to learn, practice and believe as 2018 comes to a close. More than four dozen armed conflicts say we don’t need another.