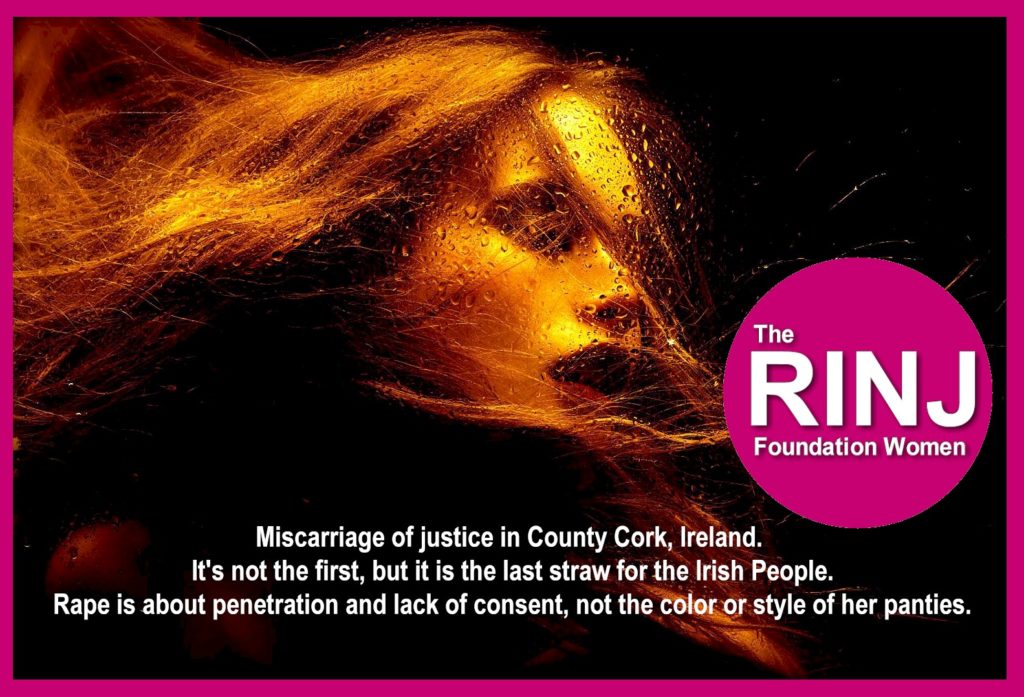 Poster protests the mistrial of an alleged rapist in County Cork, Ireland wherein a pair of panties was used to shame an alleged victim.  Image/Poster courtesy of The RINJ Foundation 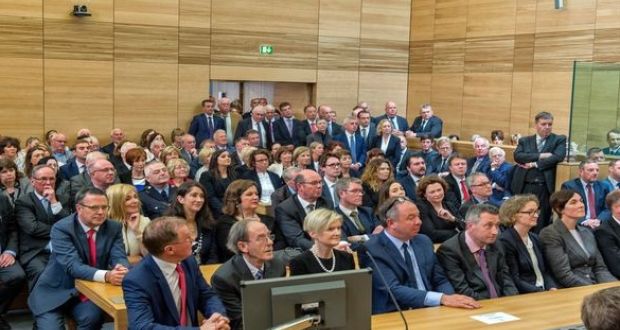 Refurbished Court in Cork Ireland handled 26,000 criminal cases in 2017. Now that the basis of proceedings comes under question by the People of Ireland, that’s a worrisome statistic. Photo Credit: Michael Mac Sweeney/Provision

I believe along with many countrymen that an egregious error has occured to cause a miscarriage of justice in County Cork, Ireland. It’s not the first, but it is the last straw for the Irish People.

Feature article by Micheal John,micheal.john@fpmag.net with files from Melissa Hemingway

Ed. Note on sourcing: In preparing this article we asked for the help of a panel of women comprised of doctors, nurses and legal experts all career-focussed on the crime of rape as working members of The RINJ Foundation. They have experience in literally thousands of cases. In this article FPMag will refer to these sources as “our panel”.

This article seeks and proposes solutions for an alleged miscarriage of justice and refers to a rape case that came before Cork’s Central Criminal Court and concluded with acquittal on 5 November 2018. FPMag will out of respect for  privacy therefore not refer to the complainant and the accused by name as their conduct in court is not the subject.

Thus far the finder of fact decided there was no rape crime in this recent Cork, Ireland rape case that has women waving images of panties on Twitter, Facebook and on the streets of Ireland in protest. The accused person before that Court was acquitted by a jury.  In this article FPMag will therefore not refer to the parties as rapist and survivor regardless of the beliefs or assertions of our panel & writers.

A Cork Rape Trial Failed The People of Ireland

Acquittal is a big failure of the Court if the accused was actually guilty as charged, but the People of Ireland will never know because of a mistrial event.

It may be true that adversarial components of the Trial  leads to theatre before the jury; but committing a de facto ridicule on the complainant is not theatre, it is abuse of process and also a misleading of the jury.

The defence attorney for a 27-year-old man accused of raping a teen girl was Elizabeth O’Connell of Cork, Ireland.

Consistent with her obligation to zealously defend her client, she did some theatre in her ‘summation’ using a store-bought pair of panties.  She either implied or in the alternative the jury inferred, or in another alternative ‘we don’t know what was the effect on the jury of this misleading act’, that these panties were the rape complainant’s undergarment.

The attorney said she wanted to make a point that the complainant’s attire supported a theory that the complainant had already consented and arrived at the scene prepared to have a sexual encounter. This is a disingenuous assertion as it proves neither lack of penetration nor consent, the only two things that matter in a rape case,  it just entertains the the jury with ridicule of the Court as well  as ridicule of the People the Court serves.

Perhaps the stream of ‘panties’ of all sorts to hit the media and the opinion of  thousands of upset Irish People is proof that choice of under pants styling for women is random and meaningless but egregiously misused to deceive the Court in this trial. That’s what the Judge should have said to the jury before declaring a mistrial.

We must make some assumptions and apologise to the Judge if mistaken about the Judge saying nothing, because in this Court, only the accused and the complainant have the right to a transcript on the permission of the Judge.

Our panel argues it was an instant mistrial for misleading the jury with the underwear theatrics. And the panel politely adduces that the Honourable Judge was improperly trained and completely misled because of and by Ireland’s despicable rape culture. The Judge now needs the help of the Director of Prosecutions, which is explained further along.

The Judge Failed to Realize the Frailty of Female Rape Trials

Summation or ‘Final Argument’ should not adduce new evidence arbitrarily.
All evidence brought before the jury should be admitted by the Court. But an enormous number of people and media pundits see this as “evidence”. That being considered it is probably true the jury saw this trick as being evidence as well.

Irish law provides that trials must be independent, fair and effective.

This trial was not. It is a grievous mistrial and concomitantly is a beacon for change.

The Constitution of Ireland provides that crimes and other offences are to be prosecuted in the name of the People.

Ireland’s Prosecution of Offences Act, 1974, established the office of Director of Public Prosecutions as an independent office.

The Director makes decisions independently of all other bodies and institutions, including both the Government and the Garda Síochána, and decisions are taken free from political or other influence. The Director is the person the Honourable Judge needs assistance from. In the alternative, the prosecutor must file an appeal. All three must begin to listen to the People because to do otherwise is to break the law and to completely fail in their respective roles.

To make a long solution short, the Director of Public Prosecutions in response to the People should listen to the People, admonish, retrain or outright dismiss the Judge in the matter; call a mistrial; and set a date for a retrial.

Future Cases Need These Changes or they will always fail

My name is Micheal O’Brien. I am an Irish citizen and as such am one of the People of Ireland.  I say to the Director of Prosecutions that it is my wish that these changes be implemented in the referenced matter for the benefit of the People and the implementation of independence, fairness and effectiveness of the Court.

I ask all other Irish People to make the same request to: