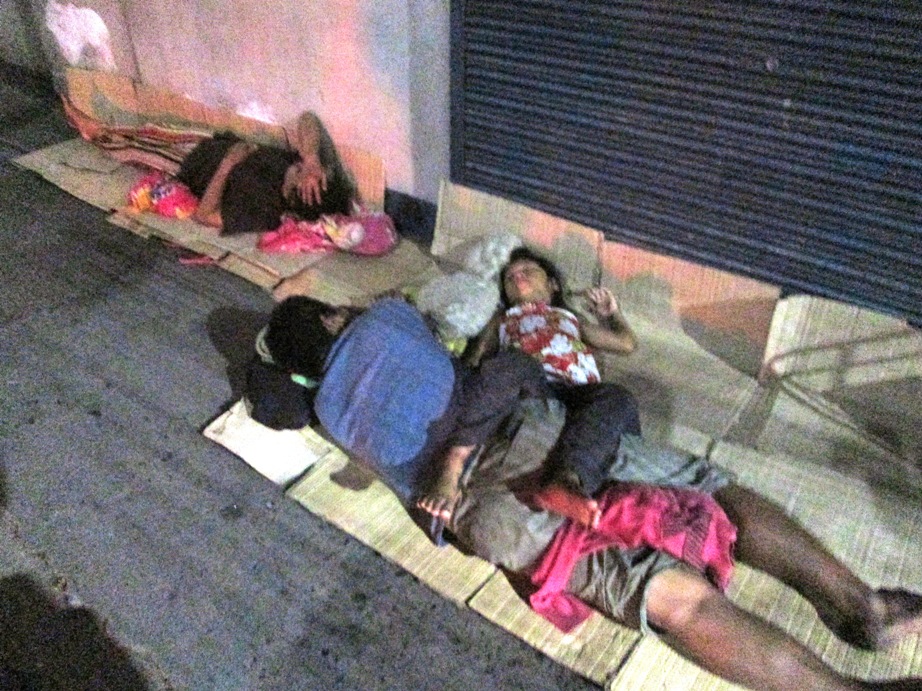 In Manila, wherever you go you will be bothered by child-beggars & broken women looking for a hand out. Hundreds of thousands of women and children live like this. 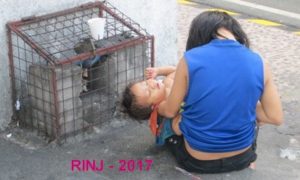 They live among rats and cockroaches that outnumber them in the race for a scrap of food or drink.

Yes, they will cheat you and rob you if panhandling fails. They do contribute to many breaches of the peace. 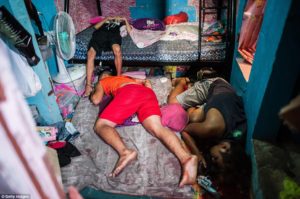 These people were killed by a death-squad.

But their plight is real. If you share some food, they  will gratefully go away and eat. If they are starving and unsuccessful in gaining food they will rob you or commit other crimes. Prostitution at all ages is a common one.

They are hated by the Manila elite who have government jobs, money, and status.

They are despised by the police in their dirty uniforms and filthy attitude. The elite of Manila will pay a handful of cash to be excused for misdemeanour offences but these street people beg for money and have none to give. 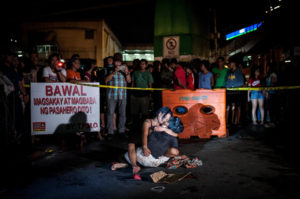 Part of the explanation why Filipinos support the killing of the impoverished nation’s poorer classes is the disparity and hate that exists around the world between the “haves” and the “have nots”. This is extreme in the Philippines. There are many to despise. Most filipinos are poor by world standards. Some 60 million are near starvation. Twenty-nine million are eating less than one meal per day. Sad.

They are slaughtered for little or no reason other than poverty.

The President that boasts he has commit murder since as young as 16 doesn’t have much time for humanitarians or those who advocate for human rights. He has threatened them with death as well. Duterte likes to boast of his prowess as a motorcycle-riding killer. See The Guardian, “Philippines president Rodrigo Duterte says he personally killed criminals“

Philippine President Rodrigo Duterte’s call for police to shoot human rights activists who are “obstructing justice” places all members of the country’s human rights community in grave danger, Human Rights Watch said today. On August 16, 2017, Duterte instructed Philippine National Police personnel to “shoot those who are part of [drug activity]. If they [members of human rights organizations] are obstructing justice, you shoot them.” – Human Rights Watch

The death-squad killer’s impunity is guaranteed by Duterte if they kill drug users. Hence the killer leaves a cardboard sign on the corpse saying “Drogas…”. 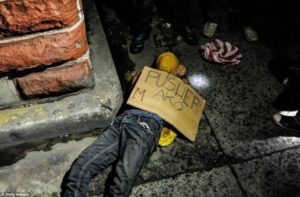 Mostly the dead poor are not drug dealers.

Sadly, if a local street criminal is willing to pay a starving person to do a drug delivery, some will accept the job. Many trapped like this are kids.

But to witness the sadness of the deceased’s family is heart-wrenching. They don’t know why their dear child or adult family member was put on the Barangay list to be killed.
Some of the decedents are 4-year-old children. Some are persons with disabilities. Some are little girls who said they would report the rape they had suffered. Some were girls who had refused sex. Some were raped and murdered. Some were humanitarians critical of the Duterte junta.

The Philippines has not placed much value on human life. Women are sold as part of the GDP

Canadian prime minister Justin Trudeau  arrived to a well-secured JollyBee in the clean Makati section of Manila near the most elite building in the Philippines where the Canadian Embassy is housed on the 7th and 8th floors. 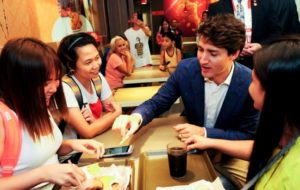 Trudeau delivered a weak  attack Tuesday at a press conference against Philippines Extra Judicial Killings (EJKs) under president Rodrigo Duterte. In reality, Trudeau might have had 4 minutes 30 seconds with Duterte. It is true that everyone expected a comment from Mr. Trudeau about EJKs. Too bad there wasn’t time for more. Trudeau did what he could. We wished it were more. But in effect, he did a good job. Thank you Mr. Prime Minister.

RINJ Women believe Trudeau should have announced sanctions against the Philippines’ elite for riding roughshod on its poorer social classes, murdering as many as 14,000 in the past year. Maybe that would hurt the poor. Maybe we are wrong to make that suggestion. But how can one strongly seek change from evil and protect the safety of women and children in a country ruled by despicable men?

More than 60 million people in the Philippines cannot afford to go to Jollibee and have a 150 PH Peso burger or 29p ice cream. Sad. Horribly sad.  How can this be?

Protest By Canada Against EJKs Was Expected

Justin Trudeau has said that it is to be expected from Canada, because of its past reputation, to voice objection to the 14000 murdered Philippines civilians who lost their lives because the vigilantes launched by Duterte or police claiming that their victims were either drug users or drug peddlers in the impoverished, high unemployment country. 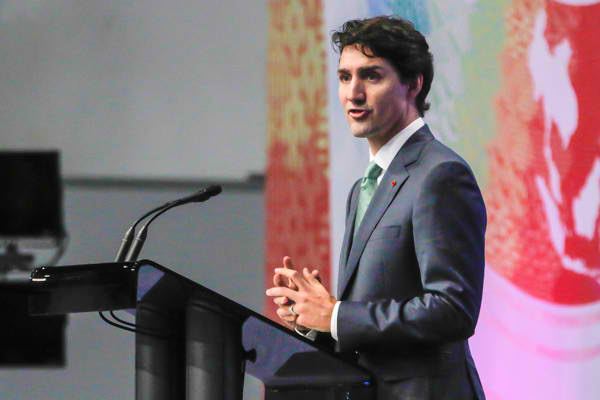 Canadian Prime Minister Justin Trudeau on Tuesday (14/11/2017) announced that Canada will be investing in the improvement of access to reproductive health services to women living in poor and remote regions in the Philippines. The RINJ Foundation has been urging for over a year for this support, which already has the nod from Philippines President Rodrigo Duterte.  Photo: Philstar.com/Efigenio Toledo IV

Trudeau said Duterte was “receptive,” to his criticism of Duterte’s murders but the Philippine President said Wednesday that he considered it “a very serious… personal and official insult.”

What Trudeau may not realize is that he has walked into a career-deadly trap which may have a high price for no gain. Trudeau tip-toed around the issue saying that it was expected of him and that it is Canada that worries about the 14000 dead as a result of Duterte’s vigilantism. Thousands of Duterte troops, trolls and troublemakers are slaughtering Trudeau’s reputation as you read these words.

The ‘joiners’ of Duterte’s Criminal Death Squads are paid.

During his time as mayor of Davao City and since being elected Rodrigo Duterte has ABUSED ‘Vigilantism’ or ‘death-squads’  against a popular enemy of the state (drug users) by murdering his political opponents, critical journalists, critical humanitarians and other opposition, then hanging those crimes on the ‘hit squads’. 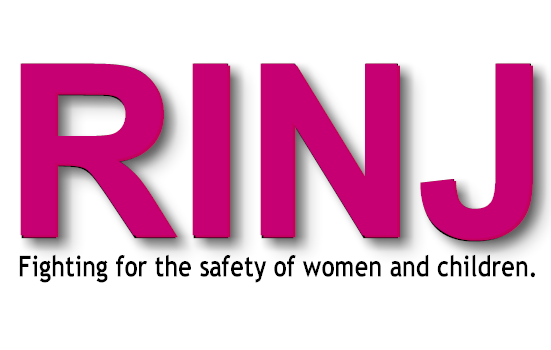 RINJ Humanitarian ‘Informants’ are in the Tens of Thousands of Women and the Phone Keeps Ringing.

The RINJ Foundation has some 100,000 female members in the Philippines. Some are lawyers, politicians, doctors, nurses and other members of the Manila elite. Some are random people in the middle of nowhere who found a sympathetic and yet confidential ear. Some are young adults and some are children. Most are rape survivors. At least half the female population in the Philippines has been sexualy assaulted.

Among the 100,000 members are women whose husbands are cops. Some members have friends or family who are paid to act as internet and social media trolls for the Duterte administration.

Thanks to Duterte’s paid troops, trolls and troublemakers in the  thousands, his administration is ranked as the most popular government in the world in social media polls.

Some communicative RINJ members have husbands who are corrupt Barangay Captains. Some are spouses of individuals who were given a motorcycle, a gun and a partner with whom they have killed people on a list for a fee.  The fee is paid by persons indirectly or directly connected to Duterte who has hidden bank accounts around the world. The killers include a few women. They too are paid directly by friends of Duterte.

The RINJ Foundation on its Facebook page has been for over a year publishing critical reviews of Duterte’s policies, in particular, those policies and actions that have threatened the safety of women and children in the Philippines. RINJ.press has also fairly published articles that applaud those of Duterte’s public policies that are worthy of praise such as support for the reproductive rights of couples in the Philippines.

Paying roughly $100 USD for Facebook ads targeted at the Philippines, RINJ has drawn out and received literally thousands of derogatory posts, nasty misogynist comments and threats of rape, even death threats. In each case The RINJ Foundation workers have researched the poster and those that qualify as part of Duterte’s gangsters have been added to a rapidly growing list of both paid and volunteer troops, trolls and troublemakers. Deleting and banning the poster leaves a record in the Facebook database RINJ can access. 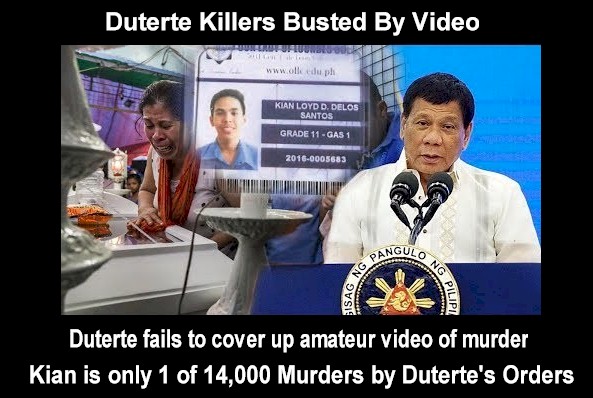 RINJ warns troops not to rape Mindanao women as ordered by Duterte. President Rodrigo Duterte talks to the troops of Joint Task Force Sulu prior to his visit to wounded soldiers at Camp Teodulfo Bautista in Jolo, Sulu on May 27, 2017. He tells troops they can rape up to three women each with impunity.  They did. He later said he meant that as a joke. Rape is no joke. PCOO/Released 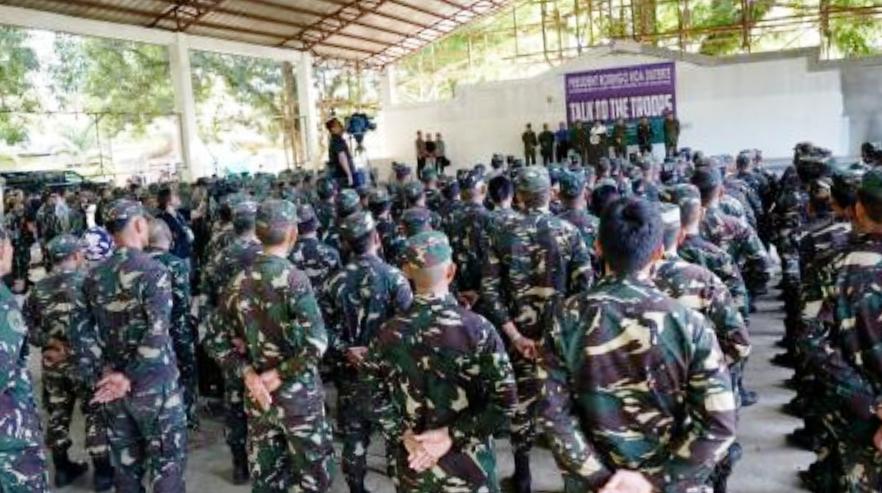 Duterte talks to the troops of Joint Task Force Sulu. He tells troops they can rape up to three women each with impunity.  PCOO/Released

Justice Minister Aguirre: No-Crime Against Humanity to murder Droga People. “They Are Not Humanity”.

The justice minister of the Philippines, Vitaliano Aguirre, a Duterte junta member, has declared that it is “OK” to murder people who use drugs because they are not human and therefore there have been no human rights violations. This despicable announcement comes from the Philippines current Justice Minister.

One doesn’t wonder why a loud-mouthed sexist pig like Trump comes to such events to woo, moo and shmoo with Rodrigo Duterte, but you must be itching to hear an explanation of why Trudeau was here.  He sure made a splash going to Makati JBee. Mr. Trudeau should have asked those young girls at JolliBee how much money they earned.  Service crew receive  $300 Cdn (12,000 peso) per month.  — RINJ SouthEast Asia Director, Sharon Santiago

Watch Aguirre say Droga people are not human and therefore it is OK to kill them in cold blood. (Smoke a joint and you are dead in the Philippines.) 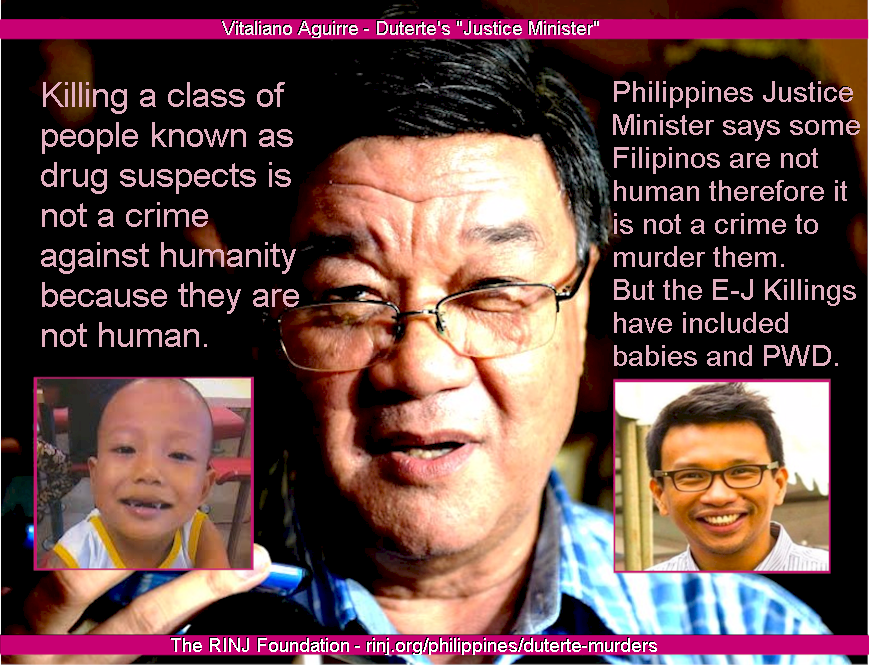 Senator Gregorio Honasan II, for his part, said about the scuffle between Trudeau and Duterte, countries must “give each other some measure of mutual respect.”

“Let’s not be too judgmental [of Duterte’s EJKs] because if we consider killings outside the rule of law…then we don’t have a monopoly of that. Other countries, without being specific, have done worse,” Senator Gregorio Honasan II said.

Do it yourself if you have the gun