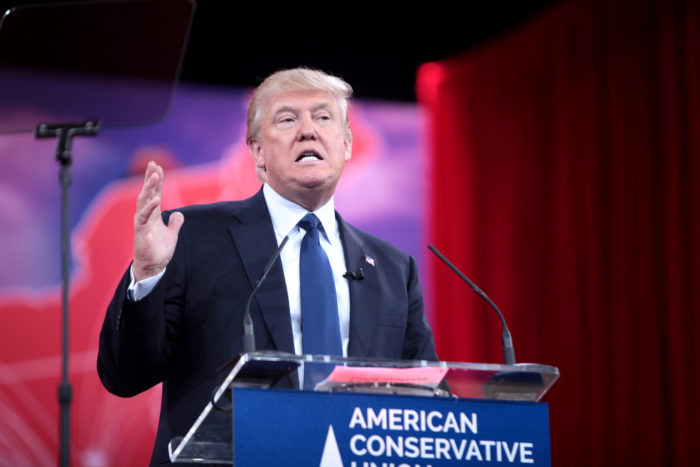 Donald Trump’s misogyny forbids him to know this, but if 100 mothers were in a room and a terrorized baby screamed out for help, 100 driven women would  fly into action and do whatever it would take to rescue the baby.

Ladies, get to your feet. The baby is in terrible trouble. Donald Trump (again). We need to fight The White House for the safety of children and their families.

#WhereAreTheChildren – Jeff Sessions publicly told women who have rescued their girl child from Honduras crime syndicates then trekked 2500 miles to the USA seeking asylum, ‘If you are smuggling a child, we will prosecute you and confiscate your child’.

#WhereAreTheChildren Significance of the 1472 missing children is that this is ORR under HSS where confiscated migrant kids NOW sent. Arrested migrants are unable to get their children back because ORR never did give children back it only handled unaccompanied alien children UAC pic.twitter.com/duDBRmxEDB

Child Confiscated Vanishes Into a World of Abuse says ACLU

The US will confiscate the child and may send her thousands of miles away from the detained mother where the child will be seriously abused says the American Civil Liberties Union (ACLU) in a highly cited report released four days ago.  The mother will probably never be reunited with her child.

The ACLU report points to a dramatic increase in physical and sexual abuse of child migrants by US Border Patrol (under Department of Homeland Security) and documents the following specific abuses of children (this is a small list from 30,000 pages of acquired documents):

Illegal immigration into the USA was driven by single Mexican men for a long time. They severely damaged their country’s reputation forever. Meanwhile stumbling military men in Trump’s Cabinet along with the Trump Fan Club  see every Honduran, Guatemalan, Venezuelan, Syrian, and Argentinian as a Mexican criminal.

They show up at at the San Ysidro border crossing, the busiest port of entry on the U.S. border with Mexico, after traveling for 6 to 8 months. The women and girls in  these caravans face grave danger from rapists and robbers who exploit the vulnerable migrants, attacking the caravans, taking their money and girls.

Soon they will be looked at by Mexico as criminals because as they are turned away at the US border they return to places lie Tijuana and live on the streets. Mexico wants them gone too.

As April ended, migrants from Honduras, having traveled over 2,500 miles across Mexico came to a journey’s end on April 29, 2018, in Tijuana.  They halted their long trip at the Friendship Park at the U.S.-Mexico border.

Their group of 500 had been whittled down to 185 by the hardships of the trip. More than 150 migrants prepared to seek asylum from United States’ immigration officials.

U.S. Attorney General Jeff Sessions pumped up the Trump neo-conservative base by absurdly calling the twelve dozen people “a deliberate attempt to undermine our laws and overwhelm our system“. Sessions must have an abiding hatred for Spanish-speakers.

Let’s be honest. These people are legitimate refugees from something horrible. If 150 Spanish-speaking non-white people (America’s latest ‘N-word’) left Honduras and marched across 2,500 miles, many of that trip being crime-ridden miles of Mexico, to get to the USA, they must be in dire trouble in Honduras and their cases worth listening to.

Mr. Sessions, because you bark an order it does not make your facts correct.
Make no mistake about it,  (cliche intended) 150 ordinary Honduras citizens did not trek 2,500 miles because they wanted to  upset the system of your 325.7 million population country.

Both Kelly and Sessions are made to look like Fools by Trump who on May 26 shoved them under a bus saying the policy they have announced is actually a “Horrible Law that separates children from their parents”.

Trump has admitted that he knows this is a wrongful act done for improper purpose.

Put pressure on the Democrats to end the horrible law that separates children from there parents once they cross the Border into the U.S. Catch and Release, Lottery and Chain must also go with it and we MUST continue building the WALL! DEMOCRATS ARE PROTECTING MS-13 THUGS. Donald Trump, 9:59 PM – May 26, 2018

It is no less true that countless families have been separated from their children and are unable to locate their kids even though their matter before the courts is resolved.

John Kelly, now the White House chief of staff  told National Public Radio that “It’s not ‘cruel’ to separate families at the border — children will be ‘put into foster care or whatever’.

In March of  last year, John Kelly told CNN that the administration was considering taking children from their parents if they crossed the border illegally. At the time, Kelly was secretary for the Department of Homeland Security. 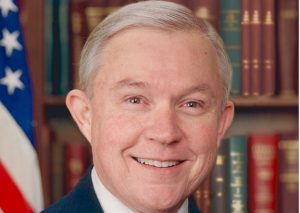 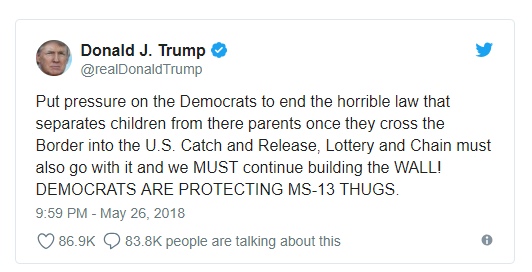 “I think it’s important to clarify” that there’s nothing illegal about coming to our border and asking for asylum. These families are not necessarily trying to sneak in. They are coming to the border, they are presenting themselves to border officials, and they are asking for help. Nothing in our laws or international laws suggest that the appropriate next step is to take those children from their parents in the hopes of deterring other families from exercising their right to seek protection at another nation’s border.  Jennifer Nagda of the Young Center for Immigrant Children’s Rights.

Dep-Chief of Operations for CBP testified from May 6 to May 19, 2018, 638 parents traveling with 658 minor children were prosecuted under “zero tolerance”. Children sent to "Foster Homes" criminalizing & forcibly separating families who are seek protection #WhereAreTheChildren pic.twitter.com/1Nd3TFnwU0

Much has changed since Trump went to school half a century ago. Failing undeveloped nations, failing democracies and a tendency for extremists to seize the vulnerability of poverty has led to global instability and strong dissent between the ‘have-nots’ and the ‘haves’.

The changes have driven over 60 million displaced people into camps and caused 250 million to migrate to another country.

Over the next ten years it is estimated that one third of the world’s population will be displaced by war, crime and natural disasters.

The rich and the poor have begun to hate each other.  The odds are that Trump and his crew probably hate you.  Sorry.

Nevertheless the world’s governments, the rich and the powerful,  must cope with some 250 million people who leave their countries to live in another because their home is hurting; raping; killing or denying  them basic human rights.

Human Rights Complaint Against US Separation of Children from Families

The RINJ Foundation Women filed a Human Rights complaint against the United States because it has open files on client cases where women and children have made the long journey from Honduras and Guatemala through Mexico to America  and have had their children confiscated. They want their children back. Many Civil Society members believe they should also be compensated for the persecution they received from America while explaining the persecution they endured in their home country.

Have you ever met a US border security agent working for Homeland Security?  They seem to believe that every person they meet is a criminal. They may not be the brightest light in the forest but mention Donald Trump and describe crying migrant children and they will jump to a combat position and kill a Guatemalan student.

Women who have escaped with their children from forced sexual slavery in Honduras are not criminals. They are heroes who have stood up to global crime and lost their home because of that abidance of the rule of law. They stood up to men whose badge of honour and a sizable portion of their income comes from the number of girls they have forced into sexual slavery.

Many of these genuine refugees have now had their children seized away from them in the United States and nobody knows where the children have been relocated.

Hence, Donald Trump whose limited education (apparently skipping English grammar) (and geography) (and mathematics) goes back to a time when scientists and car makers thought electricity flowed from positive to negative polarity and some people still believed the Earth was flat, sees the world in the context of a paradigm that is gone forever.

This Policy of Taking Children away From Parents is a Trump Policy and Trump’s Cabinet Secretaries Have Said as much.

Donald Trump is an old man who hasn’t a clue what is going on in the world because he cannot see past himself. There is no point whatsoever in trying to find empathy for babies and children in Donald Trump.

Estelle Freedman, the Robinson Professor in U.S. History at Stanford University, said of the book The Dangerous Case of Donald Trump that US President Donald Trump’s mental health poses to the “nation and individual well being”.

The Dangerous Case of Donald Trump  is a 2017 book, edited by Dr. Bandy X. Lee, a forensic psychiatrist, containing essays from 27 psychologists, psychiatrists, and mental health professionals on the “clear and present danger”.

This insightful collection is grounded in historical consciousness of the ways professionals have responded to fascist leaders and unstable politicians in the past. It is a valuable primary source documenting the critical turning point when American psychiatry reassessed the ethics of restraining commentary on the mental health of public officials in light of the “duty to warn” of imminent danger. Medical and legal experts thoughtfully assess diagnoses of Trump’s behavior and astutely explore how to scrutinize political candidates, address client fears, and assess the ‘Trump Effect’ on our social fabric.

Donald Trump doesn’t care and is prepared to take unlawful steps to appease the extremists who elected him. Those extremists are xenophobic cultists who don’t want to allow blacks nor Hispanics living on their street–many say ‘not in my country‘.

People who are persecuted in their own undeveloped country in the Americas will come to the US and try to make a case for asylum from persecution. They are in the wrong paradigm too. They think of a once kind and humanitarian America.

Some undeveloped countries are in a state of anarchy. In the case of  the Honduras, street gangs have large territories and have become the de facto government. America’s asylum laws need to be modified to the current time . The US really knows how this works after being in warlord-controlled regions of Afghanistan and Somalia. (Somebody tell Trump where those countries are located.) Remember how warlords ran the show? Some countries in Central and South America are thus afflicted today and getting worse.)

The fight for the safety of women and children is becoming harder by the day. It comes up against macho-fascism and misogyny that are taking millions of lives. 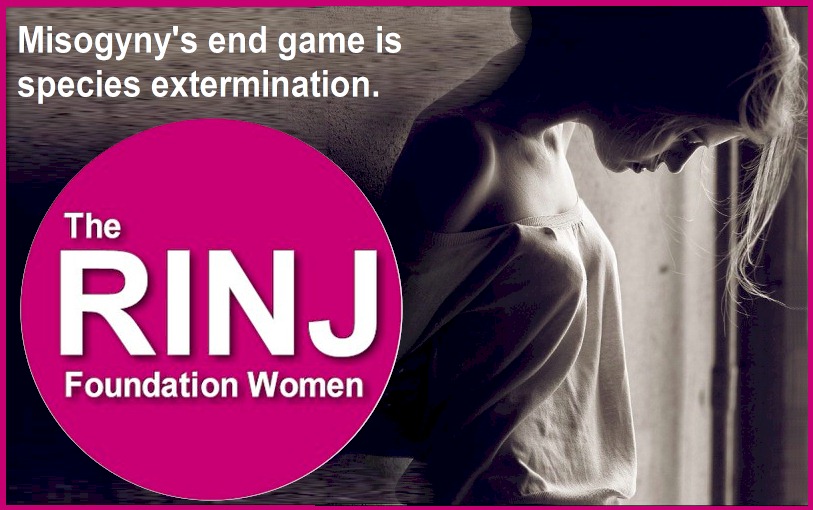