The UN Human Rights Commission says the “disproportionate and indiscriminate use of force by the Israeli occupying forces against Palestinian civilians” requires a full investigation.

Friday May 18: Emergency Session of UNHRC will send war crimes probe to Gaza

At a special session of the United Nations Human Rights Council convened on Friday in response to the May 2018 Gaza Massacre the UN High Commissioner for Human Rights, Zeid Ra’ad Al Hussein,  spoke of Palestinians living in Gaza as “caged in a toxic slum from birth to death; deprived of dignity; dehumanized by the Israeli authorities to such a point it appears officials do not even consider that these men and women have a right, as well as every reason, to protest.”

He said Israeli soldiers killed 106 Palestinians, including 15 children, since March 30. More than 12,000 were injured, at least 3,500 by live ammunition. Israel was an occupying power under international law, obliged to protect the people of Gaza and ensure their welfare, he said.

The United States which has supported the Israeli massacre of Palestinians on May 14 pommeled representatives to the UNHRC until 14 countries abstained including Germany, Japan, South Korea and the United Kingdom.  Voting in favor of the decision were 29 states with two against. Australia and the US were the two countries to vote against the decision.

Canada, which has no vote, spoke against the decision and shamed itself saying that the UN Human Rights Council was too biased against the human rights offender, Israel. Rosemary McCarney, Canada’s permanent representative to the United Nations in Geneva used the same logic (“[Canada can’t support the resolution because] “the resolution singles out Israel”) that has kept this conflict running for 70 years. More than that, the Canadian government betrayed Canadians who were shot during the May 2018 Gaza Massacre.

Israeli ambassador to the UN in Geneva, Aviva Raz Shechter, criticized the special session Friday, saying it was “politically motivated and won’t improve the situation on the ground by even one iota.”

She is probably right about both allegations. Her country’s government can make sure of that. But the war crimes investigation which may take as long as a year, may do more than just rattle the ambassador. The one thing she missed which the Human Rights Commissioner has been slamming with a figurative hammer, is the human rights of the two million people in Gaza. Hamas is equally guilty.

The foolish Canadian and the anger-blinded Israeli both completely miss the reality that the HUMAN RIGHTS Commissioner is a quintessential defender of human rights and is doing his job zealously defending the rights of all people and thereby advancing the cause of human development with sustainable action to protect human rights. Yes there is a bias. (The bias is in favour of human rights. What’s yours?)

“The unfortunate outcome of Monday’s riots can only be attributed to Hamas’s cynical exploitation of its own population, in a violent campaign against Israel,” she said.

Aviva Raz Shechter brings a moot point to the discussion demonstrating more of the volatility of both Israeli and Hamas leadership bickering across a fence without a single care for the abused populations for which they are both responsible. It is no less true that Hamas’ conduct is exploitive of the people it should be helping instead of pushing vulnerable, unarmed civilians into harm’s way.

We and civil society are concerned about the people, not the politicians.

Nevertheless, as discussed below, The RINJ Foundation in a careful study of Gaza and other Palestine territories concluded in 2017 that Hamas and the Palestine Authority significantly exploit Palestine women and children. It is no less true the Israeli side is not justified to maim or kill these vulnerable, exploited people.

The unmitigated drivel of Canada, Israel, America and Australia in their de facto support of the Israeli May 2018 Gaza Massacre is the same disingenuous weazling, waffling,  piffel that has kept this ugly conflict alive for 70 years.

A peaceful rally came hours ahead of an extraordinary summit meeting of the Organisation of Islamic Cooperation (OIC) also called by Erdogan to denounce Israel’s actions and the moving of the US embassy for Israel from Tel Aviv to Jerusalem.

The OIC’s urgings are quite profound but sensible and should have been heard from the outset but the dysfunctional UN Security Council  (UNSC) (dysfunctional because of its veto-powered five permanent members) failed the General Assembly of members miserably.

The OIC called for upholding the UNSC’s legal obligations to defend the international law and order as they relate to Palestine and to put an end to these atrocities, and to provide international protection for the Palestinian people. Crowds attend a peaceful protest rally in Istanbul on May 18, 2018. PHOTO: AFP

The United Nations General Assembly’s Committee on the Exercise of the Inalienable Rights of the Palestinian People condemns the excessive and disproportionate use of force by Israeli security forces against peaceful Palestinian demonstrators at the Gaza fence with Israel, in the context of the “Great March of Return”, which today alone resulted in the killing of 55 Palestinians and 2,771 injured.  Since 30 March, the start of the six‑week campaign by Palestinians calling for their right of return in accordance with General Assembly resolution 194 (III) and the right to exercise their inalienable rights of self‑determination and independence, Israeli security forces have killed 110 and injured 12,271 Palestinians. The RINJ Foundation Women, a Civil Society women’s group based in Toronto, Ontario Canada has released several criticisms of Israel related to what the group calls the wrongful imprisonment of the sixteen-year-old Palestinian girl Ahed Tamimi.

The group’s findings clearly indicate that the Palestine and Hamas leaderships are criminally exploiting vulnerable women and children to the point of their morbid endangerment. Repeatedly the risk is realized with casualties imposed on the population. Thus women and children in Palestine territories are unsafe.

The RINJ group also claims it has learned about a silent edict which has been issued to Israeli Occupation Forces in the Israeli occupied Palestinian settlements of the West Bank to conduct reprisals on women and children for the ongoing demonstrations against Donald Trump’s announcement that the US is declaring Jerusalem as the Capital of Israel and moving its embassy there. In a report published by The RINJ Foundation from the Middle East the women’s group says “this child has not committed a crime. She has acted in self defence by slapping a trespassing soldier at her home, in his face, pursuant to numerous and continuing attacks and harassment on herself and her family including younger siblings. She has the right to resist the occupation soldiers invading her home, especially when they are there for wrongful purpose. Read the Geneva Convention amendments. She has the right to do that.”

Long ago, it was settled that resistance and even armed struggle against a colonial occupation force is not just recognised under international law but specifically endorsed.

Friends of Israel must warn the State that it has gone too far in targeting women and children for abuse. Instructing soldiers to shoot their live ammunition at the legs of demonstrators, killing thirty women and over fifteen children since March 30 is a crime for which Israeli’s who are responsible must pay in prison time.

In the West, journalists and politicians have dismissed Palestinian claims of human rights abuses in the Israeli Occupied Territories, for decades. Today these people have a UN Human Rights Commissioner who is fighting for their safety.

Feminine Perspective last week blamed the US and Israel then pulled back and urged for an independent investigation into the May 2018 Gaza Massacre. A small few others did that as well to the chagrin of the United States, many of America’s trading partners, and of course Israel.

Evaluating decades of suffering by Palestine women and children, The RINJ Foundation advanced as a civil society women’s group that Women and Children are not safe in Gaza. There is an enormous amount of concurrence to that finding. 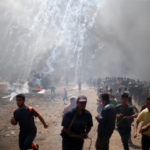 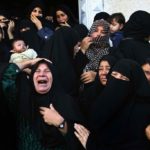 2. America, from the President down hates Muslims and manipulates Israeli government policy in that channel.

3. The Palestinians have a one track methodology these past seventy years: bloody revolt.

Hence, those persons found to be responsible with probable cause, on any and all sides, for the May 2018 Gaza Massacre should be indicted.

In the Event of May 14, over 60 persons Died & 2,700 were Injured says the Gaza Health Department

You might think that calling this crisis a  May 2018 Gaza Massacre assumes a conclusion. It doesn’t. We were there. This was a massacre for which my God damned its perpetrators with a deep-looking UN investigation. Prayers from around the world must have been, “make this stop”.

Since the Palestinian demonstrations began March 30, more than 110 Palestinians were killed and more than 2,500 wounded by live military gun fire, according to the Gaza Health Ministry. Palestinian officials claim most of the casualties have been unarmed protesters. One Israeli soldier has been wounded.

On May 14, Palestine Authorities estimate that some 40,000 Palestinians took part in the demonstrations because this was the day that Donald Trump invoked the 1995 congressional Jerusalem Act and in a technicality (The actual ’embassy’ remains in Tel Aviv and will take years to move.)  transferred the US Embassy to Jerusalem. Then began the May 2018 Gaza Massacre.

The Israeli military used live NATO standard ammunition and shot the legs of thousands of Palestinians, under orders. IDF soldiers who will not be named told me exactly that. They were under orders.

Do you know Gaza? It’s a human dump of the unwanted. The Gaza Strip is  a 365 square kilometre concentration camp surrounded by razor wire housing 2 million people. It is a nightmare for human rights workers and the most crowded and uninhabitable place next to America’s Guantanamo Bay.

Look at Recent developments in Gaza

Special Session of the Human Rights Council on the deteriorating human rights situation in the Occupied Palestinian Territory, including East Jerusalem

Who will fix this “International Law”mess, one of many around the world? UN Secretary-General António Guterres in His own words: