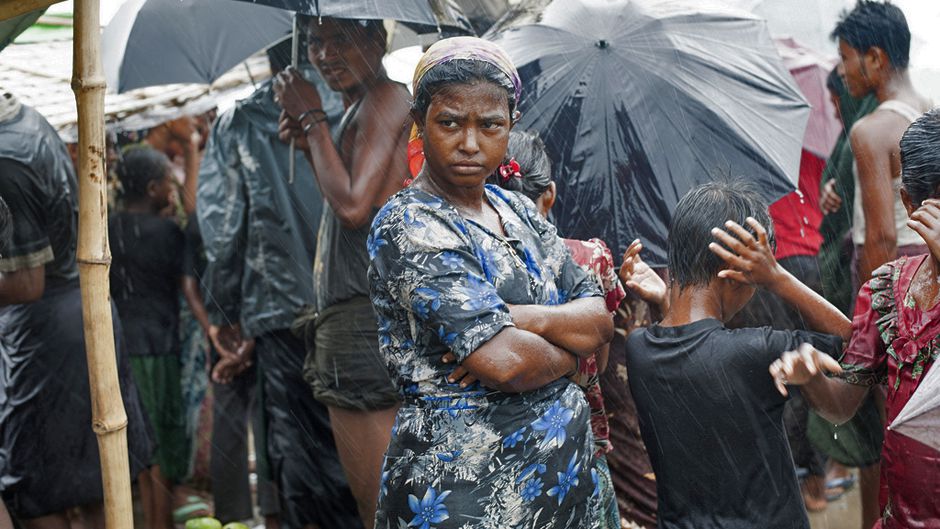 Rohingya Rape Pregnancies coming to full term in camps as more rain falls. Monsoon season has begun. The number of raped Rohingya girls and women may be as many as 100,000 across three countries where Rohingya are displaced. Now delivering 60 babies per day and that could jump to 800 average. Photo: IRIN

If the UN Security Council (UNSC) does not call to account the perpetrators of rape crime in Myanmar under UN Resolution 1820 (etceteras), the Security Council should fold its tents for if the rape and forced pregnancy of tens of thousands of Rohingya matters nought, so goes the UNSC.

The Bangladesh Health Ministry reports that 81,000 pregnant girls and women are about to give birth in Bangladesh refugee camps for displaced Rohingyas from Myanmar.

According to the women’s accounts, they were raped in Myanmar by soldiers who were killing their people and burning their villages in an ethnic cleansing rampage that has driven an estimated 700,000 people from Rakhine state, Myanmar.

In a month or so, the birth rate as a result of rape will rise to about 800 per day. Making certain that the offspring of this minority is no longer ethnically Rohingya the Burmese are systematically conducting a long-term ethnic cleansing by instructing soldiers to rape the women.

“Despite our border guards’ sincere effort to prevent the influx, thousands of distressed Myanmar citizens including women, children and elderly people continue to cross the border,” the Bangladeshi foreign ministry said in 2016 following an outbreak of violence that the state of Myanmar blames on Muslims and the Rohingya blame on the government of Myanmar (A.k.a. Burma. Note: The ruling military junta in Myanmar changed its name from Burma to Myanmar in 1989, a year after thousands were killed in the suppression of a popular uprising. Rangoon became Yangon.)

This crisis is worsening. 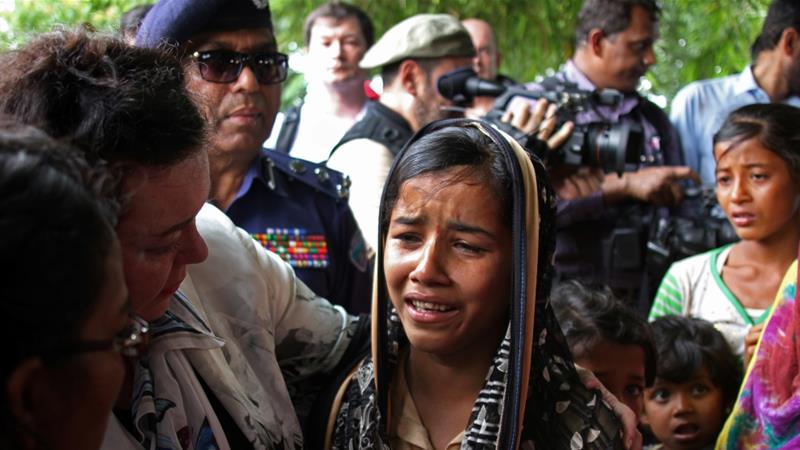 Both sides have committed alleged atrocities many of which are difficult to verify.

Mass rape and forced pregnancies are easy to prove. Come deliver some babies. Listen to the mothers’ stories. DNA testing is instructive. This is mass rape of a class of people under direct orders of a government seeking genocide of Rohingyas. There are sixty or more babies per day in each refugee camp. Soon that number will increase.

Something needs to be done to sanction Myanmar and the Security Council needs to have its male size 8 feet held to the fire in order to get that done.

The Rome Statute grants certain powers to the UNSC. Article 13 allows the Security Council to refer to the IC Court situations that would not otherwise fall under the Court’s jurisdiction. Myanmar is such a case. Myanmar is not a member of the International Criminal Court.

In August 2017, it is alleged that Arakan Rohingya Salvation Army (ARSA) terrorists carried out an attack against Burma Hindu.  Myanmar retaliated against the ordinary Rohingya people in what has been described as a vicious and disproportionate response. The Office of the United Nations High Commissioner for Human Rights labelled it a textbook case of ethnic cleansing.

On 11 September 2017 the United Nations Human Rights Commissioner hit out at the treatment of Rohingya in Myanmar as security forces and local militia reportedly burned villages and shot civilians.

“The situation seems a textbook example of ethnic cleansing,” Zeid Ra‘ad al-Hussein told the UN Human Rights Council in Geneva, noting that the current situation cannot yet be fully assessed since Myanmar has refused access to human rights investigators.

Since that time, evidence of Rohingya terrorist acts has come to the surface and was investigated by Amnesty International.

In December of 2017, Myanmar’s armed forces flew reporters to a location in the north of Rakhine where they showed the bodies of Hindus in mass graves.  There is a high probability the Arakan Rohingya Salvation Army (ARSA) had carried out a massacre in a village called Ah Nauk Kha Maung Sei. There may be other instances of skirmishes and massacres done by ARSA.

Killing  non-combatant women and children in these villages is a war crime (MSF estimates at least 6,700 Rohingya were killed during the first month of the conflict with the army in Rakhine). Both sides are guilty of war crimes if the ARSA is to be considered as integral to the Rohingya minority in Myanmar.

Raping thousands of Rohingya girls and forcefully impregnating them is both a heinous war crime committed by Myanmar and a crime against all of humanity in the context of the Rome Statute, the Geneva Convention and several UN Resolutions. We cite the Rome Statute and the UN Resolution 1820 of 2008.

4. Notes that rape and other forms of sexual violence can constitute a war crime, a crime against humanity, or a constitutive act with respect to genocide, stresses the need for the exclusion of sexual violence crimes from amnesty provisions in the context of conflict resolution processes, and calls upon Member States to comply with their obligations for prosecuting persons responsible for such acts, to ensure that all victims of sexual violence, particularly women and girls, have equal protection under the law and equal access to justice, and stresses the importance of ending impunity for such acts as part of a comprehensive approach to seeking sustainable peace, justice, truth, and national reconciliation;

stresses the importance of women’s equal and full participation as active agents in the prevention and resolution of conflicts, peace-building and peacekeeping.It calls on member states to ensure women’s equal participation and full involvement in all efforts for the maintenance and promotion of peace and security, and urges all actors to increase the participation of women and incorporate gender perspective in all areas of peace building.

As a follow up to 1325, the Security Council adopted Resolution 1889

which calls for further strengthening of women’s participation in peace processes and the development of indicators to measure progress on Resolution 1325.

Recognising the impact that sexual violence in conflict has on the maintenance of peace and security, the Security Council adopted Resolution 1820

which explicitly links sexual violence as a tactic of war with women peace and security issues. Security Council Resolution1820 reinforces Resolution 1325 and highlights that sexual violence in conflict constitutes a war crime and demands parties to armed conflict to immediately take appropriate measures to protect civilians from sexual violence, including training troops and enforcing disciplinary measures.

, as a follow up to Resolution 1820, mandates that peacekeeping missions protect women and children from sexual violence during armed conflict, and requests that the Secretary-General appoint a special representative on sexual violence during armed conflict (Office of the Special Representative of the Secretary-General on Sexual Violence in Conflict). Most recently Resolution 1960 was adopted which builds on and deepens the women, peace and security agenda on sexual violence.