RINJ Women fighting for the safety of women and children…

The RINJ Foundation Women are fighting for the safety of women and children.

Sunday, March 11, RINJ Women talked together from all over the world. They talked about past challenges, about new opportunities. Their meeting was done by digital communications and happened spontaneously. They had been trying to figure out which city to meet in and that discussion rolled into a summit of its own. I took notes and listened.

The risks to women and children are:

I listened to some extraordinary women humanitarians whose accomplishments make this scribe feel humble. Skipping the minutia, the resolutions of this group begin from a confirmation that the group’s raison d’etre is reaffirmed.

“We know what we are doing and we are getting it done“, says Jess who has been in the Middle East working in camps and clinics in Syria, Turkey and Iraq since 2012.

“RINJ Women must radiate these values in our collective tasks. Women are half the world’s community members. Our duty to step up to build better communities is compelling. RINJ Women as a Civil Society Organization seek sustainable human development from a position of perceived feminine helplessness rudely imposed on women by a patriarch to which women traditionally acquiesced.So yes, we rise up above the misconception of weakness to love & support women and children, especially the most vulnerable. While we strive for all our rights we encourage others to join us.

“Convincing patriarchs that women deserve equality in economics, opportunity, education, power-sharing and society has been a violent war. Violent men feel threatened by women who riseup. Evil men perceive women as the chattel property of other men and hurt us to hurt their enemies. Evil men hijack religion and our other institutions to oppress ordinary women. Immoral lust for power & control leads men to rape, to other violence. For their persecution; for their wrongful imprisonment of females; for their rape & molestation of women & children; evil men belong in prison. RINJ is mindful of that aim. Join us in defiance of extremist men & the malicious & hateful ideologies that fuel their violence around the globe. Join us to improve ourselves and become rich in gender parity, tolerance, kindness, caring, and sharing. Let love win over hate.” –RINJ 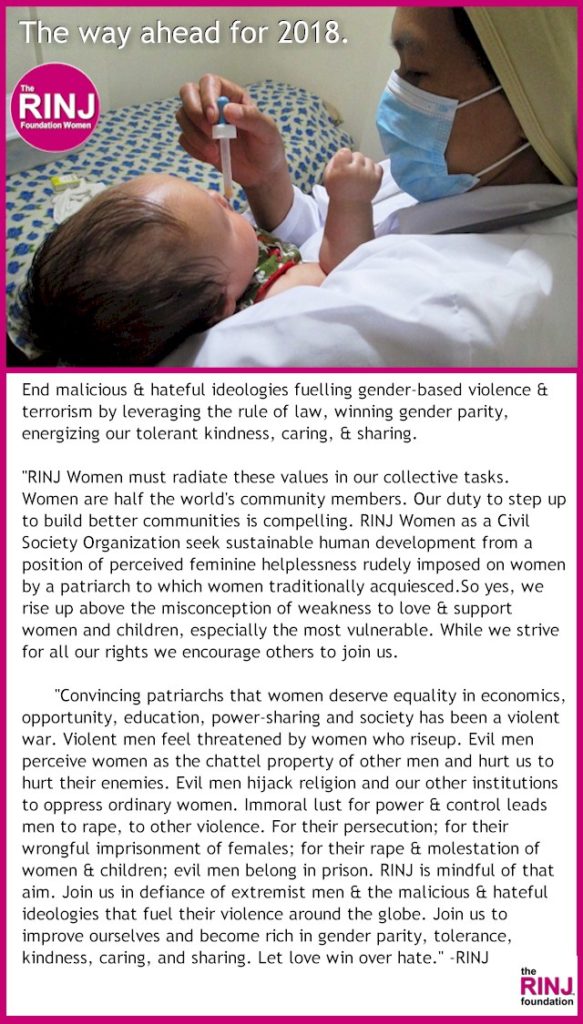