With Misogynist-in-Chief Donald Trump as US President this should not surprise anyone. What arrogant, American, misogynistic claptrap. Up your “W”.
McDonald’s is the company that destroys the small enterprising women-owned business and then employs her for 79 cents an hour in Solano, Philippines–not a Happy Women’s Day.

Feminism is a doctrine that advocates equal rights for men and women.  Are you a feminist or misogynist? 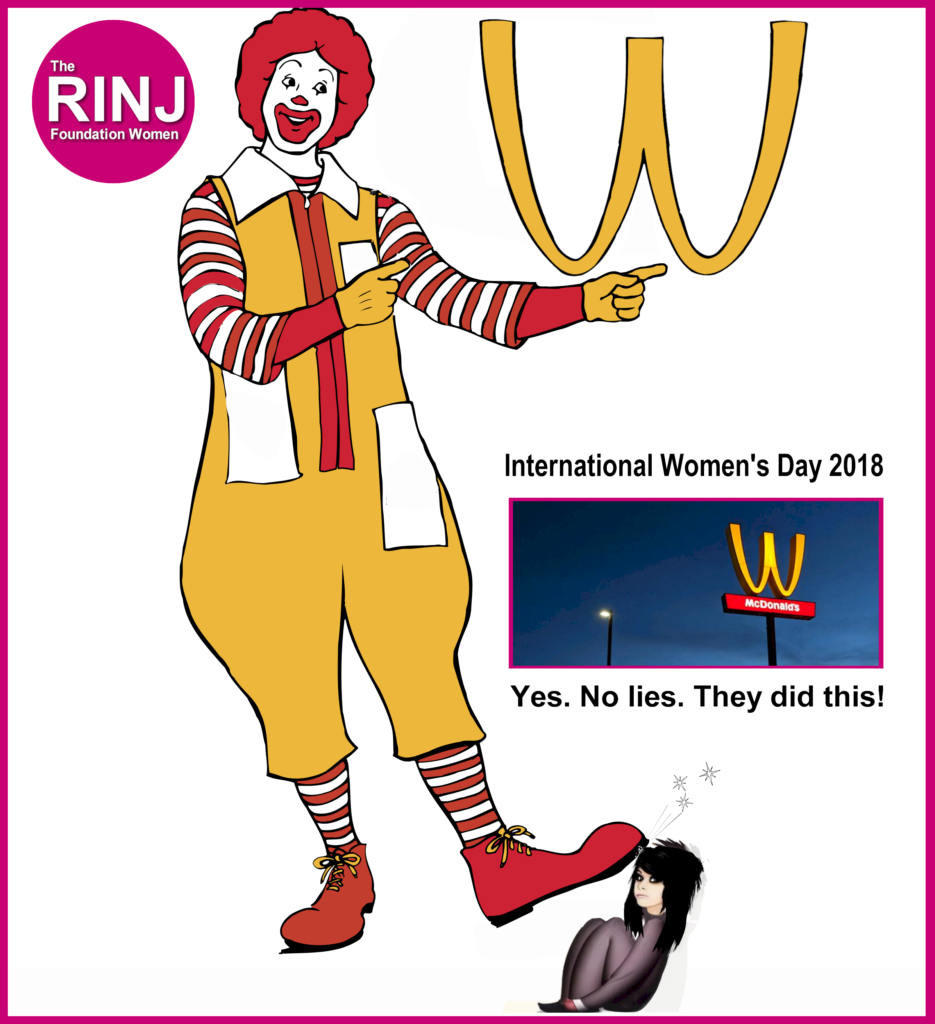 “In celebration of women everywhere, and for the first time in our brand history, we flipped our iconic arches for International Women’s Day in honor of the extraordinary accomplishments of women everywhere and especially in our restaurants,” McDonald’s global chief diversity officer, Wendy Lewis, said in a statement to the website. … In addition, 100 restaurants will have special “packaging, crew shirts and hats and bag stuffers [point of sale material].” – The McDonald’s Social Media Campaign

Oh, America. McDonald’s is less and less welcome for those of us women who have daughters.

The global gender gap has been widening, rape culture growing, and misogyny reining supreme, since the self-confessed  pussy-grabber-in-chief  took over the White House with the help of Vladimir Putin and a cadre of the best Russian social media propagandists in the world.

Celebrating “Women” is something McDonald’s should do because millions of Moms unwittingly drag their kids to the home of the chemically-preserved trans-fat carb to feed their kids quickly for a barely affordable price.

But a realistic effort on the part of McDonald’s would have been offering healthy children’s food for International Women’s Day–food without polydimethylsiloxane, sodium acid pyrophosphate, tertiary butylhydroquinone (TBHQ), and azodicarbonamide.

Serving healthy food for a day a year would be admitting women are right about your chem-food and so too is the World Health Organization  which says while Azodicarbonamide is of low acute toxicity it may cause asthma and skin sensitization. The Centers for Science in the Public Interest (CSPI)  says that TBHQ increased the incidence of tumors in rats. They also mention studies that have demonstrated TBHQ to cause liver enlargement, neurotoxic effects, convulsions, and paralysis in laboratory animals. The National Toxicology Program and the International Agency for Research on Cancer consider acrylamide to be a “probable human carcinogen,” based on studies in laboratory animals given acrylamide in drinking water. And so on.

What about a letter of apology to the thousands of girls who have been underpaid, sexually harassed and assaulted as employees of McDonald’s stores? That would have been a great step forward for international women’s day.

But most of the sexual harassment complaints we hear about through our HotLine where caller information is 100% confidential; and the numerous complainants we have heard from, female employees who brought their issues to the American Equal Employment Opportunity Commission (EEOC), say that their complaints of sexual harassment and sexual violence are not heard by McDonald’s upper management. 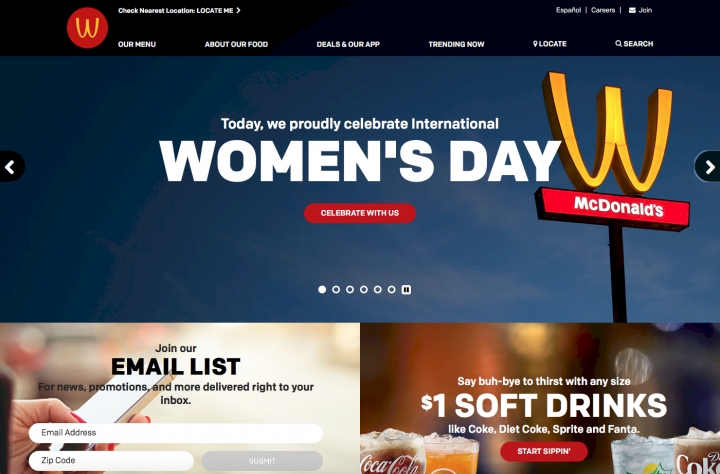 McDonald’s doesn’t understand gender equality or anything about International Women’s Day. Instead of flipping a “W” at women, try upping your gender balance from 21.42% women in upper management to 50%. Maybe then McDonald’s would not be the bastion of female-child-exploitation it has become. In Vietnam, Malaysia and in Iraq, fathers of the girls harassed in McDonald’s few stores there would raise hell if they only knew the truth of what is happening. Fixing these kinds of problems would be a better celebration for women on International Women’s Day.

Next year, think of something constructive, not insulting or ironically tactless.

One thing we know for sure, the girls working at McDonald’s do not talk to their parents about what is happening to them. Ninety-four percent tell no in-person contact. But many contact our HotLine.

And, Steve Easterbrook, start paying the girls and women you are exploiting, a decent wage. For example, 79 cents per hour in the Philippines is exploitive and shameful. How dare you exploit these intelligent, creative, caring, pretty people you line your counters with.

Sadly the latest World Economic Forum-Gender Gap Report, which measures gender equality on a global scale, 2017 was the first time in more than 10 years that the gender gap began to widen again.  The current gap in income between men and women is so wide that it would take 217 years to close it, according to the report. Inequality grew across all categories, but the gap grew particularly in the economic equality category. Blame in part, McDonald’s, for exploiting so many thousands of girls and women out of a respectable wage.

Something stinks at McDonalds and it is not the Fish.
The fish is too full of chemicals to rot.

OK, so a bunch of men running McDonald’s don’t get it. No worries, we must admit that we know that there is the problem in the first place. McDonald’s restaurants are beacons for male gropers. It’s female employees suffer some of the worst sexual harassment.

Thanks for the “W”  but it only works in English, it’s an insult for anyone with an IQ over 80,  and yes, it’s better than “Jane Daniels” and a pair of hooters.  I would rather read an essay by Lucy Brady explaining how she plans to hire more women managers and increase the safety of women in the female dominated food and hospitality sector. These girls and women may comprise the majority of the company’s employees but they are not rising to the top in the same percentile. It would be nice to see that addressed for International Women’s day. McDonald’s is not fooling the RINJ Foundation Women.

Something stinks at McDonald’s. The chain of fast food stores is not only a misogynistic operation but it is also a creepy place for girls because of a reputation for sexual harassment, groping, condescending male chauvinism and rape.

McDonald’s ignores serious instances of sexual harassment says the Huffington Post in an investigative report it published in October of 2016.

With my own eyes I have witnessed this conduct at McDonald’s in other countries. In one case the male manager was poking at a female cashier and swatting her buttocks repeatedly. Twice I have made an issue by asking to see the Manager which resulted in my being listened to by stoned-faced women who said nothing but their eyes said it all. In the aforementioned case I was pestered by a security guard until I left.

In the South East of Asia where there are few adherents to the rule of law, sexual harassment and sexual violence at the McDonald’s stores is running amok and the men doing these crimes do so with impunity. I would not have expected, however, that further south, teens would be sexually harassed at McDonald’s job interviews in Australia.

Women at the Top Doesn’t mean Inverting the “M”.

The whole idea behind closing the gender gap globally is to include the other half of the world’s population you are missing. Once the gender gap is closed there are a few billion more customers with discretionary incomes and a whole array of new consumer needs. Women’s ideas for business are very good.

One example I like to use is Mary Barra, the top honcho at General motors.  Nicholas and Rachel are her children and once upon a time they were little babies driving down a busy road. As a Mom you look around and FEEL the dangers to children. You feel them.

Mary Barra has a passion like you will never know unless you have had two babies like Nicholas and Rachel and I mean that, as a dad or a mom. Yes. Feminist Dad’s get it. (Feminism is a doctrine that advocates equal rights for men and women. Are you a feminist or not?)

Mary wants a world with zero automobile crashes. (I, Melissa, want passionately for that.) Mary wants to save lives through safer personal transportation; she seeks cleaner air through zero automotive emissions, so future generations can inherit a healthier planet; and she wants zero congestion, so you get back a precious commodity — time.

With these ideals, Nicholas’ and Rachel’s Mom has led the General Motors brands through record performances. CEO Mary Barra’s compensation for 2015 rose 72% from the prior year to $28 million as she guided the company to record profits, the company has said. Her compensation, including pension and perks, was $28.6 million, the automaker said as of  Apr 22, 2016.
If for example you are a board member of a company making diapers and you wanted a new CEO, choose one that has changed a few diapers. I know you think that is a women’s job. I mean naturally having breasts and a vagina helps us know how better to wipe bottoms, wrap up poop and toss it to the trash, and how to close those sticky tabs so they do not cut off the circulation in darling baby’s chubby little thighs.

Here Is the Message

Feminists Can Make You Rich

Economists in the Journal of Human Capital have adduced that if the gender labour gap were completely closed, per capita GDP would be 15 percent higher among Organisation for Economic Co-operation and Development countries. For Latin America, the per capita gain from closing the gap would be a whopping 17 percent.

The United Nations estimates that women could increase their income globally by up to 76 percent if the employment participation gap and the wage gap between women and men were closed. This is calculated to have a global value of $17 trillion. 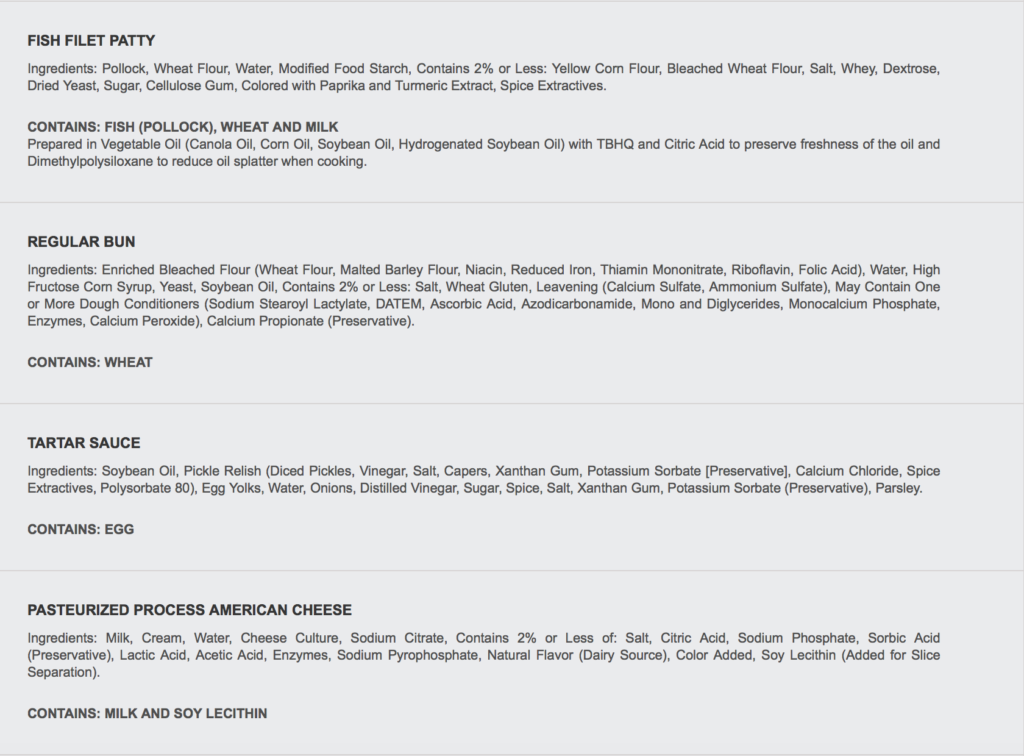 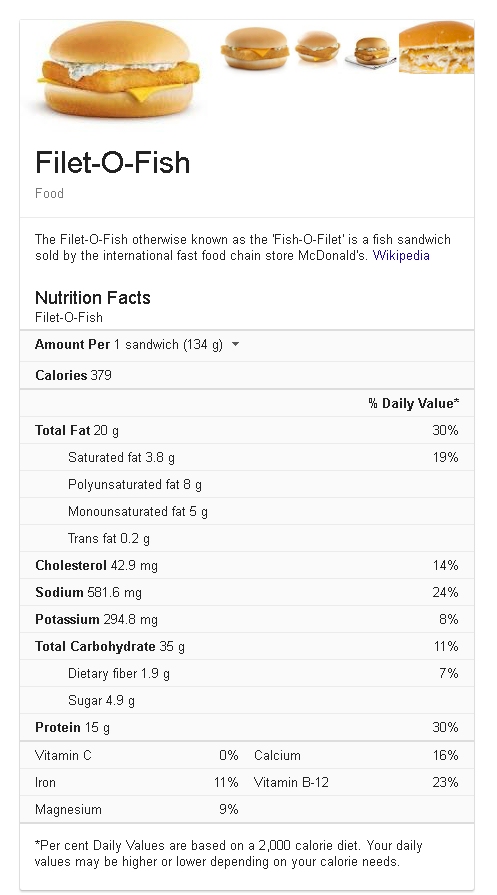 Additional articles on this topic.