At the PMA ceremony today, Duterte in his speech to the graduates prattled on incessantly against the ICC and the European Union which he accused of having created the International Criminal Court to his detriment.

Duterte has come under fire for decades because of his penchant for killing people through surreptitious death squads in the Philippines. Around the world Duterte’s friends seem to be a list of “bad movie” actors accused of being rapists like Donald Trump1 and Steven Seagal2.
In the Philippines Duterte stands accused of mass murder.

Numerous cases presented to the International Criminal Court  (ICC) will go away, believes Duterte who terminated the Philippines’ membership. Duterte launched  a campaign in the same breathe to get other nations to ditch the ICC.  The RINJ Foundation Women  raised accusations related to the crime of rape in a warzone against Duterte’s Armed Forces of the Philippines (AFP).  Additionally there are accusations of murdering a class of people leveled by ordinary citizens of the Philippines against:

Last week Duterte pulled the Philippines out of the Rome Statute and the ICC saying that the ICC Office of the Prosecutor was conducting “baseless, unprecedented and outrageous attacks” against him. But the truth is that there are very many complaints to the ICC representing hundreds of thousands of ordinary people. RINJ alone has over 100,000 members in the Philippines. The ICC is a recipient of complaints and has moved very slowly in these matters, doing so only because the people of the Philippines have asked for the Court’s assistance while no Philippines’ tribunal of any kind has been willing to hear the murder charges against Duterte and his henchmen. The murders are estimated to exceed 17,000. If the number was one it would be too many extra judicial killings.

Duterte refers to the delayed reaction of the ICC to investigate Duterte’s twenty-five  years of mass murders in the Philippines of which the last two were while he was president and more in line with the authority of the ICC. Unequivocally all Courts within the Philippines are under Duterte’s absolute control. Duterte and his henchmen have complete impunity for any crime except those that offend Duterte.

Today Duterte urged all nation-members of the Court to pull out just like he has done. He further added that he would lean on nation members to leave the court.

Read: “Is Duterte a Benevolent Dictator“

The ten nations of ASEAN that Duterte disrespected this weekend are: Brunei Darussalam, Cambodia, Indonesia, Laos, Malaysia, Myanmar, Philippines, Singapore, Thailand, and Vietnam. There is one observer-state, Papua New Guinea.

Australia, which helped Duterte fight militants in Marawi and donates over $60 million annually for poverty reduction in the Philippines is miffed. ASEAN-Australia news has been drowned out in the media by speculation on why Duterte snubbed the “must-go” ranked conference.

According to at least one woman working at the Malacanang Palace complex, Duterte advisors are telling him there is a possibility that he could be arrested outside the Philippines.

The International Criminal Court (ICC) has faced many challenges since its inception but securing an arrest for its suspects has been the worst. Silvia Fernández de Gurmendi is the present-day president of the ICC. She seeks to avert what was founding president Philippe Kirsch’s achilles heel–executing arrest warrants. The ICC has no option but to rely on State parties or ICC members to implement arrests.

In the case of Rodrigo Duterte, because of the global fear of a single nation controlling the ramparts of the South China Seas, his friends are few. Duterte has in effect handed control of the South China seas to China, playing that country against the rest of the world. In short, both China and Russia have a vested interest in Duterte remaining in office having assisted his presidency and helped him get elected. Few other nations would prop him up as these two have.  Donald Trump has congratulated Duterte for his method of solving an alleged drug problem by murdering drug users but no one in the world has respect for Donald Trump. For America to lose access to one third of the world’s sea trade and have no access to the oil-rich South East Asian waters, the failure would be calamitous.  China is pretty much in the driver’s seat and forcibly owns the South China seas. Hence the personal support of Trump is just another autocratic lunacy and not a presidential act of POTUS.

Which state Would Execute a Warrant For Duterte’s Arrest

Australia, a member of the IC Court, is very much a Rule of Law country. Australia signed the accord that created the ICC on 9 Dec. 1998. It then ratified the Rome Accord on 2 July 2002. Australia has a powerhouse interest in the security and free passage through the South China Seas, something with which Duterte has played considerable foolhardy trouble-making games against the United States and its allies plus other concerned parties in the region.

The ICC is not likely to issue a bulletin to Duterte that there is a warrant for his arrest, under the circumstances.

What was the ruling in the South China Sea case? Would the International Community Hold a Grudge Against Duterte?

The Scarborough Shoal is claimed by China, Taiwan and Philippines.

The Paracel Islands are claimed by Vietnam, China and Taiwan.

The Hague international tribunal overwhelmingly backed the Philippines in a case on the disputed waters of the South China Sea, ruling that rocky outcrops claimed by China – some of which are exposed only at low tide – cannot be used as the basis of territorial claims. It said some of the waters were “within the exclusive economic zone of the Philippines, because those areas are not overlapped by any possible entitlement of China”. The tribunal furthermore found China had violated the Philippines’ sovereign rights in those waters by interfering with its fishing and petroleum exploration and by constructing artificial islands for military bases.

Duterte has not made any friends by setting aside the Hague tribunal decision and allowing China to militarily take over the islands of the south China Seas.

Infuriating countries like Vietnam and the United States, Rodrigo Duterte in 2016 handed the Spratlys and the Scarborough Shoal to China which has built fortresses in the region.

ASEAN-Australia which Duterte ditched and which finished up today focussed on two main issues: the human rights abuses by Myanmar and the South China Sea conundrum.

Vietnam remains the most vocal in the dispute with the Philippines backing off under China-friendly President Rodrigo Duterte. Taiwan, Malaysia and Brunei also have claims. 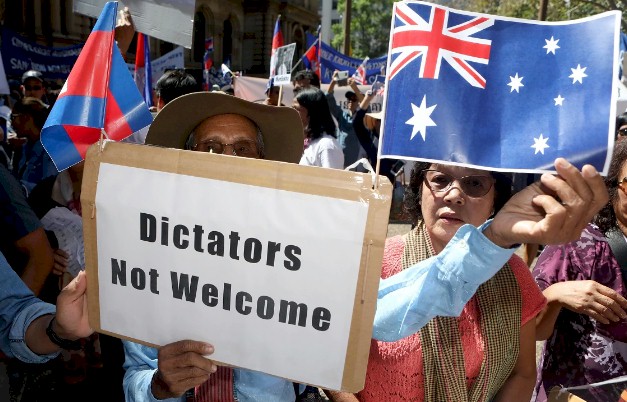 Researchers conclude that in 2016 approximately $281 billion worth of trade flowed through the Sea each month, over $9 billion per day for an annual total of $3.37 Trillion, impacting the entire world.

Filipinos are not happy with Duterte selling out on Philippines sovereignty but the bullying Duterte administration is formidable and is itself afraid of Duterte with good reason. Duterte murders opponents or has them jailed indefinitely. 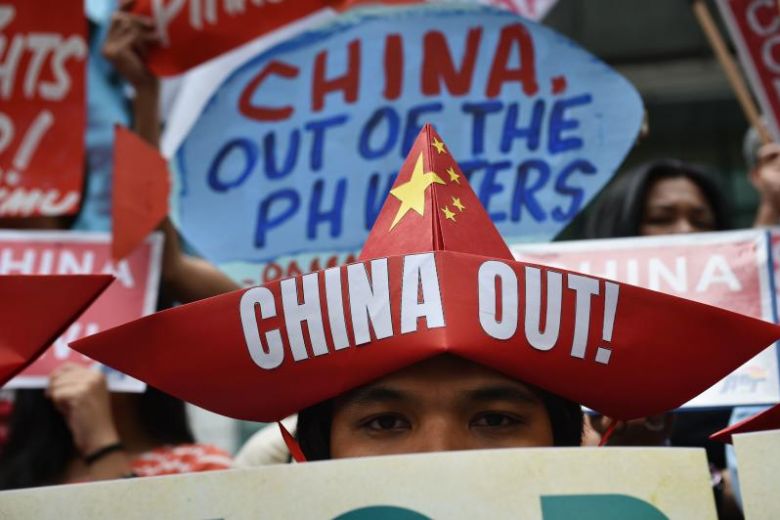 The United Nations Security Council (UNSC) is now composed of 15 Members, five are permanent members: China, France, Russian Federation, the United Kingdom, and the United States, and ten states are non-permanent members elected for two-year terms by the General Assembly. (The year in parenthesis is the end of term date.)

Duterte, without warning, once a warrant has been issued, would likely be arrested traveling to these countries while they are members of the UNSC. Not just Duterte but dozens of his henchmen have been fingered for crimes against humanity by more than five significant complainants.

Rodrigo Duterte has done more to increase the numbers of rape and incest crimes in the Philippines than any person or event in history. The RINJ Foundation has repeatedly complained that Duterte in the Marawi War of 2017 caused his troops to use rape. Furthermore, Duterte’s issuance of a pardon for murderers has allowed rapists to commit their crime with impunity, making certain victims do not talk. Rape survivors fear for their lives. Nevertheless many contact the RINJ Rape Hotline

The RINJ Foundation adduces that Rodrigo Duterte commissioned his soldiers to use rape and other sexually violent crimes as a tactic of war in order to deliberately target civilians or as a part of a widespread or systematic attack against civilian populations and that this action significantly exacerbated the armed conflict costing many lives and extended the imposition of martial law and may impede the restoration of peace and security indefinitely in Mindanao provinces of the Philippines.

In doing so The RINJ Foundation seeks an indictment against Duterte in the International Criminal Court for Duterte’s violation of UN Resolution 1820 (2008) adopted by the Security Council at its 5916th meeting, on 19 June 2008 and similarly in violation of the Rome Statute.

The RINJ Foundation currently uses mostly conventional methods for gathering information for each war-crime victim including a basic three page information data-collection form which provides sufficient information for the collection of data that would bring to jurists for each victim or survivor-witness,

Mr. Duterte’s trolls and trouble makers harassing the RINJ Foundation on its telephones and social media presence have taunted that women should have no interest in the governance of the Philippines. That is a serious mistake. The RINJ Foundation Women fight for the safety of women and children around the world. Incest, rape and murder of women and children form the bulk of complaints raised by the Foundation’s one hundred thousand members in the Philippines. More than that, women do have opinions about every aspect of life on Earth. Duterte and his misogynist gangs do not subscribe to theories of gender equality.

If You Have Been Raped Contact the PH Rape HotLine

1 – In at least one instance of rape allegations, a federal lawsuit filed in New York accuses Donald Trump of repeatedly raping a 13-year-old girl more than 20 years ago, at several Upper East Side parties hosted by convicted sex offender and notorious billionaire investor Jeffrey Epstein.

2 – Regina Simons, who was 18 when shooting a film in 1993, told the Wrap that Seagal assaulted her after he invited her to a party at his house. On arrival, she discovered that no one else was there and says she “froze” when Seagal began to have sex with her. Simons said: “I think because of the situation I was completely caught off guard. Tears were coming down my face and I know that it hurt.”