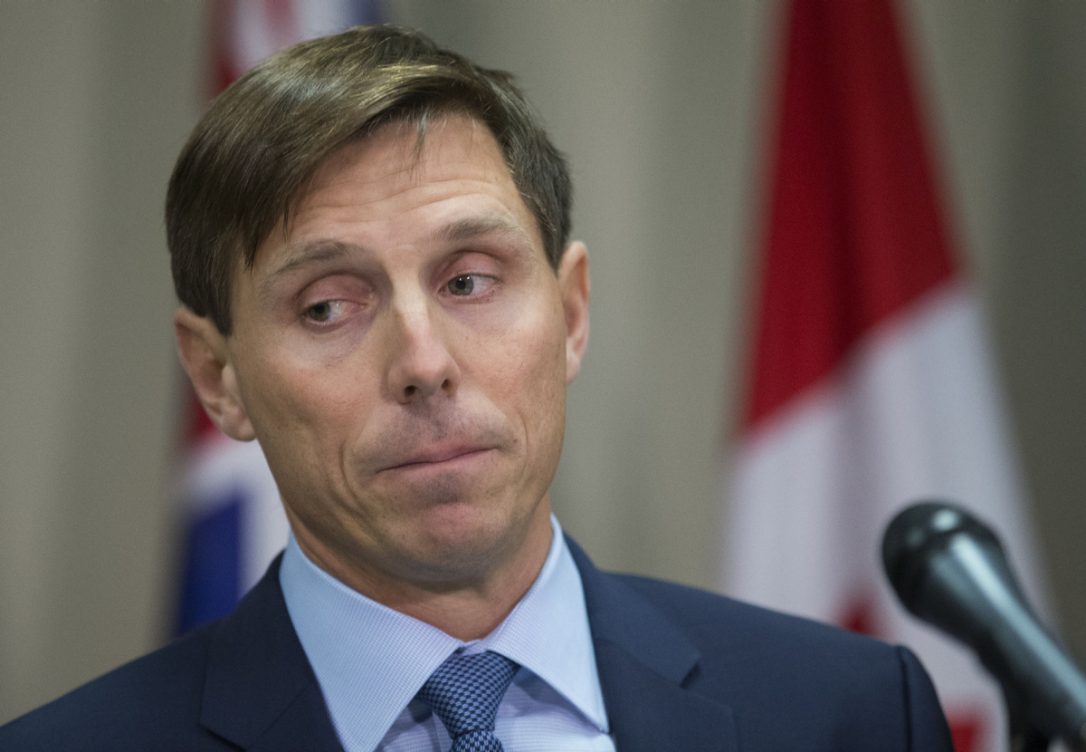 Ontario Progressive Conservative Leader Patrick Brown says he “categorically” denies allegations made against him but provides no details.

Imagine being raised in Ontario, Canada as a male with “entitlement” over females. You decide you are interested in a career in politics for your own reasons and upon seeing your opportunity you throw your hat in the ring and the campaign begins with all its challenges, emotional highs and lows and its adrenaline rushes and adulation. You are winning. You can’t do anything wrong. You are the great “me” and “me” cannot be challenged, turned down or heckled. You are sharp as a tack when it comes to hearing and defeating all criticisms. To stay on top you must have power and control over all “nays”. You need every vote. Every heckler is a potential influence on opinions of you and more importantly, votes. Sadly, for humans, this translates into all aspects of life, including sexuality. Power and control.

Intelligent people know how to combat their own deficiencies. People with balanced minds stay clear of trying to live out their fantasies. You just know that your emotions are being manipulated by a small aspect of your life, your job, your career. But that is not your life. Your family is your life; the family you have, or the family you will have. One misstep guided by the swollen head syndrome created by sensations of power can destroy what is truly important to you. People like Patrick Brown are not guided by a valid moral compass that steers them away from ruinous misconduct, they are guided by a quest for power and control. No good will come from that.

Sexual assault and rape are crimes of power and control over another person.

For some men there is a bizarre sense of entitlement over women that drives them to commit such crimes. That is called misogyny.

Sex offenders should not be allowed to remain in society without being rehabilitated and should not be officials in public life creating public policy because that puts the public at risk. Human development is not helped in any manner by having public officials who are offenders against human rights.

Sexual assault and rape are crimes committed as a conscious pre-meditated decision of a certain segment of society. While knowing that their action is criminal in nature, they commit a violent violation of another person’s rights.

Listening to the allegations of sexual misconduct against Patrick Brown, a leader of a political party in the province of Ontario in Canada, one might wonder with an election in four months, what might motivate two women to come forward to the media  with allegations of sexual misconduct against the leader of the Ontario opposition (Progressive Conservative) party. Whatever you like or dislike about the timing it is no less true that these allegations will save you from having one more politician in office who does not care about human rights of anyone.

Think about it. Laying on a drunk passed-out kid grinding his erection into her thigh and kissing her vigorously is not acceptable conduct. One women has described what is in fact a crime of sexual assault. It can get you from one year up to 10 years in Canadian prison if convicted as an indictable offence. As a summary offence the penalty would be 90 days to 18 months. It is one of those offences in Canada that can be charged either as a summary offence or an indictable offence. Much would depend on the Crown Attorney evaluating the case. Mr. Brown needs to go away and deal with these issues. It is not the job of the electorate to solve this. He must go.

Under no circumstances is an intoxicated person able to give consent to sexual activity. Not possible. If you have contributed to the intoxication of a person and then subsequently have presumed some level of consent to conjugal relations you are committing a crime against the person. You are also violating universally accepted human rights.

The average person should never enter another person’s personal space without consent, let alone touch them in a manner of touching normally reserved for consenting conjugal partners.

For contact of a sexual nature you need to have not only consent but a valid, open conversation and an agreement about what level of contact is being consented and a discussion of all intents. Full agreement of the parties is a must before any physical contact commences.

We also know from vast experience dealing with thousands of cases of sexual violence that 98% of all sexual assault allegations are true. In some communities that number may be higher.

We have only heard Mr. Brown’s denials that any of this happened. We have not heard his account of the events as they have been set out by reputable interviewer/reporters of these witnesses’ statements. We have read no statements given under oath. Under the circumstances because these allegations are made in the media it may even be unlikely that a successful Court trial could follow the current media trial. So these witnesses may not get “justice”.

Justice for Mr. Brown is fair and square. Public trust is a precarious thing. People elected to public office as lawmakers must meet a higher standard of conduct than ordinary citizens.

Any sexual activity without consent by a political leader or public policy official in Canada is intolerable today as we cope with tens of thousands of young women and children raped in ethnic cleansing in Shingal, Mosul, Sudan, Deir Ezzor, and Myanmar military’s campaign of execution, rape and arson against the Rohingya, which the United Nations and United States have labeled ethnic cleansing. Why would Ontario want a political party leader who does not believe in “consent”? Maybe he got caught up in Canada’s rape culture years ago and like Donald Trump believed he could do anything he wanted to women?

The RINJ Foundation fights for the safety of women and children all over the world. Sometimes that fight gets bloody. In this case it has cost a man a career. So be it. A career in public policy-making demands respect for the rights of all constituents. Exploiting intoxicated young females makes a man the wrong person for public office.

Thank Two Witnesses Who have done you a Large Favour.

What has happened is that the witnesses have done you a favour. It’s a big favour.

Here is the core of this matter. Some people were fooled sufficiently to already have elected a person to public office who does not care about people who would comprise this politician’s constituencies. This man has no respect for another person’s human rights. He just doesn’t care. He has no compassion; no empathy; and no conscience.

Forget about “proof beyond a reasonable doubt” burden of proof. That is mandatory for a criminal conviction. The allegations are brought to the media not the justice system as far as we know to date. That is wrong-minded. Survivors of sexual misconduct need to bring those matters to police in Canada within a short period of time if not immediately. When you don’t you allow an offender to become emboldened by this impunity and bring harm to others and commit even more brazen offences. RINJ sees this as a serious problem.

This media accusation matter is about the balance of probability and 98% of such allegations bear out as truthful. We believe the accusers on the crucial part of their evidence because it is credible.

The people around Brown have vamoosed with poignant resignations. Go ahead and suspect that these people know more than you do about the accused politician’s past conduct.

But in any case, all Ontarians owe these two women a debt of gratitude. We say this knowing full well there could be parochial interests involved or maybe not. Clearly an election is in the wind and that may figure into the timing.  Before it was too late, they told you something important, whatever their reasons for doing this.

These #MeToo heroes have saved us from having another misogynist creep in high political office.

If you are a male politician who has behaved in this way toward women, we suggest you do as Mr. Brown has partially done and get out of public life. Mr. Brown would be well advised to seek remedial therapy and some significant social retraining.

For our part, thank you sisters, for coming forward. #MeToo