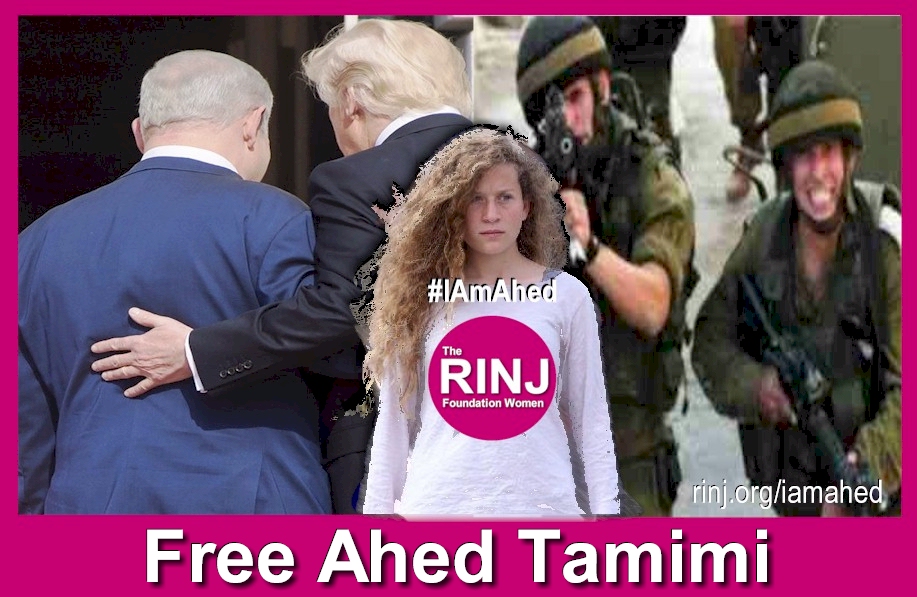 A voluminous list of public outcries from all over the world is haunting the Israeli effort to end Palestine which in the first place is not a valid goal.

The recent global concern for 16-year-old Ahed Tamimi who has been incarcerated since mid-December 2017 on bogus misdemeanor charges may be the pinnacle of three years of rising global worry among Civil Society human rights NGOs. This Israel/Palestine conflict is abusing its children.

Human Rights Watch, Amnesty International, and The RINJ Foundation Women have each expressed considerable alarm repeatedly and make clearly valid points in a fair and unbiased overview. Israel has a despicable flaw in its conduct, targeting children and their moms. Israel must find a new direction immediately. Global opinions may lead to intervention. Heed this warning.

Say “No” to Child Soldiering but Don’t Hurt the Kids

Meanwhile Palestinians should be flagged for putting children and their mothers front and center as “soldiers” in the pro-Palestine demonstrations. It’s one thing for children to carry signs, to wear costumes, and to make some noise, but any level of encouragement to child violence is unacceptable and comprises the deplorable tactic of turning children into “soldiers”.  Human rights violations are sins from both sides. The world is disgusted at the sight, from either side.

Let’s be honest. The recent blunder of Donald Trump and Benjamin Netanyahu declaring all of Jerusalem to belong to Israel as the capital of that state has riled many people. Apart from breaking fifty years of stable public policy, it is a heartbreaker for generations of Palestinians and Christians. The UN General Assembly almost unanimously rebuked Trump’s public statement in early December last year.

America’s new authoritarian White House driven by lunatic-fringe Neo-Cons is in sympathetic vibration accelerating Israel’s quest for impunity on human rights violations and fueling its arrogance to even exceed its long history of abusing domestic Arabs. At what point did or will Israel’s conduct become ethnic cleansing?

Israel is using an American model of arrest and detention without cause where the “Patriot Act” applies to non-citizens and allows ignoring the Constitutional and common law Human Rights. Because of this similarity in civil abuses, Israel has widespread American support for its abuses.

You could also surmise a sick symbiotic relationship of the two nations, Israel and America, based on racism: both nations collectively and passionately hate Muslims.

It’s not hard to understand why emotions run high on the Palestinian side. Just the sight of Donald Trump makes millions of women want to vomit. Few people in the world are as obnoxiously hateful of women and children as is Donald Trump. But stop there. It’s one thing to fantasize about running out the door throwing rocks or slapping faces but don’t do it and do not put your children up to violence and public disobedience.

#Trump‘s “slap in the face of #Muslim world” is a call to multilateral action. Get going! Fix #JerusalemIsTheCapitalofPalestine dispute by
* poll East #Jerusalem neighbourhoods willing 2 go the distance;
* Declare that Capital of Palestine; &
* Create the @StateofPalestine pic.twitter.com/lI7014cVH5

Is Israel Deserving of the Criticism?

Yes, but so also is Palestine. Both sides are abusing children. Palestinians push their children into dangerous situations encouraging them to throw stones and attack soldiers at demonstrations, especially in front of media, and Israeli Occupying Forces (IOF) are not only abusing the children in violent arrests but the military detention system is horribly abusing the kids and even causing their deaths. Some claims suggest that Israelis are currently holding as many as 1200 kids and arrest as many as 700 per year.

Palestinians in the West Bank are not protected by any ‘Constitution’ or Human Rights Statutes because they are subjected to an “inmate” status prior to actual arrest. An example of this is the midnight invasion and detention of Ahed Tamimi and later, her mother, when she attended at a military jail to see her child. Our historical research suggests that there have been many scenarios exactly the same done by the Nazi Gestapo pre-WWII. Where is this going?

Both America and Israel behave this way using “terrorism” as an excuse to violate their own constitutional, and both domestic and international human rights standards. It’s getting monotonous. Most of the terrorism in both countries is done by mentally-challenged anarchists having lengthy psychotic episodes. Trashing of human rights has no justification and is contra-indicated in the quest for human development. In the latter two categories, human rights, and human development, both countries get failing grades.

Notwithstanding our Criticism, Palestinians are not compelled to Submissiveness. Ahed Tamimi Commit No Crime* and Must Be Released.

*Ahed Tamimi allegedly commit a misdemeanor but has the universal right of self defence.

Active resistance to armed occupation is not only acceptable, it is both encouraged and lawful. That doesn’t invite murder and mayhem, it allows a commensurate response to the occupation to end the oppression and become free again.

In Mosul, Iraq we used the model of MuR. Mouvements Unis de la Résistance was a French Resistance organisation, resulting from the regrouping of three major Resistance movements in January 1943 and also the merger of the military arms of these movements within the Armée secrète (Secret Army). At no time did they use children. At no time did we use children. In fact MuR (Mosul Underground Resistance) and  Mouvements Unis de la Résistance hid the acts of resistance parents from their children. This cannot be overstressed. The use of children in any form of militant action is criminal in nature no matter how valid your cause may be. Do not do this any longer. This must cease from both sides.

There’s a reason we have used the example of Mosul, Iraq and a resistance group called MUR (Mosul Underground Resistance). Many Iraqi citizens not only fought the so-called “Islamic State” occupation but also sacrificed their lives to protect families and friends from the brutality of this deviant-sex-seeking, money-greed-driven collection of the world’s worst psychopaths called ISIS.

The world agreed the resistance to ISIS using a commensurate level of force to the occupation was lawful. The same should apply to occupied Palestine. But, a comparison of the IOF to the soldiers of ISIS is a non-starter. IOF soldiers are not the brutes of ISIS so don’t go down that line, but the State of Israel’s underlying strategy to oppress and manipulate a large community is identical to that of ISIS. The IDF would refuse to use the extremists methods, and they don’t, but they have a high level of guilt nonetheless, perhaps owing to bad training. Their behaviour is not a lot different from UN Peacekeeping troops who have been violent toward their protectorates plus raping and beating women and children.

At what point began global tolerance for attacking the safety of women & children? Was it the Boco Harem abuses in Nigeria? Did the recent past mass enslavement and massacres in Shingal numb our outrage? For the extreme prejudice of killing off women and children there is only one end game: species extermination. Hence, any step down that path is a crime against humanity.

Reasonable resistance by Palestinians to oppression is legally acceptable — cooperation with occupation is not required by law. Reasonable resistance should mean resistance using means that are commensurate with the threat. This is worth repeating. Both sides should take note. Failing to heed this warning may lead to international indictments against leaders and others. That day approaches already. Patience for the Israeli/Palestinian drama has been stretched to the limit as both sides exploit children as a force-of-intimidation multiplier.

With its creation in the wake of the Nazi experience, Israel should know better than to incarcerate and abuse children. The shame has fallen to Israel.

Demonstrate that YOU can be Part of Non-Violent Humanitarian Action & Respond peacefully with us to Israeli Child Abuse.

We join Amnesty International in its demand that Ahed Tamimi be released from prison and bogus charges against her be dropped.

Release, without any delay, 16-year-old Palestinian activist Ahed Tamimi, who could face up to 10 years in prison.

Ensure that Palestinian children are not subjected to detention or imprisonment except in cases where it is demonstrably necessary and proportionate as a last resort for the shortest appropriate period of time. Amnesty International

Ahed Tamimi was arrested in the middle of the night, interrogated without access to a lawyer, barely given any food and move around three detention centres while sleep deprived. These are only a few of the tactics Israel uses against incarcerated Palestinian minors.