The 1949 Geneva Conventions to which America, Britain and Saudi Arabia are all signatory, says that “it is prohibited to attack, destroy, remove or render useless objects indispensable to the survival of the civilian population, such as foodstuffs, agricultural areas for the production of foodstuffs, crops, livestock…for the specific purpose of denying them for their sustenance value to the civilian population.”

General James Mattis as Defense Secretary supplied in the past two years the weapons and training to the Coalition that invaded Yemen in March 2015.  He also set policy in this American surrogate war allegedly against Iran via Houthi rebels. The Houthi had thrown out the American/Saudi puppet government of Abd Rabbu Mansour Hadi  which had a long  record of graft and corruption with Hadi as the previous Vice President and then President.

Since he became Secretary of Defense for the USA Mattis pushed or in the alternative, supported a strategy-change in Yemen that increased the attacks on civilians and their food supplies. The strategy had been formed in 2016 by Mohammed bin Salman, then Saudi defence Minister, and approved in the USA by Ash Carter, Mattis’s predecessor who began the enormous levels of support by the US military against the poorest country it has ever encountered. At least one member of the so-called Coalition against Yemen is led by an indicted war criminal.

Mattis is closely tied to war criminal and accused murderer Mohammed bin Salman, the same man who, on the evidence, at 2 October, 2pm, had Washington Post columnist Jamal Khashoggi murdered and dismembered.

“What concept forbids describing Mattis as just another two-dimensional sociopath who hangs out with and facilitates the dirty work of people like Omar al Bashir and Mohammed bin Salman?”

This concept of destroying civilians by killing off the food and medicine supply takes a page from history when the United States slaughtered more than two million North Koreans by carpet bombing farms, irrigation systems, damns, farming villages, farm implement factories, food terminals, food transportation infrastructure and the homes of the DPRK population of civilians.

A genocidal act and war crime of significant proportions,  is the deliberate destruction of the food infrastructure of a country says Behar Abbasi in Sanaa. 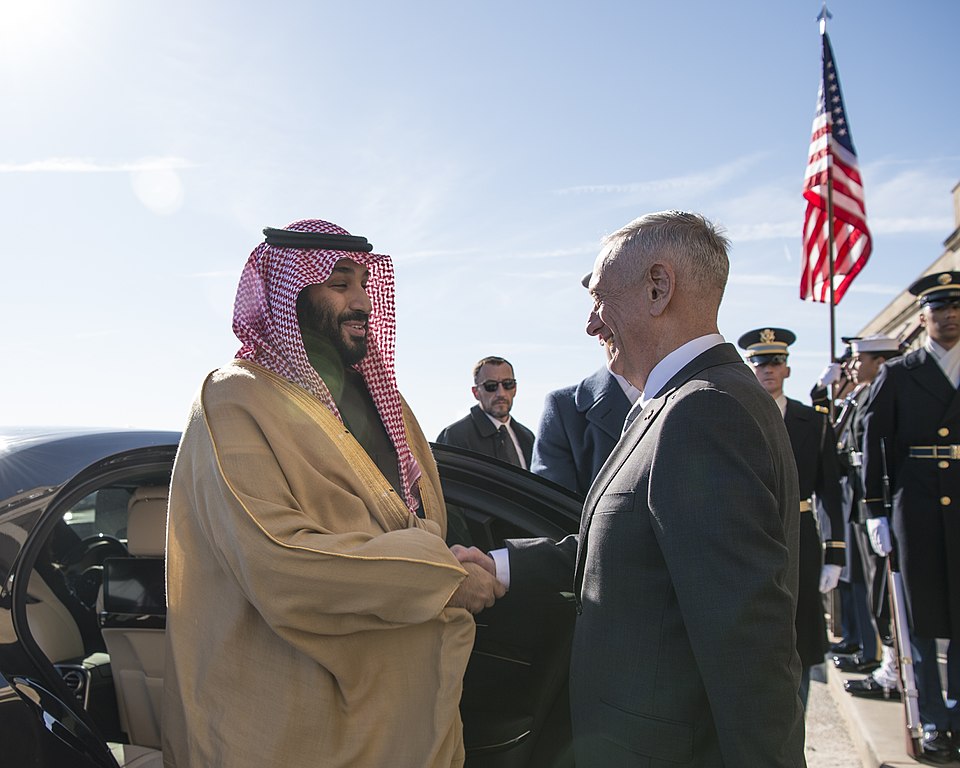 “How does anyone reconcile with the families of slaughtered children? How do you explain to a father, ‘We bombed your child’s school bus on 9 August because…’?, asks Abbasi from Yemen.

The United States has been asked repeatedly to compensate the families of the dead children but has refused. 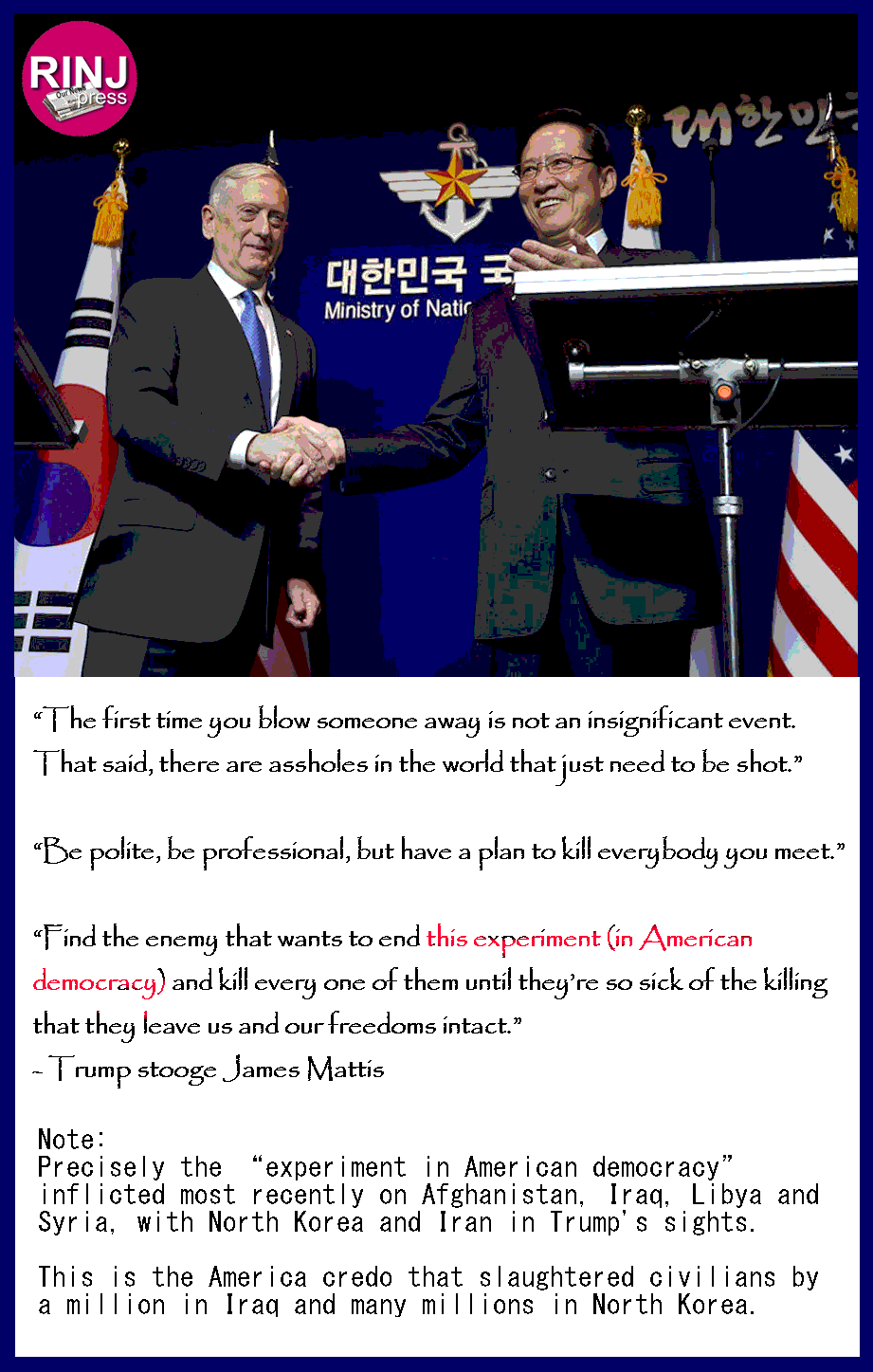 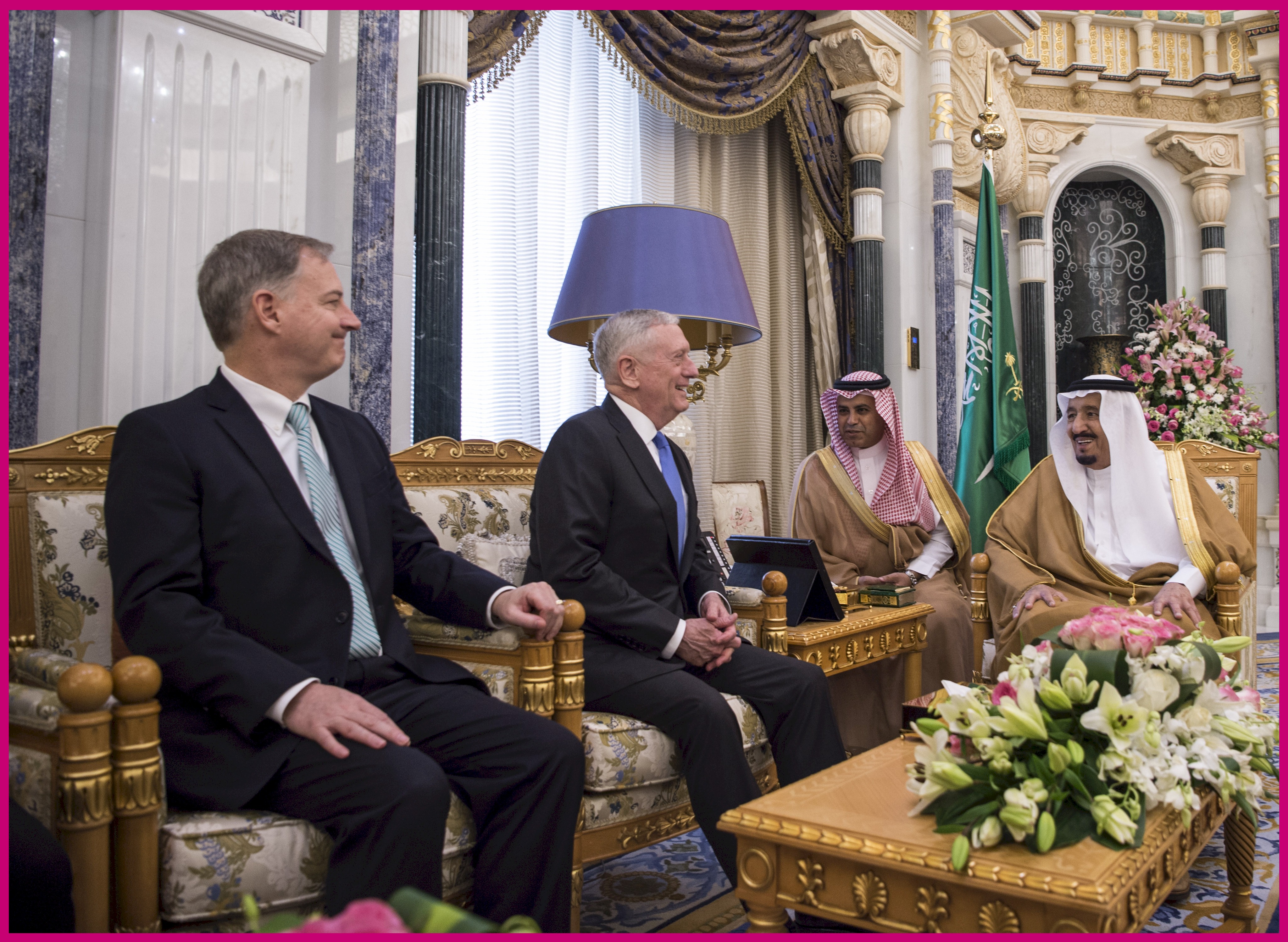 “One of the reasons many women no longer use their medical skills in an urgent care (emergency) ward is because of the kids they have seen torn apart by American bombs”, says a Syrian nurse who is now working in a refugee camp but previously worked in a hospital.

Violating the most basic of Human Rights destroys souls of US veterans who now live under bridges, homeless and mentally ill.

Speaking to a doctor working for The RINJ Foundation in Idlib, Syria, FPMag was told that, “Major trauma to children has caused plenty of PTSD among medical workers but the deliberate famine and disease tactics used by the United States bombing are worse. They are worse because medical workers are looking at children who rely on adults to provide the basic needs of life, and those adults have deliberately killed the children in long, slow, painful ways. This leaves a deep anger and even self-hatred inside the gut that goes past PTSD. Thousands of veterans never recover from realizing what they have done. It is an evil incarnate that commits this form of genocide and at any price this evil must be eliminated from the human race or we face extinction. The people who survive as witnesses to this horror have their own lives ruined by the immense moral wound. It is the work of the most infected minds made manifest.”

The Allegations Against James Mattis and Ash Carter

Since James Mattis became the Secretary of Defense in Washington DC the USA drone and manned bomber airstrikes plus those of KSA and UAE have been intensified hitting at the entire food infrastructure while the US Navy has destroyed or helped destroy over 250 fishing boats by its own indirect admission. This policy was birthed  under former Secretary of Defense Ash Carter around election time, 2016. Carter may not have realized how severe a crime this Saudi Arabia Policy would become under Saudi Arabia’s Mohammed bin Salman. It then intensified to the power of genocide under Mattis.

What Professor Martha Mundy of Tufts University in Massachusetts writes in her report (Google Books),  The Strategies of the Coalition in the Yemen War: Aerial Bombardment and Food War is instructive.

“If one places the damage to the resources of food producers (farmers, herders, and fishers) alongside the targeting of food processing, storage and transport in urban areas and the wider economic war, there is strong evidence that the coalition strategy has aimed to destroy food production and distribution in the areas under the control of Sanaʿaʾ.”

“According to the Food and Agriculture Organisation, 2.8 per cent of Yemen’s land is cultivated,” Mundy says. “To hit that small amount of agricultural land, you have to target it.”

A spokesperson for Save the Children, Mark Kaye, says, ‘This crisis is happening because food and supplies can’t get into the country. Yemen was completely dependent on imports of food medicine and fuel prior to this crisis’.

CARE International’s Yemen director speculated in September 2018 that Yemen may completely run out of food by December.

Following those warnings, the bombing intensified and new airstrikes and naval bombardment on the port of Hodeidah began. The American Naval blockade of Yemen tightened. Technical support administration buildings for agriculture were destroyed, water irrigation systems were wiped out. Crops were destroyed. Food distribution was eliminated. Storage terminals were bombed according to UN aid groups as peace negotiators remained less critical. That worked apparently because a quasi-ceasefire has been reached. But the bombing continues in December by America which has over the past two years struck weddings, funerals, schools, hospitals, jails and worse according to reports from Associated Foreign Press, Reuters and Sanaa TV.

The American President Trump plus this religious fundamentalist nation’s piety advisor, Reverend Evangelist Pat Robertson, made a big fuss about not rocking the apple cart for fear of losing  $100 billion in weapons sales to Saudi Arabia for the further destruction of Yemen.

Today the death toll in Yemen is skyrocketing. The numbers are extremely worse than previously thought.

Jim Mattis is a war criminal. Will he have impunity? These men are such liars that nothing they say is credible in their defence. More than that problem of not being able to find an untainted jury (war criminals have rights too), the US is above all human rights law, it claims, and is signatory to almost no Human Rights treaties.

Is Mad Mattis Mad About Syria and Afghanistan Pullout?

Some people are suggesting that Mr. James Mattis is resigning because Trump is pulling ground troops out of Syria and Afghanistan after Mattis said, “never”, more or less.

Hail to the new Chief? Vladimir says he is very happy the US is leaving Syria. He should be. The best thing for the ordinary people of Syria would be that not just the USA but all unwanted militants take their guns and leave. The people of Afghanistan seem to be of mixed views depending on who one talks with.

Did Mr. Putin tell Mr. Trump to get out of Syria?  There is no doubt in general reportage that Mr. Putin has information with which to blackmail Mr. Trump.  That also is implied by a security source close to US Special Prosecutor’s investigations who refuses to make a specific statement about what that information might be, exactly. FPMag can only confirm that the speculation is growing which is nothing new. But does that matter? One can only imagine after reading documents submitted to courts in the long string of indictments and convictions thus far.

The American Secretary of Defense Letter of Resignation is a revelation of serious ails.