ISIS in Syria and Iraq is less visible but not gone.

Donald Trump’s claim that ISIS has been defeated may mean that he believes the Caliphate has been destroyed. But ISIS as an organization is alive and well as a prolific guerilla jihadist group. It is in the estimation of those who have known the group up close and personal , “more dangerous than ever”.

“What many people don’t realize”, notes Katie Alsop of The RINJ Foundation which has humanitarian workers in the region,  “is that the men of ISIS the public came to know from slavic countries and France were indeed enthusiastic tourists to the organization. Now that those attention-seekers are gone, the core group’s low visibility as a guerilla organization is key to its lethality.  In Deir Ezzor, you never know who you are talking to.”

That leaves only the hard core extremists. Estimates from the  SDF suggest there may be as many as 25 to 30,000 between the two countries. They are seasoned guerilla fighters whom the US special forces were blocking from exiting the region through back doors into Jordan where both ISIS and sympathetic groups keep the border and some safe houses open for their passage.  The US had set up a choke point that almost completely oversaw three borders: Syria-Iraq, Jordan-Iraq and Jordan-Syria.

The organization that Abu Bakr al-Baghdadi led is not gone, nor is al-Baghdadi as of last week or so. The numbers are not drastically reduced either. But they have been forced into a mode with mobility as a high priority for current tactics and long term strategy notes the RINJ Director.

“Daesh look for key areas of instability anywhere in the world where they can take over amidst the chaos”, says Simon Baldock, a security officer for a hospital in Idlib, Syria.

“That will be the next Caliphate,” he mused.

The effectiveness of Russia ‘s troops in Syria has thwarted a resurgence although Idlib is infested with ISIS and nearly every group of extremists on the planet is represented there as well. This will explode in extreme violence soon, fear medical crews in the city. 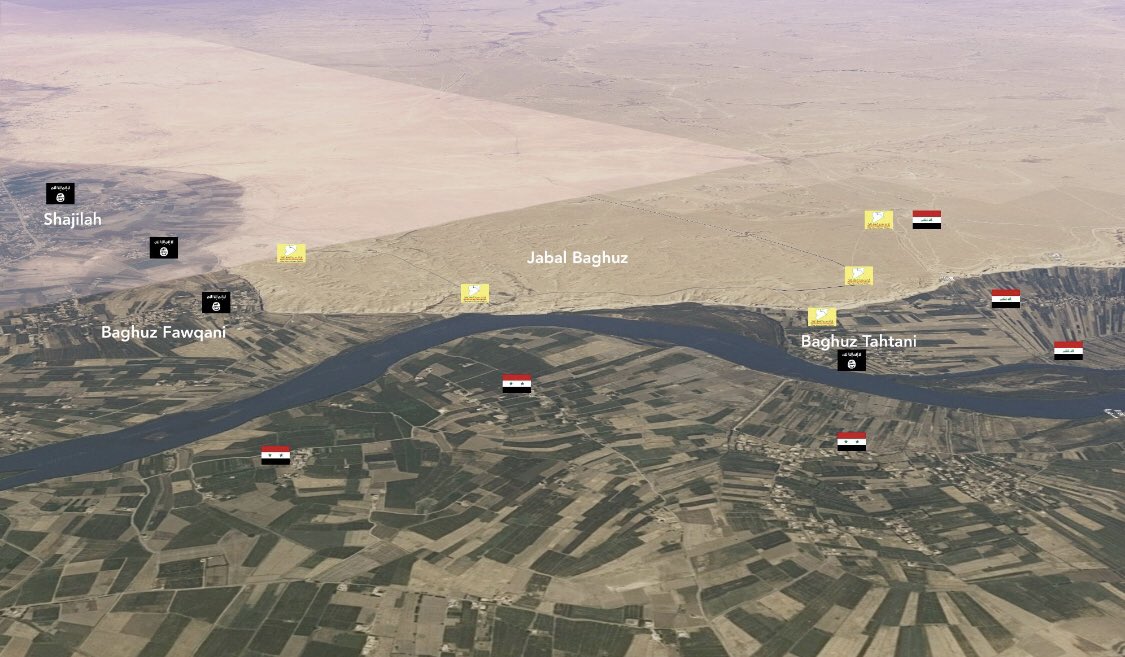 Location of Daesh in Deir Ezzor region along the Euphrates not far from the Iraq border. December 15, 2018. Source: The RINJ Foundation, Syria

A few discoveries are being made in Hajin of the Deir Ezzor region where a battle still rages despite most of the Salafi Jihadists being driven from the area. Some 3,000 ISIS fighters have been bombed heavily and set upon by the SDF,comprised mainly of Kurds, guided and coached by US Forces’ advisors.

The battle for Hajin has been messy because of the bombing. The SDF has losses as does Daesh but the ISIS guerillas did what they have always done in the past year and that is use a predetermined alternate plan of action (PAPA) for retreat to fight another day from a different location. This time they retreated south and west to go bother more terrified civilians and take over their homes and lives.

That’s not entirely true. There are many Daesh members or supporters throughout eastern Syria and western Iraq willing to harbour their guerilla counterparts, on the move.

The article " ISIS in Syria and Iraq is less visible but not gone. " was written by Author: Katie Alsop (Biography, Email) Staff Writer Feminine Perspective. FPMag correspondent for the Middle East and Europe.
Contact Katie Alsop on Twitter ~ Facebook ~ Find on YouTube