Canada was tricked into kidnapping one of the most important 5G technology women in the world:  a recipe for disaster. 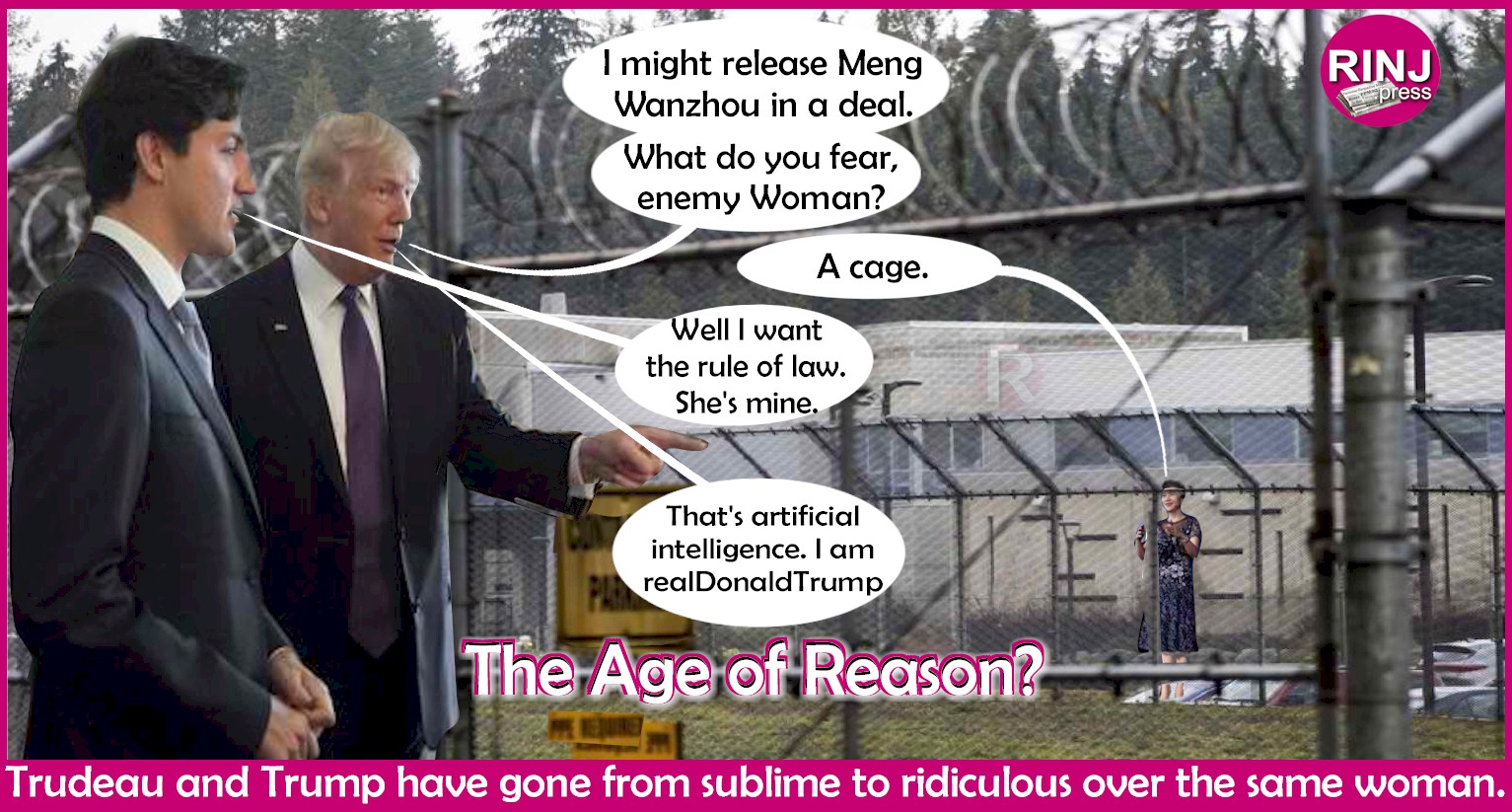 Donald Trump – Justin Trudeau. From the ridiculous to the sublime in the age of reason (artificial intelligence). Art: Rosa, Feminine Perspective

Note: Micheal is a certified expert in Command, Control, Communications, Computers, Intelligence, Surveillance and Reconnaissance (C4ISR) and served as a Canadian Chapter President of AFCEA (Armed Forces Communications and Electronics Association) for 8 years.

These men created a Recipe for Disaster at the expense of the peace and of Canada’s and America’s ordinary civilians.

On America’s instructions, the Canadian Justice Minister compelled Ms. Meng to court in Vancouver on 7 December and tried to have Ms. Meng held in prison without bail for the likely many years its extradition argument would be heard.

China’s foreign minister called in both the US  and Canadian ambassadors on the Weekend of 8-9 December to lodge a “strong protest” over the arrest.

In court on 10 December, the Canadian Justice Minister’s lawyer told the Court that Ms. Meng was transferring to her scheduled flight to Mexico and that meant she was afraid to go to the United States owing to her feelings of guilt. (On Tuesday the Judge scoffed at that.)

In court on 11 December, B.C. Supreme Court Justice William Ehrcke ruled  that Ms. Meng met all the tests and would be released on bail under extraordinarily strict conditions and for huge sums of cash money and real estate surety.

Canada and Trudeau were tricked into Kidnapping Ms. Meng.

There are no good intentions in any of this matter say the people supporting Ms. Meng outside the BC Supreme Court. Some carried signs urging her release to freedom.

“This is about greed, racism and misogyny,” said one who was shivering in the damp cold.

Apparently the US cannot complain Huawei directly or indirectly broke America’s questionable sanctions against Iran’s people because Huawei is innocent.

The US believes that it found a technicality it can use to try and bring down its very successful competitor, Huawei (HWT.UL), which ironically, downplayed by sellers, is one of America’s best customers to Qualcomm (QCOM) and Intel (INTC).

The US knew whatever country took down Sabrina Meng would infuriate China and take a huge beating, so who does the US put that on?

USA could have chosen Mexico which was Ms. Meng’s destination but Mexico is Trump’s latest favorite in NAFTA/USAMC talks and liberal Trudeau is publicly despised and ridiculed by Trump.

Canada’s RCMP  also literally hates the current Liberal government led by Trudeau because as our insider source has said, Trudeau has imposed things like sensitivity training and named a female officer as head of the RCMP which broke the back of at least a portion of the patriarchy therein.

The RCMP  as the US predicted, lept at the opportunity to grab this Chinese woman who is well known in Vancouver for owning two mansions and representing the pinnacle of CHinese elite in Canada and in China.

Trudeau until now has been the best Canadian Prime Minister for the rights of women. What happened? Does he have an ace in the hole? Canadians need that ace. This is a disaster.

“Trudeau should have stopped this farce from the outset”, says Katie Alsop of The RINJ Foundation.

“She’s a woman of character and dignity… deeply respectful of the rule of law … Ms. Meng has a completely unblemished record”, said Ms. Meng’s lawyer in court Monday.

He added on Tuesday that there are many Canadians coming forward–and they literally stood behind him and his client– to put themselves up as sureties and their homes up as collateral.

These Canadians on Ms. Meng behalf, said her lawyer, want the court to know that besides risking their homes they fully stood in heart and mind behind the heretofore global rising star in consumer communications gear.

Trump Confirms that this is a Kidnapping. He defines the Ransom

In his own words, Donald Trump wants from China the largest trade deal ever made. China can then have Ms. Meng: a Kidnap.

When asked  if Trump would intervene in Ms. Meng’s case during an exclusive interview on Tuesday with Donald Trump (as court was still in session)  Jeff Mason and Steve Holland of Reuters were given a “conditional yes”.

“Whatever’s good for this country, I would do… If I think it’s good for what will be certainly the largest trade deal ever made – which is a very important thing – what’s good for national security – I would certainly intervene if I thought it was necessary,” Trump said. 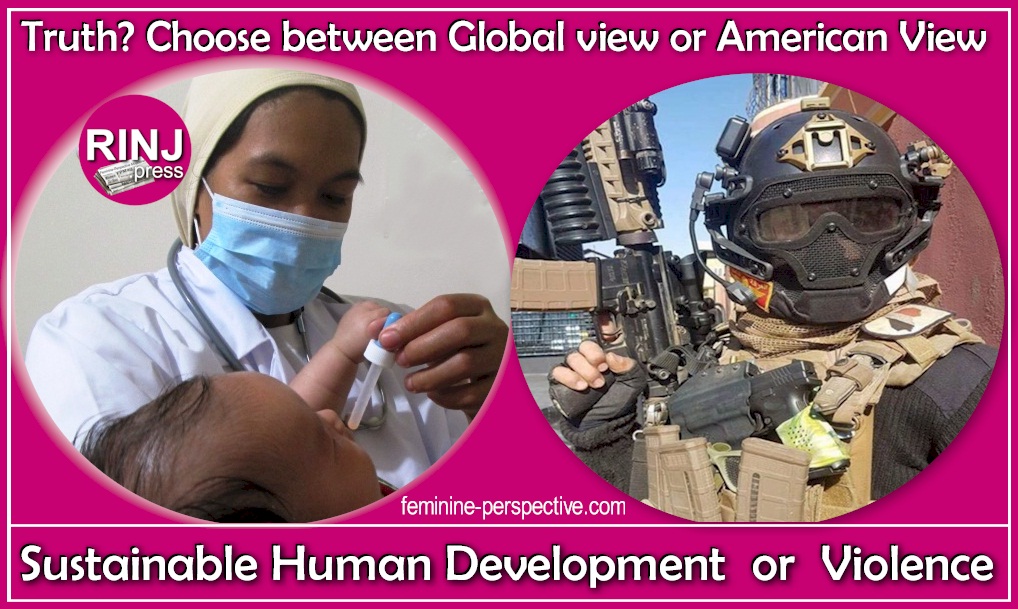 Choose between the Global View or the American view. That is Sustainable Human Development versus Violence.

Meanwhile China has arrested a Canadian, Michael Kovri, who although he may have been a former diplomat, today and since early 2017 he is working in China for the International Crisis Group, which according to Wikipedia’s research is a somewhat controversial security services group headed by a former Australian Cabinet Minister. It does not have NGO status in China and violates a draconian law for the purpose of gathering intelligence about China’s activities. China says Kovrig is spying. While inside one of China’s provinces, Sharon Santiago slammed the detention of Michael Kovrig but noted that China has the colour of right in the backrooms of “Embassy Row” in Beijing for obvious reasons. The detention of Kovrig comes as absolutely no surprise to many and is unrelated to the Meng matter, reports Santiago. The Chinese were considering the arrest of Kovrig long before the fateful meeting in Nova Scotia when the Five Eyes decided to push ahead the arrest of Sabrina Meng, suggests a former Chinese Army major from Beijing, now living in Canada.

Since 2016, this is a crime in China, says Katie Alsop of The RINJ Foundation. She notes that, “since RINJ began slamming the mistreatment of Falun Dafa and Falun Gong members in 2012 until it filed a formal request for information to the China government and the UN regarding organ harvesting of the Falun Gong prisoners, China has compelled all Civil Society organizations to file  a funded request for NGO Status.

RINJ was denied by China and subsequently issued global notice that it would not be impeded and “RINJ claims full & unfettered freedom in the exercise of its functions.” It didn’t do much good and members of The RINJ Foundation have been detained, accused of being Falun Gong practitioners and later released.

RINJ’s revised charter is located at rinj.org/charter/summary. A public version of the request is published on their website as Falun Dafa Women face rape, organ harvesting.  Feminine Perspective published an update of the years of RINJ campaigning for Falun Gong women’s rights at RINJ Slams China for Rape of Falun Dafa Women“.

Says Katie Alsop, under China’s laws it legitimately holds  Michael Kovrig but the law itself is not legitimate and is a violation of human rights because it denies to ordinary Chinese citizens the oversight and assistance of global civil society.

In response to all of this, Justin Trudeau says that Canadian and Chinese officials are talking and scoffs at Trump with, “Canada is a country that operates under the rule of law,” but on the facts of the Meng-matter, appearances indicate Canada’s police jump when America says “jump” no matter what Canadian law may be.

Holding Ms. Meng, given Canada’s scurrilous attitude toward Huawei and America’s racist and sexist bent toward China, is an outrage.

Statement of the Embassy of the People’s Republic of China in Canada.

At the request of the US side, the Canadian side arrested a Chinese citizen not violating any American or Canadian law. The Chinese side firmly opposes and strongly protests over such kind of actions which seriously harmed the human rights of the victim. The Chinese side has lodged stern representations with the US and Canadian side, and urged them to immediately correct the wrongdoing and restore the personal freedom of Ms. Meng Wanzhou. We will closely follow the development of the issue and take all measures to resolutely protect the legitimate rights and interests of Chinese citizens. Embassy of China in Ottawa