Here in Toronto, Canada, we are the focus of Incel MRA websites cheering the deliberate murder or maiming of 25 Canadians by a man who claims he represents an army of Incel misogynists.

There will soon be three and a half billion angry women on Earth. – Melissa

Meanwhile in Kuwait, a group of equally rotten misogynists are getting pissy with South East Asia because they believe they have the right to rape, beat and even murder their female Asian domestic workers: their Filipino maids to be precise. 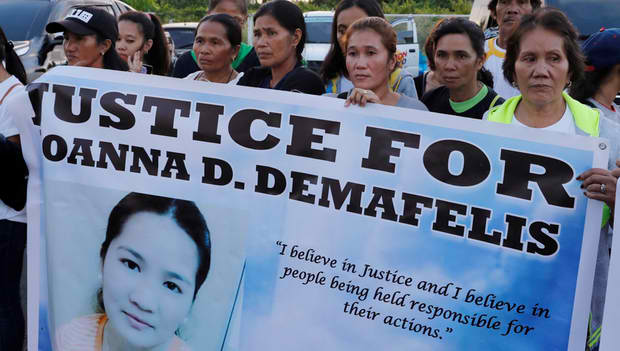 Since 2016, two dozen Filipino workers in Kuwait were so upset with their condition they commit suicide. But many are also murdered as in the case of Joanna Demafelis who was found in a freezer of her Kuwait employer in February after being tortured and killed. Since 2016, 200 Filipinos have died in Kuwait servitude.

Their families are bewildered and heartbroken when they learn of the sexual violence, beatings, torment, torture and horrible working conditions Filipino workers endure in Kuwait.

Getting attention to the tens of thousands of human rights complaints from migrant workers from Indonesia and the Philippines against Kuwaitis is next to impossible. No matter how hard one pushes the subject the Kuwaitis push back with arguments that complaints are only ploys of other men who “own the women“.

“The case of house workers is just a façade for other issues that include business deals, commissions and commercial contracts between officials in Kuwait and some sides in the Philippines,” Kuwaiti MP Mubarak Al Hajraf said.

“[The Philippines complaint]” is a cover for other issues being exchanged in media circles like money laundering, commissions and commercial deals between officials in Kuwait, specifically the foreign ministry, and certain sides in the Philippines”. 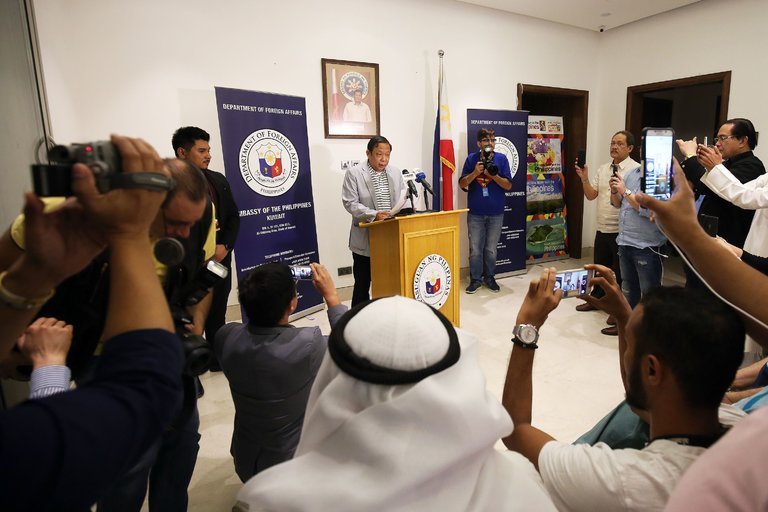 Indignant Kuwaiti men quarrel over right to beat, rape and kill the other side’s women.

They are kicking out each other’s male ambassadors over a fight about the right to rape, beat and murder female nannies, maids and other domestic helpers in Kuwait from the Philippines. In this picture of a group of men clamouring to get into the fight, Philippines Ambassador to Kuwait, Renato Villa, is getting ready to pack his things. He got the diplomatic heave-ho  yesterday and needs to be out of Kuwait by next Tuesday.

Meanwhile the Kuwaiti envoy to the Philippines, Musaed Saleh Ahmad Althwaikh, under orders presumably from sneaky Kuwaiti Prime Minister Shaikh Jaber Al Mubarak Al Sabah, snuck out of Manila secretly in the dark hours of April 25 with his tail between his legs.

“Kuwaitis Are Pigs Who Abuse Asian Female Workers” — Thousands of women have told us this over too long a period, decades in fact. I am not going to share their stories at the moment. I have flames coming from my eyes and do not want to cry.  You Kuwaitis are some kind of sick. Yes, it is true and I am saying it: “Kuwaitis Are Pigs Who Abuse Asian Female Workers”. It’s not about money or labour laws it is purely and simply misogyny.

For many Filipino workers, the abuse they received was so bad they begged their embassy to rescue them, which they did but not without the Kuwaitis arresting the embassy staff.

The Kuwait government claims that the April 2018 “rescue of Filipino domestic workers” is a publicity stunt but The RINJ Foundation Women for years have met with liberated females in Kuwait who originally hailed from Indonesia and the Philippines. Their condition can only be described as terrorized. The stories of their mistreatment are horrid. Waiting to be returned to their home country escapees live in makeshift emergency shelters sleeping almost on top of each other sometimes more than four to a bed made up of blankets spread across a floor. But they are safe and happy to be free. Many present with contusions, lacerations and scars plus tales of sexual violence–the invisible scars. It makes our medical support workers sick to see such evidence of abuse. 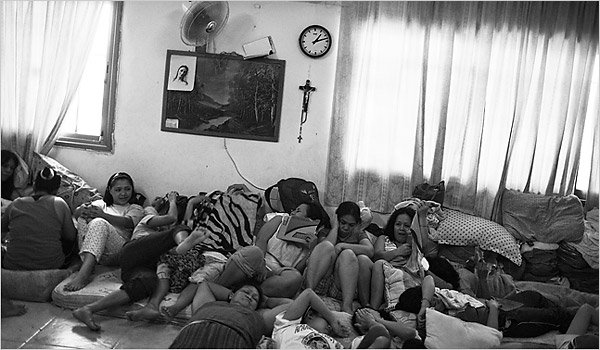 Since February 2018, there has been the greatest outcry from South East Asia over deaths, beatings, and rapes of female workers in Kuwait. Now in some brain-dead tit-for-tat diplomatic brouhaha the main issue of Kuwait’s blatant, national misogyny has taken a back seat. Well your crime is back on the front burner, Kuwait.

Some 150,000 Filipino household workers remain unsafe in Kuwait and from all appearances they are in greater danger than ever. The Philippines President Duterte has offered to pay their way home but most women say they need help escaping from their enslavement. An unknown number of women were “rescued” in some kind of panic attack by unskilled civilian workers sent by the Philippines Department of Foreign Affairs (which now blames its Ambassador) to whisk escapees away from Kuwaiti abusers to shelters pending egress from Kuwait.

The ill-conceived panic attack “rescues” have been absurdly declared by Kuwait to be a violation of Kuwaiti sovereignty which clearly indicates that Kuwait does not consider these Filipino women to have the right to quit their servitude and return home. They are apparently prisoner slaves in the eyes of the Kuwaiti government.

As Ramadan approaches mid-May, Kuwaitis need to bow their heads and apologise to over 3 billion females on planet Earth who are sick of Kuwait’s insults to all women.

Do not bellyache about the angry responses you lunatic-fringe male-rights muslim-activists are getting in your face from the South-East Asians you have pissed-off by raping and killing their female citizens. How dare you THINK let alone claim you have the color of right.

I slap your face with my stinkiest shoe for what you have done to Joanna and thousands of other women you have abused. 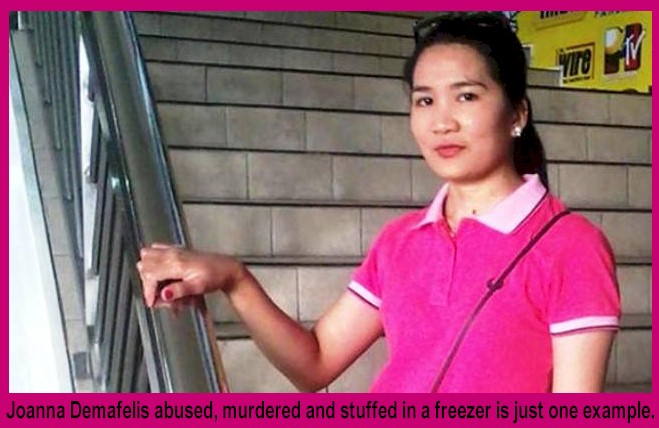 The problem extends beyond Kuwait throughout the Middle East where misogyny has been given an acceptability-boost by Islamic State terrorist monsters that have taken rape and murder of women and girls to bloody disgusting heights of atrocity.
Perhaps the most demeaning kind of domestic violence against women is sexual abuse which leaves victims in a higher vulnerability state of pandemonium and horror.  Trapped between respecting the patriarchal nature of your sick society and ending their pain, women suffer in silence as the male populace is in disagreement whether or not to deem this a problem.  Well, it is a problem.

The United Nations is quick to complain about abuses of Filipinos by the Philippines’ government, but it is time to address abuse that has been delivered against Filipino women for decades by UN members.

Nation state members of the United Nations have, with some remarkable exceptions, treated your Filipino maids and nannies poorly. They are not slaves. They are charming, caring, skilled workers whom you can’t do without because they are that good at caring for your children, homes and well-being. Some of our best nurses around the world are Filipinos. Their skills are in demand and they deserve respect. Can we stand up for them?

So here we are in 2018 after five years of ISIS monsters raping, beating and killing women with impunity, as some looney smashes 25 Canadians in the name of Involuntary Celibate Misogynists and Kuwait wants to smash the Philippines because the Philippines people are angry about their raped and murdered overseas workers.

International Sanctions should be brought against Kuwait. Kuwait needs a wake-up call.

Maybe you should pay attention to the RINJ Foundation Women because your wives, mothers, sisters and daughters may agree with us. Stop abusing women and stop ignoring those men who behave that way.

Kuwait is ruled by a hereditary emir, Sheikh Sabah al-Ahmad al-Sabah who needs to pull his socks up. His nation’s abuse and his tolerance of the rape, torture and murder of women maids, nannies and domestic helpers is just plain sick-minded.

Your country, Sheikh Sabah al-Ahmad al-Sabah, has no color of right no matter what you say “the other guy” has done to offend you. Clean up your misogynistic “shithole” country.

Put your hat in your hand and apologise to the 3,5 billion women of the world. In particular, apologise to the good-hearted, hard-working people of South East Asia, especially those of the Philippines.

America, you need to back us on this. If you don’t, you can plainly see why China is a better friend to South East and East Asia.

Neighbouring Arab states to Kuwait, Saudi Arabia, Bahrain, Qatar, Oman, and the United Arab Emirates plus Egypt, and even the human rights fiasco, Syria, must also end the mistreatment of women.

Kuwait, you better face the music. There will soon be three and a half billion angry women on Earth. Stop persecuting the quarter million Filipino workers in Kuwait and respect their human rights or face an angry world.