…that pushed the country to fall into a dictatorship trap wherein the President picks all the heads of local government, the barangay leaders, and kills or imprisons the people who oppose him; declares a five-year state of calamities which is only a notch short of martial law; and plays opposing nations in South Asia to best benefit his own pocket; is why the the European Union has its jaw dropping to the ground—you said you wouldn’t name me. Promise?,” says a Philippines University undergrad student.

But there are other, less colorful, answers.

Video: “Duterte, the President of the Philippines, who is encouraging his own services to kill tens of thousands of people, still enjoys trade privileges of the EU under the GSP+ scheme, that are supposedly linked to improvements in human rights, but the situation is just getting worse,” she said. “And that’s why I’m so happy that across all political parties, in this resolution, we call on the Commission to start the procedure to revoke these privileges immediately, and to be frank, by immediately, we mean by Monday.”

Says Herminio Lopez Roque Jr., the spokesperson for Rodrigo Duterte, “If they want to add to the burden of Filipinos in this time of pandemic, so be it. They can do whatever they want. If they want to implement it at this time, go ahead. EU lawmakers will be the biggest contributor to the violation of human rights.” 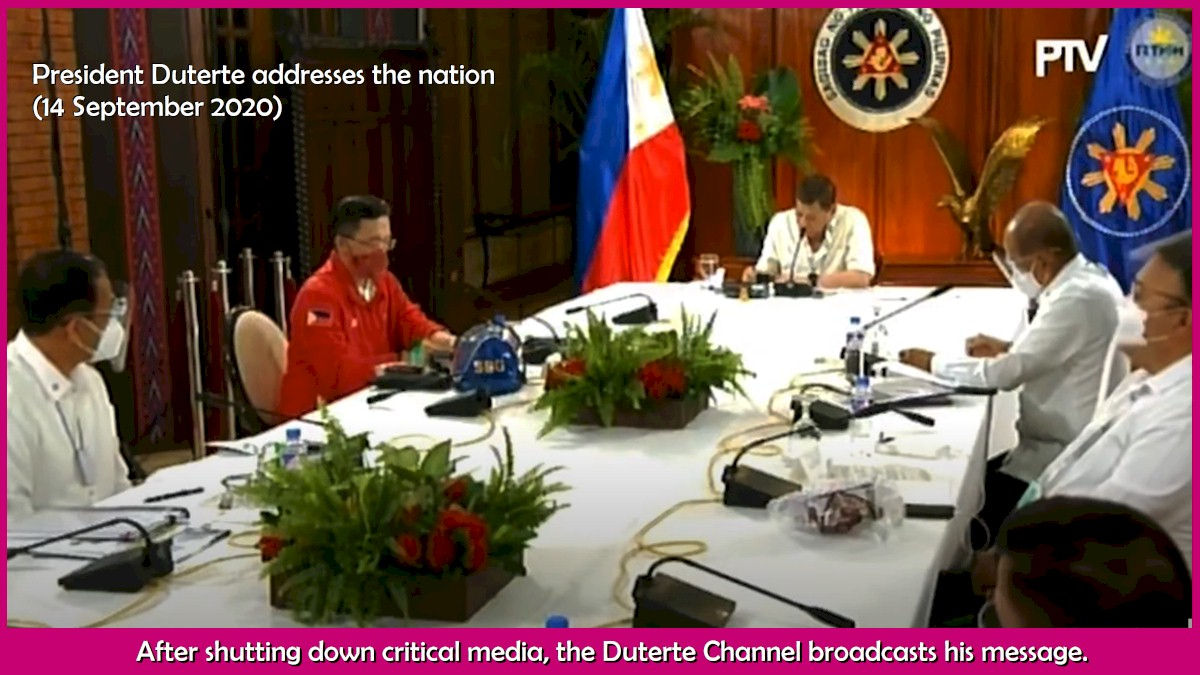 But according to Philippines farmers who communicated via a spokesperson, “the only people to lose if the EU goes through with its threats are the government officials who own huge farming conglomerates and have been murdering members of the public who have tried to establish their own small farmer-owned farming community on Negros Island”.

This would likely refer to roughly one dozen of Zara Alvarez’s Negros Island group who have been murdered. This outspoken woman, a human rights defender, was murdered on 17 August, apparently by the Duterte Death Squad, according to witnesses. This matter is now an international criminal investigation, hence locals are reluctant to comment and the media has left it alone.

“But the murder of Zara Alvarez is the linchpin to unearthing a very sinister crime syndicate run by the Philippines government in Manila. The target is the lucrative, rich farmlands of Negros Occidental,” say sources within the Negros Island Region Farmers,  and the National Federation of Sugar Workers Union, which each have their own private Facebook group.

“The infamous Sagay massacre occurred when a group of gunmen shot and killed nine sugarcane farmers, including four women and two children, while they were eating dinner in a makeshift tent on a farm in Sagay, Negros Occidental on 20 October 2018,” is how the authors of Wikipedia describe one of the events in a sequence of organized killings as government land owners try to control the process of land reform in the Philippines.

The women, children and three men were allegedly members of Negros Federation of Sugar Workers which Duterte has described as “Communists”, blaming them for the nation’s woes. But the truth is that as Forest Gump says, “stupid is what stupid does“.  Farming cooperatives is how collaborations all over the world get produce to market through a refrigerated transportation and warehousing infrastructure that functions cooperatively, meaning all farmers, poor ones and rich ones, big and small, can participate and benefit from the productive national systems.

“Apart from the incipient Negros Occidental cooperative groups, there is no functional infrastructure for the Philippines to get product to market. But absentee owners running near-slavery operations on Negros Occidental detest the local workers who have strived to become part of the ownership of the lands they work and create farming cooperatives that function well for the benefit of all of the Philippines.”

“Several opposition figures condemned the murders and directly blamed Duterte for the act; former Bayan Muna Representative Neri Colmenares said that the Duterte administration and the Armed Forces of the Philippines (AFP) “should be held responsible” for the killing of nine farmers.”

(Duterte has the region under military control.)

Is it possible that the absentee owners, dynasties in Manila, just don’t get it and hence use the government methodology of killing all proponents of change?

“Anakbayan Cebu wrote on Twitter, saying “vehemently condemns the fascist and terrorist acts of the Duterte regime towards the tillers of the land who are constantly victimized by his ferocious all-out war.” The Commission on Human Rights (CHR) also condemned the killings and called on the government “to give assurance that justice would be served for the victims.”

(That has not happened, say the farmers.) 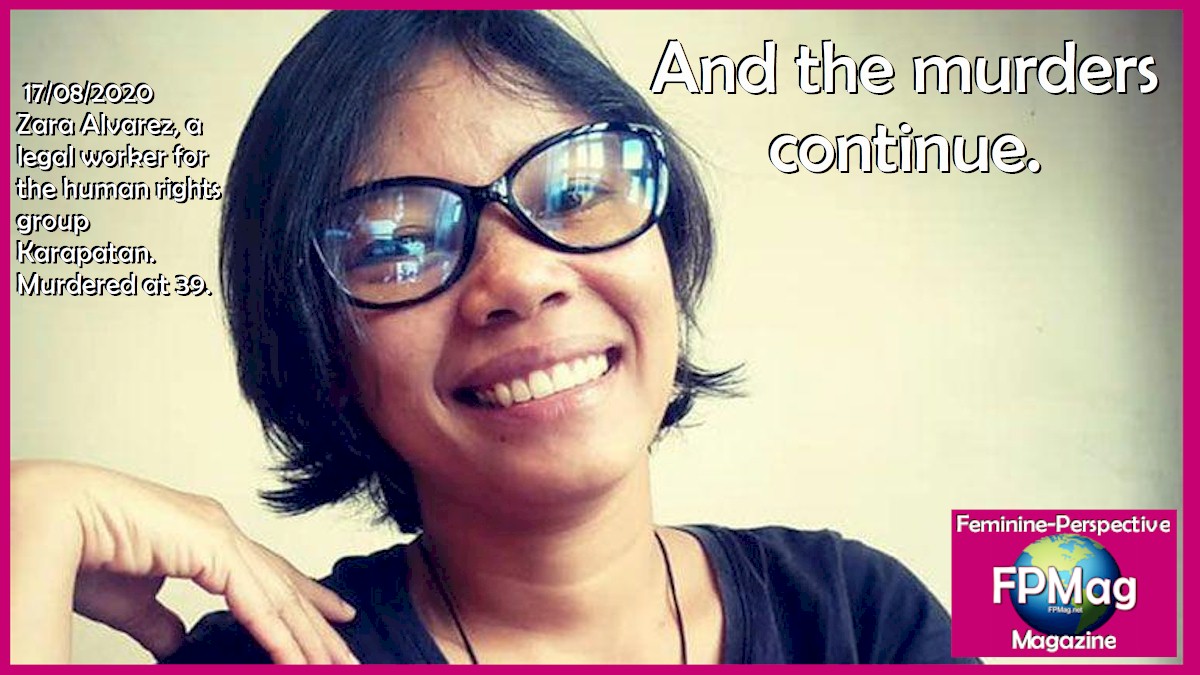 And the murders continue. 17 August 2020, Zara Alvarez, a Negros Island-based Filipino human rights advocate, educator, paralegal and prominent social activist who predominantly campaigned against human rights violations which were witnessed during the administration of Rodrigo Duterte. She was truly much beloved human rights advocate who was gunned down as were others that week. Previous attempts on her life had failed. Roughly one dozen of her Negros Island group have been murdered.  Photo: Twitter.  Art/Cropping/Enhancement: Rosa Yamamoto FPMag

“You killed her,” says Katie Alsop of the RINJ Foundation, in a narrative for a film now being produced to discuss women’s rights in South Asia. And the murders continue.

The Philippines has Fallen, a requiem for precious souls lost to Duterte-style Murders. from The RINJ Foundation on Vimeo.

Yes, this was a calamity. A beautiful young soul, and a ray of hope, lost.

She was truly much beloved human rights advocate who was gunned down as were others that week. Previous attempts on her life had failed. Roughly one dozen of her Negros Island group have been murdered.

The voice of a government that failed its people and helped itself.

About “Harry” Roque, former friend Barry Gutierrez, at University of the Philippines Law School says,  “The greater tragedy in Harry’s case is that he used to be one of the good guys but now he works for a real-life super villain.”

Rodrigo Duterte is the self described murderer, President of the Philippines, who slid into power using the stolen billions of dollars the kleptocratic Marcos Family dynasty gave him in return for substantial favours including a heroes’ burial for convicted felon and former dictator Ferdinand Marcos.

Duterte is the notable leader on the world stage who last month ordered customs officials to shoot and kill anyone importing drugs. Apparently that includes medications too, say some passengers in blogs who describe being presented with bullets or medicine bottles at customs inspection at the Manila Airport where they were shaken down for all their cash in lieu of being jailed for bringing in contraband which they had never seen before. It should be easy now to spot the crooked officials. By deductive reasoning they would be the ones who are not shooting the alleged smugglers, wouldn’t they?

On killing women who revolt in the Philippines

“‘We will not kill you. We will just shoot you in the vagina,’ ” said Duterte. He went on to say that without their vaginas, women would be “useless”.

But Duterte may have broken that promise when he had Zara Alvarez murdered.

In prison is a four-time global Shero, Leila De Lima, outspoken against the Duterte Regime, a Senator and human rights advocate. She is held in prison awaiting trial for being some kind of drug lord without being properly charged in the context of common law and without bail.

On her way to prison for a long time is Maria Resso of Rappler News whom Duterte has vowed he will shutdown.

The Philippines largest and only cross-nation local news network has already been shutdown by Duterte. The only message Filipinos get is the “Duterte Channel”, as some critics describe the national state-controlled propaganda network.

An EU Parliament resolution for which 626 voted in favor, 7 opposed, and 52 abstained, reminded the Philippine government of obligations under the scheme, particularly “with regard to human rights and of the consequences of failure to comply with those obligations.”

Comments from every human rights observation post in the world have been against the Duterte regime and strongly in favour of sanctions against the Philippines.

From America and China there is no word because both countries are vying for access to the Philippines as a surrogate front for war against each other and a way to demonstrate prowess without blowing up each others’ cities. Duterte plays one against the other. In the middle, the people of the Philippines don’t stand a snowball’s chance in hell.

But there is something to think about hard and cold in a dark room.

The people of the Philippines are not nice to each other and most are ‘likely thieves’ say banks and other financial institutes which fight daily against insurmountable frauds and shrinkages using the world’s most aggressive security access tactics.

The Philippines for decades has had one of the highest murder rates in the world, now around 18 per 100k on a population of about 108 million. The murder rate is colossal. So too is the death rate from all causes.

The high murder rates prior to Duterte’s time have now doubled if one counts the tens of thousands of extrajudicial killings by the Duterte regime.

Ironically the Catholic Church, perhaps just a very perverse variant of what the Pope thinks he heads up, is the leading faith in the Philippines.

This version of the Catholic Church has its officials drive Mercedes and other imported luxury cars, sex the children, and violate women’s rights like it’s 999.

A few religious cults have spun away from the Pontiff’s gang of perverts, and they are worse. They suck money from communities and rob children of their childhood virginity, all in the name of God.

Was it the Catholic Church that caused the Philippines to be the worst place in the Universe for incest and child rape?

Members of the flock have been busted many times for recruiting kids for the child sex trade, some of whom are serving long prison sentences and others will too, some day.

The Philippines is not a law and order democracy, it is an oppressed nation that has been in servitude to Spain, America and Japan at one time or another, and now in servitude to its own kleptocratic dynasties that bilk systems they create for all they are worth.

We doubt very much this is the kind of conduct the EU wants to encourage.

By the way, the Philippines government denies everything except the references to the Catholic Church.