Democracy rarely breaks down suddenly. In the case of Venezuela the process began in the late 1980s.  “But from the 1960s through the 1980s, it had a stable two-party democracy and oil-fueled prosperity. Those pillars collapsed in 1989, after oil prices tanked and the country faced a debt crisis,”  writes Kristina Mani, of Oberlin College and Conservatory

“Venezuela is bleeding people today,” says Alma, a humanitarian worker who runs the auxiliary support group at a woman’s shelter somewhere undisclosed in the Amazon Basin of Venezuela. She refers to a mass emigration from Venezuela to anywhere they can reach.

“It is so bad that all the neighbouring countries have closed all the borders surrounding Venezuela. We have been lucky to have some help from Colombia to import medical supplies, much of which has been donated by people in Canada, and some Russians have helped us trek the goods inland. Otherwise everything gets stolen by rogue military people of the Maduro junta,” Alma explained. 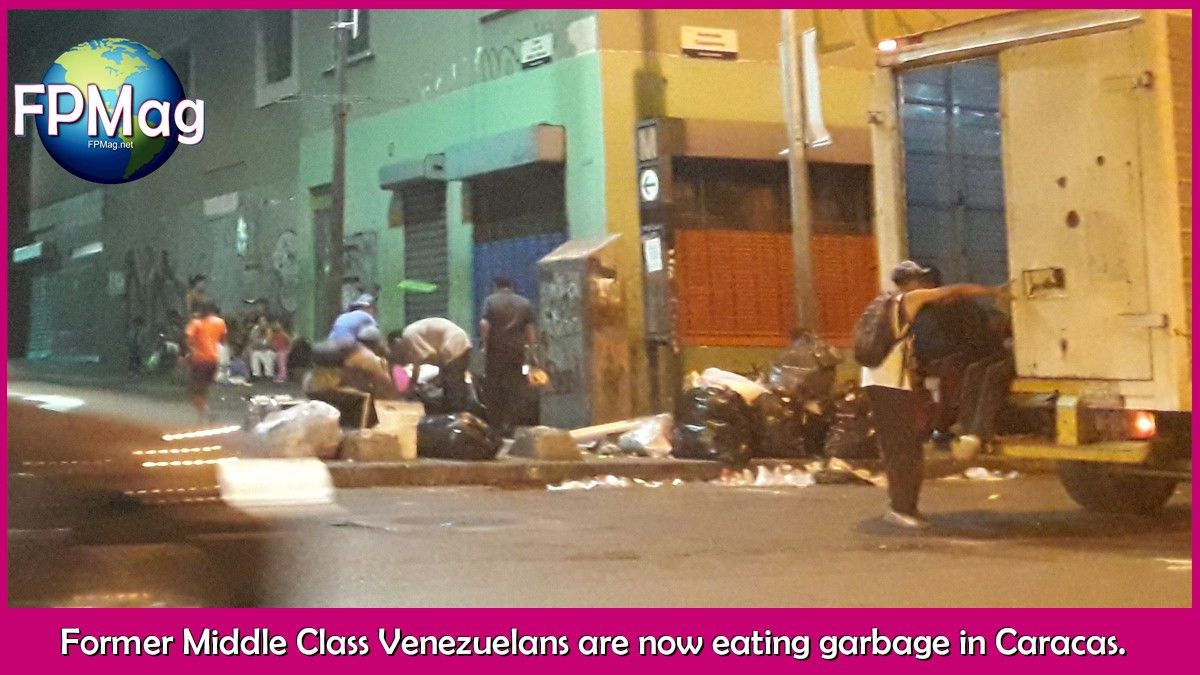 “The humanitarian disaster in South America may be led by Venezuela which through corruption and pilferage drained the population’s wealth like overzealous miners stripping a mine,” says a missionary nurse in Venezuela.

Nicolás Maduro has caused Venezuela to shed millions of starving and poor refugees to scatter to the neighbouring countries.

The United Nations estimated in May 2020, that some “5.1 million Venezuelans fled their homes to seek refuge in neighbouring countries”, Bolivia, Brazil, Chile, Colombia, Ecuador and Peru. 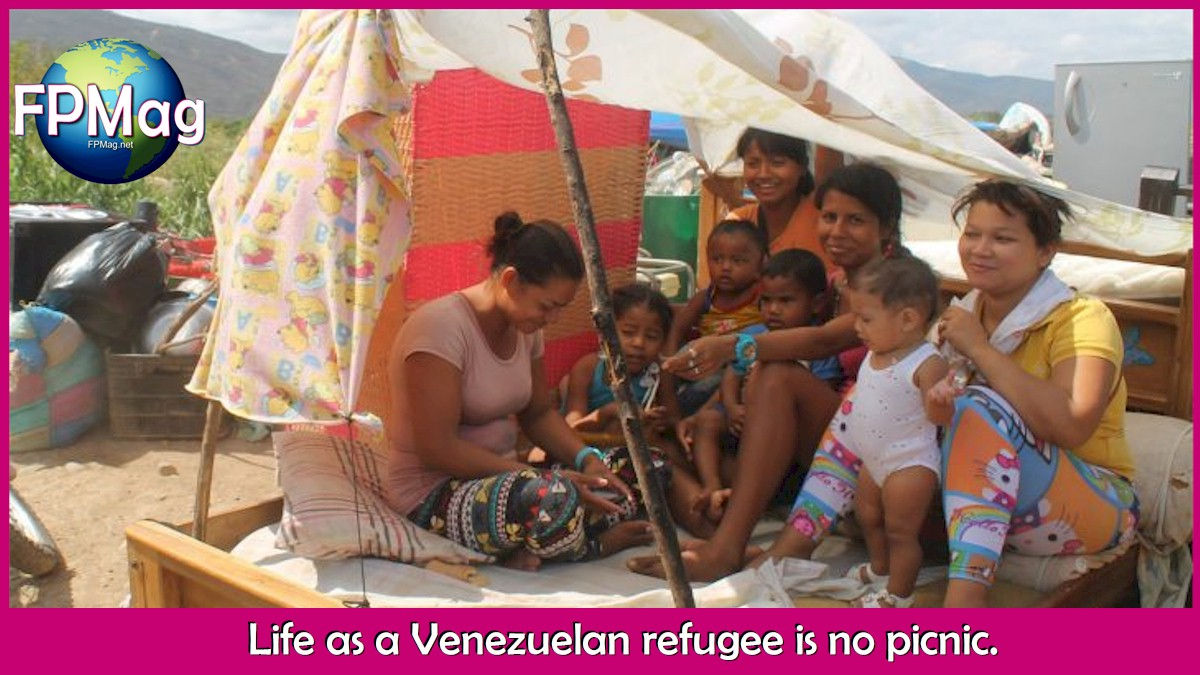 Putting the exodus in context, in September 2018, the UN High Commissioner for Refugees’ regional representative compared the Venezuelan crisis with the migrant and refugee fiasco “caused by the Syrian Civil War”.

“Venezuela’s crime rate is a major cause of emigration. According to sociologist Tomás Páez, Venezuelan parents and grandparents encourage young people to leave the country for their own safety. Venezuela deteriorated under Hugo Chávez, with political instability and violence increasing,” say Wikipedia Authors. 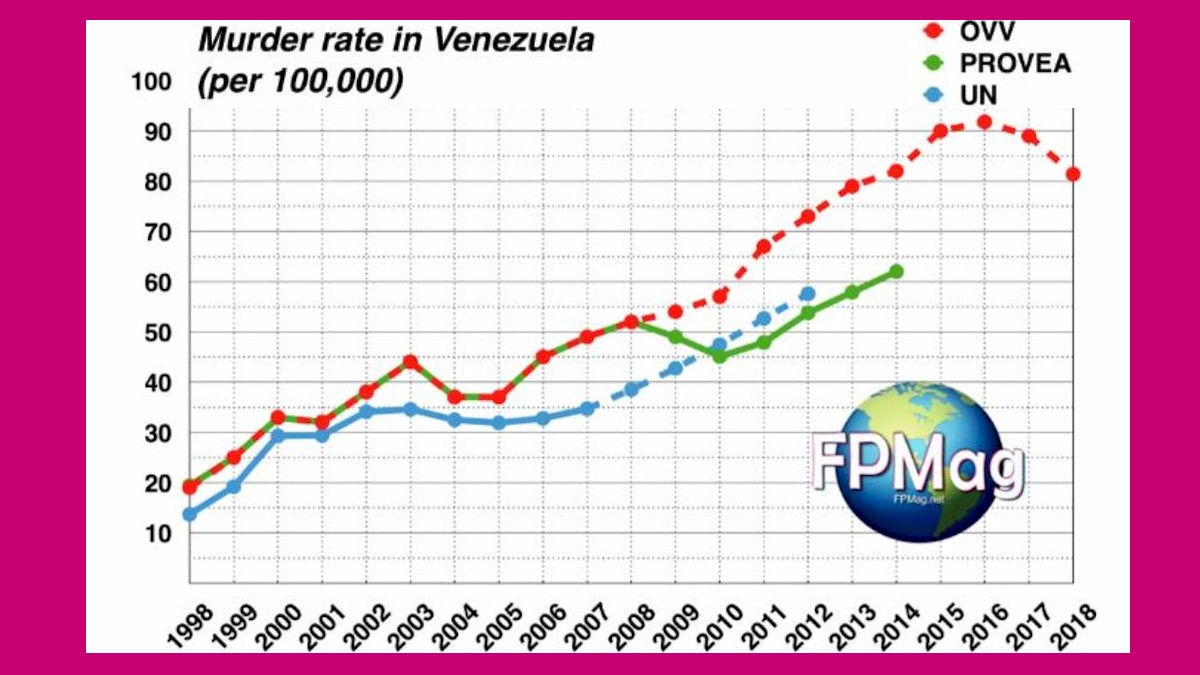 Who are Airan Berry, Luke Denman and Jordan Goudreau?

Was “Operation Gideon” a plot to either kill Venezuela despot  Maduro authorized by the  United States?

It doesn’t matter now, because over a dozen people are in the clutches of the Maduro junta. A close look behind the scene is alarming, because the people involved are being described by sources who should know, as “top drawer”.

“As if the catastrophic leadership problem of the United States on its own, wasn’t enough, Donald Trump, the idol of the QAnon cult has meddled and then lost interest in Venezuela having probably launched one failed drone-assassinating attempt and an attack by a  team of former special operations soldiers, all of whom have been killed or captured by the Nicolás Maduro junta with the help of any of China, Russia, Iran or Cuba offering intelligence data,” explains Simon Baldock, an Israeli security specialist who knows two of the alleged team members.

“Or perhaps indeed it was soldiers of Cuba or Russia who captured the mercenary soldiers on the shores of Venezuela. Some of these men are seen in the Maduro-released images,” explains Mr. Baldock.

Any close look at this situation is worth a cry. The men involved are arguably heroes to their families, people who having served their country and struggled for jobs or contracts thereafter like everyone else in the midst of a wicked pandemic. They took this mercenary assignment from whomever because it was ‘what they do’, and a way to “feed the kids” as one marine explained it to FPMag.

“Trump has abandoned the people of Venezuela and interim President Guaido, and did not back up his fire and fury rhetoric he threw at Madura as he courted Juan Guaido’s young wife in the White House,” says Mr. Baldock. 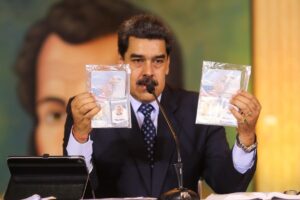 ID of former US soldiers are displayed during a meeting with members of the Armed Forces in Caracas, Venezuela on May 4, 2020. Sentencing of some prisoners took place on 8 August 2020. 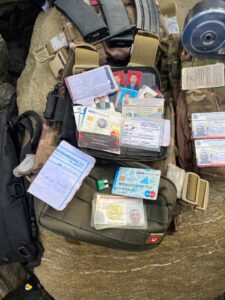 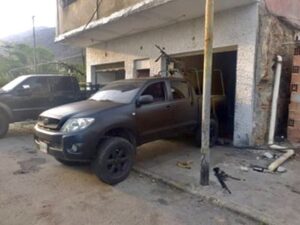 All parties captured have been sentenced to 20 years in prison. Some eleven persons are still awaiting trial for aiding and abetting 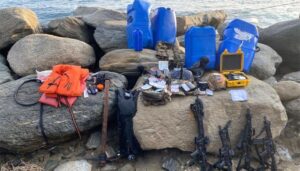 Maritime attack against Venezuela captured on the shore line. 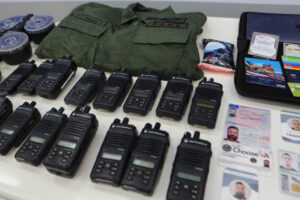 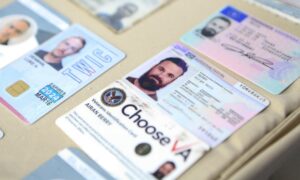 ID of Airan Berry, Luke Denman and Jordan Goudreau and others.

And then there is the CITGO 6, a group of American Businessmen lured into Caracas and jumped by members of the Nicolás Maduro military junta. 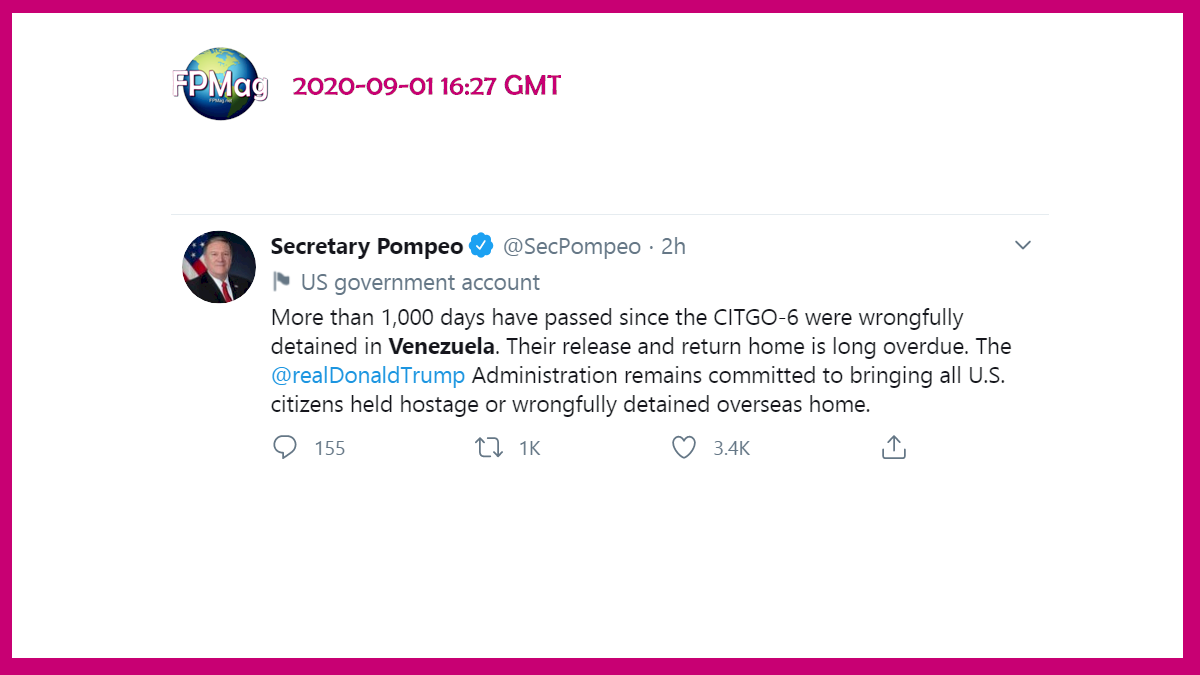 More than 1,000 days have passed since the CITGO-6 were wrongfully detained in Venezuela. Their release and return home is long overdue. The  @realDonaldTrump Administration remains committed to bringing all U.S. citizens held hostage or wrongfully detained overseas home.

Statement of US State Department Regarding CITGO 6 “

1,000 Days of Wrongful Detention in Venezuela”

More than 1,000 days have passed since Tomeu Vadell, José Luis Zambrano, Alirio Zambrano, Jorge Toledo, Gustavo Cardenas and José Pereira — known as the CITGO-6 — were lured to Caracas for business meetings and then detained by masked security agents and thrown into one of Venezuela’s most dangerous prisons. While two of the men have been moved to house arrest and a trial process has begun, both positive developments, the four other men remain in Venezuela’s increasingly dangerous jails where COVID-19 continues to spread and threaten their lives.

The U.S. Government has repeatedly called for the unconditional release of the CITGO-6 and their return to the United States. The families of these six Americans are suffering. It is time for Maduro to put politics aside and let these families be reunited again. No one should doubt the President’s commitment to bringing home all U.S. citizens held hostage or wrongfully detained overseas. Special Presidential Envoy for Hostage Affairs Roger Carstens, Special Representative for Venezuela Elliott Abrams, and I will tirelessly pursue our mission to secure the release of the CITGO-6 and we will do our utmost to achieve that goal. 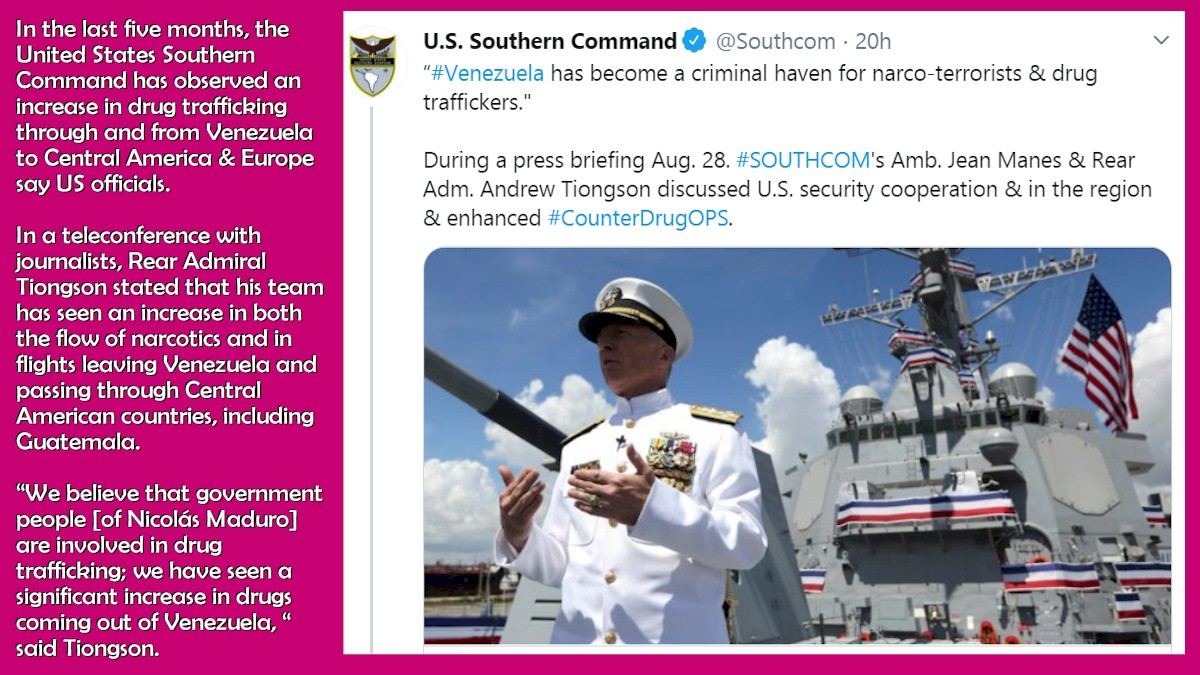 Who is behind the Venezuelan Drug Cartel which is now doing a booming business?

See tweet. In the last five months, the United States Southern Command has observed an increase in drug trafficking through and from Venezuela to Central America & Europe say US officials.

Rear Admiral Tiongson stated today that his team has seen an increase in both the flow of narcotics and in flights leaving Venezuela and passing through Central American countries, including Guatemala.

“We believe that government people of Nicolás Maduro are involved in drug trafficking; we have seen a significant increase in drugs coming out of Venezuela, “ said Tiongson. Art/Cropping/Enhancement: Rosa Yamamoto FPMag

“#Venezuela has become a criminal haven for narco-terrorists & drug traffickers.”

Every fact coming from the Venezuelan government when FPMag attempts to verify by other means, fails. Readers are warned that he data set out below are that which the Maduro junta reports.

There is a completely different story coming from the Juan Guaido official government in exile in-country.

That sounds bizarre but the constitution of the country sets out that the majority in the General Assembly (akin to a parliament) upon acknowledging a controverted election as was the case in 2018, could and should appoint an interim President which it did (Juan Guaido). Read if you wish: Venezuelan President is now Juan Guaido, a nice guy.

Venezuela exists under a military junta led by a civilian bus driver from Caracas named Nicholas Maduro who is basically a puppet for a major South American drug cartel that is run mainly by the Venezuelan military and some international criminals.

Legislator Jose Manuel Olivares elected to the National Assembly, and on the Juan Guaido pandemic advisory team (also in exile in-country), told an online media conference that authorities conduct just 600 to 800 tests a day and the results are delivered up to two weeks later.

FPMag brought the matter up with the Civil Society COVID-19 Tracking group led by Dr. Fred Harris and the response was pretty much the same as what Mr. Olivares was indicating, but Harris put the situation in a more global context.

“They test the people who are gasping for breath at the over-wrought emergency departments of Caracas hospitals. As far as we know the numbers you see are for Caracas only. There are at least one thousand cases per day reported and only half are tested. Some cases are obviously COVID-19 determined by reading ground glass opacities on radiological reports so no test is needed. Most of those persons admitted who are vented (intubated for ventilators] will die,” says Harris. “Something like 85%,” he added.

“The numbers the government publishes are invented nonsense, achieved by adding a few more numbers each day in each column. Some peole have told us they come directly from the Office of Nicholas Maduro, meaning Maduro’s junta people. From all appearances, nothing else makes sense as an explanation of what we are seeing. We have some good medical and scientific connections in Venezuela, awesome people who really know what they are doing, and when we ask specifically about the government data they say they “don’t know what the hell they are talking about,”  adds Harris.

“I am not going to say that ‘Venezuela has the only government publishing data that is pure drivel’, because that simply is untrue, but it is one of those we do not waste any time doing more detailed analysis because always at first glance it appears to be bunk. Maybe Venezuela is an anomaly of South America but according to medical people we talk to in the country, the pandemic is a nightmare and not the lowest CFR/IFR in the world as the military government would have us all believe,”  says Harris.

Reaching out to the Guaido exiled-in-country ‘opposition’, a spokeswoman for Guaido nodded emphatically and said, “yes yes, yes, agree what that doctor is saying [translated].”

“We are reaching the point that the number of daily cases is going to be greater than the testing capacity. That is going to produce an artificial flattening” of the contagion curve, Olivares said.

The result has been more complacency.