Duterte pardon of US Marine Pemberton must be reversed.

“Treason” is the word that is being used in the more quiet chats on social media. They say, ‘Duterte just indicated that he sees no value to the lives of Filipinos’.

“The other evidence against Duterte that nobody wanted to believe is now clear,” says one netizen who says she saw the documentary about the case, “Call her Ganda“.

Jennifer Laude’s death occurred on October 11, 2014, in Olongapo, Philippines, when the 26-year-old Filipino woman was killed by 19-year-old US Marine Private First Class Joseph Scott Pemberton whom Duterte said he has pardoned for the killing.

At one point in 2018, the Philippines government admitted policy to set out that it was OK to kill a certain class of Filipinos. It certainly has done that. That was the Justice Minister. Vitaliano Aguirre who calls drug addicts, ‘not-humanity’ and says it is therefore ‘OK’ to kill  them.

Amnesty International in 2018 accused Philippines police of murdering defenceless people or paying others to kill them as part of President Rodrigo Duterte’s drug war. Amnesty said the deaths may amount to crimes against humanity.

The Duterte government has been consistent. It says it will murder people it does not like or people who speak out against the government. Fear, division and kleptocracy govern the Philippines and every now and again a bold slip-up says all that and more.

“Duterte is guilty of treason. His greed led him and his band of spineless henchmen including Harry Roque [who is Duterte’s spokesperson and the alleged lawyer for the Laude family], to double deal two sides that led to the selling out of the Philippines people and the entire nation of the Philippines,” added another.

But there is endless vitriol on Twitter and Facebook that condemns relationships with America and China. Clearly, Filipinos are angry because the risk they take for being critical of Duterte is a violent death or imprisonment.

“Joseph Scott Pemberton killed a Filipino“ say witnesses but a court ruled it was a homicide mitigated by the killer’s disappointment on learning the girl he picked up at a bar was transgender. The Court blamed the victim for not revealing her sex change.

Is a Filipino Life Worth Less? Mr. Duterte must backtrack his pardon of the American Marine who took Jennifer Laude’s life. She was a pretty Filipino, loved dearly by her family and friends. She was a second class human as a Filipino? Are all Filipinos second class? Well, according to documents filed with the International Criminal Court, Duterte and many accomplices kill their countrymen from all walks of life. 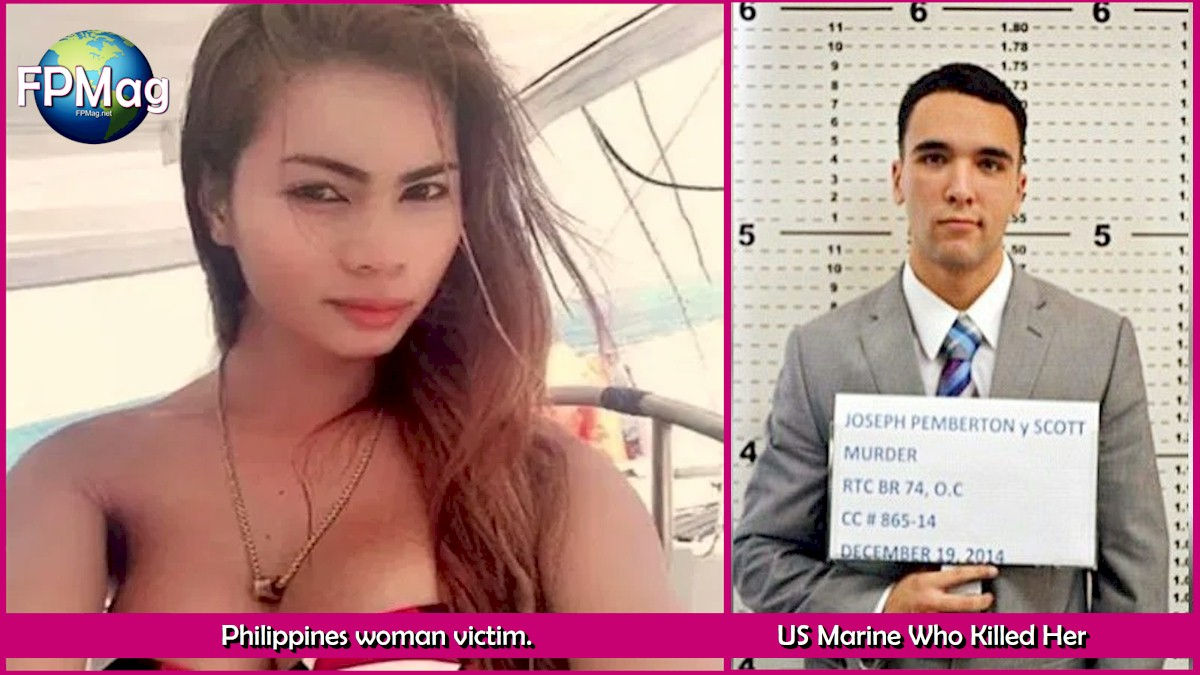 For some reason, Duterte has given the Americans free-reign and unrestricted access in the Philippines over five Philippines-owned military bases so that the Americans can set up fire control operations for launching missiles at the Chinese. (Already the American “G”-strain of the SARS-CoV-2 has been popping up here, there and everywhere in the Philippines archipelago despite passenger planes being grounded for months since March 2020.)

Needless to say, the Chinese are not likely to hold back hence both countries will decimate the Philippines, fighting a war that will never reach each other’s shores.

In many ways, greedy hands and pockets in Manila are being fed by both sides, the Chinese and the Americans

There isn’t much that’s good about a government that has racked up some 35,000 extrajudicial killings and snuffs out the lives of those of  its journalists, civil rights activists, and critics it doesn’t like

The Philippines government randomly murders those Filipinos whose neighbors report as having a limp, a lisp, a stutter or a stagger. They kill them as alleged drug users on a list from local barangays or police offices despite their being sober, healthy physically challenged persons.

From cold hard experience I can say that reprehensible maggots like the Islamic State murderers who have terrorized many countries including the Philippines, murdering Canadians and Filipinos, are reputedly the ones that most people acknowledge devalue human life.

So which is the worst group of terrorists, the Philippines government of Rodrigo Duterte which is renown for murder and all sorts of human rights abuses, or the scumbags who followed Isnilon Hapilon?

Let’s face it, what Duterte has done in giving Pemberton a pardon has indicated fourfold disasters that everyone likely knew but few ever spoke of.

Americans do not value the lives of Filipinos either

In fact the Americans do not value the lives of anyone from Asia. 2020 Started out with the mass murder of a dozen Iraqi and Iranian officials in Baghdad.

It’s no secret that American soldiers under the Visiting Forces Agreement (VFA) kill Filipinos. That’s only happened twice recently but the number of angry moms and dads who have been left with pregnant little girls might like to even the score. The Americans must leave the Philippines forever. Filippinos need to be left alone to recover from PTSD and the Stockholm syndrome. Some twenty years ago they threw the Americans out for their crimes against the people, but somehow, they are back and it starts all over again.

So in this environment Rodrigo Duterte whose murderous psychopathy is renown because he brags about his sloth, wants to pardon a yank who murdered a Filipino.

No amount of digging turns up any mitigating factor in the murder of Jennifer Laude by US Marine Lance Corporal Joseph Scott Pemberton (then 19).  This is an old story so be sure that there has been plenty of digging and hundreds of opinions heard.

Duterte says he will pardon the murderer of yet another Filipino. Few disagree that makes Duterte a traitor. He must be kidding.

Pemberton had met Ms. Laude at a place that is known as the Ambyanz disco bar in Olongapo on the evening of 11 October 2014.

Jennifer Laude was reportedly a sex worker at the time. Pembertion and Laude had apparently agreed to leave the bar and go to the Celzone Lodge, a nearby motel.

Half an hour after checking in, Pemberton fled the motel quickly, leaving the motel room  door ajar.

Spotting this, and after observing no other person than Pemberton alone leaving the room, the motel staff investigated.

Through the open door Jennifer Laude (26) was found  by motel staff in the bathroom of her motel room at the Celzone Lodge. Laude’s naked body, was observed partially covered from the waist down, with her neck covered in strangulation marks and her head forced into a toilet bowl at an awkward angle according to evidence heard at trial.

Forensic experts from the U.S. Army Criminal Investigation Laboratory reported that they had detected that a condom wrapper recovered from the motel room had Pemberton’s fingerprints on the surfaces.

The VFA, the 2014  Enhanced Defense Cooperation Agreement and the Balikatan exercises must come to an end. But so too must the uncaring corrupt government in Manila. There is no light in the forest.

The Vice President, Leni Robredo occasionally says something worthwhile but it is a whisper. She has no following and can’t fight her way out of a wet paper bag, let alone take on the several corrupt dynasties that own the Philippines government like a fiefdom, including President Rodrigo Duterte who fronts the Ferdinand Marcos family and its purloined billions.

Is there any hope for the Philippines?

Not likely. Unless the Philippines is eventually taken over by China, it will fail as a self-governed state once its corrupt government in Manila has mined the population’s wealth to the point of total starvation. It is very close. The situation is desperate and that is why Americans get away with raping Filipino children and killing Filipinos.

You don’t need to like that conclusion but it is no less true for being disliked. The Philippines is heading into a runaway slaughter by the SARS-CoV-2 pandemic virus because money the people thought they paid for healthcare found its way into corrupted government lackey pockets. And the best pandemic management the government has to offer is shoot people for not wearing a mask. Filipinos die at home because they know that even if they had a nearby hospital it would be more dangerous than being alone at home with COVID-19. Hundreds of readers have written about that.

The pardoning of Pemberton for killing a Filipino fits into the kaleidoscope of Duterte’s incomprehensive lack of empathy and complete lack of competence in running anything. Everything Duterte has touched has reeked of malfeasance and drawn to itself a plethora of personality disordered swine that willingly obey as sycophants all the while feeding from the bling that is flung into the troughs to keep them won over.

Those who focus on the pardoning of Pemberton seem to overlook the most horrid abuses of the world. Our home country Canada is no exception for its ignoring its tons of rotting diapers and other garbage left in the Manila harbor rotting away. Shame on the world and shame on the Philippines for marginalizing Filipinos to this lowest and most heinous bottomless pit.

The article " Duterte pardon of US Marine Pemberton must be reversed. " was written by Author: Katie Alsop (Biography, Email) Staff Writer Feminine Perspective. FPMag correspondent for the Middle East and Europe.
Contact Katie Alsop on Twitter ~ Facebook ~ Find on YouTube