A COVID-19 reveal: EU is leader of the free world. Editorial.

The United States is no longer a leader of the free world. Having isolated itself from the world, America is now killing itself with an ill-advised attempt at achieving herd-immunity from COVID-19.

Europe has taken the leadership role with the help of China and to some extent, Russia although Russia has plummeted in its global standing with yet another Russian-made military nerve toxin poisoning. This time it’s not a traitor, it’s inexcusably an innocent, white-hat, opposition critic.

That leaves China and Europe

But China has slipped toward the American bully tactics in the South China Sea and nobody likes how China has overreacted to ISIS trying to influence its Muslim population. It would have been better to prosecute a few terrorists rather than seize away the rights of twelve million humans which China has done. There is an enormous paradox in China’s communist party being just plain stupid (xenophobic, Islamophobic or generally paranoid blind)  in a country of brilliant people.

The “Nine-Dash-Line” and the violation of human rights of the population of Uyghurs within the Xinjiang region is a trust disqualification. Disingenuous logic is not a bid for global trust no matter how many rooftops the story is bleated from.

If it’s a matter of feeding 1.4 billion Chinese with fruit de mers, grow more rice and vegetables instead of trying to horde and pollute huge chunks of the oceans. Mankind needs to become vegan or a gloomy future is not hard to see. Invent something as a fix, don’t steal anything.

Like America lost trust, the people of the “free world” cannot trust a China that violates international law and trashes human rights for millions of people.

While China has stepped up to the challenge of global solidarity fighting the SARS-CoV-2 virus and really stepping up on climate-change mitigation, the two fractures in trust are unhealed. China’s goals for building trust must certainly lie within these two errors in judgment being breaches of international law. How can the world trust that type of thinking?

A multi-dimensional construct to assess the sophistication of leadership styles around the world has already yielded an outcome that points to women-led nations and a small few male-led countries like South Korea, Singapore, France, Canada and a few others.

When comparing the success and failures of 30 women-led nations as compared to countries led by Donald Trump, Jair Bolsonaro, Narendra Modi, Rodrigo Duterte, Nicholas Maduro, etceteras, the differences are like light and total darkness.

Pandemic Crisis Management has been a litmus test of leadership ability.

From all appearances the Americans have defaulted to a “let-it-ride” policy which basically means doing nothing and letting SARS-CoV-2 run its course, infecting as many people as it can, and mentally rolling the dice to see who dies.

Currently the COVID-19 deaths seem to comprise the elderly American males, African-Americans, and any American with significant underlying comorbid health conditions like obesity, diabetes, cardio-vascular disease, asthma, COPD, and many others in no particular order.

Since America is the epicenter of SARS-CoV-2 infections, having one third of the world’s active cases today, the Civil Society COVID-19 Solidarity Project focusses on studying the epicenter and observing the distribution of the most common genome sequences of the virus in America; and what the virus does.

COVID-19 has now killed more people in the world in 8 months than did the HIV virus in all of 2019. By the end of the first month next spring the American deaths will have climbed to one million and the global coronavirus deaths will have reached nearly two million.

That ratio is because outside America, the global population’s behaviour has been strongly favouring recommended mitigation steps including mask wearing, social distancing and hand hygiene after both mandatory and voluntary lock downs have been lifted.

Inside America, there is not sufficient mitigation effort to stop the massive community spread that is taking place in continental United States. Daily new cases range from 40 to 60 thousand.

For America the rate of COVID-19 change will soon accelerate

Most pandemic computer models indicate something like 8 million Covid-19  deaths in America over the next four years  if the current Administration continues on it’s current path of discouraging mitigation efforts. Models are only an educated guess that far out in time but a useful guideline for choosing different policies. In the United States, there is no solidarity nor any policy, but something that looks like it is close to civil war. 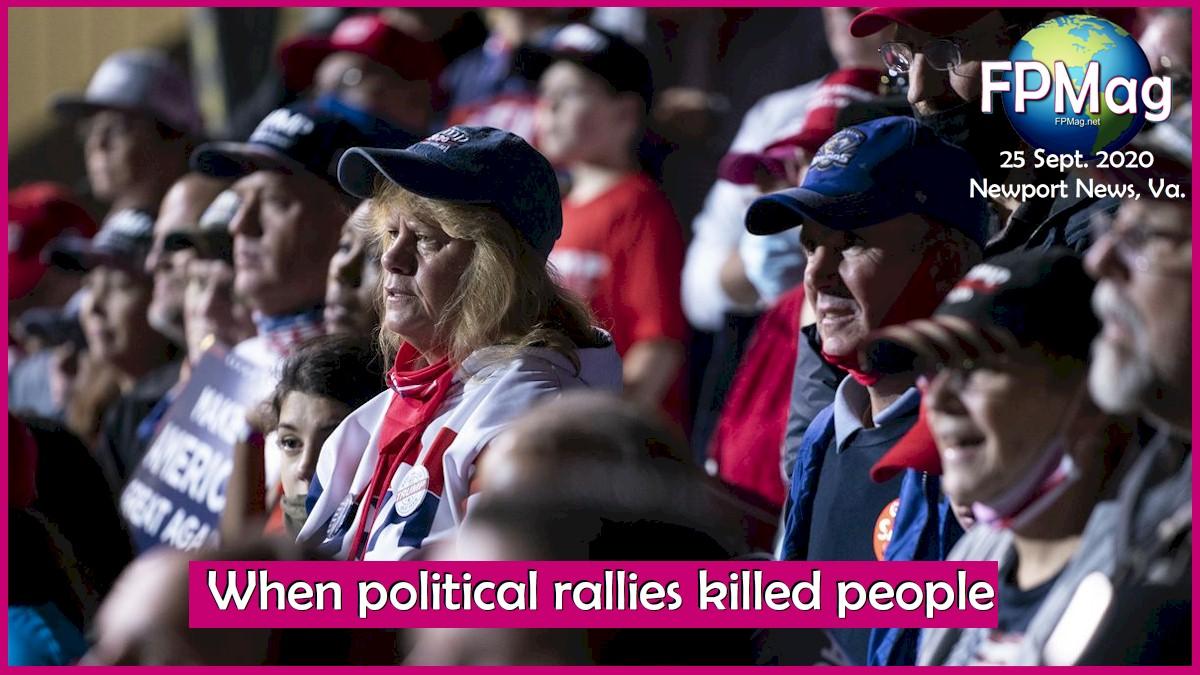 Trump Rally Newport News on Friday. Most Americans at these rallies do not wear masks. They put themselves at grave risk as cumulative infections in the USA exceeds 7 million confirmed diagnosed infections. Photo Credit: Evan Vucci of the Dallas Morning News. Art/Cropping/Enhancement: Rosa Yamamoto FPMag 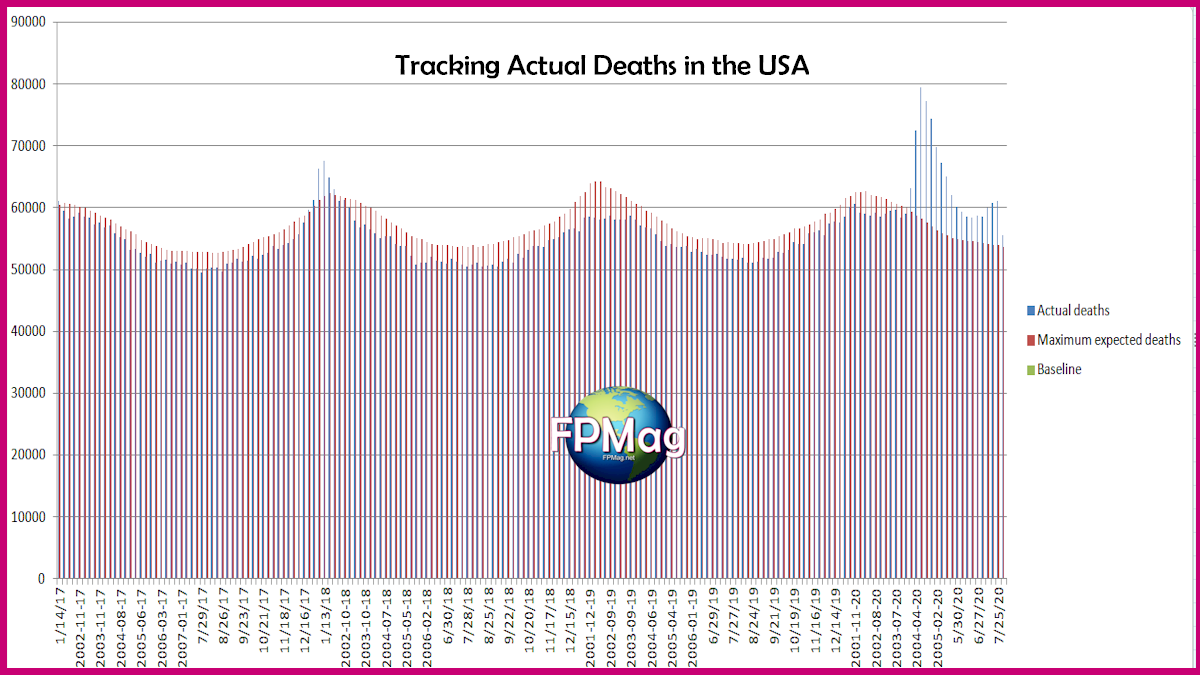 Using data from the Centers for Disease Control, the Civil Society COVID-19 Solidarity Project has calculated for the United States that in the average month the deaths in the United States are underreported. Actual deaths are on average 138% of the reported statistics in 2020 thus far. 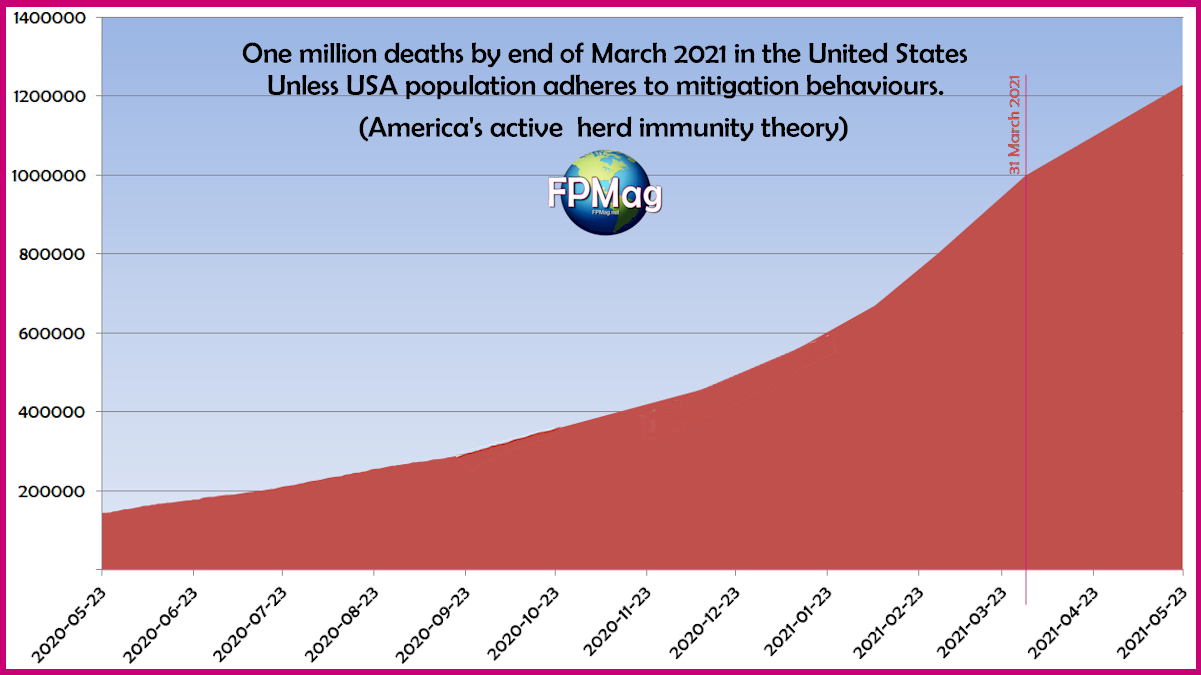 This graph indicates some of what the US White House models indicate, for example that COPVID-19 deaths in the USA will reach some 400,000 by Christmas. Mr. Trump has repeatedly indicated for the USA a “Herd Immunity” strategy that includes taking no national mitigation steps against the COVID-19 Pandemic and allowing infections to reach 60 to 70%. Graph: Civil Society COVID-19 Solidarity Project

There is little point in wasting time arguing that some of these cases of COVID-19 would have died regardless of their COVID-19 disease. Understanding how the virus works is improving in the scientific community. It is now well known that SARS2 kills but over the long term, it may be worse than what is known today. 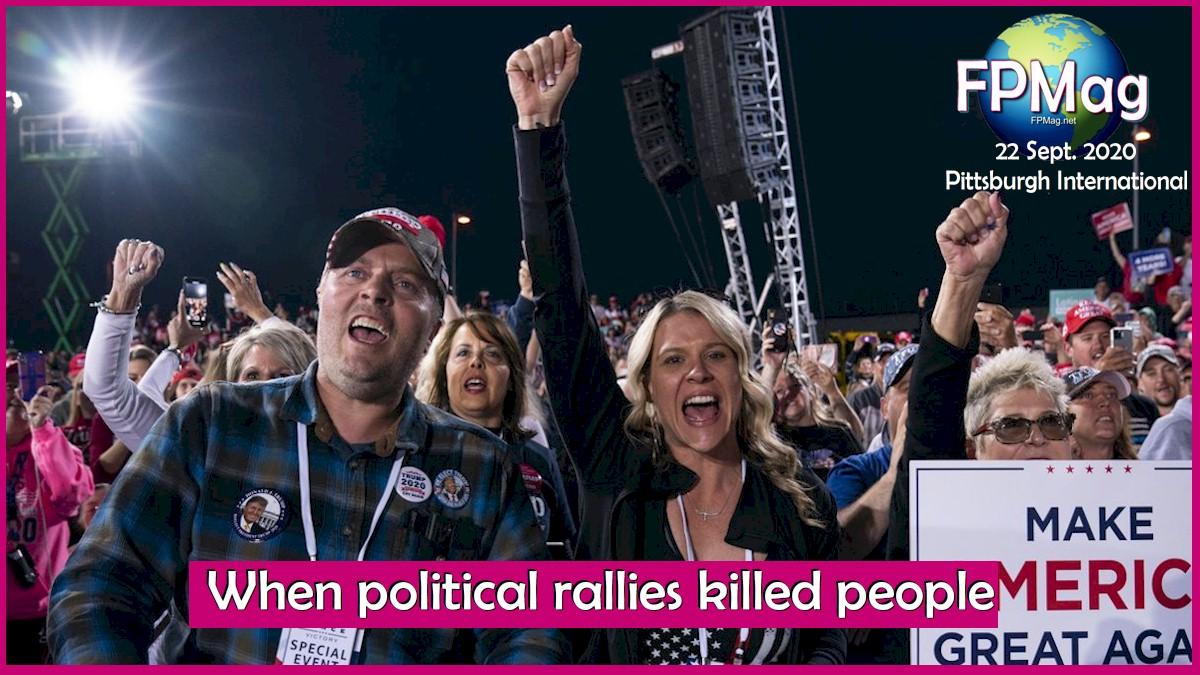 Reports the Philadelphia Inquirer, “Gov. Tom Wolf on Friday asked President Donald Trump to cancel a campaign rally planned for Saturday outside Harrisburg, citing the president’s violation of state public health guidelines at previous campaign events and urging him not to expose Pennsylvanians to the coronavirus “by holding unsafe rallies.”
“To hold this event is not just misguided, it is dangerous, it is manipulative, and it is wrong,” Wolf said Friday in a statement. “I would ask Pennsylvanians to think of the health and safety of their families and their communities before attending this event or any rally put on by the Trump campaign. And I would ask the president, for once, to put the health of his constituents ahead of his own political fortunes,” reported the Philadelphia Inquirer. Photo Credit: Evan Vucci / AP — Art/Cropping/Enhancement: Rosa Yamamoto FPMag

The long term impact of COVID-19 on single ‘recovered’ patients is now a worry.

Cell damage among allegedly recovered patients is significant and prolific within patients’ organs, particularly those organs having cells with the ACE2 receptors.

Arguably, SARS-CoV-2 is not just a respiratory virus, it is a pathogen that attacks human organs after entering the respiratory system.

Having spent years working on the HIV campaign to achieve treatments and vaccine, the medical scientific community is beginning to wonder if COVID-19 is a bigger killer than currently predicted.

Too many patients are having long-term impacts not unlike HIV patients. We don’t even know if like HIV, the SARS2 virus can exist in our bodies at undetectable levels until antibodies and T-cell resistance depletes. That happens with the HIV virus when anti-retrovirus medications stop working or the patient stops taking them.

“Do not underestimate SARS2” say the experts

These foregoing considerations suggest that a new global leadership needs to:

These eight mandates suite the European Union very well. Europe can lead the human race to a better future than what lies ahead theretofore.