Will the world now pay attention to the holocaust America, Britain, Saudi Arabia and others created against 16+ million Yemenis?

What happened to Aramco? “Millions of Yemeni have had enough of your bombings”, says a group of Yemenis in a Sana’a hospital. 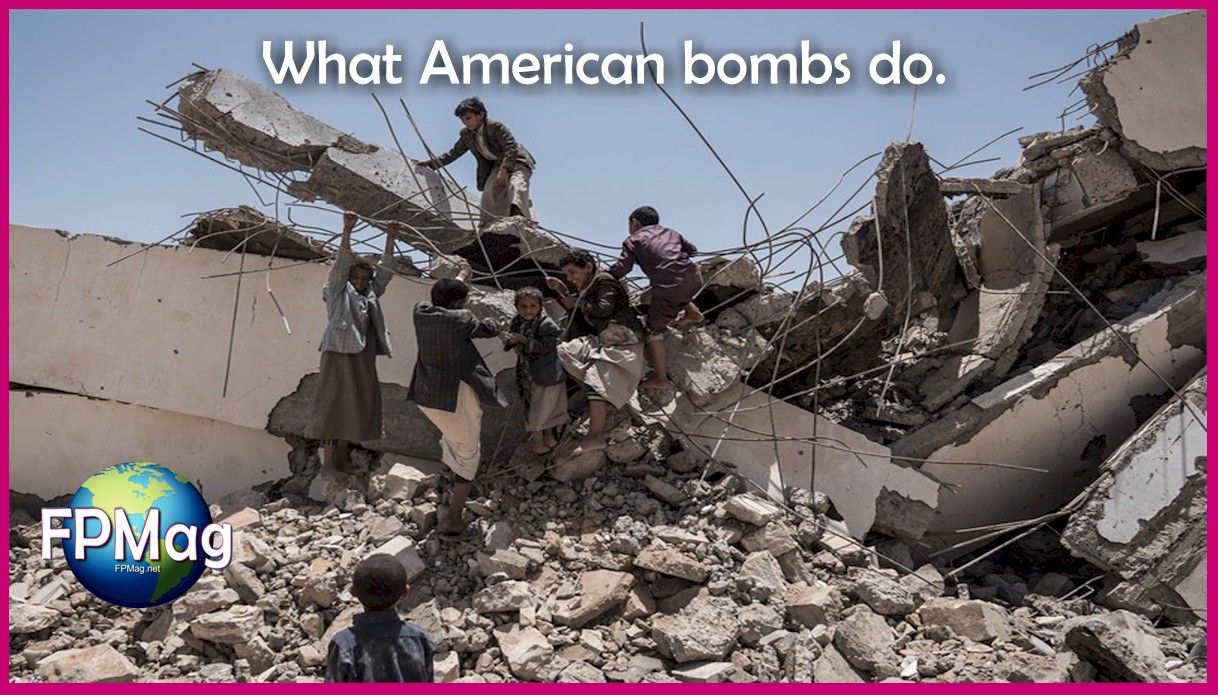 “Houthis for the umpteenth time went to Tehran and complained again: “You are not selling us the good weapons. Now our country is bombed back into the dark ages and our people are forced to live eating the locust nymphs that came looking for vegetation growing from the ground fertilized by our peoples’ dead bodies.” (Yes, they talk like that at times as if it is a thousand years ago.)

“Teheran said go to grids x and y and meet with certain people. They will teach you  weapons and systems and see if you can learn how to do this. But while the teaching required to accomplish the work of being a video-game player was there, these skills must be developed.” (Paraphrased from Yemen gossip.)

That’s how the story goes in local Sana’a folklore, already. It’s only the local scuttlebutt. There is no reliable source that can be confirmed. Everyone from teens to keen adults say they know what happened. They are glad. They seem no more fearful than ever. They always live in fear. 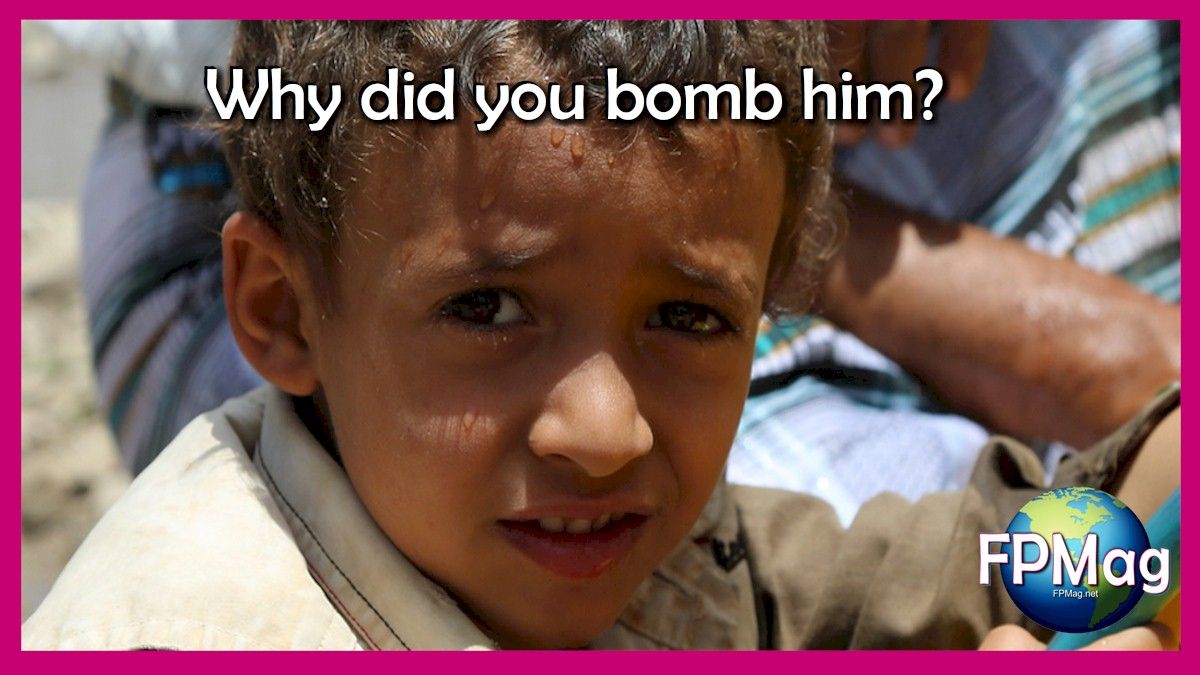 Two sources close to the matter told Reuters news agency on the weekend after the Saturday morning attack that 5 million barrels a day of crude production had been impacted – close to half of the kingdom’s output or 5 percent of global oil supply.

According to the National Academies of Science, Engineering and Medicine,  “The United States gets 81% of its total energy from oil, coal, and natural gas, all of which are fossil fuels.”

That might explain the whimpering sounds coming from the Trump administration which with its oil mogul buddies has America pinned by its tail to oil barrels the moguls profit from. They profit and the world chokes on climate change while lamenting the vanishing clean air.

More importantly, Donald Trump has a problem getting re-elected if gasoline prices at the pumps in the United States are sky high. That is not likely to happen as the USA switches in most States to winter gas which is cheaper.

Some local media across the USA is reporting price increases already.

America is the Major Player in the war against Yemen

What did Yemen do? It’s people years ago took to the streets to protest human rights abuses of the American puppet government. The people then forced a couple of successive bad American-puppet governments to resign and flee to Saudi and New York City.

The Houthi (a family dynasty of sorts) rebels began to move into power as the country splintered and various extremist groups tried to get a foothold including America’s various mercenaries and special forces teams. Messy is an understatement.

America repeatedly says it is not involved in Yemen despite its mercenary troops paid from the public coffers on the ground in the middle of Yemen. Add to that the American depleted or unexploded ordnance all over the country and its Navy blockading food and medicines from reaching Yemenis.

Anyone with a clear mind who visits Yemen during these times since March 2015 has come away with the conclusion that America and Britain are war criminals in this mess. Add Sudan, Saudi Arabia, United Arab Emirates and others to the list. But the leader is America.

Civil Society is quite determined to find Justice for Yemenis

Unequivocally Donald Trump has personally commit serious war crimes in Yemen. That is an accusation that The RINJ Foundation a global civil society NGO says it is prepared to back up to the International Criminal Court (ICC) on the basis of documented evidence including the 9 August 2018 bombing of a School bus full of children. That process however may take a decade because of the complexities involved in tying the United States, a non-member, to actions committed by members and signatories of the Rome Statute which spells out most of these crimes.

The ICC has been banned from entering the United States because of Trump’s fear of prosecution. Once Trump is no longer President, it is possible that an information could be brought to a willing federal prosecutor within the United States and let America take care of its own problems. The referenced crimes are also crimes in America. That is more likely to happen based on legal discussions over the past year since 9 August 2018.

RINJ in August 2018 demanded of Saudi Arabia and the United Arab Emirates that they surrender the names and details of the perpetrators. The governments didn’t but a number of women close to the infrastructure did come forward. American personnel knew of this and later insisted that it was an OK target.

“To the best of our knowledge,” says Katie alsop of RINJ, “Mohammed bin Salman did compensate the victim’s families and additionally contributed a substantial sum of money to humanitarian food and medicine support for ordinary Yemeni civilians.”

This was later verified by UN sources. It might be the paradox of our time. Certainly it is a mitigating factor if not actually exculpatory on the Saudi leader. It is more likely exculpatory. This fact plus other considerable volumes of evidence implies that the attack on the school bus is entirely the fault of the Americans. A court should decide that and apportion blame if apportioning is a must. But somebody must do prison time for killing those dozens of innocent children and devastating their families and their community–plus the humanitarians that cared for them.  Even doctors previously numbed by their experience in Yemen came away from the bus bombing as wreckage. 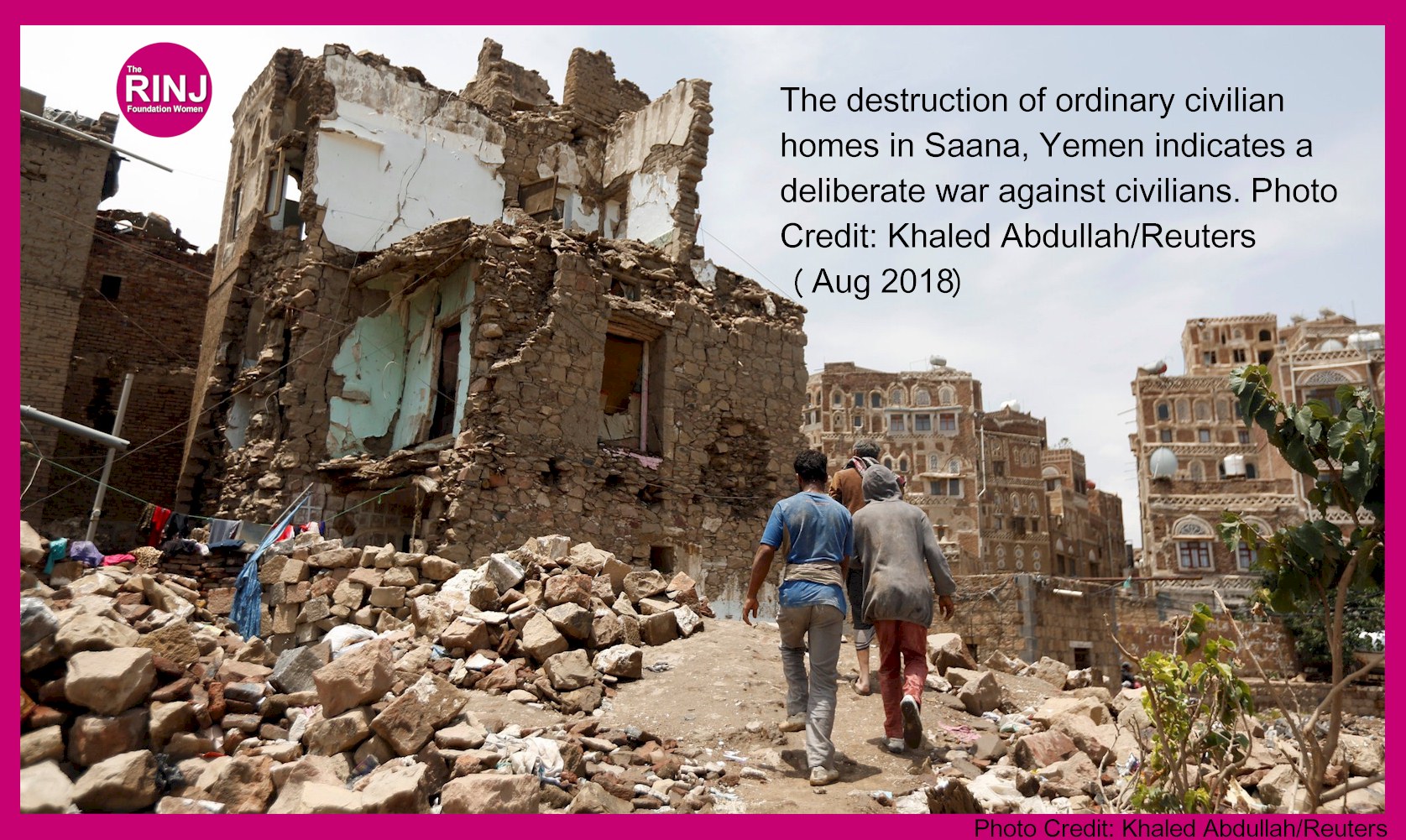 FROM: 9 August 2018 Bombing of a School Bus in Dahyan Market that Killed Dozens of Young Children 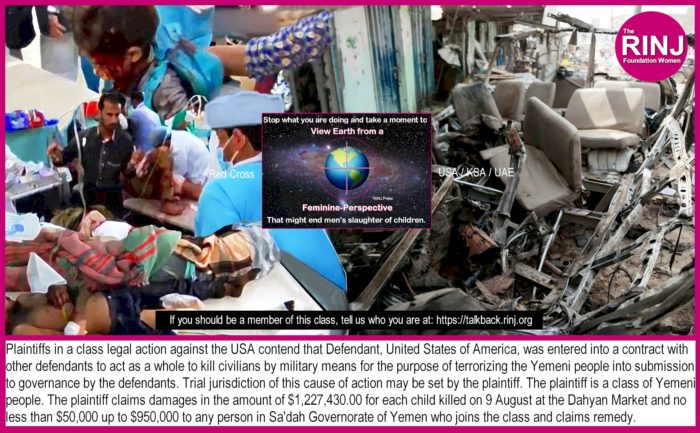 The original announcement a year ago.

Plaintiffs in a class legal action pending against the USA contend that Defendant, the United States of America, was entered into a contract with other defendants to act as a whole to kill civilians by military means for the purpose of terrorizing the Yemeni people into submission to governance by the defendants. Trial jurisdiction of this cause of action may be set by the plaintiff. The plaintiff is a class of Yemeni people. The plaintiff claims damages in the amount of $1,227,430.00 for each child killed on 9 August at the Dahyan Market and no less than $50k up to $950k to any person in Sa’dah Governorate of Yemen who joins the class and claims a remedy.
If you should be a member of this class, tell us who you are at: https://talkback.rinj.org 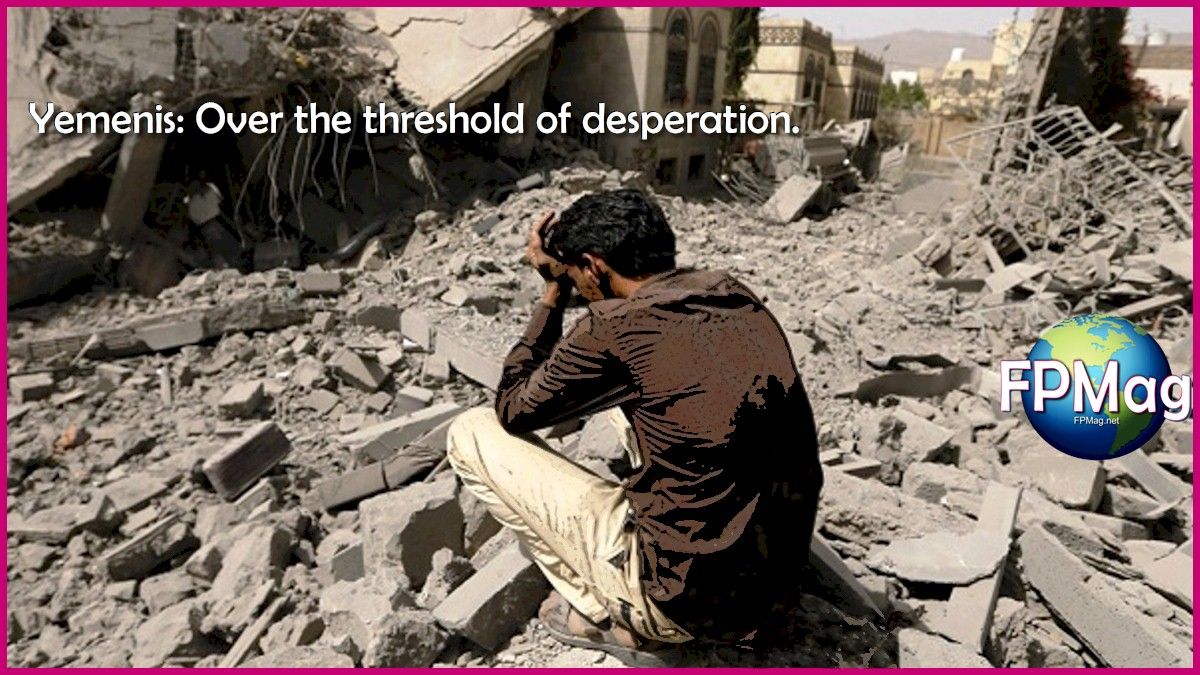 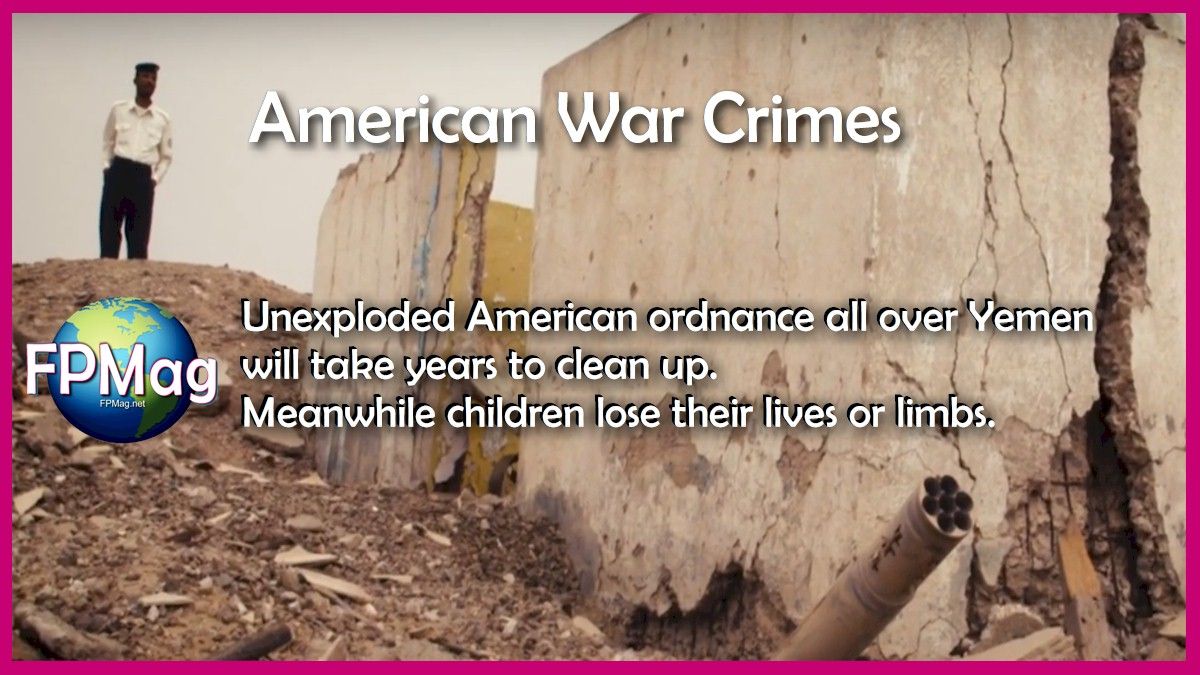 When the United States says “Not Me!” each time another hundred kids are blown apart in Yemen, it adds that it is not involved in the war against the Yemeni people except that Saudi Arabia is its 110 billion dollar bullets-and-bombs customer and the other coalition war criminal members.

This week Trump and Pompeo are acting like the Houthis put cruise missiles into the White House front lawn.

The world should have gotten over its dependence on fossil fuels  long ago.

In April 2015, the United States National Security Council spokesperson Bernadette Meehan remarked that “It remains our assessment that Iran does not exert command and control over the Houthis in Yemen”.

According to medical crews working in Yemen, nothing and nobody controls the Houthis.

There are several ways to deal with the Houthis’ (*wink) attack on Aramco.

Consequently the Houthis (*wink) attack on the Saudis (*wink) does everyone a favour, right?

“The attack on ARAMCO facilities in Saudi Arabia this past Saturday morning, 14 September, which has caused significant disruption to the Kingdom’s crude oil production, has consequences well beyond the region”, UN Special Envoy Martin Griffiths warned ambassadors, speaking via videoconference.

“At a minimum, this kind of action carries the risk of dragging Yemen into a regional conflagration. Because of one thing we can be certain, and that is that this extremely serious incident makes the chances of a regional conflict that much higher, and of a rapprochement that much lower. With Yemen in some way linked. None of that is good for Yemen.” 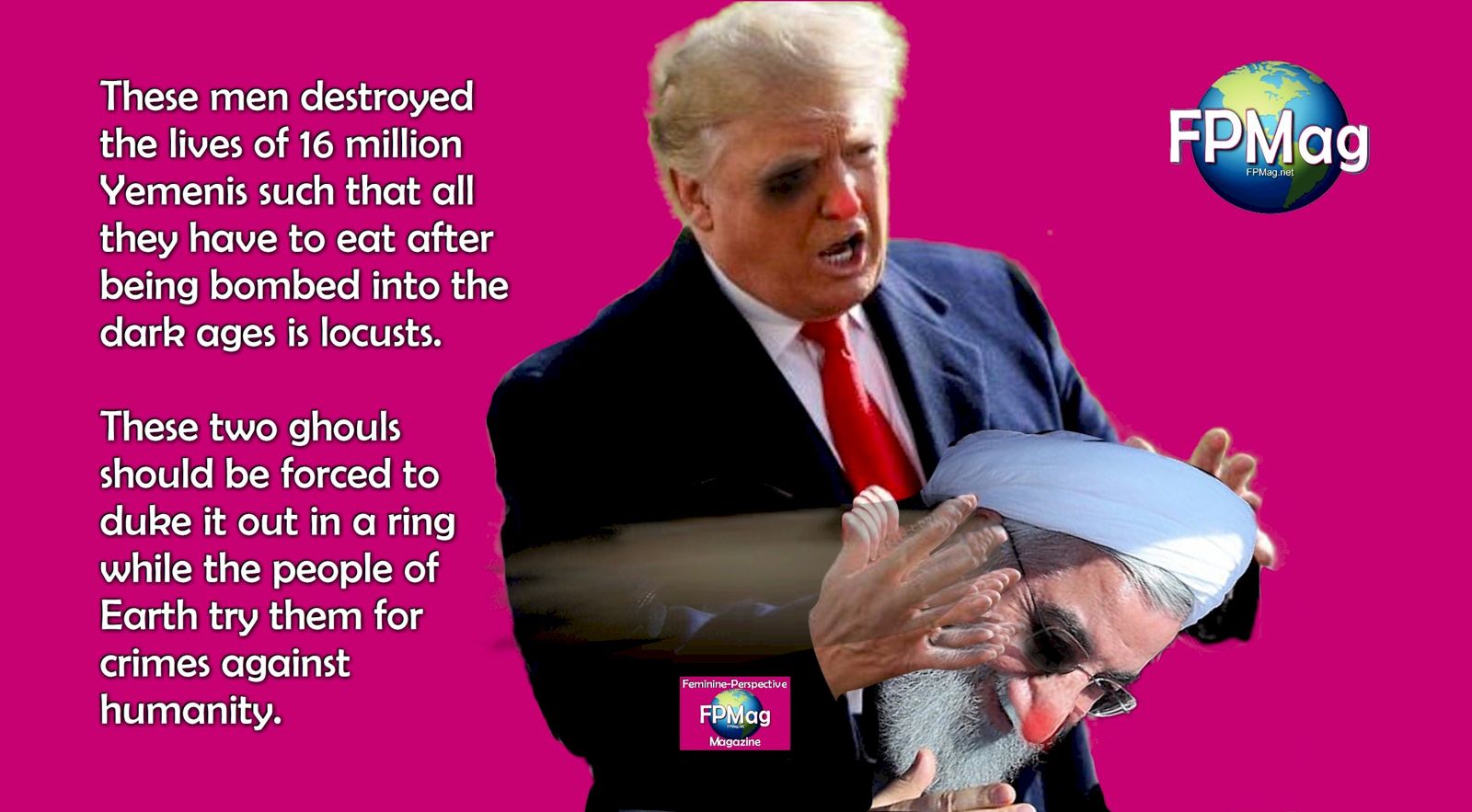 Iran has said it will meet with Donald Trump when hell freezes over. These two men should be made to stop using their nations’ devices of war against the peoples of their surrogates and duke it out alone in a ring while the world tries them both for crimes against humanity.

Sorry, we no longer believe this administration.
Your `boy who cried wolf’ commander in chief is a liar who directs his staff to lie as well.

Sad day for America when you can no longer trust the government.

FPMag Coverage of this topic from Yemen and around the world.