Trump distracts from US Yemen crimes as Houhtis say they will hit Saudi Arabia Aramco again.

“Saudi Arabia’s low level air defence system is exactly like that of America’s — a piece of crap — despite Saudi Arabia spending in excess of $80 billion per year on weapons,” says an IDF member who remains anonymous because she is not authorized to speak on behalf of Israel.

By comparison, Canada with a ten percent larger population but with 3 million miles of coastline to defend, spends only 25 billion per year, roughly a quarter of Saudi’s 2020 budget.

Even Russia’s legacy-300 low level air defence system kills 99% of everything that is thrown at it so far in Syria, the point being that it can be done. It’s newer systems like the AS-400 and 500 are much more lethal as defence systems because of the more advanced interactive acquisition and tracking technology plus its real-time synchronization to more responsive electro-mechanical systems.

The truth is that America is behind in everything except numbers. It has more tons of explosives than anyone else and sells it to everyone willing to kill Muslims and non-whites. America, through surrogates, has put more tonnage of explosives on groups of civilians than anyone since WWII. The evidence lies in the mess of the Middle East it has made and the number of civilian deaths it created amounting to now nearly two million.

The Emergency relief Coordinator of the United Nations is exasperated beyond words. He says he feels like the main character in Ground Hog Day, having woken up 15 times and delivered shockingly graphic updates on the worst human catastrophe in the world, without heed; without change.

Watch the warnings the USA has received 15 times from the UN but the bombs keep falling on the Yeminis.

America’s Donald Trump and Michael Pompeo make fools of themselves frantically pumping up the volume against Iran to distract from the real story which is their war-crimes in Yemen. America is a global pariah. The Aramco attack had one purpose which was to draw attention to the humanitarian crisis in Yemen that has been created by America’s greed and genocidal racism.

“If the Houthis wanted to kill people they would have hit King Salman’s  Palaces. They could have slaughtered the Royal Family in the night. That is not the Shia way. Shia Muslims are peaceful people,” advances nurse Anna in Al Hudaydah.

The Houthis explained to FPMag in Sana’a that their intent was to draw attention to their desperate situation as more bombs fall and more of Yemen’s children perish under the American naval blockade of food and medicine. 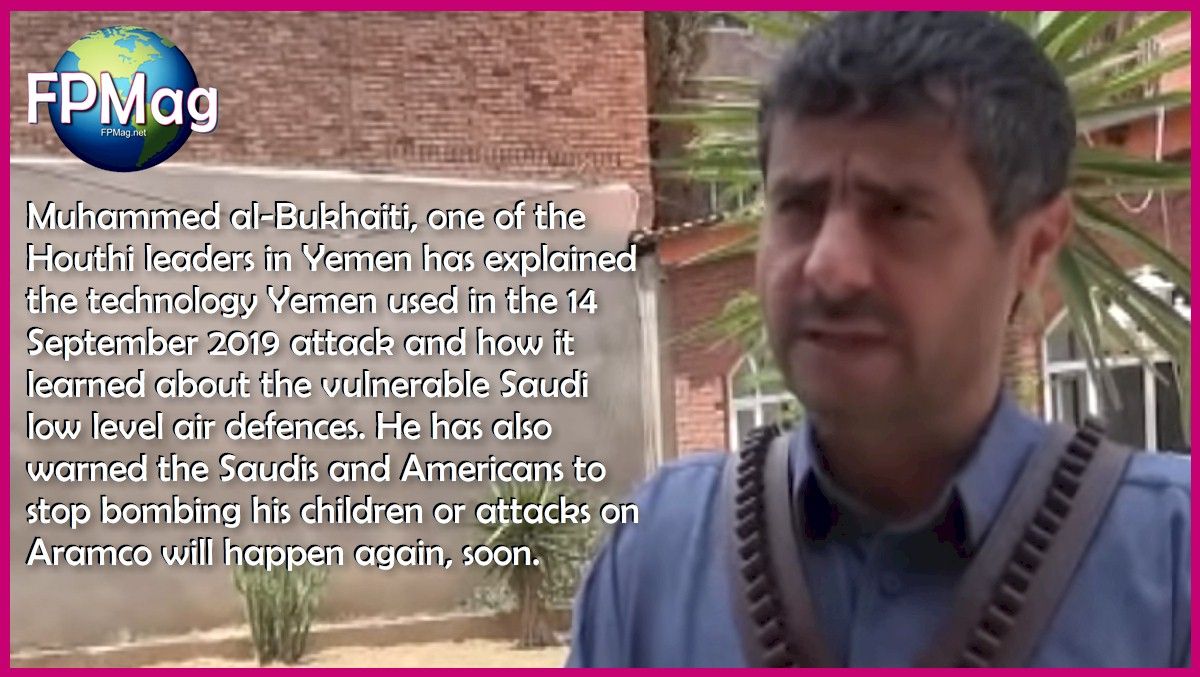 Muhammed al-Bukhaiti, one of the Houthi leaders in Yemen has explained the technology Yemen used in the 14 September 2019 attack and how Yemen learned about the vulnerable Saudi low level air defences. He has also warned the Saudis and Americans to stop bombing his children or attacks on Aramco will happen again, soon.
Photo Art/Cropping/Enhancement: Rosa Yamamoto FPMag

FPMag Coverage of this topic from Yemen and around the world.