The United States President is not the most powerful person in the world, he is a tinpot dictator, opposed to social mores, who embraces criminality. His favourite crime is fraud, followed by extortion. His predisposition to division, hatred and meta-violence has the world on the edge of WWIII.

The worst news, however, is that Donald Trump, despite not being fairly elected by America, has the support of a multi-million-membership violent cult he inspired to amalgamate. America is very sick. 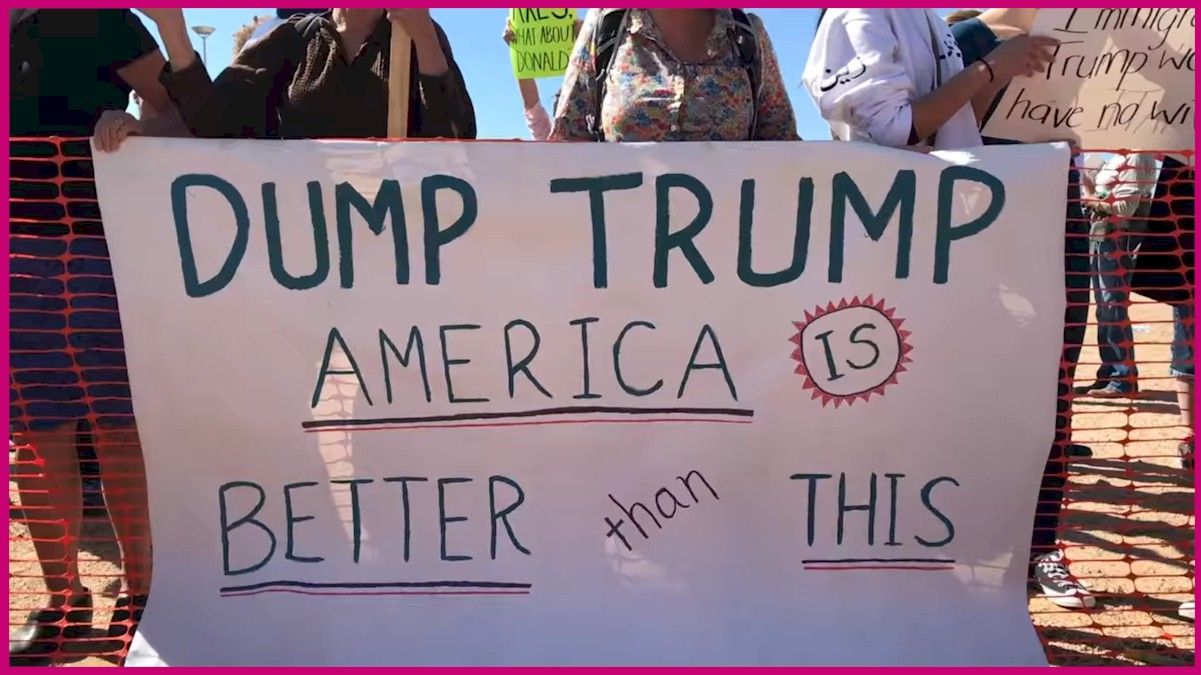 From The Sociopath, “a film by Ben Howe, will show you not only who this man is, but more importantly, how he got to where he is, who supported him in doing so, and what it could mean for the future of the nation.”
Photo Credit, Video Capture from: The Sociopath

People who have breathed the same air as Donald Trump have come away as damaged goods.

The ghostwriter on the book The Art of the Deal, Tony Schwartz, told Reddit during an Ask Me Anything session that the US president is “the most purely evil human being” Schwartz has ever met.

“I believe deeply that most people are better than their worst behaviors. I also believe there are some who are simply irredeemable and evil. Scott Peck called them “People of the Lie.” They lack any conscience, as Trump does, and so they’re almost purely evil. Trump is the most purely evil human being I’ve ever met, and also the most insecure.”

“I believe Trump is a racist. He considers black people, and Hispanics, and Muslims, and women, among others, inferior.”

” I never saw him read a book, and other than “The Art of the Deal,” I suspect he’s never read a book in his adult life. As for comprehension for what he does read, I’d say it’s early high school level. To judge his writing level, read his tweets, particularly the angrier ones, which is most, and which he writes himself. His way of communicating is very primitive.”

“I genuinely believe that if Trump wins and gets the nuclear codes there is an excellent possibility it will lead to the end of civilization,” Schwartz said before the 2016 election.

Vanished US Power, Control and Respect. Impeaching  Trump may be only cure.

Ukraine President Volodymyr Zelensky (left) may have been extorted by Donald Trump to use his Kiev government to launch an effort to besmirch Trump’s political opponent former VP Biden in the coming 2020 election for which polls have suggested Trump will otherwise lose to Mr. Joe Biden.
Photo Credit: Fox News Video Capture

Volodymyr Zelensky must be deeply shocked at his experiences in the last four months of learning about politics.

These were President Zelensky’s first four months in office. Donald Trump extorted him with the withdrawal of $400,000.00 American taxpayers’ military aid and cancellation of a Vice-Presidential meeting aimed at Ukraine support.

The Ukraine President needed the money and America’s support to fight his war with the Luhansk People’s Republic (LPR) which has been branded as a terrorist group. Trump wanted the Ukraine to build fodder for an attack campaign against Trump’s political opponent, former US Vice-President Joe Biden, just as the Russians had done in 2016 against his then-opponent Hillary Clinton.

The upshot of the extortion of Ukraine was Trump’s expectation of a Ukraine election support campaign like the Russians delivered in 2015-2016 or Trump would cancel the funds the American people had offered the Ukraine.

Despite muttering some unintelligible things, (giving the benefit of the doubt so far) Volodymyr Zelensky has correctly said the Ukraine—a country the world hopes will build its future on democracy—does not want to interfere in the USA elections.

A million volunteers supporting Constitutionally-Appointed Interim President Juan Guaido and seeking an opportunity to deliver the Humanitarian Aid that has been flown into Colombia while Maduro’s Military Junta has closed Caracas’ Airport. Photo Credit: Twitter

Maduro thereafter ignoring Trump, arrested and or killed the opposition Trump said he would protect; launched a Gestapo-like kill squad to conduct extrajudicial killings of his opponents; and there will be no elections. 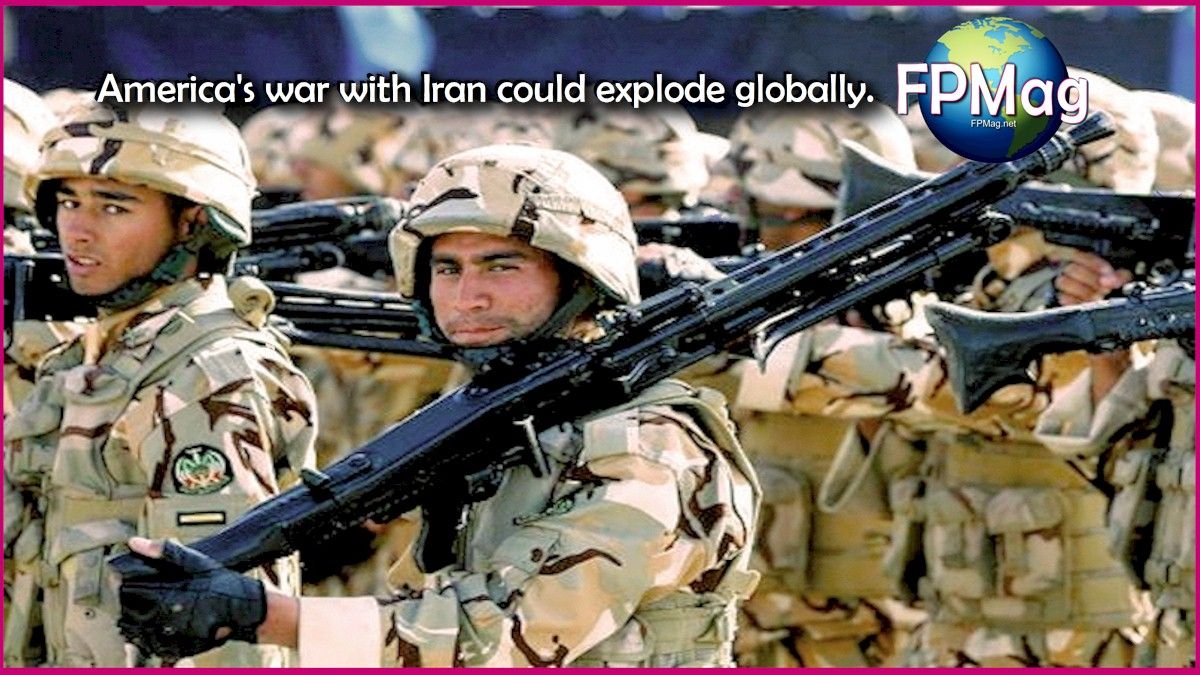 Forty years of bullying Iran has produced endless acrimonious diatribes from America such that its people believe Washington’s lies. Iran is not the world’s worst sponsor of terrorism. Iran is the enemy that American politicians created through bad governance and willful deceit.

Picking on Persians will not deliver a “turn-the-other-cheek” reponse. History spells that out clearly. In the 8th, 7th, 6th and 5th centuries before Christ, just looking cross-eyed at kings Tiglath-pileser, Cyrus or Xerxes, would fetch hordes of invading Persian soldiers.

America tried to meddle in Iran’s affairs and got a bloody nose. Nothing has changed in the past 40 years until the JCPOA in 2015.

But in May 2018, Donald Trump, who once said Saudi Arabia is America’s enemy not Iran,  caused another huge breach of the global peace and reneged on America’s commitments, violating the JCPOA by imposing starvation sanctions on Iran. Of course he anger in Iran is such that the Islamic Revolutionary Guard and the Shiite Clerical Regime wants to punch the ‘ignorant psychopath’s’ lights out, as they have said.

America continues to call Iran a malign actor but it is not.

Iran is an enemy of America since 40 years, and behaves no differently toward America than America behaves toward Iran.

Iran is an enemy of Israel since over 70 years ago. Ditto on the behaviour.

In each of these conflicts, leaders of both sides act like malignant jackasses with the sole purpose of  their malign acts being the harming of each other, regardless of who else they hurt, including their own populations. But each side claims to be the colour of righteousness and their opponent the epitome of evil. The rest of the world would be stupid to get drawn into this toddler-mentality quarrel.

Under Trump the USA has vacated the precedent-setting Paris Climate Accord.

Trump told his cultish followers that climate-change is a hoax for the benefit of “the left” enemy, as he cultivates his “anti-society cult” to oppose the alleged invisible enemy, “the left” which from his complaints sounds like a utopian society aimed at a clean, caring-and-sharing humane world of unfettered equality with a glorious future of harmony and good will, all the things Trump hates.

Meanwhile the children of the world in defiance of the man who has been killing them have turned to the streets in protest in their millions in over 10 dozen cities. All the while the changing climate wiped out the Bahamas and continued to melt the polar ice caps.

Donald Trump has broken many of America’s binding commitments to global law and order. For example, the United States has vacated universal human rights, child safety, war-crime, environmental protection, and nuclear non-proliferation agreements that are the mainstay of global peace. It’s hard to say that any one area is more problematic than another.

Among his traits, Donald Trump’s meta-violence is a bigger problem than his lies. Lately he has been fishing for someone to carry out a hit on people who are talking to authorities about his wrongful conduct from the White House. It’s a subtle message lurking below the facade of his ambiguous words.

Donald Trump is a compulsive liar according to numerous observers, some of whom are highly respected psychiatrists.

Whistleblowers are spies according to Donald Trump. Anyone who assists whistleblowers is a spy as well, he says.

“You know what we used to do in the old days, when we were smart, with spies? We used to deal with them a lot differently than we do today.” – Donald Trump

This criminal act of a United States President threatening American citizens not to report his crimes is also a violation of whistleblower statutes aimed at Americans to choose not to be complicit in crimes but to report the criminal organizers. It doesn’t matter if the Trump threat against whistleblowers is implied or a direct written edict, it is no less a threat and it is no less a crime from a sitting US President who has a higher than normal obligation to abide the US laws.

In the case of the 12 August 2019 complaint filed against Donald Trump and his co-conspirators, FPMag has been told is a male Central Intelligence Agency (CIA) analyst.

A number of people inside the White House, and two or three persons including Ambassador John Bolton, former National Security Advisor who recently resigned their posts at the White House (or are about to resign) have profound concerns about how Trump is conducting POTUS as an instrument of Trump’s personal prosperity.

The CIA man, now a whistleblower, is central to a group which has acted honourably by deciding not to be instruments of crime working for a criminal boss but to find the path of service to their employer, the American people.

Trump meta-violence has been implicated in many murders.

ABC News conducted research that said 36 mass shootings in the United States have been inspired by Donald Trump meta-violence. ABC’s report says that the case information is based on court records and sworn testimony.

That Donald Trump encourages Americans to carry out his implied threat, there is no doubt.

The 2016 election of Donald Trump is controverted so badly by the Russian interference Special Counsel Mueller indictments exposed, that Trump’s election has been null and void since the last ballot was cast.

Trump should have resigned. Now he must be impeached.