20 September 2019 Manila interview with a resistance soldier. – This is part two. Part one is here.

FPMag interviewed a female security expert and former soldier now employed by a mercenary-type organization that protects women and children in war zones. She arrived in Manila at the end of the past week on a circuitous route through Aman, Jordan that originated in Idlib, Syria. Her role in the Philippines is to work with and help train private security persons to protect a young person, a rape survivor, through a court attendance process wherein the survivor is feared by her family to be in grave danger.

In yesterday’s report, Beverley explained her first experiences entering Mosul, Iraq in late 2015 through checkpoints while breathing dust in a secret compartment of an oxygen bottle delivery truck.

“That was maybe the longest ride of my life,” said Beverley,  “frequently getting into the crawl space as we came upon yet another checkpoint on the highway from Baghdad to Mosul.

“Finally we reached the main building where I was assigned my quarters on the second floor of a six level building plus basement car park (which was converted to a shelter for endangered persons).

“People on the security team I once served with were warm but very different. They had aged more than I had in the same time since I last saw them. But above all else I noticed the cohesion morale among them and their new colleagues was as tight as could be seen anywhere. Loyalty up, down, left and right. These people, my people, had become the best of the best.

“There was no banter, no genders, no sh*t. It was all Team and Team business.

“I had been sent to a medical doctor who also ran the medical unit. I was coughing my guts out after my ordeal in the dust bucket truck from hell. It was the first time in my life that I ever felt really “cared for”.

Security details were done surreptitiously across too much geography, it seemed.

“It was a complicated assignment because the protected areas were scattered and often right under the noses of the Daesh.

“Because everyone of the medical unit also worked in one of two Mosul hospitals for full shifts at least four days a week, schedules and escort trips were any time, 24/7.

“Escort duty meant wearing full female Islamic garb and accompanying a nurse or a doctor to the hospital. They were not allowed to travel in less than twos and no more than foursomes at first. Later Daesh wanted that changed.

“The rest of the time they worked in scattered clinics around Mosul. Most of the clinics were abandoned doctors’ offices or dental clinics. One was even an aesthetic clinic that was partnered with the next door dental office, both abandoned by their original owners who had fled and left our gals with the keys, asking only to try and protect the units from being occupied by the enemy.

“Daesh believed our medical side to be “Midwives” and would ask the medical side to care for their wives or girlfriends. That was accommodated at a special clinic that was used as a front of sorts. Any Moslawi was treated there and after a time, the Daesh drivers who were charged with picking up medical crews when there had been a battle or bombing resulting in mass injuries of fighters and mostly civilians, met at this one location not far from the Ibn Sena hospital.

“The drivers would under orders be collecting doctors and nurses for long work shifts in the hospital. This fact that the lazy drivers unbeknownst to their bosses had their work made easy, added immensely to our security situation. Staff could go to the omnibus clinic and meet their driver without exposing their true locations meanwhile the clinic workers made meals and hot drinks for the different drivers and came to know them and prod them for information on various commanders whereabouts and things like that. They didn’t know much but that’s how our intelligence gathering worked–a series of connections between all of our people and various enemy or ‘subcontractors’ each women getting a small piece of information and the security team pulling it together. It was tight.

“The drivers and other support teams like the EMS were just ordinary Moslawis who were lucky enough to be trusted and got a job.

“Somehow, we saw them as enemy and were always proven right on that.

“We had our own EMS system. It was an old stake truck that hauled Daesh bodies to buildings that were about to be bombed. Enough said on that.

“The enemy was a strange mix. Some were just ordinary Arabs who got caught up in the early propaganda of Daesh but were later disillusioned. I was young but many of the Daesh fighters were kids, much younger. I guess I am still young, but I feel old.

“The older Daesh commanders were the scum of the Earth. They belonged to Psychopaths Anonymous and all used phony names and had raped or stoned a woman to death in the past 24-hours. They belonged in a horror show only. According to the long-timers, these scumbags had come in the second wave of Daesh occupation along with many Russians, French, Chechens, Ukrainians and Tajikistanis.

“There isn’t enough hours in a year to explain how awful these persons were.  Nor do I or anyone have the emotions left to get into that. It should suffice to say that even I who had never killed a person face to face in my life, even as a soldier, felt very comfortable killing these scumbags. For every dead Daesh, hundreds of lives, maybe thousands were saved.

“We had a wide, two-layer perimeter rule. Any armed Daesh who came to the perimeter around a certain key facility where we were hiding endangered persons, was taken out by our snipers. A cleanup crew would haul the remains to a next-target building. An assault team readied for the second perimeter layer if it came to that.

In Mosul I learned to justifiably hate these men who raped children and regularly stoned women to death.

“I have no use for Taliban, HTS (former al Nursra), al Quaeda, Hezbollah, ISIS, or any of these mentally sick male murderers. Actually their women are worse in their brutality and also because a person might be inclined to trust them.

“It doesn’t matter the name, all of these salafi jihadist or Iranian so-called terrorists are part of  a harvest of psychopathy brought to a cause for no other reason than the power, control and monetization of  power and control by those who lead them. They are seriously sick. The seem to love blood and gore and act like they don’t care if they die. They are serious substance abusers and rapists. There are the occasional wannabes but they don’t last past their first fight. They would flee Daesh or get caught and murdered by their “friends” trying to escape.

“Civilian infrastructure in the Middle East such as schools and hospitals are vulnerable to the brutal killers who bring genocidal war against civilians they dislike for race, color or creed which hatred erases all semblance of war-time concern for civilian lives. The human race has sunk to its lowest point in modern times and has begun to resemble the drawings on cave walls from paleolithic times, when humans were bashing each other on their heads with crude stone weapons.” — Katie Alsop, The RINJ Foundation

Every Day was an Undercover Op. At night we were the resistance.

“Daytime operations for me were working undercover doing escort duty.

“It felt weird being in Islamic civilian garb under our sniper overwatch as that was once my role.

“I began to bond with the medical crew I was supposed to be protecting. That was something I had been warned to avoid, but it was unavoidable. These were the bravest women I have ever encountered. Strong, confident, determined, but always a little sad and numb. Many had been the students of the core group of doctors and nurses. They had decided to stay in Mosul after the Daesh occupation and when most people tried to flee the city shortly after the occupation and every day since. Many of their group had fled Mosul in the early days with a hug, kiss and farewell. Some actually came back. Most didn’t.

“The medical team had been working in Syria since 2012 and had been using Mosul as a warehousing and training center. As time went by they and most NGOs had been driven almost completely out of Syria. Some went to Gaziantep in Turkey and others went to Mosul.

“Most of the medical side were either born in Iraq or Syria. Some had come from Turkey to train at the Mosul University a few were from North America but had been in the Middle East for years. There was one Saudi woman and a Yemeni woman. They were a lot like the security side inasmuch as they bonded among themselves and across the city with the other units into a synchronized team. I was honoured to be among them.” 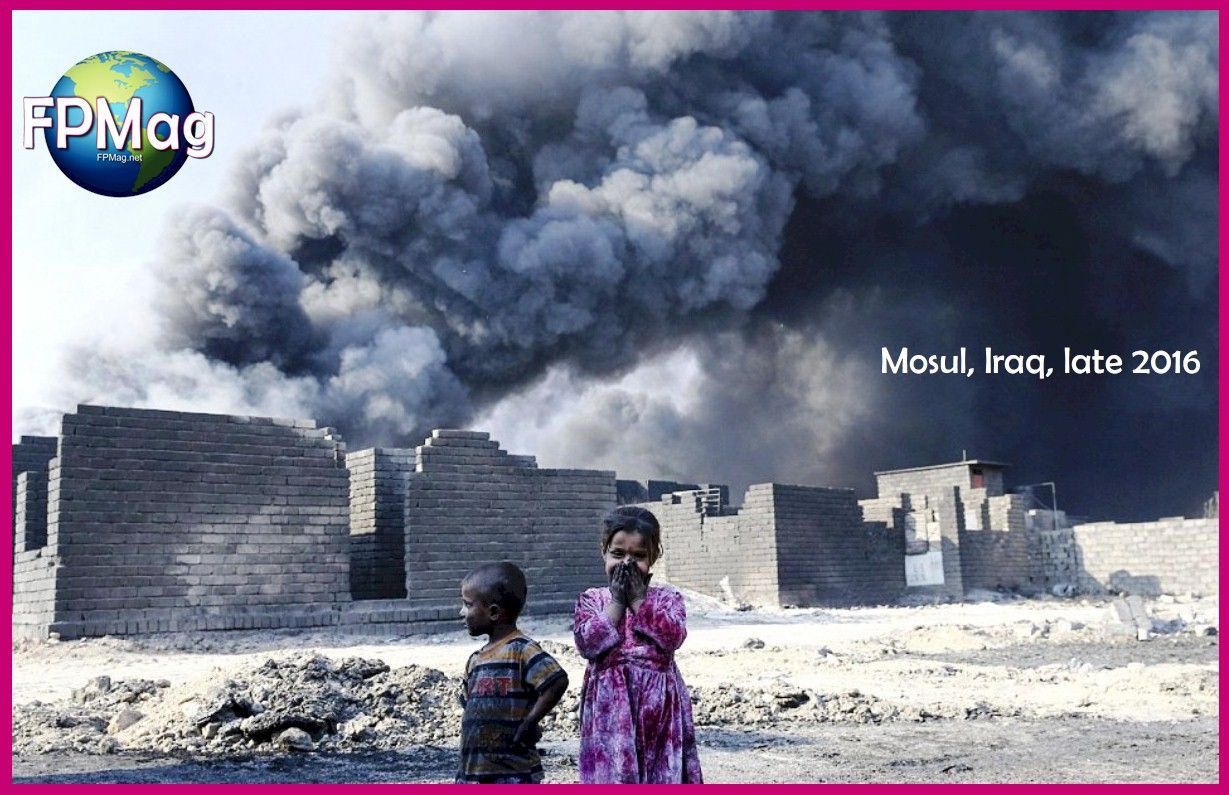 The horror of Mosul for children will never leave their eyes.

Interview to be continued tomorrow …