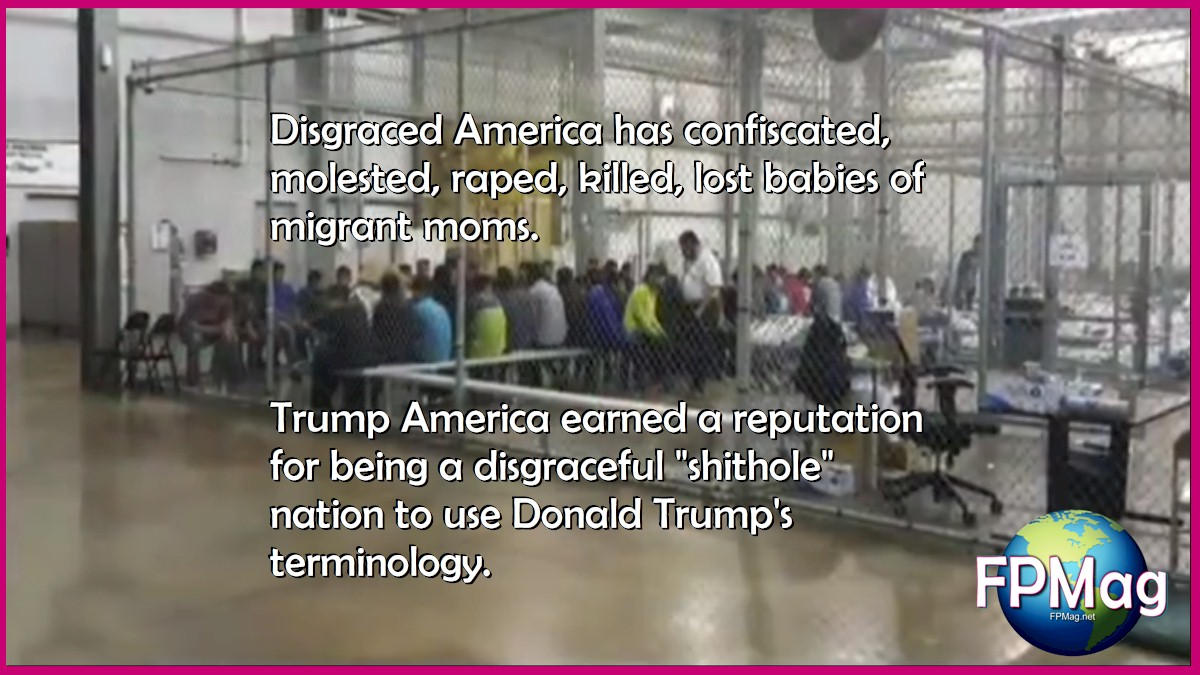 Disgraced America has confiscated, molested, raped, killed, and lost babies of migrant moms.
Trump America earned a reputation for being a disgraceful “shithole” nation to use Donald Trump’s terminology. Photo is US Government Handout.

Many soulless Americans adore cheaters; praise liars; support self-indulgence; hate the poor; support women-haters, racists and child rapists; show disdain for non-whites, non-Christians; have a superiority complex; and demonstrate disdain for the value of human life. We learn this from the 40% of Americans who support Trump.

On top of that this same group welcomes Russian interference in their democratic election process.

“Recently Trump spread the rumour Iran was messing with US elector lists. This is completely untrue. It is a categorical lie by an American political hack intended to distract attention from the Kremlin. Russia and only Russia has launched a state-sponsored scaled attack on the American democratic processes,” says Simon Baldock who leads an Israeli Intelligence private agency.

“Israeli, British, Canadian and American signals intelligence operations which have penetrated the Russian intelligence networks have led their senior officers to believe that Russia has nearly unmitigated access to several key US swing state voter systems, especially those controlled by Republican governors and legislators,” said Baldock.

“This data can be used by foreign actors to attempt to communicate false information to registered voters that they hope will cause confusion, sow chaos, and undermine your confidence in American democracy,” said the Trump campaigner, John Ratcliffe.

“To that end, we have already seen Iran sending spoofed emails designed to intimidate voters, incite social unrest, and damage President Trump. You may have seen some reporting on this in the last 24 hours or you may have even been one of the recipients of those emails.”

“Google’s Gmail automatically puts those mails in the spam basket and deletes them,” says Baldock. “This is nonsense. Russia nearly owns the voting computer systems in key Electoral College States as it did in 2016 and has assured Trump that if he follows their directions and sticks to the plan of sewing mistrust in the election system, the voters will accept an overriding Electoral College transition to GOP voters.”

FPMag checked with a Canadian source and an Australian source, each close to the information and with only cosmetic critiques, they agreed with Baldock’s assessment.

Add “treason” to the list of indecencies that Trump supporters are willing to nod at.

Over 300,000 additional Americans have lost their lives this year under Trump. How is that, “OK”?

Donald Trump says he has saved millions of lives from COVID-19. That is an atrocious lie. In all the world there are 1.1 million dead, not millions. Roughly one third of the world’s SARS2 deaths are Americans. Trump killed Americans, not saved American lives. But Americans cheer him on.

Donald Trump says, “We have a lot of cases because we do too much testing.”

But 300,000 Americans died from COVID-19. Testing didn’t kill them, bad American leadership and lack of pandemic mitigation killed them. What’s worse is that these deaths are OK with Trump supporters. 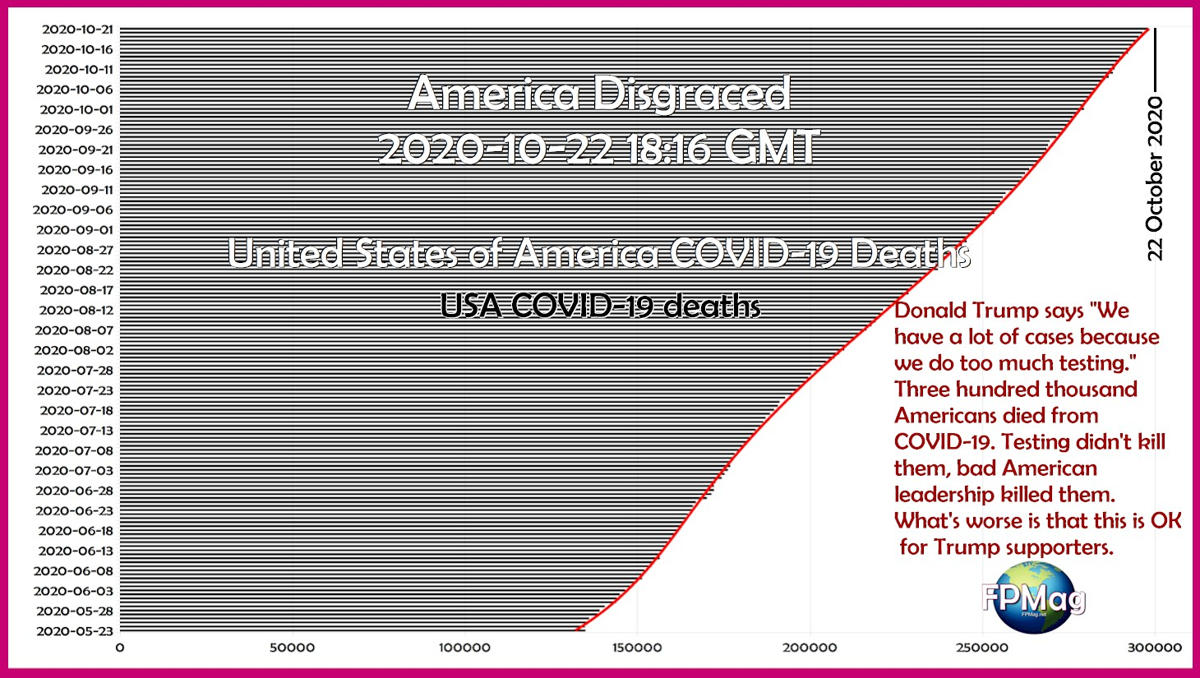 Donald Trump says “We have a lot of cases because we do too much testing.”
Three hundred thousand Americans died from COVID-19. Testing didn’t kill them, bad American leadership killed them. What’s worse is that this is OK for Trump supporters. Source: CDC and  Civil Society Partners for Human Solidarity against COVID-19

Omar al Bashir may not have been this bad. al Bashir has been charged with genocide, crimes against humanity, and war crimes, by the International Criminal Court.

Donald Trump has been accused of genocide in several countries, including the DPRK; dozens of crimes against humanity especially toward children; and dozens of war crimes.

How were Americans able to endorse this Crime Against Humanity? 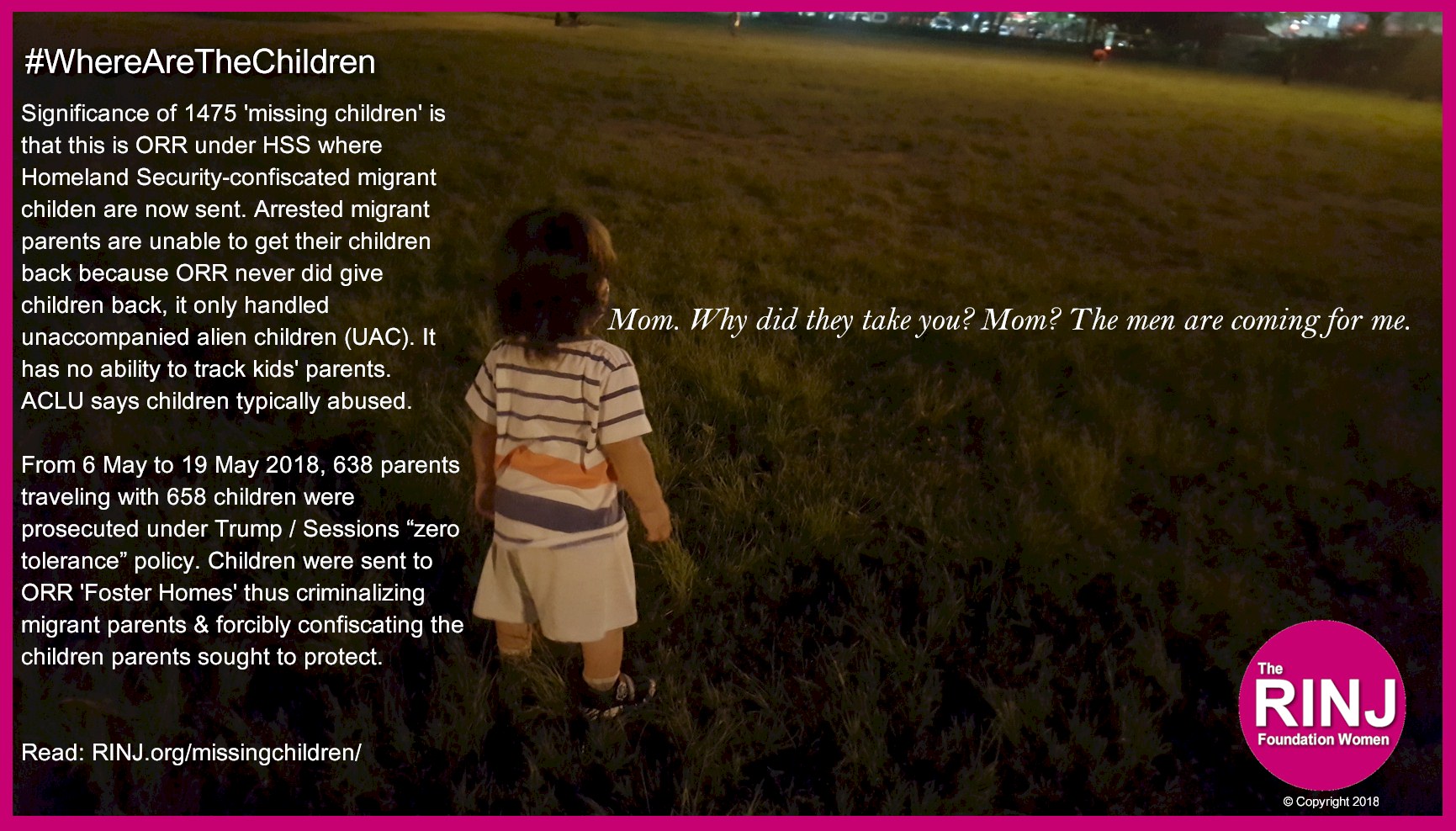 “America has come to devalue children. Migrant child-confiscation, bombing school busses, and dismemberment abortion tells a story of a nation that does not value its babies,” says a RINJ Foundation Report on Donald Trump’s criminality towad children.

Steven Wagner was one of the first Whistleblowers on Trump. His complaint led to discoveries of US Government Torture of Children 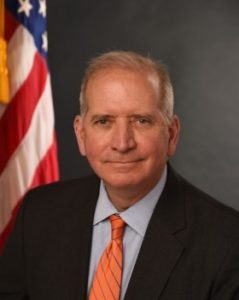 Steven Wagner Acting Assistant Secretary (Administration) for Children and Families U.S. Department of Health and Human Services told the Permanent Subcommittee on Investigations Committee on Homeland Security and Governmental Affairs of the United States Senate that the whole concept of snatching children from migrant mother’s arms had already resulted in lost children and utter chaos.

“From October to December 2017, Office of Refugee Resettlement (ORR) attempted to reach 7,635 unaccompanied children (UAC) and their sponsors.

“ORR was unable to determine with certainty the whereabouts of 1,475 children.

How is this acceptable to US Voters? Disgraceful. 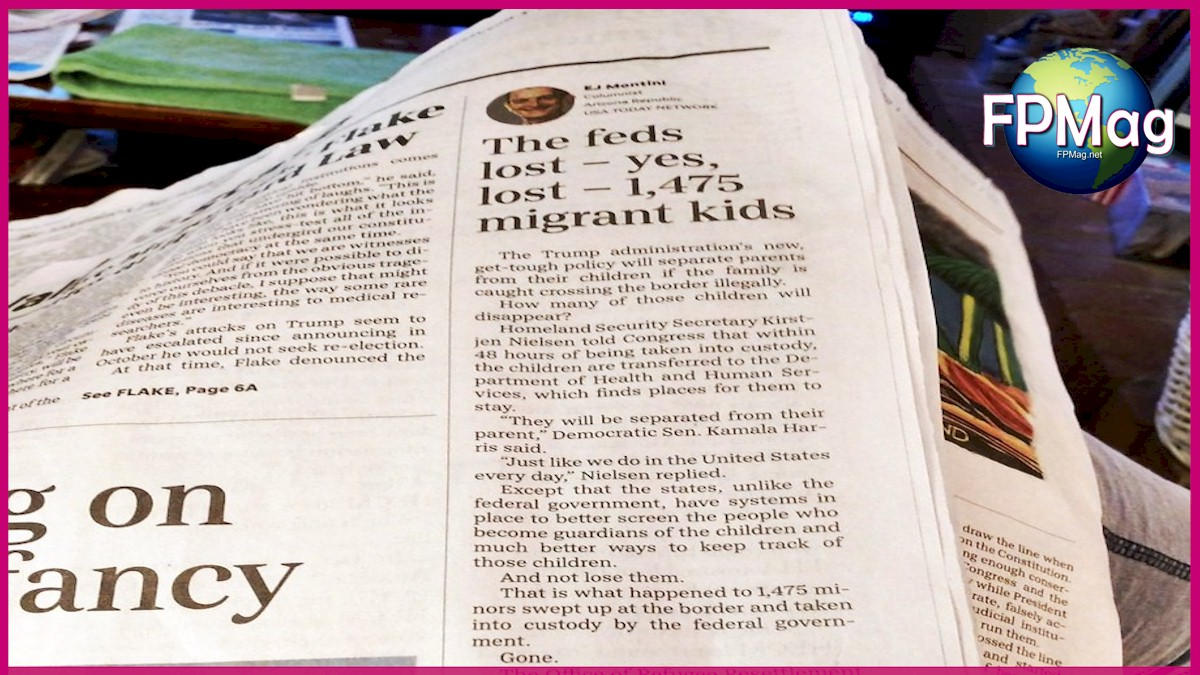 Headlines. 1,475 Minors swept up at the Mexican border are gone. Gone.

“If you dig deeper you will encounter anecdotes of so-called “Foster Homes” being conduit gateways for getting children back into the slave trade. These enterprising fakes were the response of the criminal slave trading groups to the unaccompanied alien children project America created to deal with child sex slaves slipping across the border from Mexico,” says a RINJ Foundation investigator. 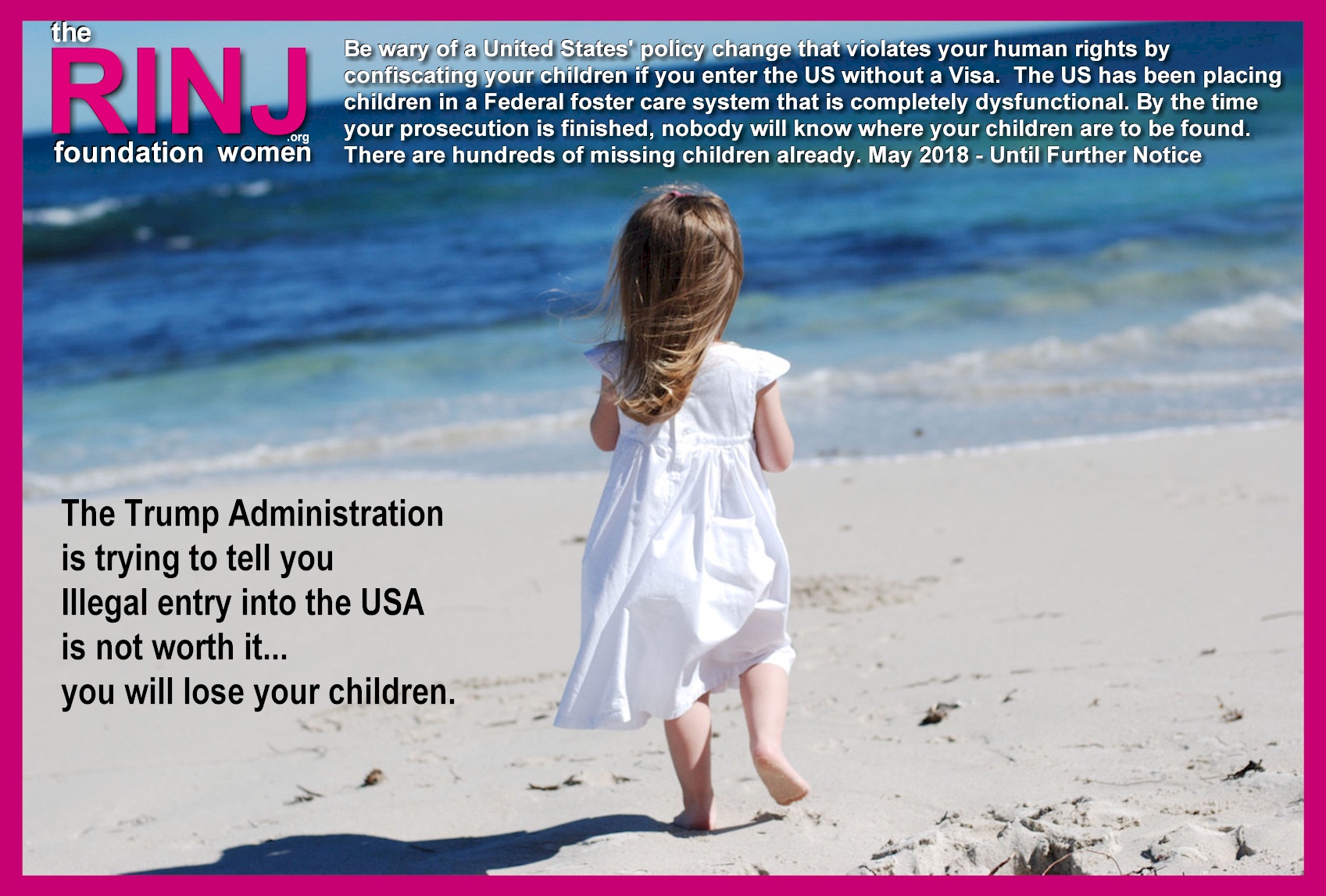 The Trump Administration was trying to tell women that Illegal entry into the USA is not worth it…
“you will lose your children”. And they did. Hundreds of families have lost their children say RINJ and ACLU sources. Courtesy of the RINJ Foundation which filed a Human Rights complaint to the UN High Commissioner of Human Rights. “The RINJ Foundation has filed an official complaint to the UN Human Rights Commissioner under the non-binding (Common Law) Universal Declaration of Human Rights. It’s not a complaint for putting Mr. Trump or Mr. Sessions in prison, it’s about finding a fair and humane remedy for the migrants. But the aspects of the Universal Declaration of Human Rights we cite are covered in other statutes in America and internationally. See OHCHR – Convention-on-the-Rights-of-a-Child also the Report of the Special UN Rapporteur. “

“Donald Trump in 2017 wanted children taken from migrant parents as a deterrent to future migrants approaching the United States. Today the ACLU reports that many children have been raped, tortured and killed while others have simply been lost. Thousands of children have suffered abuse under the Donald Trump government.”

“Trump was the first US President to publicly call displaced migrants “animals”. He has promised his xenophobic alt-right fan base that he will build a wall between Mexico and the United States. He also says he doesn’t want to bother with immigration judges and due process for asylum-seeking migrants.”

BREAKING: Through our litigation, we just reported to the court that the parents of 545 kids — forcibly separated by the Trump administration’s cruel family separation practice — still cannot be found.

At one point Trump was allied with Omar al Bashir in the invasion of Yemen and murder of dozens of Yemeni children.

American collusion in the 9 August 2018 bombing of a civilian school bus passing through a crowded market in Dahyan, Sa’ada Governorate, Yemen, near the border with Saudi Arabia.

American complicity in the 2 October 2018  assassination of Jamal Khashoggi—a columnist for The Washington Post, former general manager and editor-in-chief of the Al-Arab News Channel— has never been addressed.

American mass murder by drone of one dozen Iraqi and Iranian officials on 3 January 2020 in Baghdad and a similar attack in Yemen, has also never been addressed as the mass murder that it was.

Donald Trump’s America in January 2020 received knowledge of its first case of COVID-19 at the same time in the same day as did South Korea and within days of Taiwan, New Zealand, Singapore and others. America did nothing and is nearing one third of a million dead heading for a million deaths by next Spring.

The impeachment of Donald Trump, the 45th president of the United States, was initiated on December 18, 2019, when the House of Representatives approved articles of impeachment on charges of abuse of power and obstruction of Congress. The Trump-controlled US Senate acquitted Donald Trump of these charges on February 5, 2020 but he remains an impeached US President. 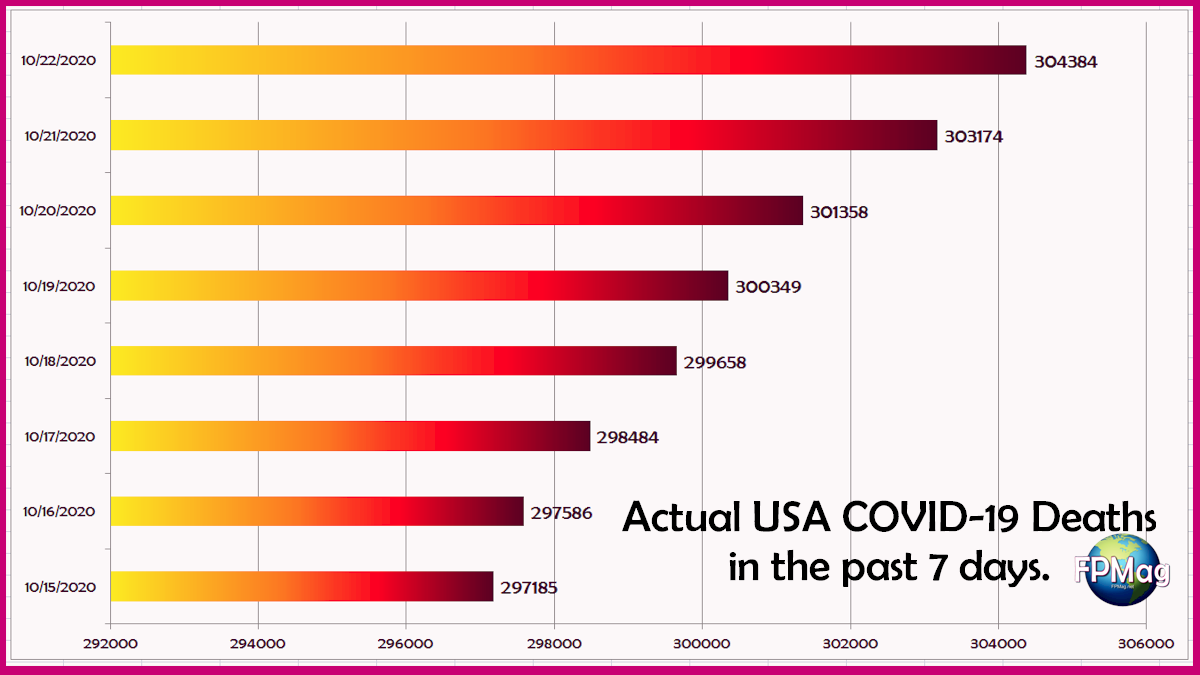 Actual USA COVID-19 Deaths in the past 7 days. Source: CDC and  Civil Society Partners for Human Solidarity against COVID-19