By the end of March 2021, the Civil Society Partners for COVID-19 Pandemic Solidarity has predicted for over three months now that the USA will suffer one million COVID-19 deaths unless its current course of action is corrected.

Researchers at the University of Washington’s Institute for Health Metrics and Evaluation (IHME) have released their new numbers, updating the COVID-19 death toll forecast through Feb. 1, 2021, in the United States using the Trump government published data.

The University of Washington model shows that nearly 2,900 deaths daily by the end of December, will bring the total deaths to about 502,854 by the end of January if mask wearing mandates continue to ease. Note: The raw data from this study can be downloaded (IHME_COVID19.zip).

Fred Harris of the Civil Society Partners for COVID-19 Pandemic Solidarity explains that his group has arrived at essentially the same numbers, but a little higher using a complex coefficient for a polynomial equation to achieve estimated actual deaths vs the US reported numbers of deaths.

“This is done by including the excess deaths in the equation for the past fifteen years, building an algorithm to create a trend line,” explains Harris. “We also had to establish a formula to express and remove those excess deaths that cannot be attributed to  COVID-19.”

Why use actual and projected excess deaths to build future-looking models?

“Excess mortality: the gold standard in measuring the impact of COVID-19 worldwide?” is a report of the Journal of the Royal Society of Medicine.

The report sets out that,

“As the pandemic has progressed, there has been a growing focus on excess mortality as a more reliable metric for comparing countries.15 Excess mortality provides an estimate of the additional number of deaths within a given time period in a geographical region (e.g. country), compared to the number of deaths expected (often estimated using the same time period in the preceding year or averaged over several preceding years).15 In encompassing deaths from all causes, excess mortality overcomes the variation between countries in reporting and testing of COVID-19 and in the misclassification of the cause of death on death certificates. Under the assumption that the incidence of other diseases remains steady over time, then excess deaths can be viewed as those caused both directly and indirectly by COVID-19 and gives a summary measure of the ‘whole system’ impact. Excess mortality can also be standardised for age or population size to aid comparability between countries.”.

“For each ten reported deaths from COVID-19 the actual number is thirteen in most months including the excess deaths that were not tested but had pneumonia, thrombosis or other indicators resembling COVID-19,” he explained.

“Across the United States, at least 200,000 more people have died than usual since March, according to a New York Times analysis of estimates from the Centers for Disease Control and Prevention. This is about 60,000 higher than the number of deaths that have been directly linked to the coronavirus,” reported the New York Times researchers on 12 August 2020.

“We decided to take this approach months ago,” said Harris, “because we noticed a change in testing numbers and reported data as the 2020 Election campaign heated up. We did not want to be reliant on reported numbers that were being fudged as part of an election campaign so we track excess deaths and compare those numbers to reported Case Fatality Rates (CFR) and Infection Fatality Rates (IFR). That is why we looked for corroborating data from the actual excess death reports.”

The report, “Excess Mortality in the United States During the First Three Months of the COVID-19 Pandemic” by Roberto Rivera, Janet Rosenbaum, and Walter Quispe sets out that “Deaths are frequently under-estimated during emergencies, times when accurate mortality estimates are crucial for emergency response. This study estimates excess all-cause, pneumonia, and influenza mortality during the COVID-19 pandemic using the September 11, 2020 release of weekly mortality data from the United States.”

“So far in Q2 and Q3 2020 the Civil Society Partners model is accurate,” says Harris.

“Predicting out to the end of April 2021 since September has been a long shot,” he adds.

“We know that not all excess deaths can be attributed to COVID-19 hence we factor an attribution to other causes, which may cause a slight understatement.”

“Modelling that far out is seldom accurate but because the USA is not taking mitigation steps and the US President is encouraging mass gatherings without masks, it’s as if there is no stopping this thing and we know what happens in that scenario. If even 60 to 95% of America started properly wearing approved masks, this line would flatten out by hundreds of thousands of cases,” Harris added.

“People should not resign themselves to this outcome. If Americans elect a new president, and I think there are a couple of contenders to the incumbent, a change in direction after the third week in January could avert an enormous amount of deaths. If the USA keeps the present administration, America will be in the midst of a slaughter by COVID-19 disease that will get worse as time marches on,” Harris predicted.

Click any images in this article to enlarge and read.

One million deaths by end of March 2021 in the United States Unless USA population adheres to mitigation behaviours. Source: Civil Society Partners for COVID-19 Pandemic Solidarity

Graphed Projections from the University of Washington (IHME) based on US Government reported deaths. “We are showing the same projections,” said Civil Society Team lead. 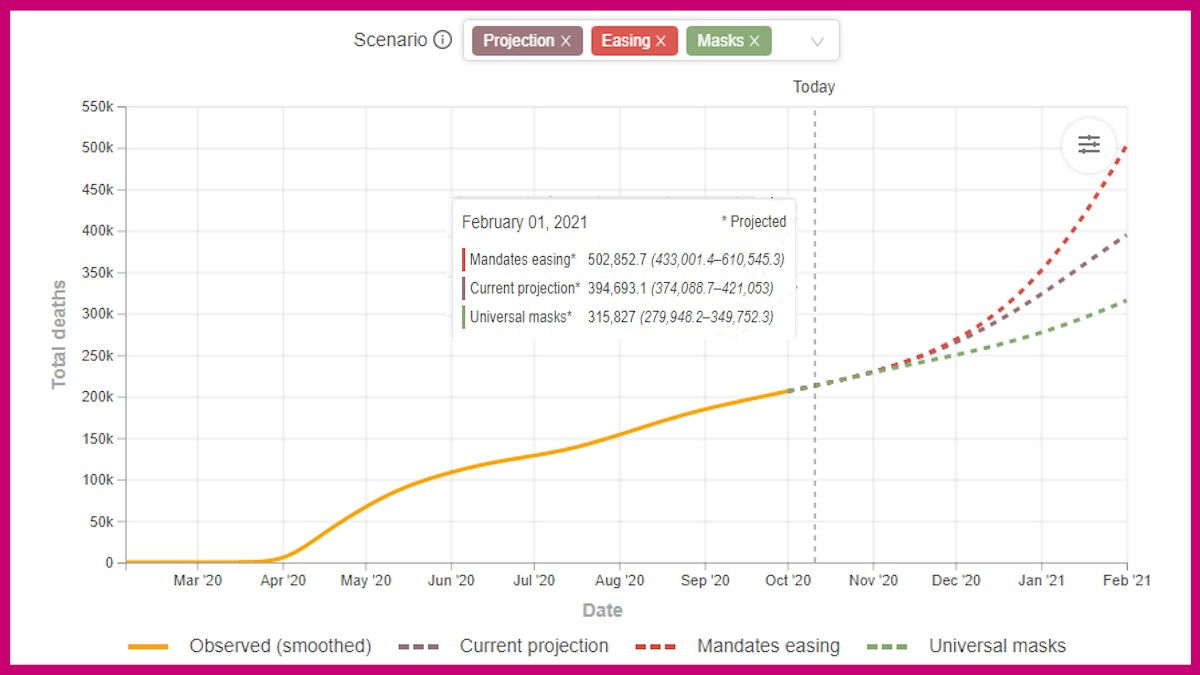 Researchers at the University of Washington’s Institute for Health Metrics and Evaluation (IHME) have released their new numbers, updating its COVID-19 death toll forecast through Feb. 1, 2021, in the United States.  The model shows that nearly 2,900 deaths daily by the end of December, will bring the total deaths to about 502,854 by the end of January if mask wearing continues to ease.  Source: https://covid19.healthdata.org/united-states-of-america?view=total-deaths&tab=trend

Narcissism at work? Why did Trump not start a deep investigation of contacts of the infected Americans and begin isolation of those potentially infected compatriots? He said it was “because it would look bad” if more cases were found.

The Universal advice from medical experts around the world is “Wear A Mask, maintain social distancing, and wash your hands frequently.”