Not everyone is wishing Donald Trump their good wishes or prayers.

It might be the pitch of the voice or something else but for even an experienced journo, a phone interview with an angry rape survivor makes one’s bones shiver like fingernails scratching on clean glass. Listening is educational, and a frightening look at the darker side of human behaviour. 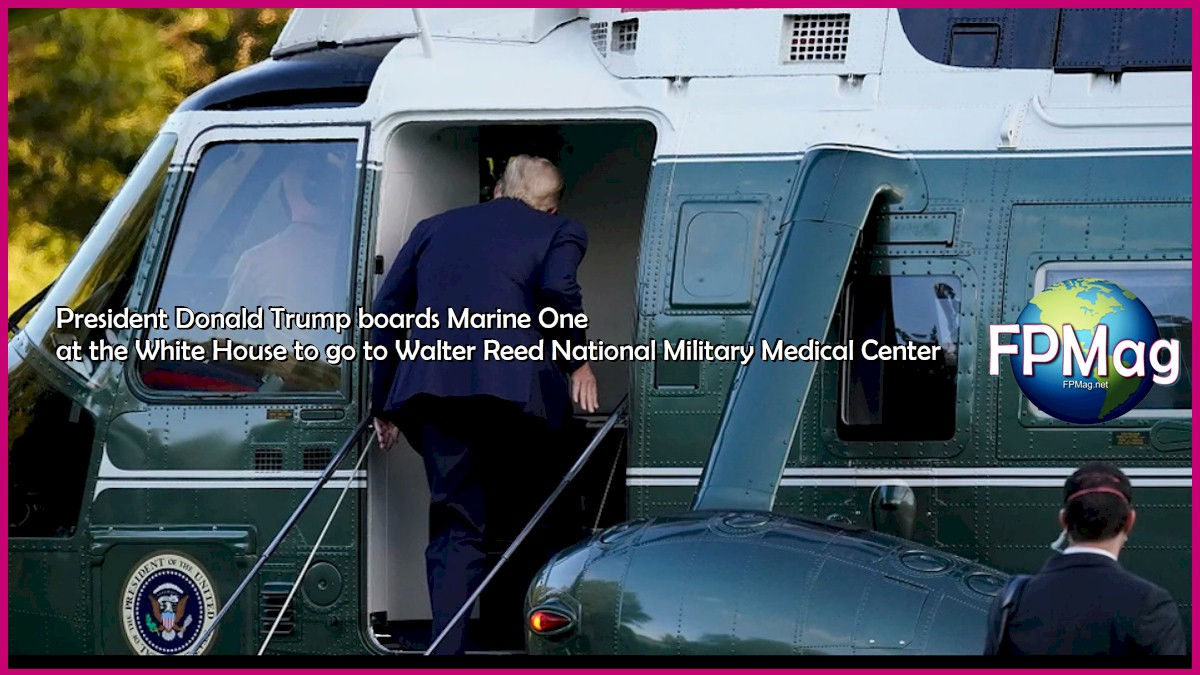 “This is a misogynistic, selfish scumbag who has in cavalier fashion marginalized and killed nearly 300,000 excess-death Americans we can presume are CoV deaths,” says Katie Alsop, a well known feminist.

“Trump has also fudged the CoV numbers and reduced testing so that Americans have no idea what is going on,” she added.

Dr. Buni in Syria where Trump admits stealing that country’s oil, said on a messaging platform, “Tell him to follow his own advice and drink some Lysol. Lots of people commit suicide that way since Trump told everyone else to ingest disinfectant.”

“I read this hospitalization as being Trump having an anxiety attack, something that happens to antisocial personality disordered cases very often,” said the Syrian-Canadian doctor.

“Trump likely demanded his people to panic and get him to Walter Reed is my guess. But it may work out for the best. It is a good facility.”

“Nothing is right about the timeline of Trump’s story. Somebody is telling lies and that is likely the biggest liar in the world, Donald Trump,” she stressed. 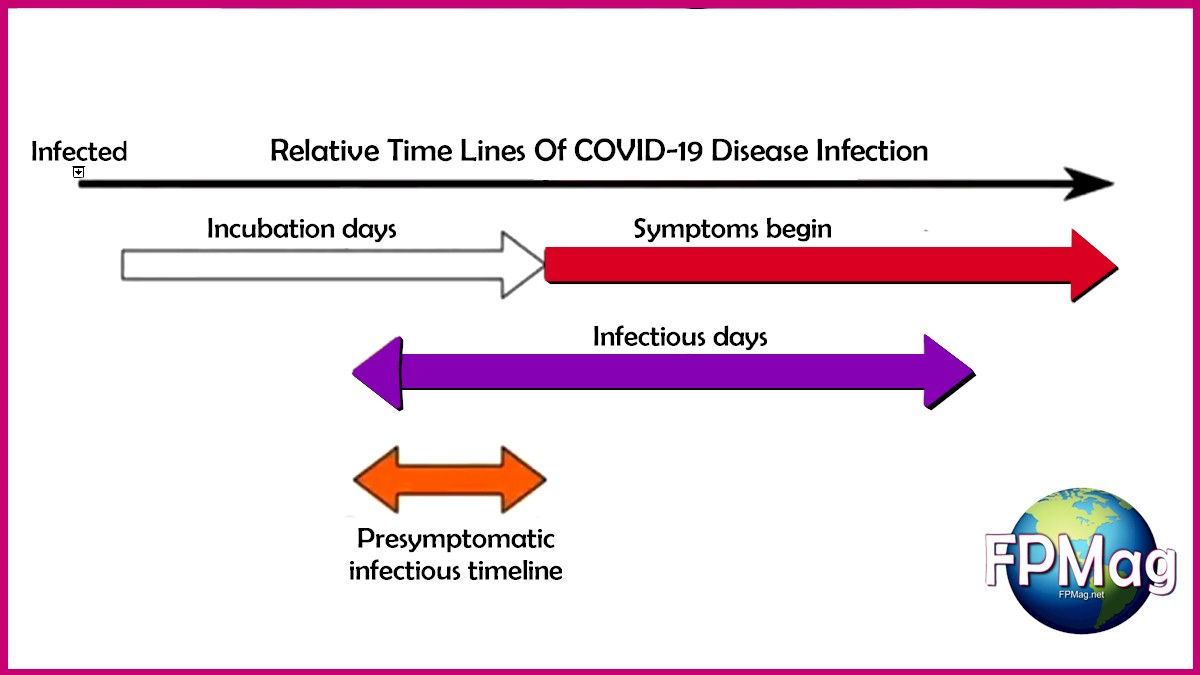 This is what the sequence should look like, not tested daily as negative until Wednesday night and then positive, next day in hospital.  Art/Cropping/Enhancement: Rosa Yamamoto FPMag

“At the Walter Reed centre Trump should be seen by a psychiatrist, to see if he is fit for duty” the doctor added,  “but not a physician.  Frankly I would not wish that on a colleague of any specialty. The poor psychiatrist might end up hanging herself. Psychopaths have every mad hatter game in their trick book to convince psychiatrists they are to blame and spin their heads around,” the war-zone trauma doctor added.

Gracie Edwards suggested Trump “drink gasoline and light up a smoke”. No love lost there.

Not soft-spoken words like those of  former Vice President Biden, but they are no less sincere for being harsh. Women generally do not like Trump or the Republicans whether they did at one time or not and even despite long family heritages of Republican Party support notes a Calais, Maine medical practitioner.

“Part of that is a scary underlying truth that more than half of the women in the world have experienced sexual violence or harassment and have come to despise that type of male,” reports Sharon Santiago who was interviewing Dr. Anderson of The RINJ Foundation.

One woman in the waiting room of a RINJ clinic, a rape survivor, when asked blurted out, “Why do you even think about writing anything about that *******. I hope he *****.”

She explained that her rape had brought her to a group counseling session wherein she met a Facebook ‘friend’ who has recounted how, when she was a young model, twenty years ago, Trump and one of his friends sexually assaulted her.

“Are you mad? What’s wrong with you media people? How can any woman vote for a man who rips babies from a mother’s arms and cages the children,” asks feminist doc, Gracie Edwards.

“It is shocking that the Trump administration continues to take babies from their parents,” said Lee Gelernt, deputy director of the ACLU’s Immigrants’ Rights Project.

“The conditions in which children are detained and the support services that are available to them are of great concern to pediatricians and other advocates for children.

“In accordance with internationally accepted rights of the child, immigrant and refugee children should be treated with dignity and respect and should not be exposed to conditions that may harm or traumatize them.

“A truth that Republicans do not like: there is no sympathy for Donald Trump among millions of women whose families have been ravaged by the ‘Trump virus’ , and it is OK to say that,” says Dorreen, a New York-based member of the RINJ Foundation women’s group.

“Putting at risk Hope Hicks, Kellyanne Conway, and Melania Trump, who all have been infected with COVID-19 is the most despicable result of this reprehensible [psychopath’s] selfish misconduct. The man is incapable of experiencing a single moment of empathy,” says Monique Deslaurier, a Maine nurse practitioner whose entire family has jumped ship from the Republican Party because of Trump.

“Did Republicans actually think they would get away with supporting a man who has been accused more than twenty times of sexually exploiting women and girls,” she asked rhetorically.

“Trump claims that he can just walk up and grab any woman’s vulva any time anywhere he wants. With that he encouraged every rapist and every kiddie diddler in America to commit sexual violence. He will go to hell for that alone.”

“One example is Mr. Trump convening a large gathering of unmasked persons to celebrate what is obviously by his conduct a fortuitous death of the beloved Ruth Bader Ginsburg and his nomination of Amy Coney Barrett,” she continued.

“What kind of person does that in the midst of a ferociously-spreading deadly disease?”

“And what kind of person is Amy Coney Barrett who brings her unprotected family into a setting that stinks of extreme risk and breaks laws and guidelines across the entire country? She is a judge? Forget it,”  Monique Deslaurier added.

“Trump brought this on by creating as President a popular culture within which it is disloyal and unpatriotic to wear a  mask”. 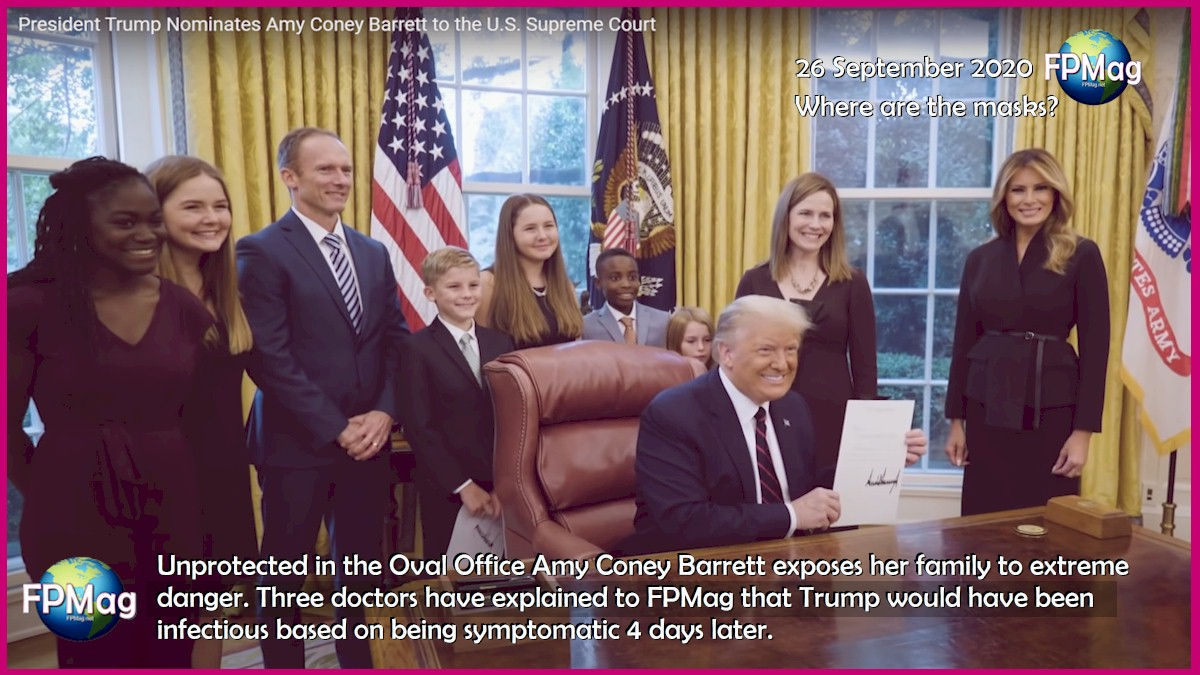 26 september 2020
Where are the masks? Unprotected in the Oval Office Amy Coney Barrett exposes her family to extreme danger. Three doctors have explained to FPMag that Trump would have been infectious based on being symptomatic 4 days later.

“Human rights are women’s rights. Trump should have that on his gravestone,” commented Gracie Edwards who graduated from Cornell in Ithaca. “And I think many people in upper New York agree. People have had enough of this evil man.”