Donald Trump has been implying Dr. Fauci endorses not wearing a mask during the current COVID-19 pandemic. It is potentially fatal advice.

This Editorial refers to Dr. Anthony Fauci rights. Dr. Fauci is the
Director of the USA National Institute of Allergy and Infectious Diseases. He has been working with scientists around the world, fighting virus epidemics for decades.

“In my nearly five decades of public service, I have never publicly endorsed any political candidate. The comments attributed to me without my permission in the GOP campaign ad were taken out of context from a broad statement I made months ago about the efforts of federal public health officials,” Fauci said in a statement provided exclusively to CNN when asked if he agreed to be featured in the ad. 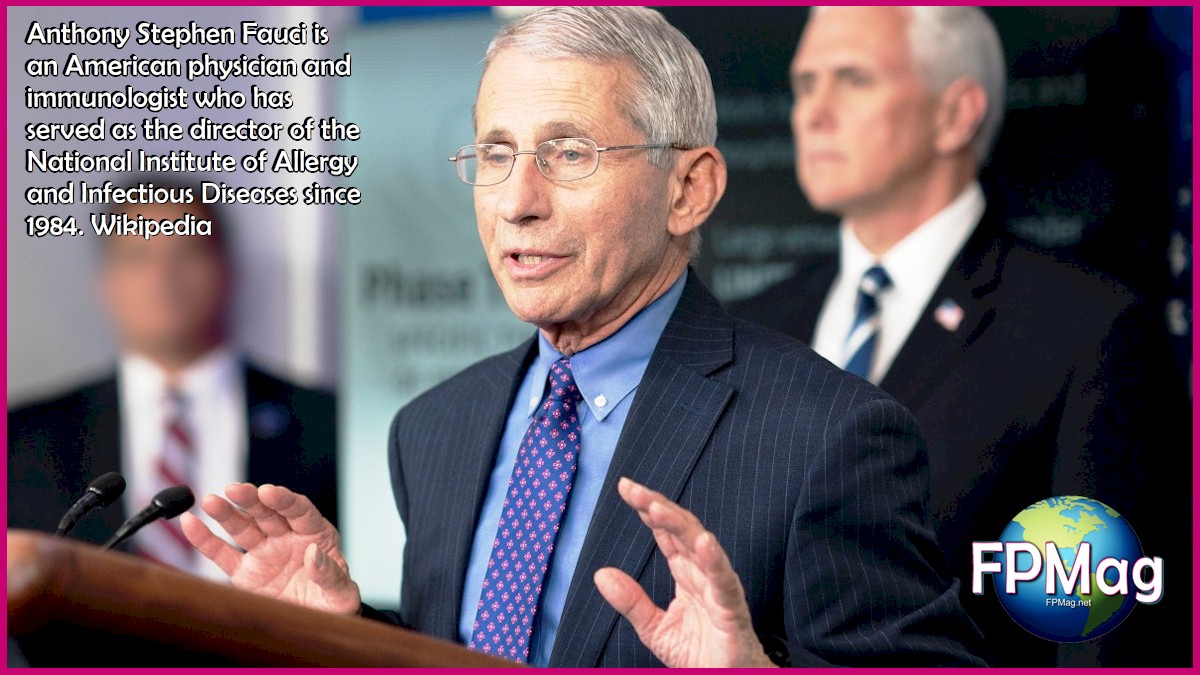 Victim of Trump fraudulent behaviour and abusive words, Anthony Stephen Fauci is an American physician and immunologist who has served as the director of the National Institute of Allergy and Infectious Diseases since 1984. Wikipedia Photo Credit: By The White House from Washington, DC – White House Coronavirus Update Briefing, Public Domain Art/Cropping/Enhancement: Rosa Yamamoto FPMag

The 30-second advertisement which is airing in Michigan, touts Trump’s personal experience with the virus and uses a quote from Fauci in an attempt to make it appear as if Fauci is praising Trump’s response. Clearly Dr. Fauci is not praising Trump. Readers can see the Fox News interview in which Dr. Fauci was speaking about his working along with others in the White House task force.

“President Trump is recovering from the coronavirus, and so is America. Together we rose to meet the challenge, protecting our seniors, getting them life-saving drugs in record time, sparing no expense.” Then appears  Dr. Fauci in which he says, “I can’t imagine that anybody could be doing more.”

The video report below prepared by the Guardian illustrates the [ed.: Trump fraud] conflict so well, FPMag shares that YouTube item below rather then producing something anew. This isn’t news as it has been well reported. The news follows the video.

The news is: Trump has not stopped the advertisement even now Dr. Fauci has asked the fraudulent component to be removed. and that speaks to character.

What is worrisome about this arrogant, deliberate fraud against Dr. Fauci is that Trump is advocating very dangerous practices that are leading to infections, illness and even death.

The advertisement implies that the head of the US government department for epidemiology is approving of reckless practices like avoiding social distancing and mask wearing.

Worse than this, fraud is a crime and in this case it is a fraud against the people of the United States.

There is a reasonable expectation given the amount of publicity, television stations know the advertisement is fraudulent. Consequently they are also violating the rights of Dr. Fauci and the rights of the American people.

What can Americans do about this?

Sue the Trump campaign and name any stations showing the fraudulent advertising that endangers the people of the United States.

Meanwhile wear a mask to be safe and stop the spread of the virus.