Hopefully tonight in two town halls, America & the world will hear what two US presidential candidates have to offer us as a plan to STOP COVID19 in America, the most infected nation on Earth.

“There is a black hole on NBC tonight. Tune in to @ABC at 8pm and watch a decent man deliver a safe way forward for this country. You can see the raging howler monkey-in-chief’s delusional and steroid fueled fails later on YouTube and, of course, all white supremacist websites,” says Jim Carrey who has been brilliantly playing the role of Joe Biden on SNL lately.

And that is a good introduction to the cacophony happening in the most COVID-19 infected place on Earth.

Tonight NBC will sneak up on its competitor ABC and smash the network and the American people in the back of the head with a con-artist propaganda blastout from Donald Trump.

“Journalism in America—where self-observation has vanished—is a weekend warrior game of partisan politics. But NBC just sunk to the lowest possible level and even its own scribes are furious,” said FPMag‘s editor.

“Listen to what Carl Bernstein and Canadian Jim Carrey have to say,” the editor added. “Both have the same impeccable moral compass.” 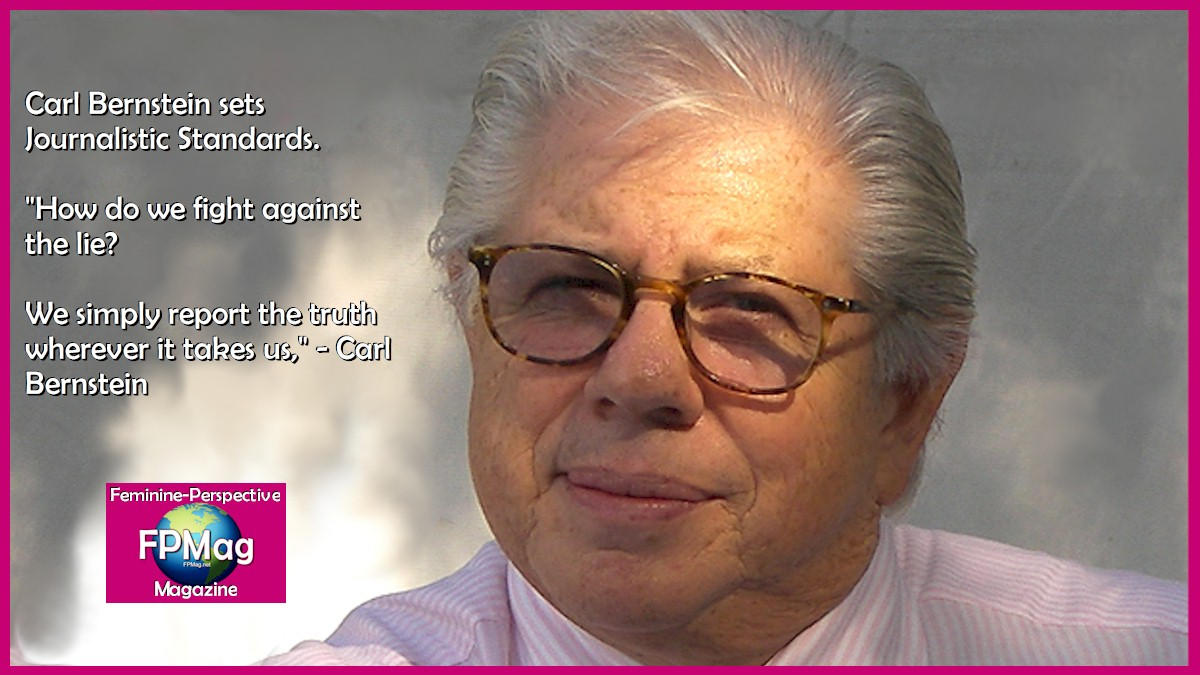 The picture and its story: Carl Bernstein sets journalistic standards. “How do we fight against the lie? We simply report the truth wherever it takes us.”

Carl Bernstein, last night, on Twitter and on CNN a little after lunch today, said, “How is it that NBC News has allowed itself to get conned by Donald Trump and (as of 11 pm Wednesday) continues to abrogate the public trust by not rescheduling or taping-and-delaying broadcast, or canceling if Trump continues to demand the network’s obeisance?”

“First Trump evades debate commission rules and protocols; then NBC allows him a town hall on equal footing with Biden, who has agreed to and followed the commission’s rules [ok, perhaps barely defensible this part];

“But inexcusably, NBC schedules its Town Hall with Trump at exact time Biden is on ABC (reportedly at Trump’s insistence), cutting Biden’s audience and setting up a ratings war tailored for Trump to win and crow about. Esp. bc ABC has no cable outlets, like MSNBC + CNBC.

“Since JFK v. Nixon, the idea of televised presidential debates [and Town Halls] is to serve the voters—not the whims or wishes of the candidates. And to get the largest possible audience of voters/viewers. Not bifurcate the audience to the obvious advantage of one candidate and capitulate to that candidate’s demands. If that candidate threatens to walk away over something like this, he should be shown the door.

“I was Washington Bureau Chief for ABC in 1980-1981 when myself and CBS/NBC bureau chiefs made decisions that neither POTUS Carter nor POTUS Reagan could get free airtime from the White House for slyly political broadcasts,” says  Carl Bernstein. 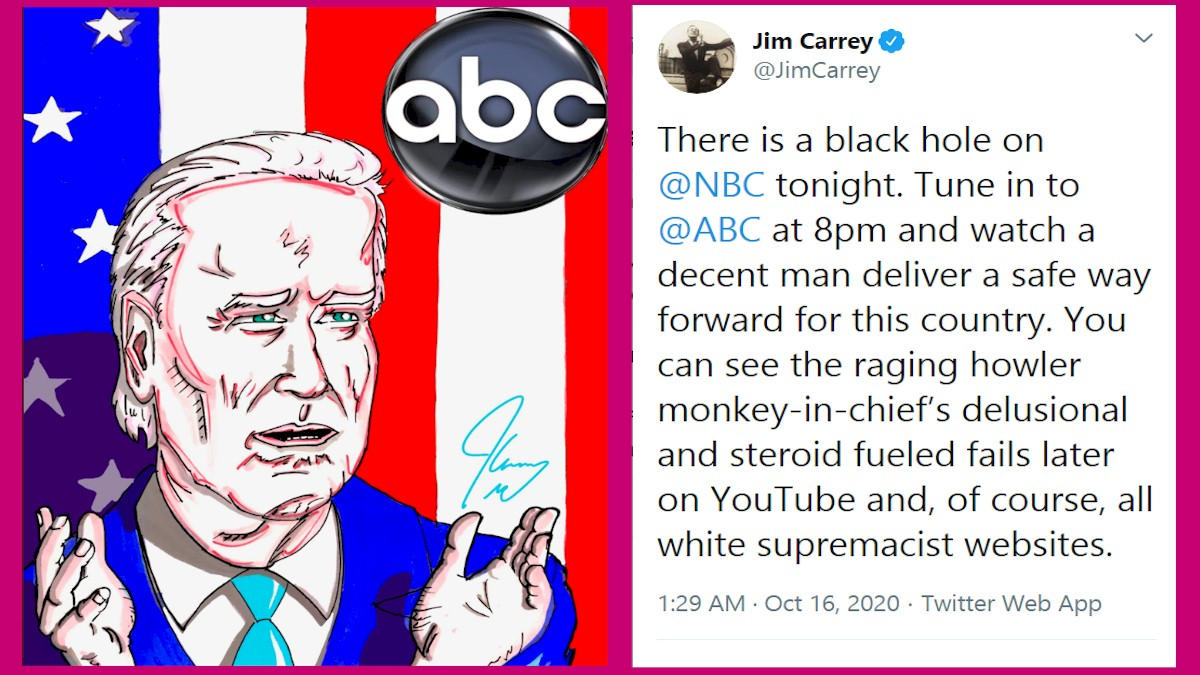 Jim Carrey
@JimCarrey
There is a black hole on NBC tonight. Tune in to @ABC at 8pm and watch a decent man deliver a safe way forward for this country. You can see the raging howler monkey-in-chief’s delusional and steroid fueled fails later on YouTube and, of course, all white supremacist websites.

As NBC screws over the American Public, active cases of COVID-19 in America are the highest in the world.

“As women, moms, try to hold American families and communities together, Trump conned NBC for a b——t blast to bypass the planned debate. America really sucks for ordinary people,” says a mom with 4 kids in Detroit.

Today the United States is the most infected nation on Earth.

In the USA a visitor is more likely to encounter an infected person than anywhere else on Earth. That includes countries with five times the United States Population, China and India have far fewer active cases.

FPMag will be talking more about ‘active cases’ through the end of October. With examples of the best and the worst conditions, readers will learn about why the Civil Society Partners for COVID-19 Solidarity sees this quantum  as an important metric for understanding the effectiveness of vaccines and non-pharmaceutical measures for mitigation of the SARS-CoV-2 pandemic.

Active confirmed and reported infections at the time of publication. See all active cases > here.

COVID-19 Around the world. Hopefully tonight, America and the world will hear what two US Presidential Candidates have to offer as plan to STOP COVID19.

Note: India's reported death sum and cured data are widely seen among epidemiologists and biostatisticians as unreliable. For example, 3,045,063 is CSPAC estimated sum of deaths while India reports 525,020, creating the largest discepency in the world. India might only report hospital tested cases. Sources among hundreds of nurses and other medical practitioners provide a picture that in summary concludes most cases never present in a hospital especially in northern provinces where health care is less available and utilization is low anyway because of poverty, hence most people die at home in India. This theory could explain discrepancies between reported data and algorithmic estimates. 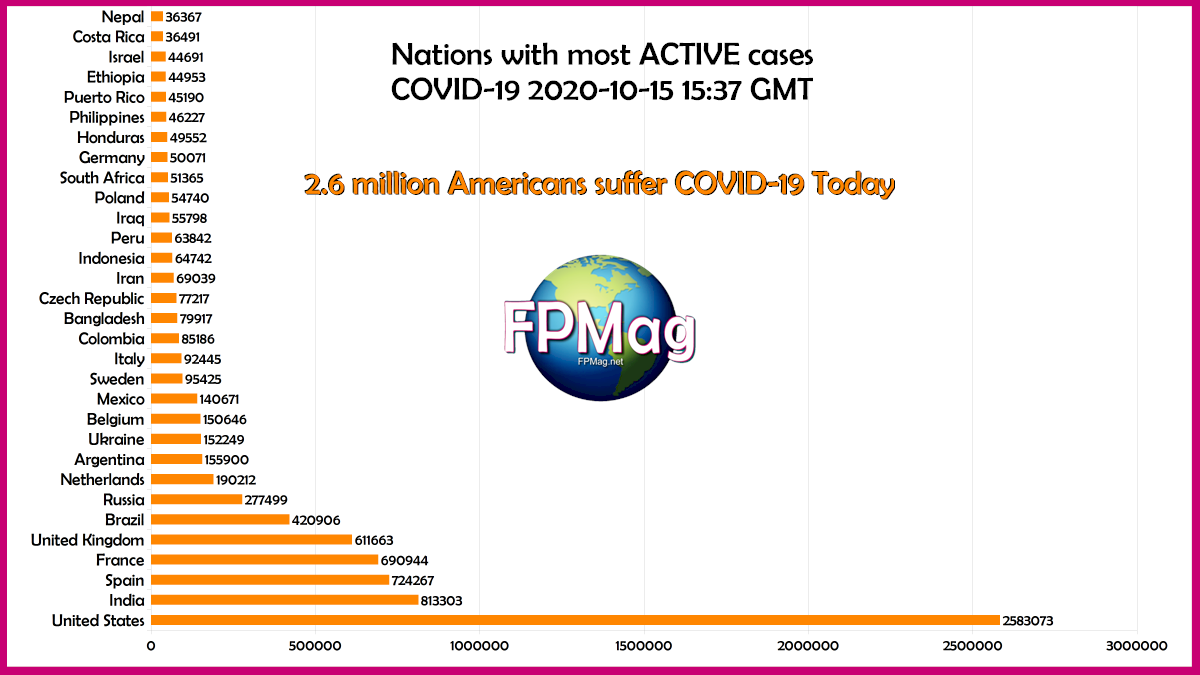 FPMag Correspondent says a bipartisan relief bill is a more urgent need than anything in the headlines today.

“Today Three Midwest Governors have tossed out parochialism to demand that Washington DC begin to focus on the needs of the American people,” reports Monique Deslauriers for FPMag in Calais, Maine.

“The coronavirus is more than a public health emergency, it is also a continuing economic crisis for the residents and businesses in our states,” the governors said. “The coronavirus knows no state lines and prioritizing the health of our workers and residents is critical. Yet, as we continue our efforts to contain the virus and mitigate its economic fallout, we confront both declining state budget revenue and the looming cutoff of the federal Coronavirus Relief Fund (CRF) dollars that have been critical to our states’ pandemic response plans and economic relief programs.We implore you to put differences aside and agree to another, much-needed COVID-19 relief bill.” —Governors Gretchen Whitmer (MI), Tony Evers (WI), and Tim Walz (MN)

The governors also stressed the importance of ensuring funding for testing, PPE, and contact tracing.

“We would be remiss if we did not specifically point to the need for additional investment in testing, personal protective equipment, and contact tracing.

“Without continued federal investment, these programs face imminent end-of-year reductions or even closures.

Governors step up urging for additional stimulus for residents

“We urge you to take immediate action on additional stimulus for our residents, industries, and state and local governments. Investment in these efforts will not only allow us to dampen the economic fallout of this crisis in our states and slow a potential recession in the coming years, but ultimately, will also allow our residents to return to the new normal once this crisis has passed.”

The Good News today is that there are many nations and regions which have either no active cases at all or less than 100. This means that others can achieve this good outcome as well.

FPMag will be talking more about ‘active cases‘ in future articles. With examples of the best and the worst conditions, readers will learn why the Civil Society Partners for COVID-19 Solidarity sees this quantum  as an important metric for understanding the effectiveness of vaccines and the results of non-pharmaceutical measures for mitigation of the SARS-CoV-2 pandemic.